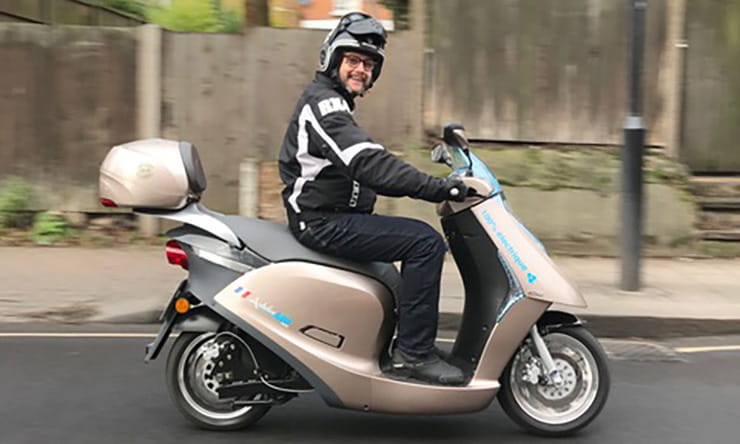 As I walk up to the Artelec (the French manufacturer) there’s nothing to suggest that it’s not an ordinary scooter. The styling of the 470 can at best be described as traditional, not in a retro kinda way but traditional in a more contemporary scooter kinda way.

It seems to me that the ECCity 50, as it’s more easily known, is quite happy and maybe even proud to be scooter and why not, it does everything a scooter should do very well. Its good at being a scooter, and the chunky but chic styling has grown on me - I have to admit I have become rather fond of the way this little scooters looks. 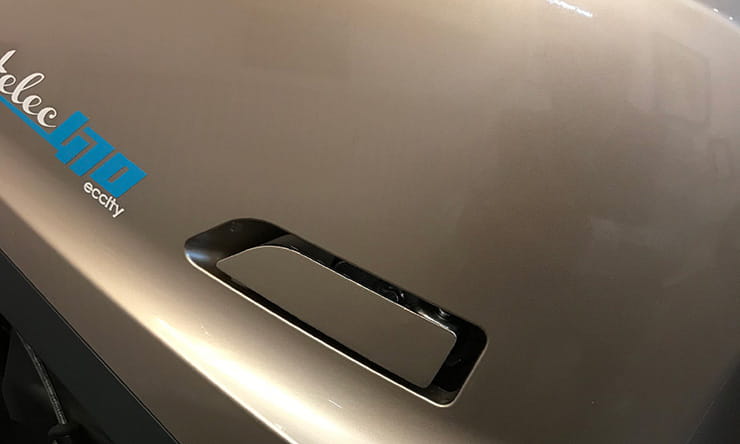 As you get closer it becomes clear that this is a premium product, no flimsy cheap plastic

here just the good quality stuff and lots of it, all finished in what ECCity call Champagne (that’s brown to you and me) and you know what? The colour actually suits this little bike,

they have even taken the time and care to paint the wing mirrors and the top box in brown, sorry I mean Champagne, too and not forgetting the rather cool pillion foot pegs that folds into the body work and disappear almost like a Teslar’s door handles (almost). 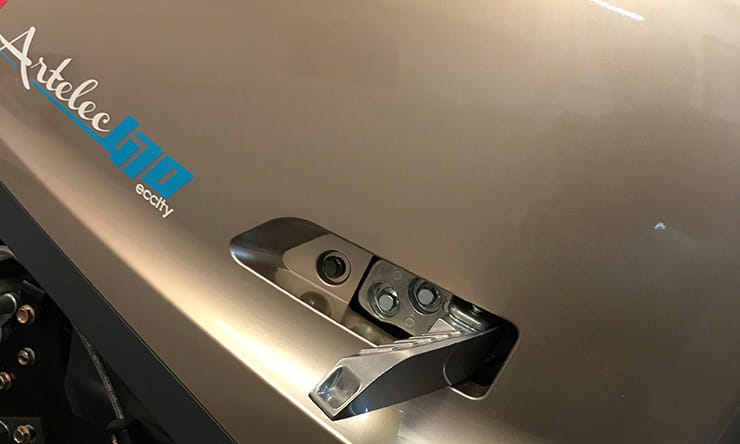 The ECCity sits on a set of very stylish 13inch wheels - they are of the more solid kind and look like they’ve come straight off a Citroen CX Turbo from the mid 90s, very French. A nice little touch - the stopping power comes from 220mm disk brakes with double piston callipers both front and rear it’s all very impressive and gives great stopping power with enough feel to always come to a safe stop.

The seat is very wide, a bit too wide for my liking but never-the-less comfortable, comfortable enough even for the longest of journeys or days where I was in the saddle the whole day and the riding position will be very familiar to anyone who’s ever ridden a traditional scooter so that means very comfortable in that familiar body upright, legs forward almost like your sitting on a chair kinda way, this is however where the similarities to a normal scooter ends and things start to get a little strange. 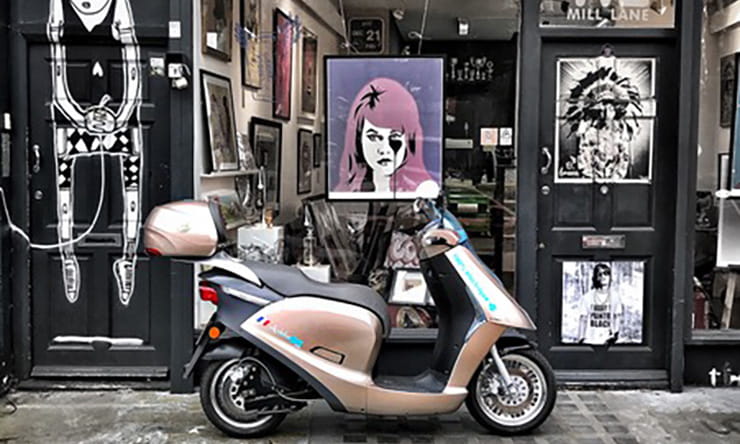 Turn the surprisingly flimsy keys (I never did get used to it) and you get the first sign that this is no ordinary scooter because the only thing that happens is a little green light comes on under the funky Jetson-style space-age digital dashboard hmm…it is now apparently ready to go.

Twist the throttle and under its champagne coloured body work you are now sending tiny little lithium ions from the negative side of the German built Samsung battery back across the electrolyte to the positive electrode, thus producing the current that carries the electrons from the battery to a set of floating magnets located inside the back wheel. This creates a rotating magnetic field causing the motor to spin, turning potential energy into kinetic energy thus propelling the little scooter forward or at least I think that’s how it works, I could be wrong. 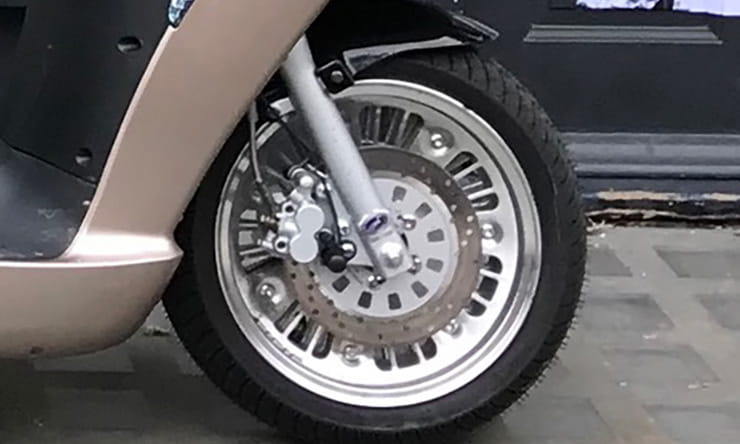 Right…! Having established that this bike in fact runs on witchcraft and black magic and having also established that I have no idea how the witchcraft that is electricity or the black magic of ions actually works we can move on to what I DO know and that is - electricity is a great way to propel certain vehicles, take for example the bullet train or bumper cars, two fantastic examples where electricity works better than the internal combustion engine.

Now I know that the ECCity 50 is neither a bumper car nor is it a bullet train but could scooters be another example where electricity trumps the petrol engine perhaps? 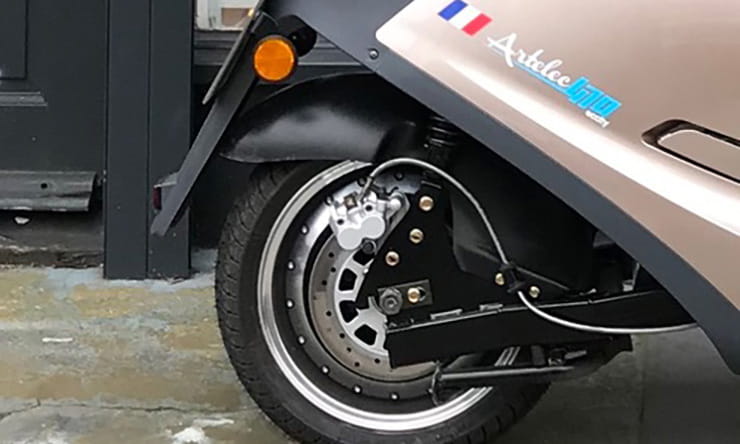 The Artelec is off to a great start, twist the chunky throttle and because of the unique way an electric motor works you get all of the power and all of the torque instantly, this soon becomes very addictive and it never failed to put a smile on my face to out-accelerate pizza delivery guys at the lights or silently sneak up on an unsuspecting tourist on a Boris Bikes because the ECCity 50’s 4000w is equivalent of a 50cc petrol engine so it soon runs out of puff around about the 35mph mark so you have to pick your fights carefully. Surprisingly, well, surprising to me at least is how unlike a conventional 50cc scooter the acceleration, speed and handling seemed. It was completely unaffected by weight even with its own rather hefty 150kg start weight plus two passengers fully loaded with heavy camera equipment. You really can load this thing up it has a massive storage compartment under the seat, two smaller ones in the front fairing with a usb port and a fairly large top box out back, if anything the handling seem to improve with the extra weight. 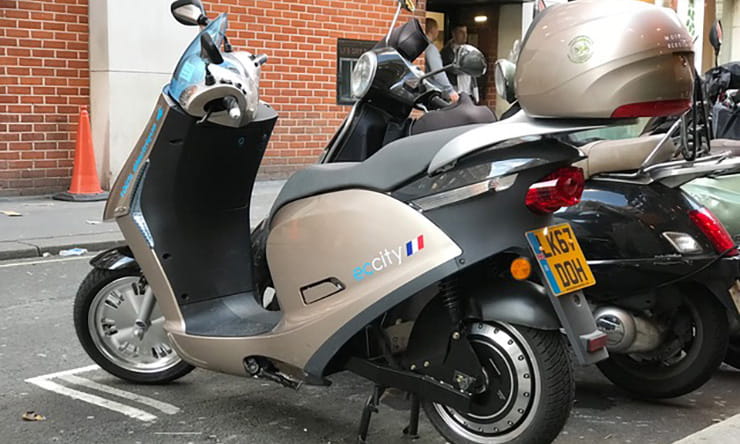 It could not be easier to charge the Artelec under the seat you will find a 2-metre long lead with conventional plug at the end of that you simply pop in to a domestic wall socket at home or at the office. You can get a converter lead so you can charge it at the road side charging points but why bother the little scooter really isn’t very power hungry; the official figures are 9 hours of charges will give you a 75-mile range. Now what does that mean in the real world? Well leave it on charge overnight, go to bed and hey presto its fully charged in the morning and that will realistically give you more range to you can possibly use in a day. It’s all virtually free, well around 20p to 50p depending on who you ask and what energy deal you’re on but that’s cheap in anyones book. Maintenance costs are almost non-existent, all you need is tyres and brake pads and the battery will last well over 30,000 miles.

So, the build quality is excellent and its good looking (for a scooter at least), it’s well equipped and fun to ride (again for a scooter), practical with plenty of storage, it’s comfortable enough to ride all day and it does all of this with virtually no running costs so it’s a no brainer right we should all rush out and buy a ECCity 50. Right?

Well I’m afraid not because there are a few problems and they are rather big problems. The first problem is that there is no way of locking or securing the Artlec. The back wheel is solid because the electric motor lives in there so you obviously can’t lock that and the front wheel is just solid enough so you can’t put any kind of chain through and therefore are unable to lock that. The holes in the disk brakes are just too small for any disk lock to fit on to it, so your only lock is the flimsy steering lock which is simply not good enough, especially not here in London. 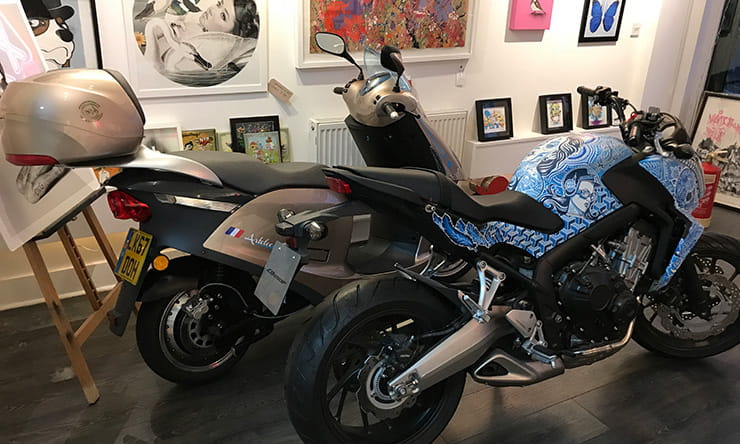 But the real elephant in the room is the £6,495 price tag, that’s an eye-watering amount of money for something that can only do 35mph, I know that all electric vehicles are expensive and I know roughly half of that price is the lithium-ion battery from Samsung and I also know you will get a government grant of roughly £1500 but that still leaves £3,247. That’s still a grand more than most 50cc petrol mopeds, I’m not sure that people who will buy a ECCity 50 are the same people who buy 50cc mopeds but one thing I am sure about is that I’m going to miss the little Artelec and its witchcraft and black magic fun.

Visit Dan at either of two London-based tattoo and art studios: Monsters of Art or Tattoo Shop by Dan Gold 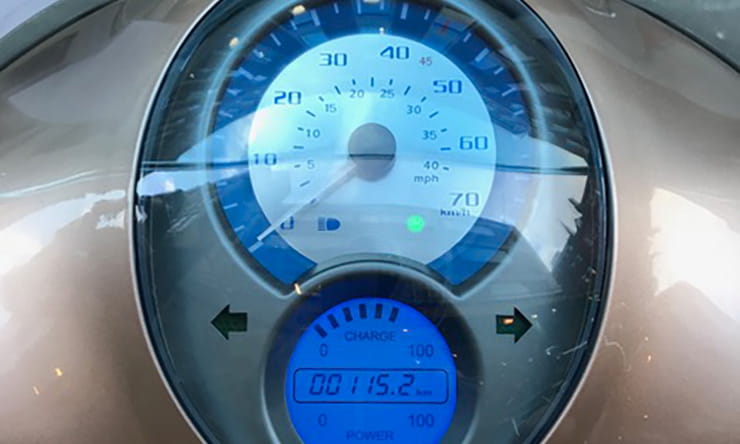