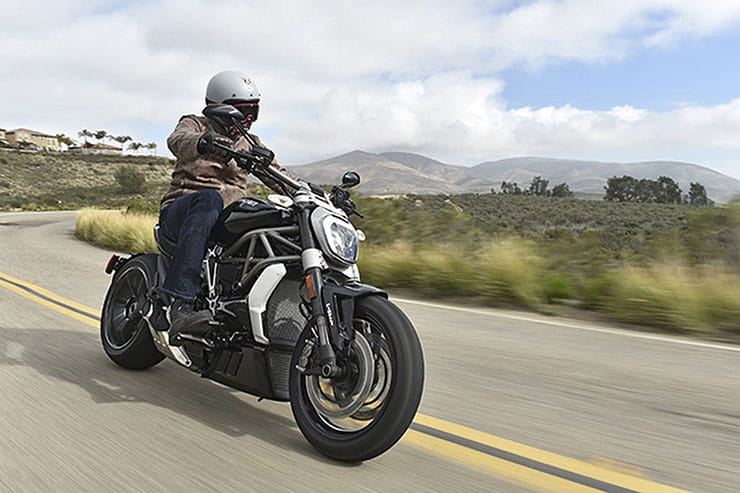 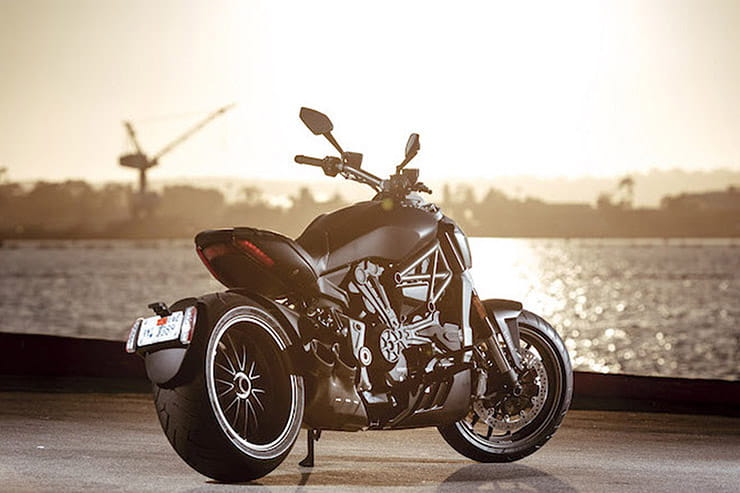 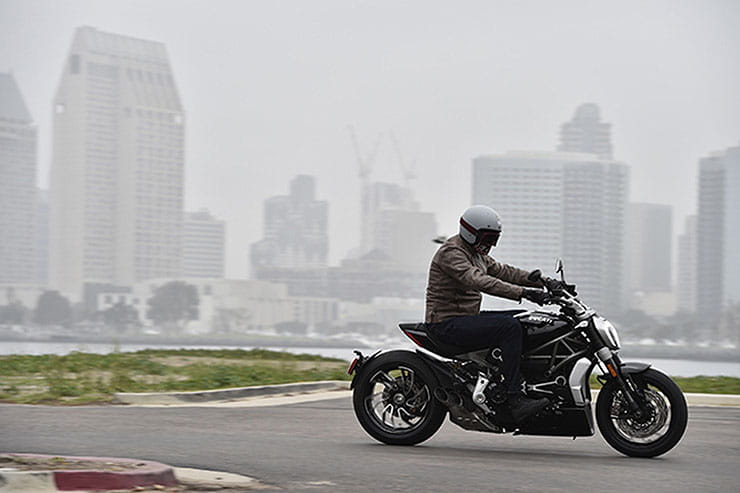 Launched five years after Ducati’s first take on the cruiser/muscle bike genre, the Diavel, in 2011, the XDiavel is much more than just a ‘more extreme’ Diavel – it’s a whole new, more cruiser-orientated machine with a different engine, chassis, belt instead of chain drive, and more laid-back, feet forward ergonomics.

It was created specifically to appeal to the American cruiser market – which is also why its world press launch took place in San Diego, California – where the Diavel was considered too much of a sporty muscle bike to appeal to cruiser types.

But although the XDiavel is even more ‘cruiser’ (only the rear tyre and part of the name are shared with the Diavel it doesn’t mean Ducati has gone soft. The XDiavel also features a massive 240mm rear tyre and launch control along with styling that just stepped off the drag strip and a variable valve timing engine.

As a result, the XDiavel handles and stops almost as well as any Ducati you’ve ever ridden, yet still lets you chug along should you wish with your feet hanging in the breeze up front. While if you want even more, the higher spec XDiavel S features gorgeous, unique wheels, specially coated forks and detailed engine, higher spec brakes, running lights and more to make Ducati’s cruiser even more special.

When new, the XDiavel S was a hefty £18,395, although for that, apart from all the performance and tech, you also got a higher specification plus a sumptuous finish including aluminium detailing on the motor and special wheels.

On the cheaper £15,795 XDiavel it’s pretty much the same spec mechanically but there’s matt paint on the tank and engine, a painted swing arm, less bling wheels and the same 50mm Marzocchi fully-adjustable forks but no Diamond Like Coating as on the S. It also replaces the S version’s top-line Brembo M50 brake calipers for slightly lower-spec, but still good, M4 32 front calipers. Both get full LED lighting front and rear but the S gets a Daytime Driving light to give it that distinctive look so you instantly know it’s an X-Diavel S.

Whichever you ride the electronics packages are the same, they all get launch control, the standard riding position is the same and it all hangs off that new 1262cc DVT (Ducati Variable Timing) Testastretta motor. 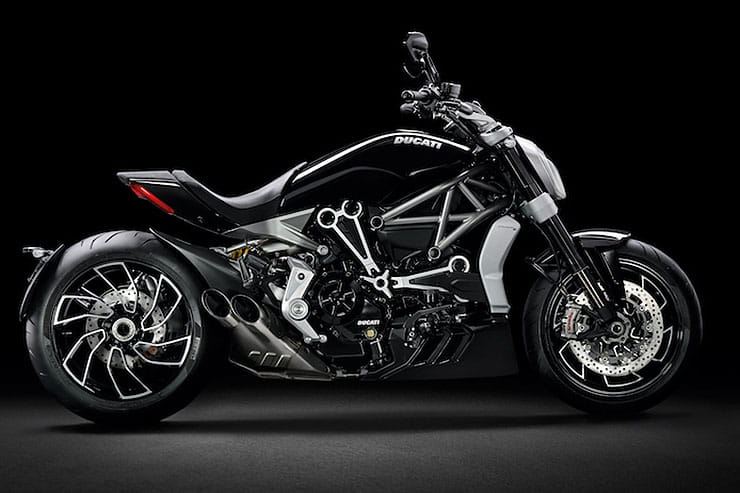 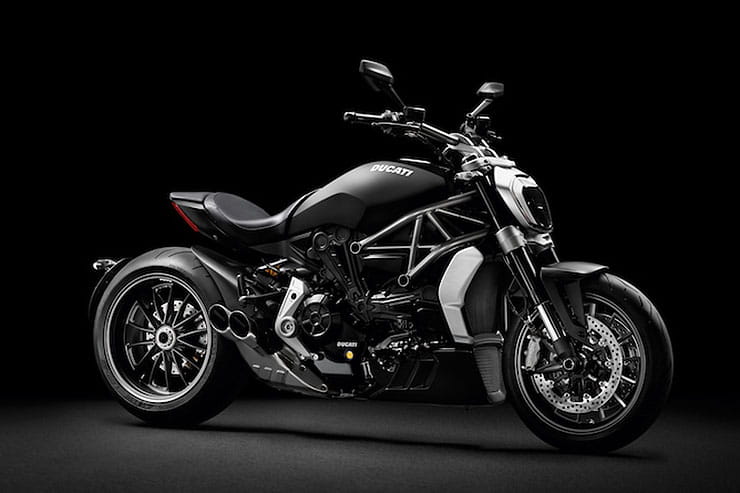 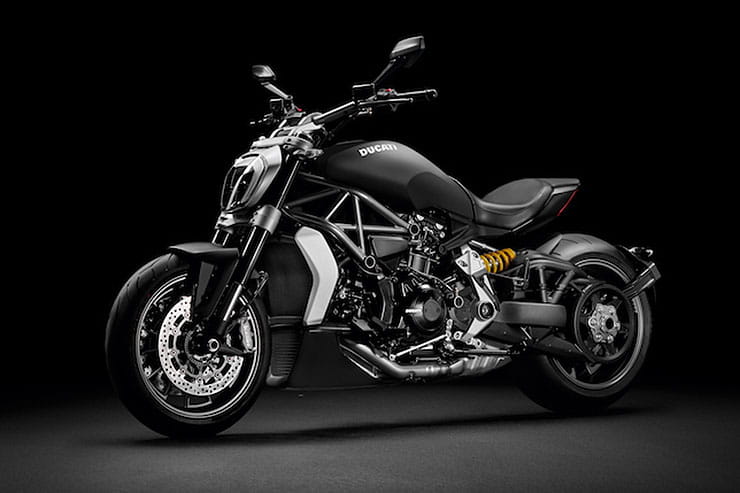 In terms of performance, the XDiavel blows all 2016 cruiser rivals into a dust cloud in every possible way.

When you first gas the XDiavel it takes you by surprise. The whole thing lights up. All the electronics suddenly wake up from their slumber and take things into hand.

From 3000rpm to 7000rpm the motor making so much torque that you never need to rev it. Just hook a gear higher and let the motor’s mid-range do the work. The massive 240-section rear Pirelli fights for traction, the front-wheel leaves the ground through first and second and it’s a blaze of thunder, revs and 156bhp as electronic controls trying to stop you firing yourself of the back of the deep-stepped seat.

In Urban mode it turns the power down to 100bhp, the ABS is cranked up and the traction control set near maximum. The power is muted but it’s gentle and enough for town and takes some of the fierceness out of the engine.

In Sport mode where you get the full ponies and the more aggressive fuel map. While Touring mode gives the same power but numbs it all slightly.

The XDiavel’s 1262cc motor might be loosely based on the variable valve timing 1200 engine and system used on the Ducati Multistrada 1200S. But, for the low-revving cruiser nature the motor has been given a thorough overhaul with a stroke of 106 x 71.5mm compared to the 106 x 67.9mm of the 1200 lump on the Multi. It's essentially an all-new motor and one which had Ducati engineers more used to working on high-revving sports bikes using every bit of their talent to turn into a cruiser motor

It also has a higher compression ratio (13:1 instead of 12.5:1 on the Multi) and different crank. But it does share the Bosch electronics injection system and elliptical 56mm throttle bodies. It also uses ride by wire throttle and gets a new cylinder head which can be bolted to the frame, which the footrests hang off too.

The variable valve train system also features two spark plugs per cylinder and a secondary air system which brings fresh air into the exhaust duct to complete oxidisation of unburned hydrocarbons and reduces the level of pollutants.

Styling wise, the motor has a repositioned water pump between the cylinders for a more aesthetically pleasing look.

There’s a six-speed gearbox with wet slipper clutch and Ducati’s first-ever belt drive. Service intervals are 9000 miles or once a year for minor, and 18,000 miles for valve timing adjustment and a more major service.

Noise and emissions controls may have done their best to kill any sound coming out of bikes but the XDiavel even sounds good too. The induction noise giving it a nice deep bark and grumble from those slash-cut twin exhaust side pipes. 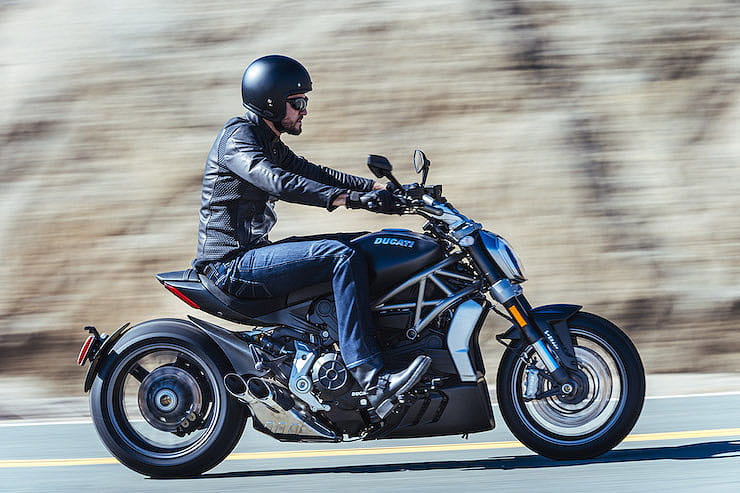 Although a cruiser, the XDiavel is also a high tech, high performance one so economy isn’t really its forte. That said, its motor has also been retuned and many owners are likely to ride it lower in the revs than with a sportsbike so that helps fuel consumption. We’d expect mpgs in the high 40s which, with the 18-litre fuel tank, should return a reasonable range approaching 180 miles.

That 240-section rear tyre dominates the XDiavel’s dragster-come-cruiser vibe and is a major feature of the bike in the same way it was for the Diavel. On the XDiavel there’s 14-spoke wheels, the XDiavel S gets bling 12-spoke machined alloy rims. The rear is a 17-inch by 8” wheel with that 240/45 x 17 rear and at the front there’s a 120/70 x 17 front. Both versions came with Pirelli Diablo Rosso II tyres.

Front forks on the standard bike are 50mm Marzocchi forks with black anodised sleeves. The S gets Diamond Like Coating (DLC) Both feature rebound, compression and pre-load adjustment. At the rear there’s a Sachs monoshock adjustable for pre-load, rebound and compression on a progressive linkage system.

The shock and forks are firm but it means when you wind up the wick a bit the bike loves it. The long, kicked out front rake of 30 degrees with a trail of 130mm means the front wheel feels along way away from the rider but gives you a decent amount of feedback. I certainly didn’t have any issues with the handling and the rear always bites hard and gives you decent feedback.

That massive rear tyre might convince you otherwise, but you can genuinely get the thing healed over to a claimed 40 degrees and ground clearance isn’t an issue. 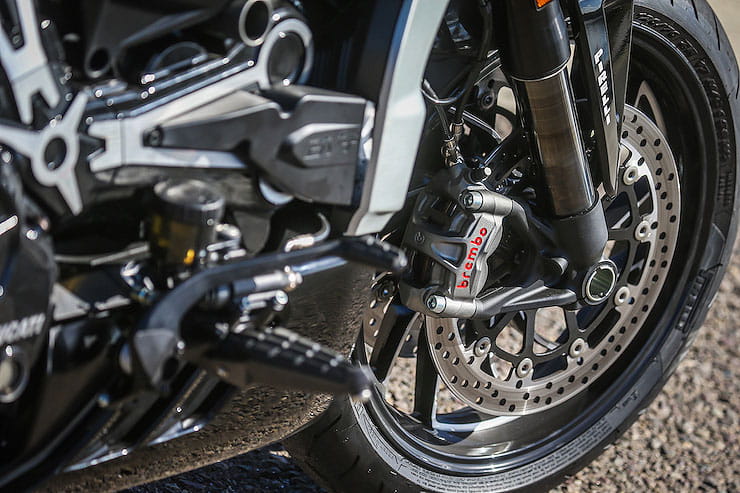 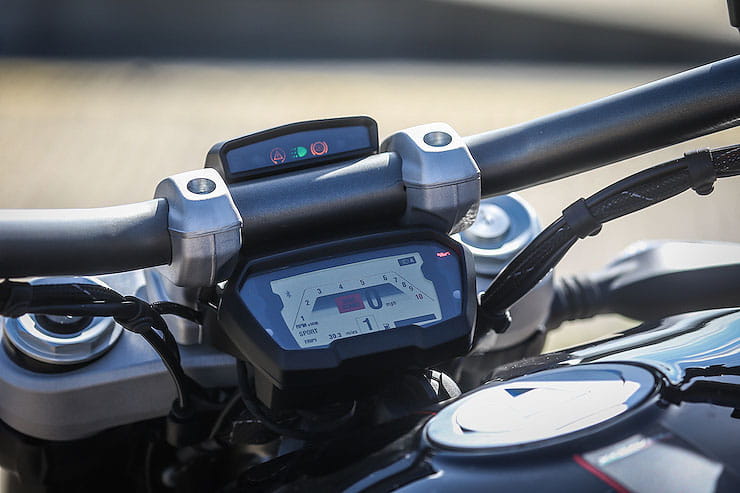 They both also come with the Bosch-powered cornering ABS, a system that lets you brake hard up to the apex of a corner at full lean and miraculously stops you crashing.

And if the stopping power they provide is good on the cheaper XDiavel, on the S it has way more brake than you will ever need. These are the same brake calipers fitted to the track ready 1299 Panigale S and are some of the finest kit money can buy. On the XDiavel that long, low vibe means you can pin it without ever worrying the ABS.

The seat is low slung at 29.5 inches (755mm) the handlebars are fat, high, wide and there's a stretch to them. You ride the bike hunched. All LA gangsta. Feet forward in the breeze, your knees out flapping. But it's comfortable, too.

The seat has a high back to stop you firing off the back when that torque kicks in. The footrests can be adjusted three ways and there are a variety of seats and bars available to adjust the bike 60 different ways via four different footrest positions, five different seats and three different handlebars. Add in adjustable foot pegs that can be moved forward or back by 22.5mm either way, or opt for optional Ducati Performance pegs to give a racier riding position. Different bars with 25mm back or 25mm further forward options are also available, along with higher and lower seats, a more luxurious seat and even different options for the pillion, which is probably a good idea as the standard item is one of the smallest ever fitted to a bike and feels like you’re slipping backwards before pulling away.

Like the Ducati 1299S and Multistrada 1200S before it, the Diavel X also uses the Bosch IMU which measures speed, lean angle, roll and pitch under braking, cornering and acceleration, and allows the bike to run three different riding modes (Sport, Tour and Urban) and adjusts the level of traction control, and cornering ABS settings depending on different modes.

It also has three-way adjustable launch control while keyless ignition means the key sits in your pocket to keep the dash clean. The switch gear is back-lit red and glows menacingly in the early morning gloom, the dash is a tiny full-colour TFT screen with a rev-counter, speedo and the usual array of Ducati tech adjustable from within including power modes to cornering ABS settings, traction control settings and Bluetooth hands-free. It may be a cruiser but nobody has skimped on spec and close-up the detailing is incredible. There’s also a huge range of cosmetic, performance and practical accessories available and it’s fair to say the XDiavel is better finished than any Ducati before it. 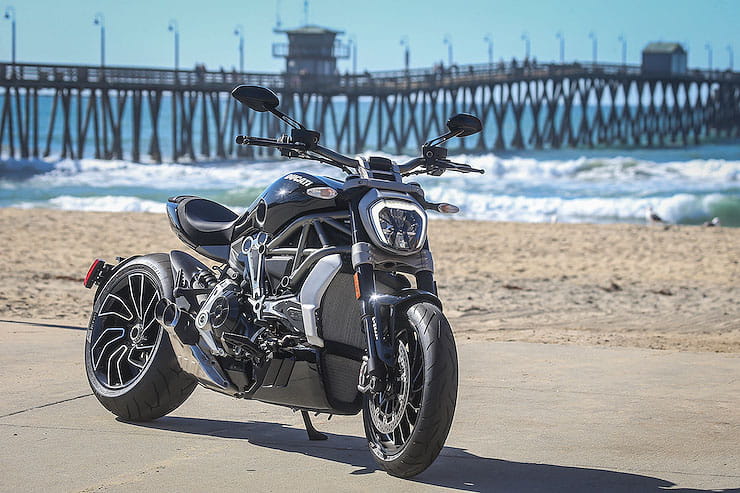 It may have been a bold step for Ducati to build a cruiser but it’s one that has paid off. The XDiavel is one hell of a motorcycle.

Not your average cruiser, the XDiavel is what Ducati call a ‘Technocruiser’ – a mash-up of a cruiser with dragster performance and the styling from a futuristic world of mechanics.

It can be ridden fast, with an engine that will pull hard all the way to the 10,000rpm. But you also rarely need to go beyond 7000rpm. You can kick back, let the world roll past and that engine does more at lower revs than you thought possible. It also handles almost as well as Monster but with more style, presence and panache.

The XDiavel is way more than a cruiser. It looks like it was dropped out of the future and is one of the coolest looking motorcycles anyone has ever produced. It’s comfortable, hilariously fast and handles. And it’s one very special Ducati.


Three things we love about the XDiavel…