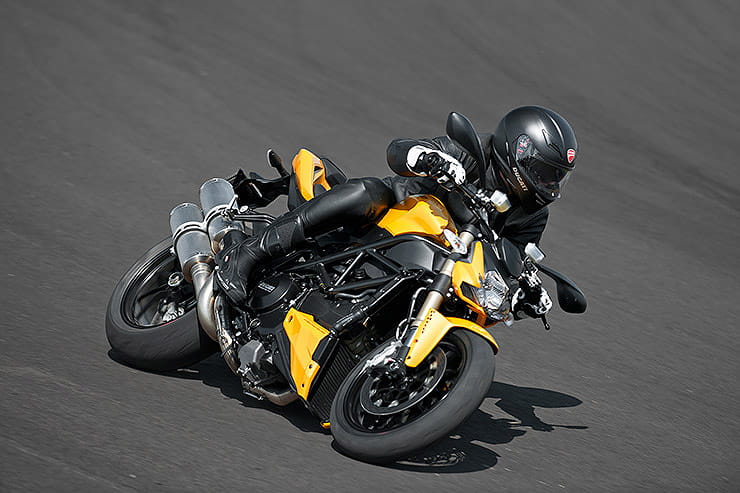 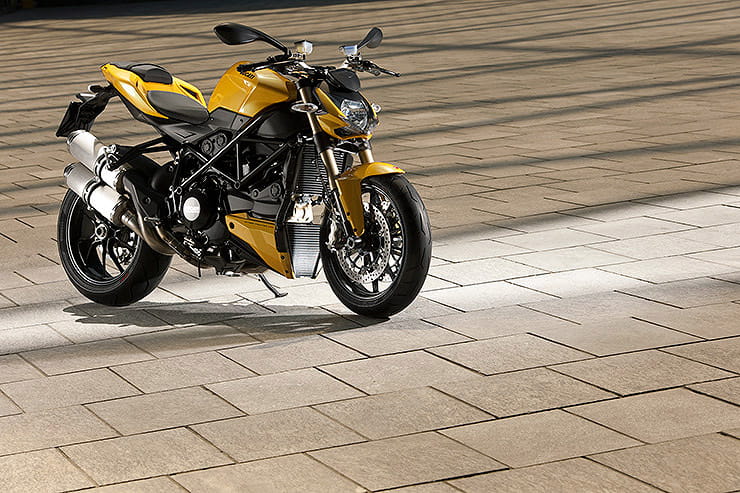 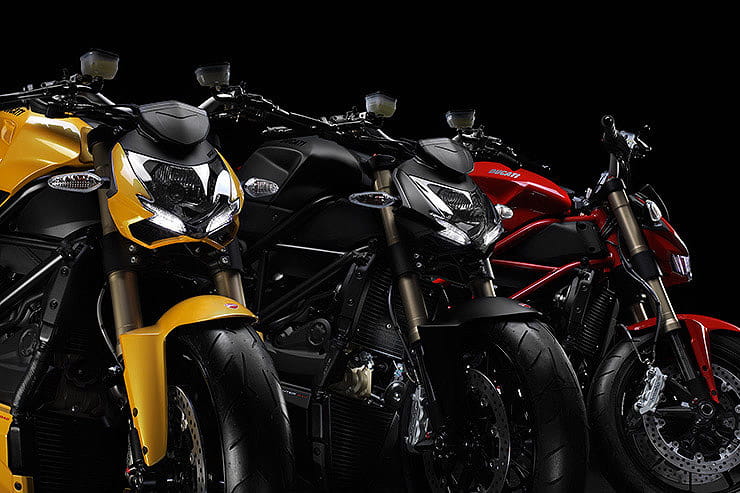 After the Streetfighter 1100 was launched in 2009, two years later Ducati followed it up with a smaller version based around the 848’s motor. Mimicking its bigger brother’s looks, frustratingly for Ducati the 848 also followed the same rather flat sales trajectory. What had they done wrong? On paper both Streetfighter models should have worked as they were proven superbike engines housed in naked bike chassis and the reviews were generally positive. But buyers voted with their wallets and after four short years the Streetfighter 848 was discontinued. Considering how excited we all are about the launch of the new Streetfighter V4, it seems remarkable that Ducati’s first range of V-twin Streetfighter models were such a relative sales flop. Could interest in the V4 revive the popularity of the V-twin Streetfighters? Now’s probably the time to buy Ducati’s middleweight naked bike before prices start to rise…

The issue with the Streetfighter 848 right from its outset was price and a new RRP for a ‘middleweight naked bike’ of over £10,000 certainly harmed sales, especially when you compared it to its Japanese rivals, which all cost far less. Nowadays this high RRP continues to be reflected in the used prices and you need to spend upwards of £5000 in a private sale and closer to £6000 from a dealer. The good news is that very few have huge mileages with anything over 20,000 rare but that is still quite an outlay for a bike that, let’s be honest, is over eight years old and not even that popular to start with. 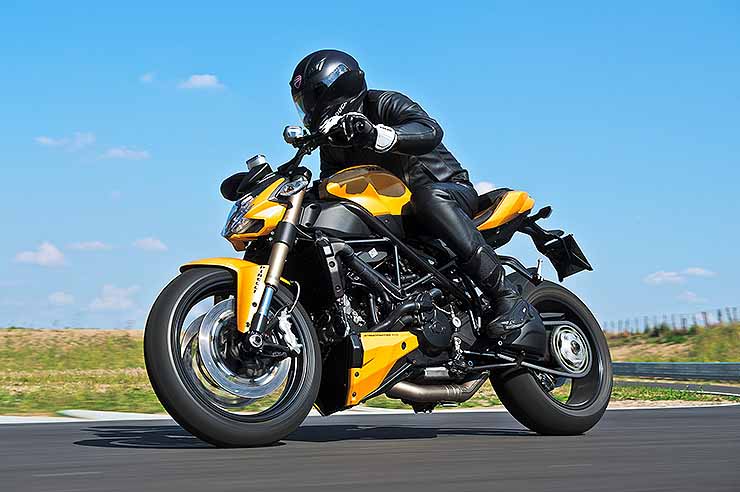 The Streetfighter uses a version of the 848 sportsbike’s Testastretta engine with ‘cam timing solutions learnt from the Multistrada and Diavel’ that sees its valve angle at 11-degrees rather than the 848’s 37-degrees. Where on most nakeds the dreaded ‘re-tuned for more midrange’ equates to ‘had all the life sucked out of it’ the Streetfighter’s motor still makes a very respectable 132bhp with 69.5lb-ft, which is only very marginally less than the first (non-Evo) generation of 848. A fairly chilled-out engine to use, it is far from a wheelie-beast but this suits the bike’s target audience where the 1100 over-steps the mark and is way too wild for most. A lovely motor for relaxed road riding low in the rev range, it suits the 848’s naked styling and has a strong mid-range once you get over the initial V-twin stutter and clatter. It’s not ballistic-fast, but it is smooth and deceptively quick.

The 848 has a very good reputation for reliability with faults few and far between but service schedules do need to be adhered to. It requires a service every 7500 miles (or one year) and belts every two years with valve clearances (the desmo service) checked at 15,000 miles and not on a time frame as with the 916-style Testastretta motor, which helps to reduce costs. The gearbox is super-slick and again fault-free but the exhaust does throw up a few issues. As well as being disappointingly quiet as standard, the placement of the twin stacked pipes can get in the way of your right foot, meaning riding on the balls of your feet can result in your boot becoming stuck to the hot pipes. Swapping them for aftermarket items does help as getting shot of the cats reduces their temperature slightly but this is quite costly with Termi units costing upwards of £700 new. There are cheaper alternatives but you are still looking at upwards of £500 as they are a twin system. And that’s before you junk the hefty collector box. 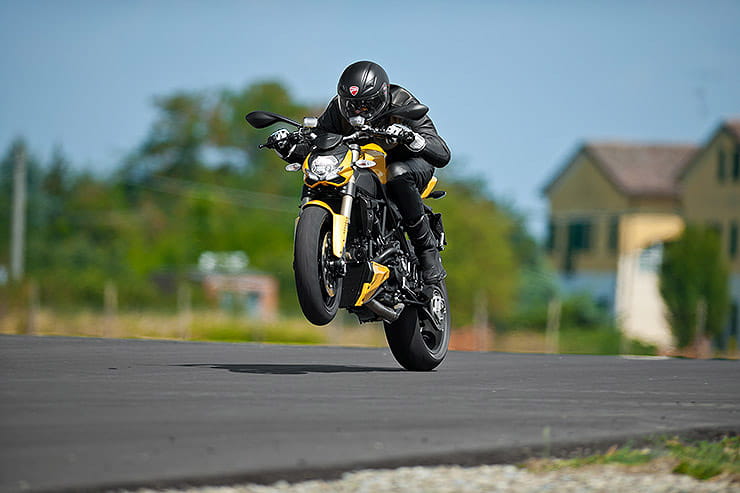 As the Streetfighter is quite exposed fuel economy can suffer and owners report mid-30mpg figures for day-to-day riding, which isn’t great. Junking the cats and getting it re-mapped can improve this as the motor is quite strangled by emissions regulations, but you will only push it up a few mpg at best.

Boasting a chassis with the same rake and trail as the 848 sportsbike, the Streetfighter is an agile handling bike that can most certainly cut it on a spirited A&B road blast. A longer wheelbase than the sportsbike makes the Streetfighter feel more stable and slightly less sharp to turn, however this feeling is off-set quite a lot by the fact you have nice big bars to help you lever it into bends rather than tiny clip-ons. The fully-adjustable Marzocchi forks deliver a good ride quality and there is little to complain about when it comes to the Sachs shock either. Much like the 848, the Streetfighter feels a really well balanced bike to ride and aside from a slightly high 840mm seat height (which feels lower thanks to the bike’s narrow waist) it should suit most riders. As with any single sided swingarmed bike, ensure the rear hub isn’t seized or deformed through over-tightened pinch-bolts, but on the Streetfighter also look out for dinged wheel rims as they are a very lightweight construction.

Although lacking ABS (it was never an option) you do get some rather impressive Brembo four-piston radial calipers on the Streetfighter as well as braided lines. They are a touch lacking in finesse due to the braided lines and don’t have a great deal in the way of give or feel if you are used to rubber hoses, but when the pace ups they perform very well indeed. 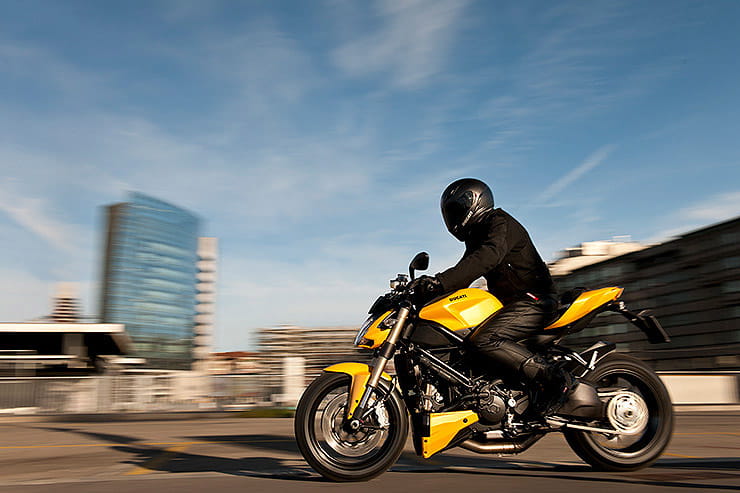 The Streetfighter is a sit-up-and-beg naked bike and while comfortable in terms of its riding position, the windblast soon starts to test your neck muscles when at a constant higher speed. A top tip is to raise the bars by 10mm, which makes the riding position a touch more relaxed and comfortable. A few companies sell aftermarket screens, but they look out of place. One major negative point is the seat, which is rock hard and will see you squirming in discomfort within 70 miles – change it asap!

Traction control comes as standard on the Streetfighter and while it isn’t IMU-linked and therefore lacks angle-sensitivity, it does have eight levels of interference you can select from. The dash is a pretty standard LCD unit (which is known to let a bit of water in, so check for misting) and lacks a gear indicator, which is annoying. If you like that kind of thing, Ducati’s DDA datalogging system is standard fitment. In terms of accessories on used bikes, the Streetfighter 848 is generally left pretty standard by owners. Aftermarket cans are common, but you don’t get the usual rearsets, replacement slave cylinders (it is a wet clutch on the 848, making the lever’s action lighter) or even master cylinder updates that the 1100 often has. A lot of owners fit a tail tidy, which does clean up the back end, but that’s about it.

The Streetfighter 848 is a really lovely naked bike that although looking a bit of a dog’s dinner is very good fun to ride thanks to its wonderfully balanced chassis. The issue in the used market is that even at the lower end of the price range, the Streetfighter is a lot of cash for a middleweight naked bike. If you can find one for under £5000 that is in good condition it would be worth buying but over £6000 for a bike that wasn’t very popular to start with just seems a touch salty.

Three things we love about the Streetfighter 848… 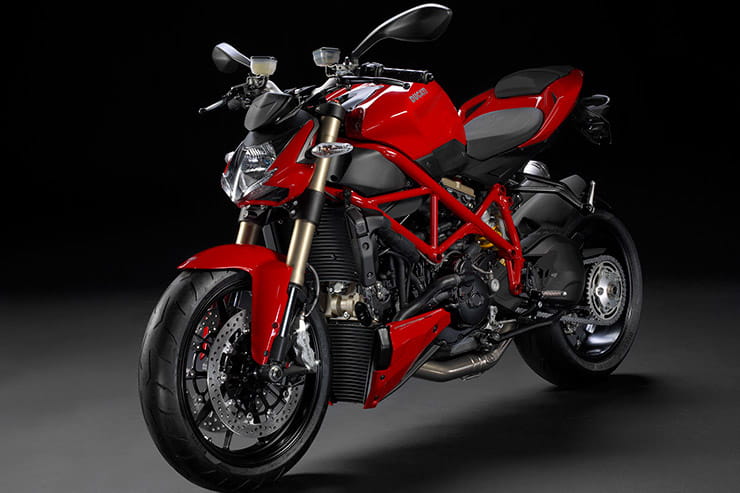