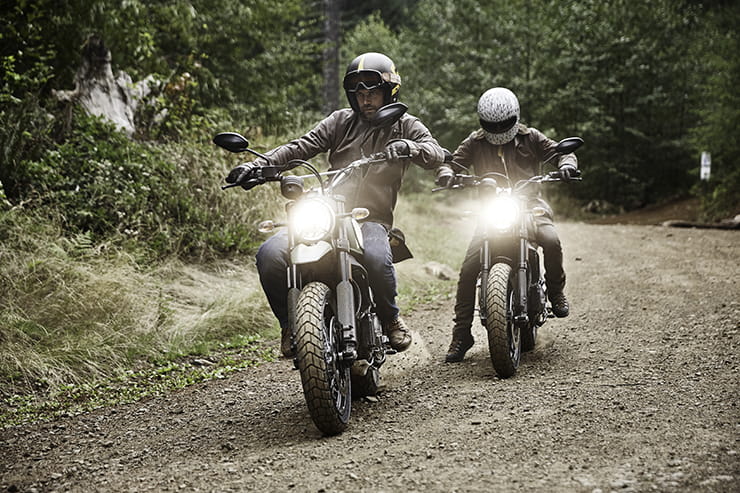 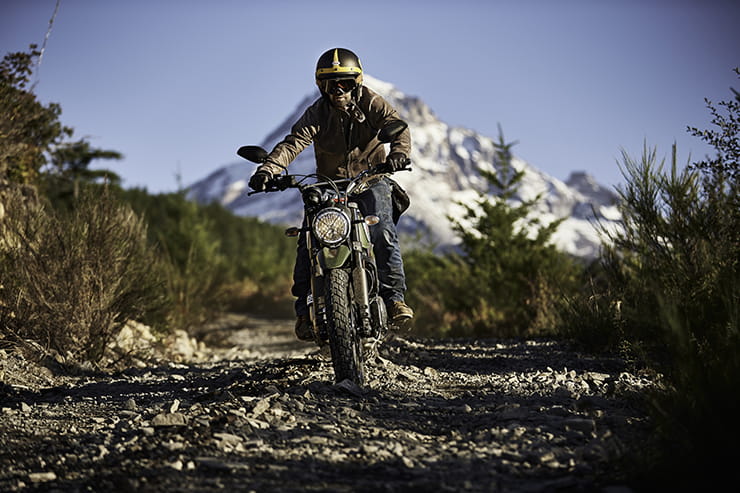 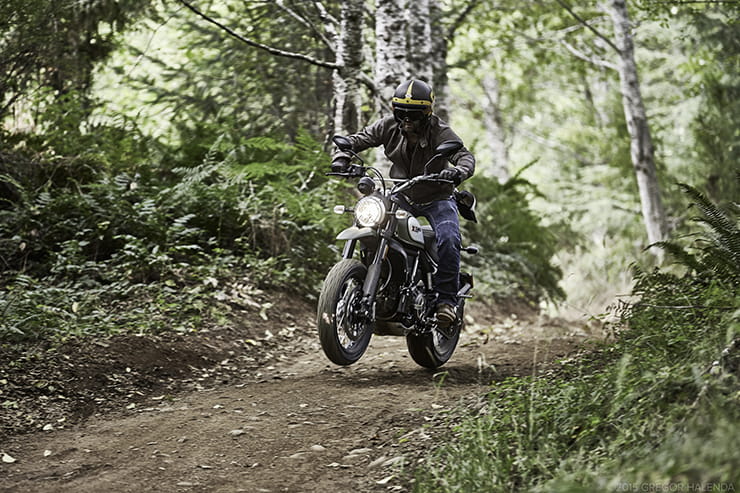 In 2015 Ducati introduced us to the cringingly-named ‘Land of Joy’ – which was marketing speak for a whole new range of retro models from the firm under the banner of Scrambler. In a flurry of beards, beard oil, skateboards, barbeques on the beach and general hipster cliché marketing stuff, four all-new models arrived – the Scrambler Icon, Classic, Urban Enduro and Full Throttle. Based on the same platform, the variations simply swapped a few of the base model Icon’s parts for uprated bits that gave the bike a slightly different look and attitude. Under the styling the Scrambler kept with Ducati tradition and that meant a trellis frame and air-cooled V-twin but upped the spec with modern parts such as inverted forks, ABS and a radial Brembo brake. An instant successes story for the firm, the Scrambler models were designed to appeal to younger riders (hence all the fashionable marketing) but in reality most were sold to older Ducati sportsbike owners who wanted something a bit more chilled-out than their race-rep as a second bike! Never mind, if you are after a funky retro that is pleasingly relaxed and cool-looking, the Scrambler is worth checking out. Just don’t feel the need to grow a beard and get a sleeve of tattoos alongside your purchase....

The Scrambler was always meant to be an entry-level Ducati model (much like the Monster it is based around) and a price tag of £6995 for the Icon was reasonable value in 2015. If you wanted the uprated Full Throttle, Urban Enduro or Classic you needed to fork out an extra £1000 for the privilege, which again wasn’t big money and they are quite different visually. Nowadays you can find an Icon for around £4500 in a private sale with dealers upping this to £5000-£5500. The Icon was by far the most popular bike and these are plentiful in the used market. If you want a variation you need to pay a premium with early Classic and Full Throttle bikes costing about £6300 and the Urban Enduro £6400 as it is a bit cooler. Price is also dependent on spec and a Termi pipe does add a few quid to all Scrambler models. If you want a brand new bike, ex-demos or pre-reg 2021 Icons go for in the region of £8000 while the RRP is £8500 for a new one. Aside from the updated ABS in 2019, very little has changed with the Scrambler aside from the style variations (Flat Tracker, Dark, Racer, etc the Desert Sled is a very different beast) so don’t be afraid of buying an older model if it is in good condition.

The 803cc desmo V-twin engine is pretty basic but that is all part of its charm and the fact it is a single overhead cam and two-valve design ensures its power and torque is all delivered low in the rev range. There is no need to rev the Scrambler, instead just keep it in its mid-range by short-shifting through the gearbox and enjoy the ride. In the 2019 update the Scrambler actually lost a bit of power (1bhp and 1lb.ft of torque...) but this is unnoticeable and was mainly down to how Ducati measured the bike’s performance than any actual ECU changes.

The air-cooled motor is the same as used in the 2014 Monster and in all honesty can trace its roots way further back in Ducati’s history than that so is a thoroughly tried and tested unit that is pleasingly reliable. Naturally there is the old ‘Ducati service history’ to insist on when buying a used bike but as long as this is adhered to all should be well. But it isn’t that cheap to run. Every 7500 miles the valve clearances need to be checked and every 15,000 miles the cam belts should be replaced, which is either a lot of money or not that worrying depending on the mileage you cover. The belts are actually time-sensitive and are replaced every 15,000 miles or five years, so always bear this in mind when buying a used bike. If you don’t cover great distances, an oil and filter annual service is only about £150 but the 7500 is closer to £300 and the 15,000 will go over £450 as the belts aren’t cheap. In 2019 Ducati swapped the clutch from a cable-operated unit to a hydraulic one to reduce the lever effort, which is a marginal improvement, but other than that the engine has remained untouched. When buying used a few owners grumble about gearboxes as the Scrambler does have a habit of jumping out of gear if not properly engaged, so check all is well on a test ride, and also be cautious about finish as the paint on the engine does come in for some criticism. A few bikes suffered side stand cut-out switch issues but these are rare however corrosion on fasteners is a common grumble, so check these areas and invest in some good quality anti-corrosion spray. There are no engine performance upgrades between Scrambler 800 versions, the alterations are purely styling-based. The Full Throttle comes with a cool road-legal twin-stacked Termi pipe, which can be bought (for a price...) as an aftermarket accessory and added to the other version. 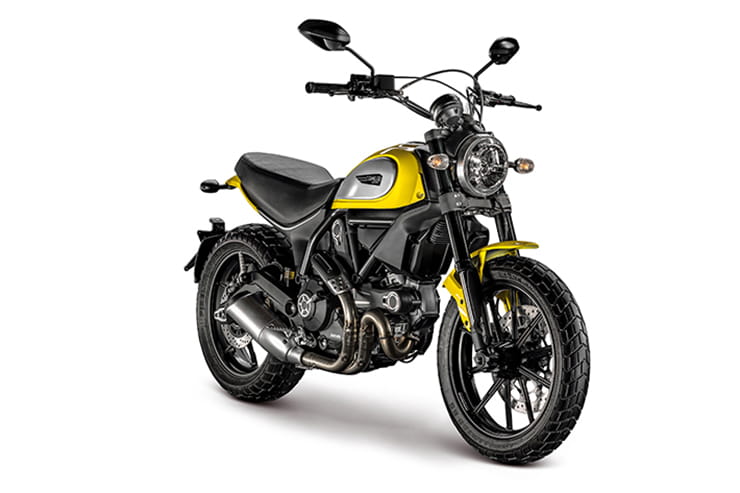 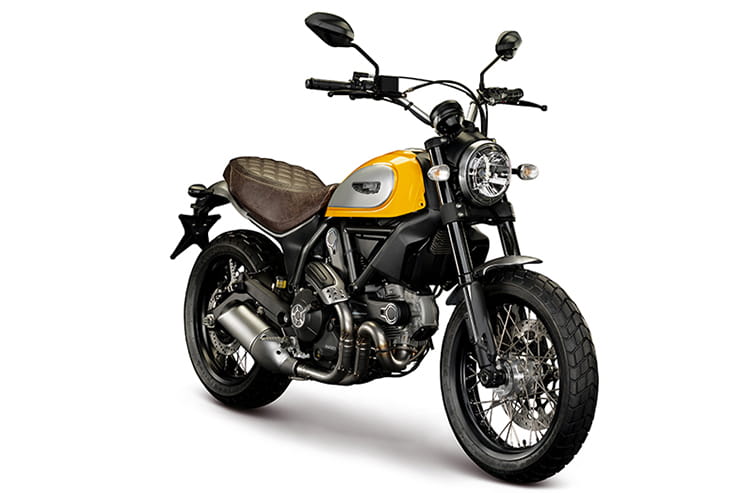 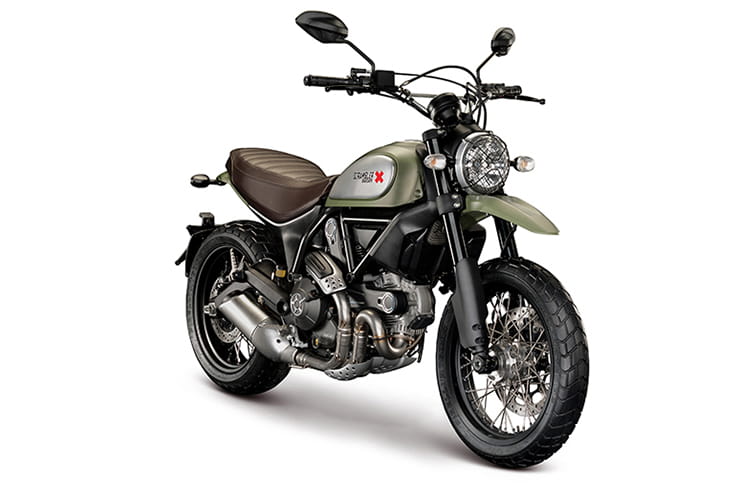 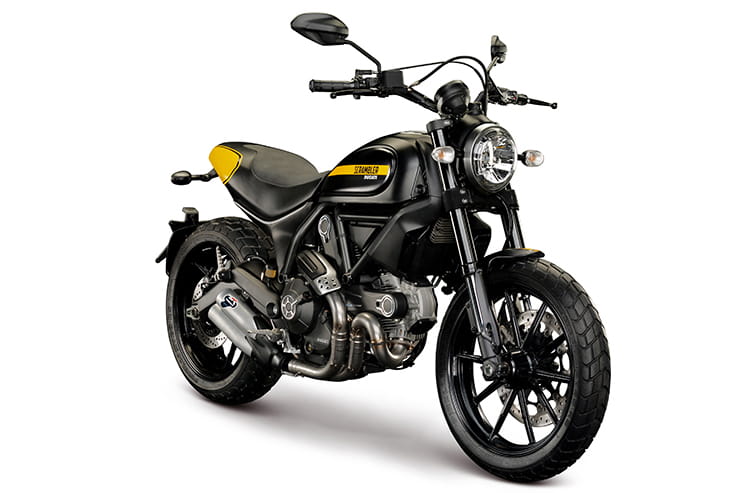 Ducati never claimed economy figures for the Scrambler but most owners seem to get close to 45mpg, which equates to about 130 miles from its 13.5-litre tank. This isn’t really a bike that is designed for long distances so that is pretty acceptable and with gentle urban use you can see over 50mpg fairly easily.

The Scrambler is designed as a lightweight city bike and tipping the scales at just 186kg and with a lovely low 790mm seat height (there is a 770mm option) makes it really easy-going in an urban environment. Out of a city the fairly basic suspension (the forks are non-adjustable, you only get preload on the shock) may appear a little disappointing but they are up to the job and you can certainly ride it at a spirited pace. Not full-on attack, but certainly spirited. Early bikes are a little more wayward than the updated 2019 machine, which features firmer suspension to improve the ride quality, but both are fairly softly-sprung. Does it matter? Not really, this is a bike to enjoy the road on, not try and go ballistic. Although the variations look more aggressive, they carry the same suspension and the same size wheels although the Classic and Urban Enduro swap the Icon’s cast wheels for spoked ones. When buying used always check the spokes for damage (it is highly unlikely the Urban Enduro will have been taken off road) as well as rust and ensure the fork and shock aren’t losing their damping or weeping oil.

ABS has always been standard on the Scrambler and the single Brembo radial caliper with braided line has more than enough performance. In 2019 Ducati introduced angle-sensitive ABS throughout the range, which is nice to have but not totally necessary. 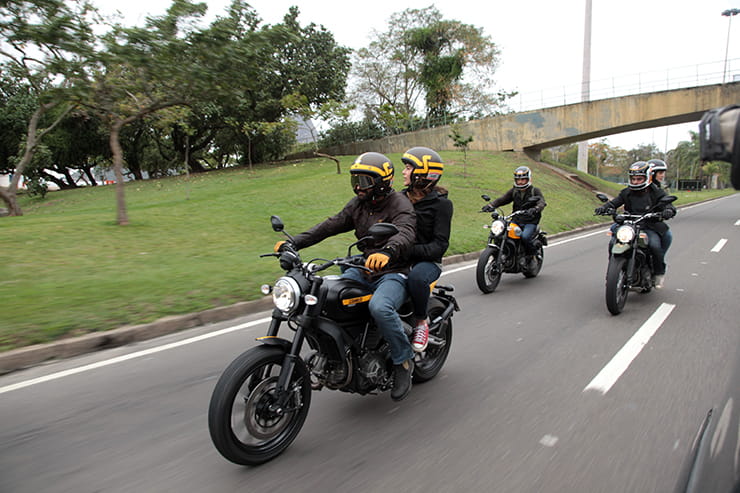 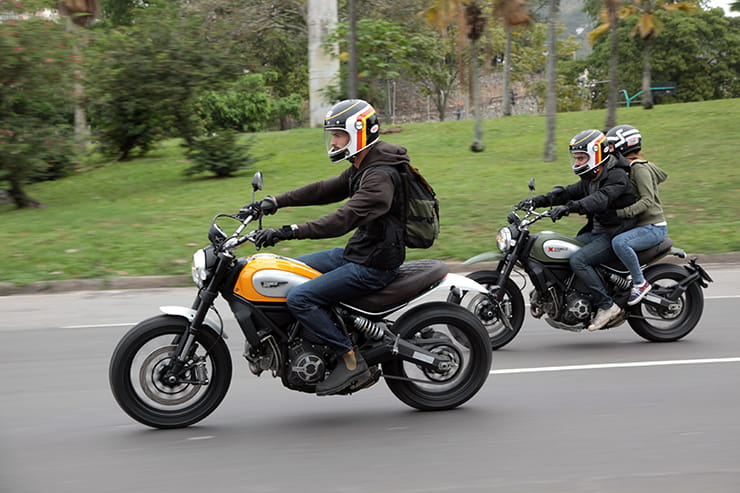 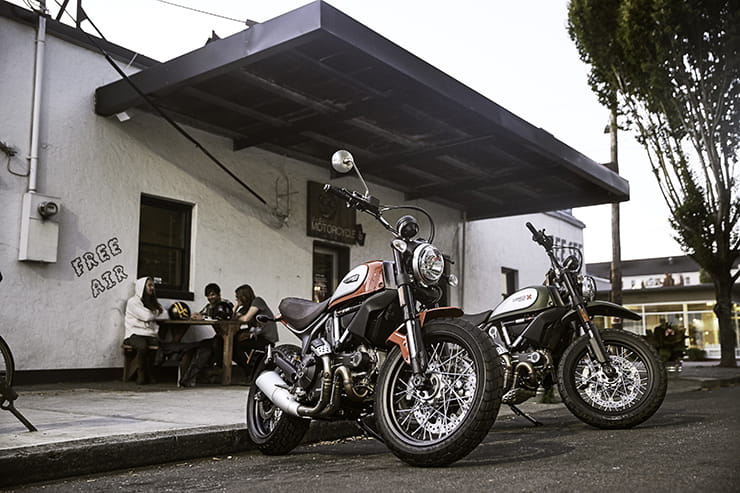 There has never been a ‘touring’ Scrambler model so while the bench seat is comfortable, the high bars and upright riding position isn’t ideally suited to distance work. More than happy to spend a sunny day cruising around, you wouldn’t really want to explore Europe on a Scrambler. It’s also not great two-up, mainly as a soft shock starts to suffer quite badly from the extra weight, leading to an uncomfortable ride as it runs out of travel.

In terms of standard equipment you get ABS (angle-sensitive on 2019-onwards models), a clock and a USB charging slot under the seat (fuel gauge and gear slection indicators were introduced on the 2019 model), which is pretty minimal but that’s the look Ducati have gone for. The 2019 bike allows you to add connectivity via Ducati multimedia unit but it is pretty basic. When it comes to extras, Ducati sell a fairly extensive range with luggage (both hard and soft), heated grips, various (very expensive!) exhaust options, comfort seats and the usual bolt-on billet bling. You can buy screens but they make the bike look awful and you are better off investing in crash protection instead. Generally, aside from a small smattering of bolt-ons, very few owners go mad with accessorising the Scrambler and if they want a funky look, most simply buy a pre-built version such as the Urban Enduro. Every now and then a ‘special’ pops up for sale, but these are really best avoided.

With the Scrambler Ducati succeeded in creating a fun, good-looking retro that appeal to all riders. Don’t expect it to be fast (or if you do buy the 1100 version) and instead keep it for the sheer enjoyment of riding. Yes, it ticks every cliché in the book but it is also a really fun bike to ride and not badly priced either.

Three things that we love about the Scrambler 803… 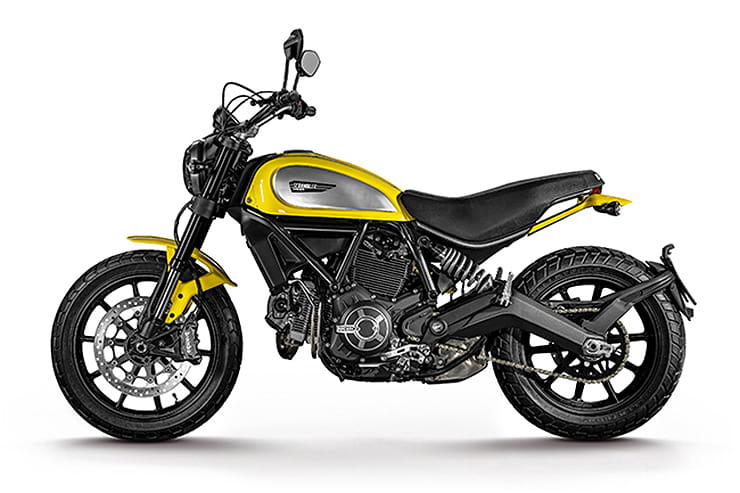 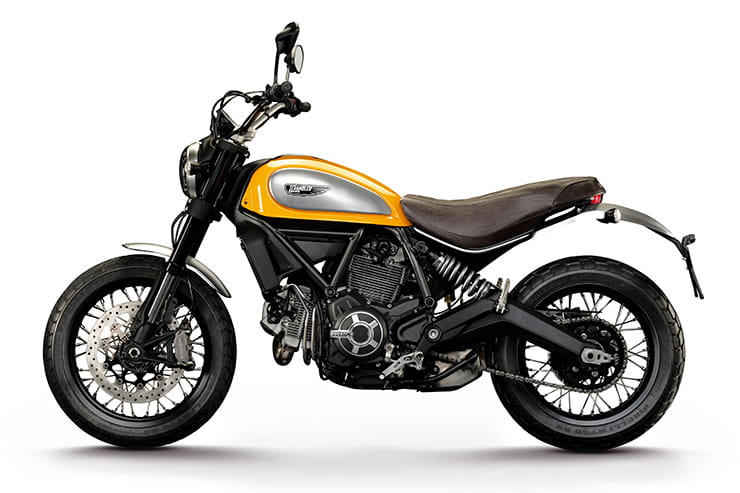 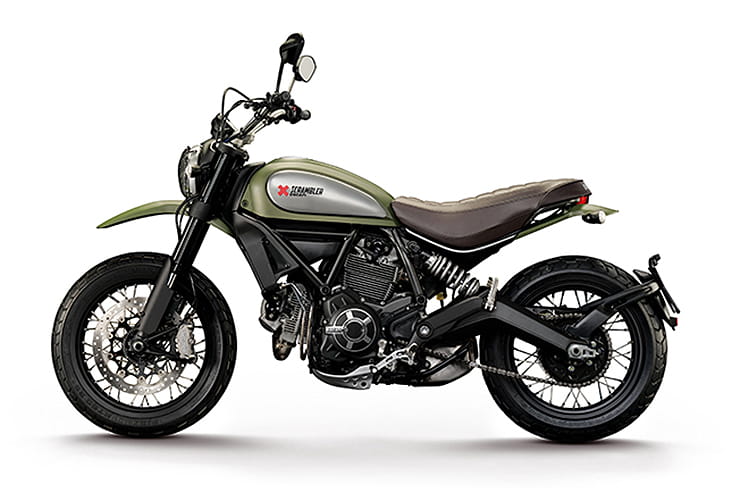 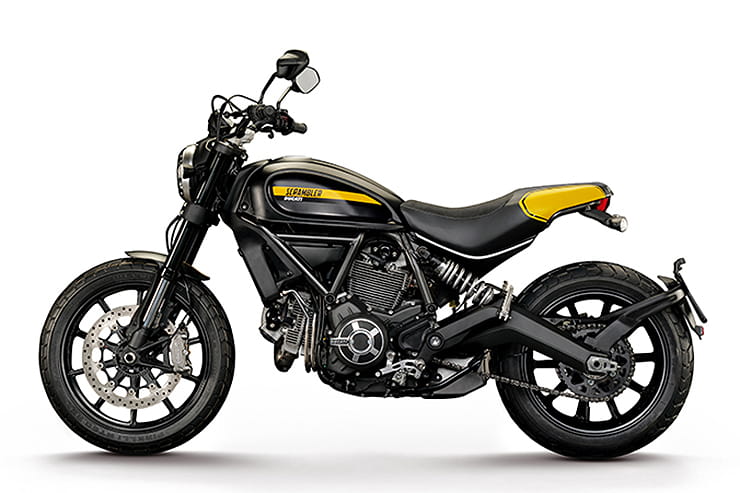 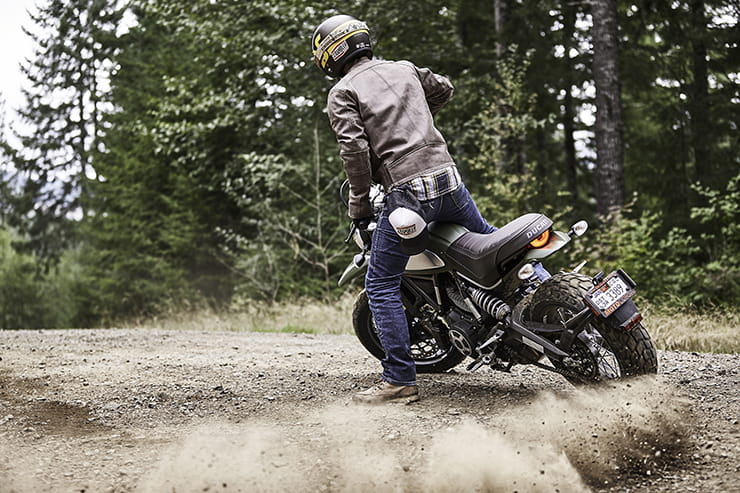