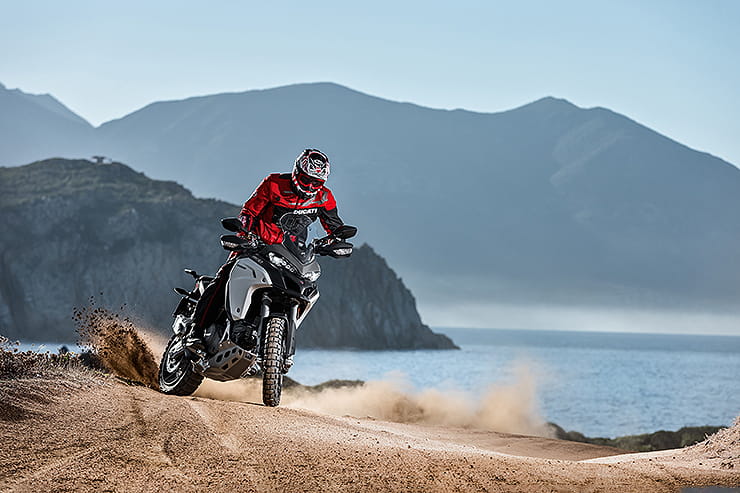 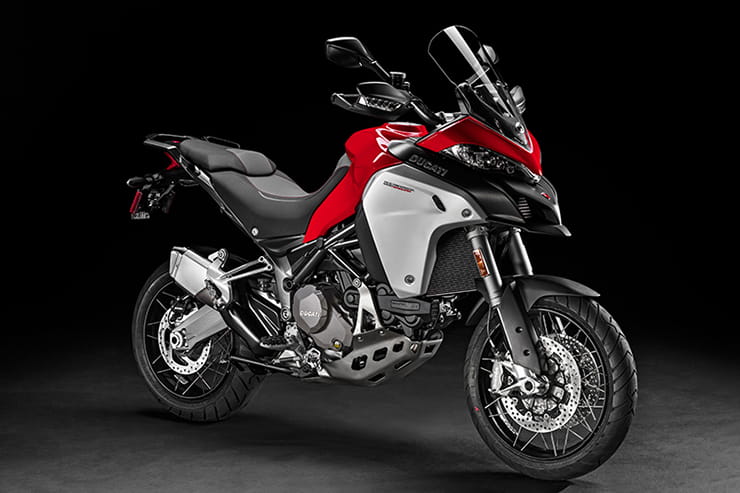 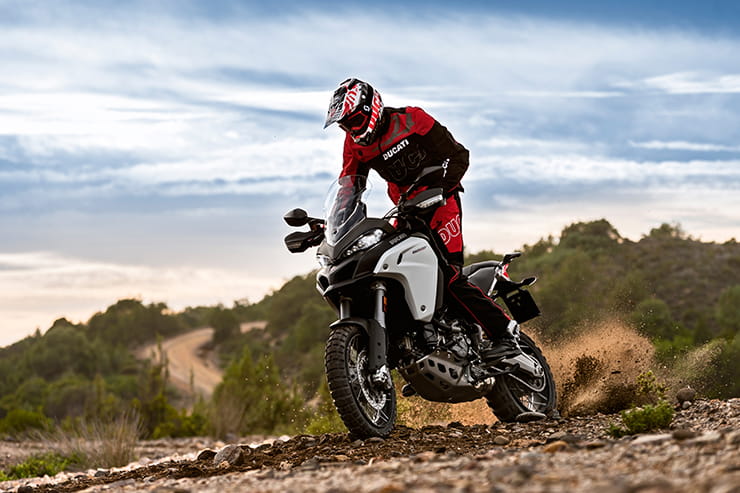 Despite Ducati calling their Multistrada an ‘all-roads bike,’ the fact of the matter is that with its 17-inch wheels, the Multi has a very definite road-focus where rival adventure bikes such as the BMW GS Adventure can legitimately take to the rough stuff. In 2016 Ducati decide to remedy this wrong and released a rugged version of their big capacity Multistrada – the 1200 Enduro. A full-on hardcore enduro bike, the 1200 Enduro blends the sophisticated road bike tech such as semi-active suspension and the DVT V-twin motor from the Multistrada 1200 with a more rugged chassis and 19-inch front wheel to allow it to take to the rough stuff. Not only that, but it also looks a damn sight more butch than the Multi!

Do you really need 160bhp in an off-road bike? If you think not you can always drop it into Enduro mode, which cuts the power to 100bhp, but in full power it is a real powerhouse of an engine. At 3000rpm the bike feels lively, it’s going strong at 5000rpm, and gets a full head of steam at 7000rpm all the way till the lights flash in the TFT full-colour dash around 10,000rpm. But you don’t have to rev it, the torque curve is flat and that means you can never be in the wrong gear, making it also super-relaxed to ride. The grunt is fiery and fun, and the noise it makes is most unexpected. It barks and growls under acceleration and on a set of second and third gear corners it pops ever so slightly on the overrun, just the way a thoroughbred should.

The DVT motor is a really solid unit and when buying used you only need to worry about service history, which on a bike that is still fairly new isn’t often a concern because nearly every single one will have a full history. Unlike older V-twins, the Enduro benefits from Ducati’s extended service intervals and that means a service every 9000 miles (or one year) and the expensive ‘desmo service’, which includes valve clearances and belts, is at 18,000 miles or five years. The desmo service is a fairly scary bill and you are unlikely to get much change from £800 so if the bike is near this mark, it is time to start haggling an appropriate discount. Interestingly the Enduro has a lower first gear than the road going Multi, giving it more instant punch, but that’s the only change and it is a solid unit. There is no official Ducati quickshifter for the Enduro, however several aftermarket firms make one if you really want to have it. The OE stainless steel exhaust is quite stylish on the Enduro (and also very loud!) and not too much of a lump however a lot of owners update it for a road legal Termi option, which looks the same but delivers a bit of a fruiter exhaust note in comparison. A few owners suffered electrical issues with the Enduro early on but these should have been sorted by now. 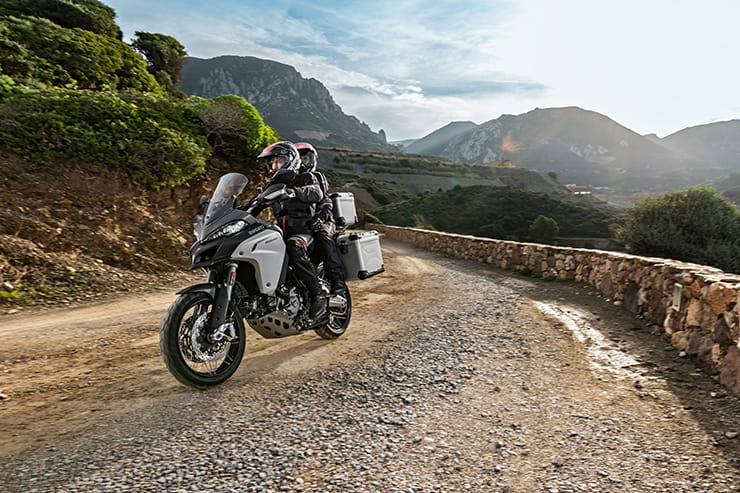 The Enduro comes with a whopping 30-litre fuel tank and with 40-50mpg fairly easy to achieve that equates to a tank range around the 250-mile mark, which is pretty good and unless you are a Dakar rider, it’s unlikely you will go this far off-road in one hit!

Although the Enduro uses the same trellis design of frame as the road going Multi, it has been beefed up and an extended double-sided swingarm fitted to make it a bit more rugged and its geometry relaxed. On the road it does feel noticeably less sporty than the Multi (its wheel sizes also alter its feel) but it is far from bad handling and you can still push on. The Sachs Skyhook suspension does a great job of taking that traditional dive out of the long travel off-road suspension under brakes and with a set of more road-targeted tyres (Ducati opted for Scorpion Trail II as OE fitment, which are moderately off-road targeted) the Enduro doesn’t disappoint. There is no reason the suspension should be showing any signs of wear by now but as it isn’t rebuildable always check the shock for leaks and the fork legs for damaged sliders due to stone chips. In the UK it is fairly unlikely an Enduro will have been off-road, but it is worth double checking the sump guard for dents and also the wheel rims as a few owners may be brave. With a fairly tall seat hight of 870mm (890mm and 850mm seat options are available) the Enduro can be a touch visually intimidating for those short in the leg but in reality it isn’t that bad due to the narrow nature of a V-twin motor.

With cornering ABS and Brembo monoblock calipers with a radial master cylinder, the Enduro has more than enough braking performance. The ABS system is excellent on the road and also very good off-road with the rear’s ABS able to be disengaged should you wish. The front and rear brakes are linked in Sport and Urban mode, helping keep the bike nice and level under braking. 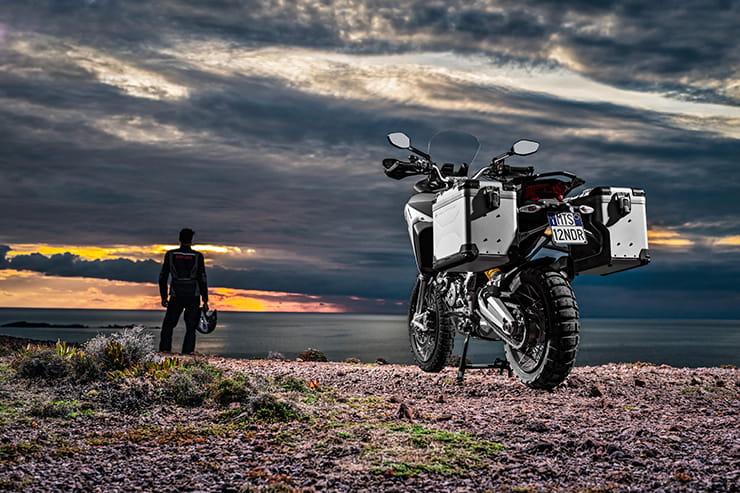 Some owners feel the Enduro is a touch lacking in weather protection, however this isn’t anything a taller screen won’t remedy and in general it is viewed as a good mile-muncher. As well as the Skyhook suspension helping to ease the ride, the Enduro’s bars can be altered in their position to improve rider comfort, which is a nice touch. Heated grip are an optional extra but cruise control and cornering lights come as standard.

Yep, lots of them! As standard you get cruise control, vehicle hold (hill hold), four power modes (Enduro, Sport, Touring, Urban), cornering traction control and ABS, wheelie control, semi-active Skyhook suspension, keyless ignition, cornering lights and a TFT dash with connectivity. All the assists are linked and so when you change the mode you also alter the responsiveness of things such as the TC, Skyhook and ABS. Ducati sold three ‘packs’ alongside the Enduro – Touring, Urban and Enduro. Touring adds heated grips, Touratech aluminium panniers and a handlebar bag. Sport adds a road-legal Termi exhaust end-can and a few billet trinkets while Urban brings a top box, USB hub and tank bag and Enduro extra LED lights and Touratech crash protection. It is worth selecting the bike based on the package you want as adding panniers afterwards can get costly. Also, if the previous owner has ticked the ‘Enduro Pack’ box you have to wonder why – has the bike been off-road? Very few used bikes have anything other than Ducati official accessories fitted.

There is a lot to like about the Multistrada Enduro and while it was updated to become the Enduro 1260 in 2019, there is nothing wrong with the 1200 for 99% of road riders. It’s not a cheap purchase but it is a fully loaded bike that looks rugged and comes with lots of great practical touches and a host of modern electronic systems. If you like the idea of a BMW R1250GS Adventure but are put off by the fact everyone has one, try the Multi Enduro out for size.

Three things we love about the 1200 Enduro… 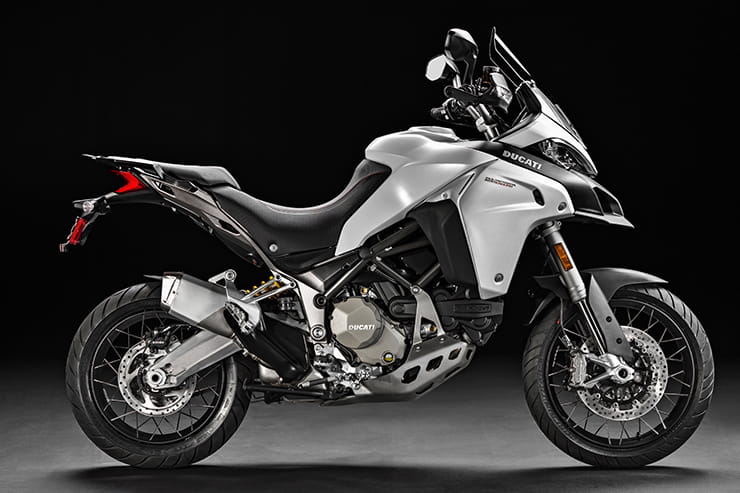