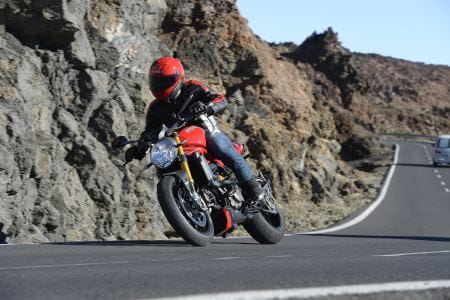 Ducati’s decision to give the Monster 1200 a liquid-cooled engine begins a new, more powerful era for Italy’s famous naked V-twin. And there’s much more to the 1200 and upmarket 1200S than just performance. Despite their unmistakable Monster family look they’re completely new machines that were developed with aims of rideability and refinement as much as power.

Riding the Monster 1200S around the spectacular Canary island of Tenerife on its launch confirmed that its 1198cc, dohc eight-valve desmo motor generates more speed and excitement than the previous, two-valve aircooled Monster 1100 EVO could have managed. But the Ducati was just as impressive for the extra practicality provided by both the engine and the new chassis.

This latest version of the Testastretta 11-degree V-twin plays its part in the Monster’s new-found refinement. It’s based on the Multistrada motor but revised with smaller throttle bodies for smoother low-rev performance, and produces a slightly lower maximum of 145bhp at 8750rpm (135bhp in the standard 1200). Even so, it grunts out far more torque than the aircooled lump throughout the range and revs 1500rpm higher.

It’s a superb engine, combining an impressively smooth and sweet feel at low revs with instant acceleration and a storming top-end charge — made all the more vivid by the wind hitting your chest as you grip the one-piece handlebar, which is 40mm higher and closer than on the old Monster. The Ducati might not quite match the latest batch of super-nakeds like BMW’s S1000R and KTM’s 1290 Super Duke R for sheer speed but it has more than enough acceleration to be heaps of fun. 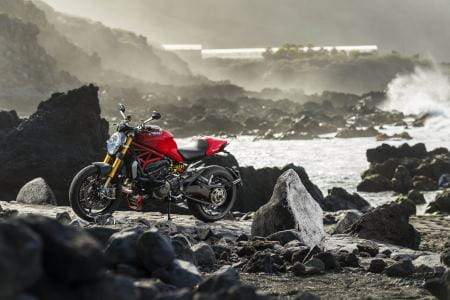 The new motor comes with electronic sophistication, too. There are three riding modes, easily changed using the indicator button: Sport and Touring give full power with varying throttle response; Urban is softer to a 100bhp max. Traction control and the standard ABS vary with mode. So does the instrument panel, which changes to show the most relevant info — so the speedo takes centre-stage in Urban, Touring brings up fuel range info, and the rev-counter is prominent in Sport. Genius, especially as it’s all programmable and remembers your settings.

There are more changes than are immediately obvious in the chassis, whose steel frame tubes look like a traditional Ducati trellis but are a Panigale style design with front section and rear subframe bolted to the load-bearing engine, and the single-sided swing-arm pivoting in the crankcases. The 1200S gets multi-adjustable Ohlins suspension front and rear, and a similarly top-notch brake set-up of 330mm front discs and Brembo M50 Monobloc calipers taken straight from the Panigale.

Ducati’s normal attention to weight-saving means the Monster is light at 182kg dry. It’s as effortlessly agile as those figures and the sporty steering geometry suggest, with a taut, sporty feel from the well-controlled Ohlins units. There’s heaps of ground clearance, good grip from Pirelli’s Diablo Rosso II radials, and eyeball-loosening stopping power from those Monobloc calipers and excellent standard ABS system.

Comfort was pretty good, too; a notable improvement on the more aggressive Monster 1100 EVO. The firm suspension felt harsh on one horribly bumpy road through the Tenerife lava fields but on normal surfaces the Ducati’s ride quality was fine, and its wide seat (which is low and can quickly be adjusted for height) was comfortable.

The mirrors blurred at some speeds, and the high footrests meant that my right boot sometimes touched the cover of the exhaust collector. But ergonomics were otherwise sound, and a pillion gets a better deal with a more generous seat and built-in grab-handles. The larger, 17.5-litre tank would give a genuine 150-mile range at my 45mpg launch average. As usual with a Ducati, accessories range from carbon and billet bits to luggage and exhausts.

It adds up to a rapid, respectably refined and versatile bike that still has plenty of traditional Monster charm, and which justifies Ducati’s decision to return to the liquid-cooled format of old models such as the Monster S4R and S4Rs. At £12,995 the 1200S is far from cheap (the standard 1200 costs £10,695) but this is the best, most versatile Monster yet, as well as the most exciting one.