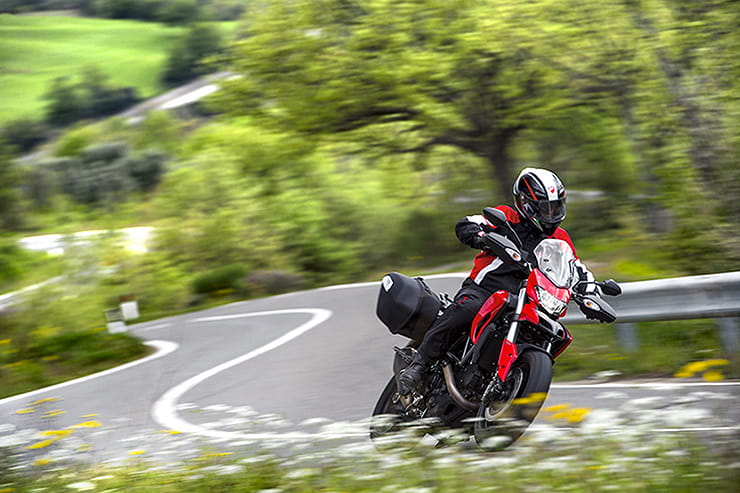 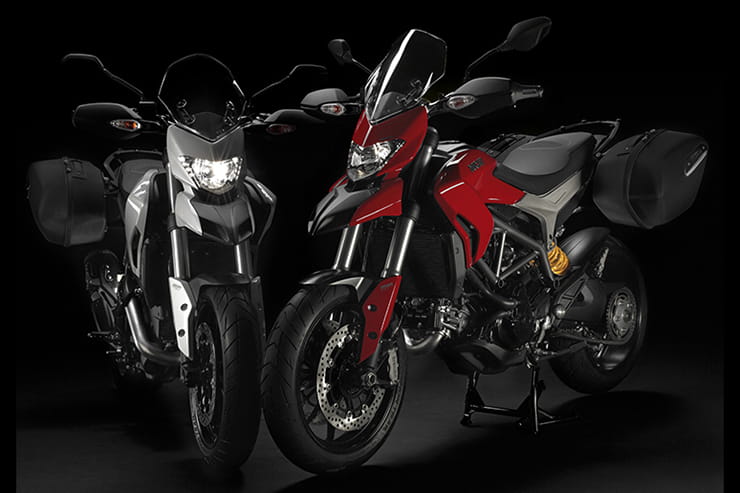 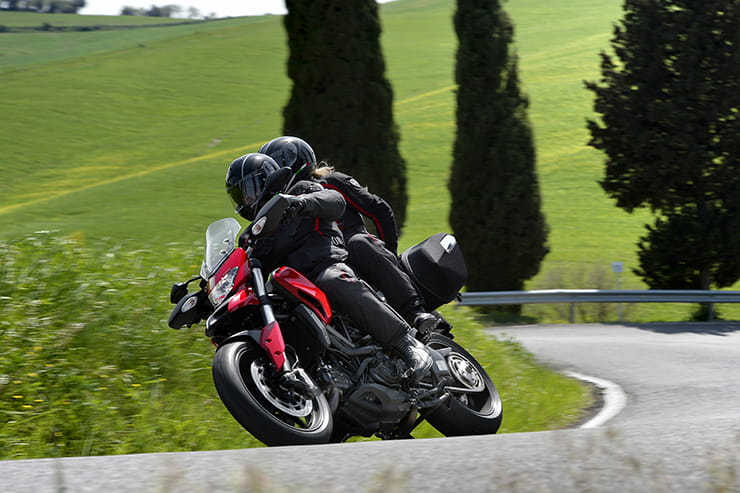 Aiming to add a new dimension to Ducati’s fairly unpractical Hypermotard range, the Hyperstrada was launched alongside the Hypermotard 821 and Hypermotard 821 SP as the practical alternative. Well, relatively speaking of course... Claimed to offer a ‘crossover between the worlds of touring and motard’ the Hyperstrada was basically the standard Hypermotard with a few touring-targeted options bolted on that included soft panniers, a centre stand and a taller screen. Never the most popular of models as the market it was aiming for didn’t really exist and it was very expensive, the Strada makes for a fairly fun middleweight that is a good short-hop companion and agile in the bends when you reach your destination. Now that its used price is roughly half the asking price when new in 2013 it also now almost makes financial sense - almost...

When the Strada was launched in 2013 it cost a fairly high £10,650, which although less than the horribly expensive SP version at £11,995 was more than the standard Hypermotard’s £9696 asking price. However this wasn’t its biggest problem, the main issue was that as Ducati were billing it as a sporty tourer it went up against the likes of the Kawasaki Z1000SX and Yamaha Tracer 900, both of which were cheaper and better tourers. Nowadays the prices for a Hyperstrada start at £5000 for a well-used version or £6500 for a low-mileage example in a dealership. There are a few bikes that are approaching 20,000 miles for sale but the vast majority are well under the 10,000 mile mark.

The 821 engine (which was first used on the Hypermotard 821 models) was designed as a punchy middleweight motor and it certainly delivers on this billing. Thanks to its V-twin format it has a really good spread of torque and although 110bhp doesn’t sound that much, it is backed up by 66ft.lb of grunt that feels pleasingly pokey thanks to the Strada’s light overall weight. As with any V-twin, it can get a bit grumbly low down in the rev range but overall, it fits the billing for a middleweight sporty tourer.

The 821 engine is known as the Testastretta 11-degree motor and building on the 2013 Multistrada 796 model’s base it improves in a number of key areas. As well as a slip and assist clutch making the lever’s action lighter, the 821 engine has better fuel injection, internal updates and lengthened service intervals, which are now 9000-miles between services with the desmo service (the biggy with valve clearances and belts) every 18,000 miles. A solid motor, if well looked after faults are few and far between in terms of the actual engine however its ancillary parts can be a bit problematic. The Hyper has received a few safety updates, so ensure they have been completed by running the frame number through a Ducati dealer, and a fair few owners report various sensor failures, which are annoying and potentially expensive. Look for warning codes on the dash (you can download a manual from Ducati’s website to see what the codes mean) and always give the bike a reasonable test ride to see if any are thrown up when it gets warm. The gearbox is solid and so is the exhaust system, however a lot of owners replace the OE can for a better looking aftermarket unit. There are two reasons for this, the first being it looks and sounds better, the second being the fact the black paint is prone to flaking off the silencer! 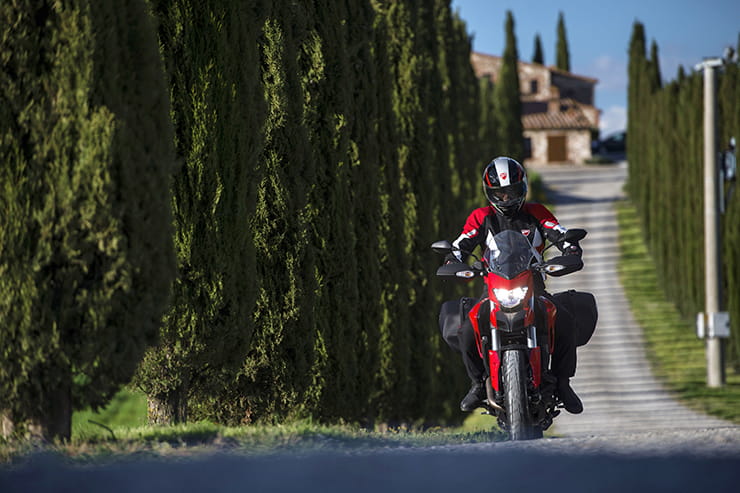 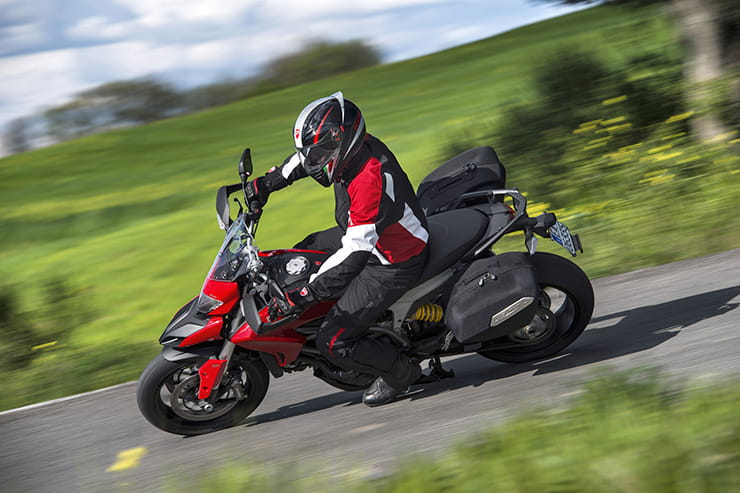 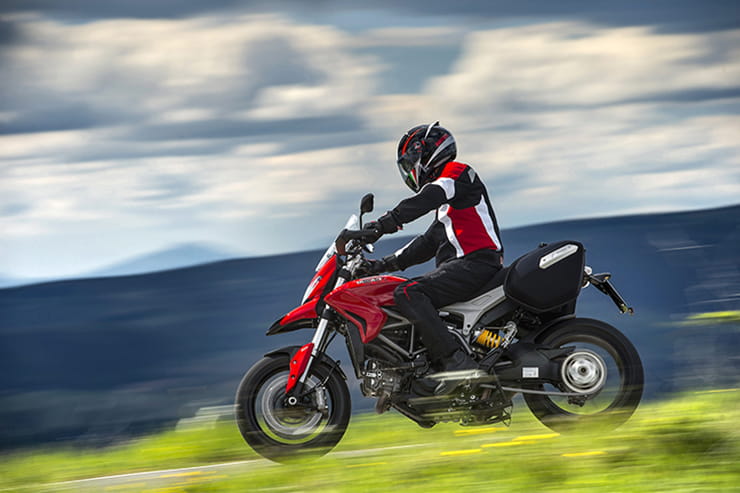 Ducati never claimed economy figures for the Hyperstrada, however you can reasonably expect to see 50mpg, which equates to roughly 150 miles from the 16 litre tank. That’s not bad and is about as far as you will want to go before stretching your legs.

Tipping the scales at just 204kg wet, the Hyperstrada is a surprisingly agile bike whose supermoto riding position and wide bars allow you to muscle it into bends. Although the SP model with its uprated suspension is the full-on sporty version, the more chilled-out Strada isn’t bad at all and while the Kayaba forks lack any adjustment and the shock only gets preload and rebound, they are well set for relaxed road riding. Even spirited road riding once you add a bit more preload to the rear to stiffen up its slightly soft feel. It is highly unlikely the shock or forks will need replacing or servicing by now, however a quick check for any leaks is advised, so instead concentrate on the single sided swingarm, which can be a real issue. As with any single sided unit, over tightening the pinch bolts can distort the hub while road grime once in can cause it to seize up. Ask the owner to demonstrate adjusting the chain (helpfully the Strada has a centre stand as standard) and see if they know the correct torque to tighten it up (31Nm) and also ensure that the hub moves freely. Overall, in terms of its chassis, the Strada is quite solidly built.

With ABS as standard and Brembo monobloc M4-32 calipers, the Hyperstrada is certainly not lacking in the braking department. The ABS has three levels of sensitivity with the rear able to be deactivated for track use. As braided lines are standard fitment, if you want a bit more bite, simply swap the pads for a more aggressive compound. 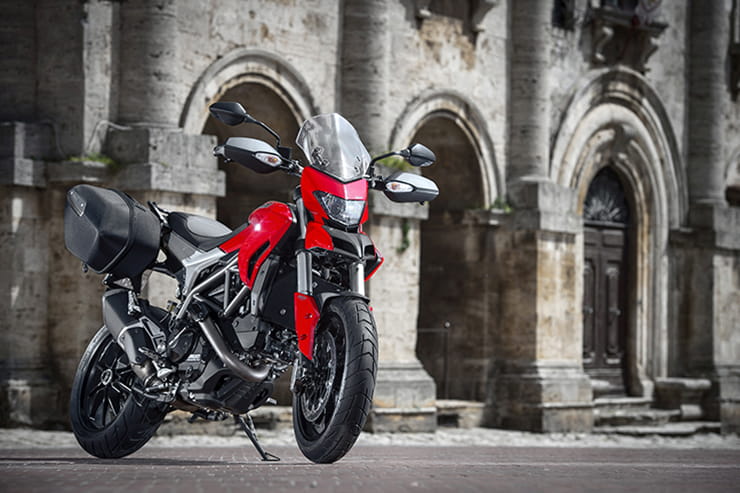 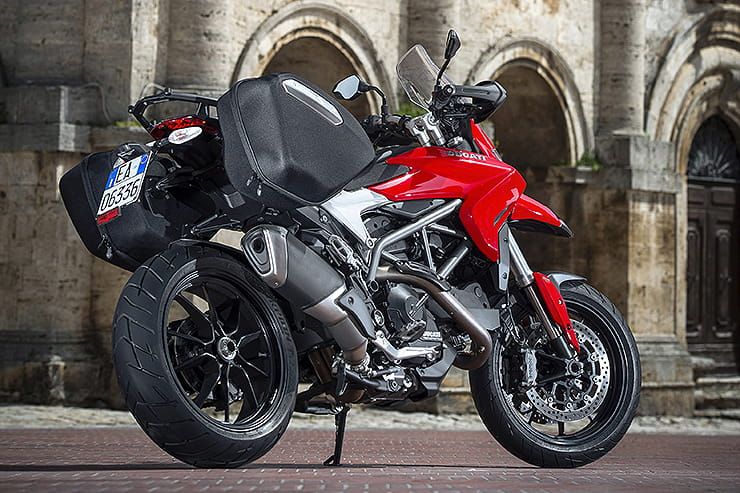 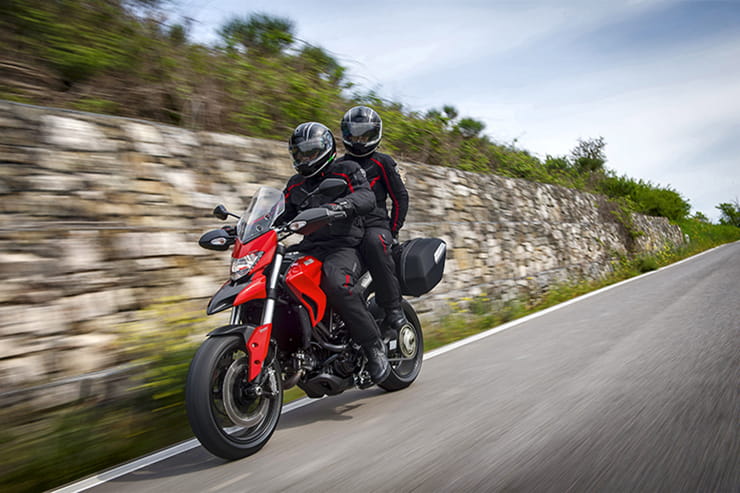 The Hyperstrada was designed as the ‘touring’ model in the range and while it is true the riding position with its low pegs and tall bars (up 20mm on the Hyper models) is quite comfortable, the ‘touring’ seat isn’t that sumptuously padded and the screen not enormously effective. On the plus side, you do get two 12v outlets to power heated kit! It is a bike that is best thought of as a sports tourer and you can cover reasonable distance on it but don’t expect to clear off one tank of fuel directly after another as you will be wanting a good stretch after 150 miles in the saddle. And it’s not great for a pillion either as the seat isn’t very generous in its size and the 25-litre panniers (which also aren’t very secure as they are nylon and lack a lock) can get in the way a bit.

Considering its price tag, it should come as no surprise that the Hyperstrada has a decent list of rider assists. You get three riding modes – Sport, Touring and Urban – which alter the power. Sport gives you the full 110bhp, Touring 110bhp with a more gentle throttle action and Urban 75bhp with a very gentle action. The ABS has three levels of intervention and can be disengaged at the rear (or completely) while the traction control (DTC) has eight levels. Watch out for the dash when buying used, a lot of owners report they can fail. When it comes to accessories, most Stradas come with a solid top box as it is a bit more secure than the soft panniers and also narrower for filtering, heated grips are common, as are aftermarket cans, and a few owners also fit taller screens. Very few Strada owners push the boat out much further than this, it’s just not that kind of bike, if you want a full-on model buy the SP instead.

The Hyperstrada is a weird machine that is an acquired taste and certainly lacks mass-market appeal. At £5000 in the used market it makes far more sense that at £10,000 brand new and if you want an interesting bike that is great on the back roads and reasonable for short tours, it is a good option that despite the name on its tank isn’t that expensive to run. Just don’t buy one expecting to load it up with tons of luggage and a pillion and then set off around Europe, it’s a short-hop machine, not a mile-muncher.

Three things we love about the Hyperstrada… 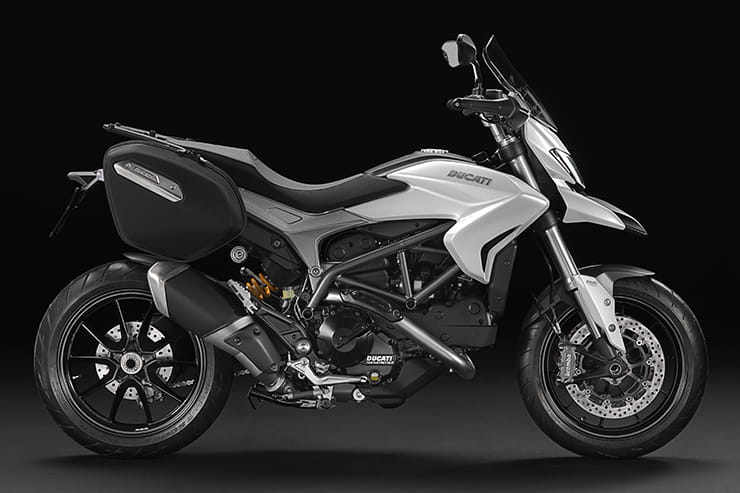 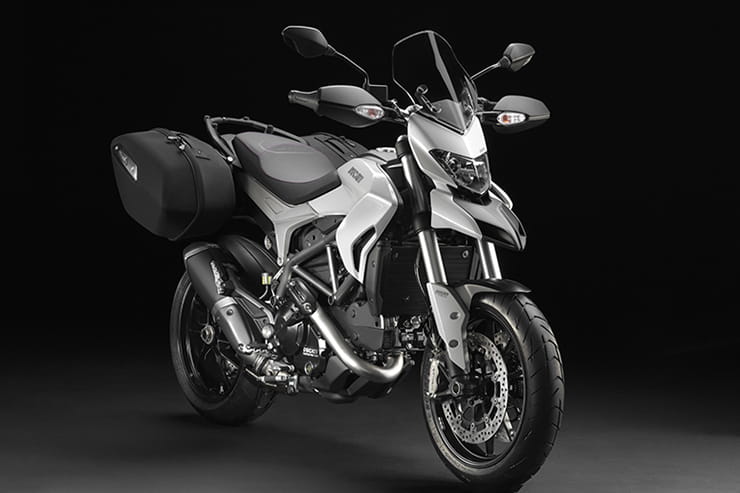 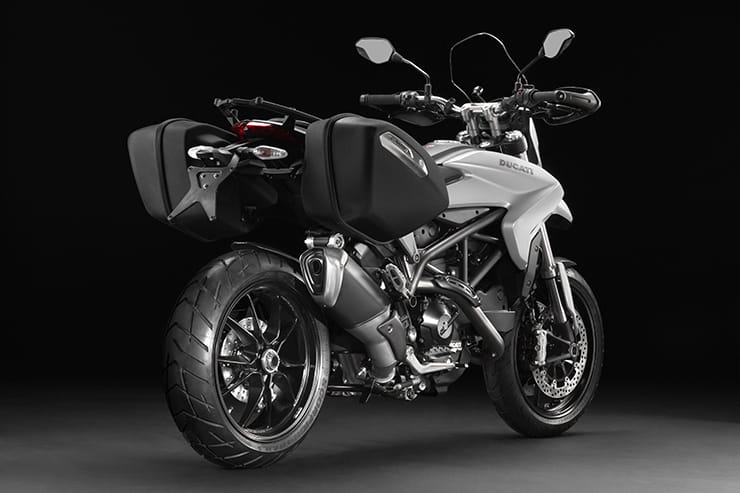 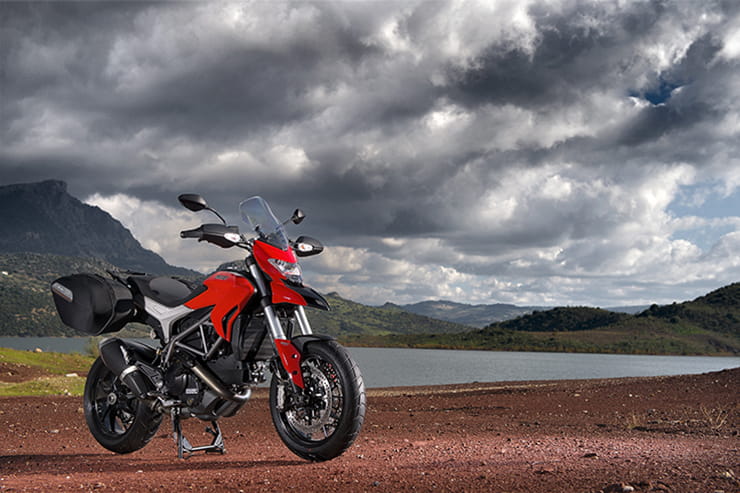