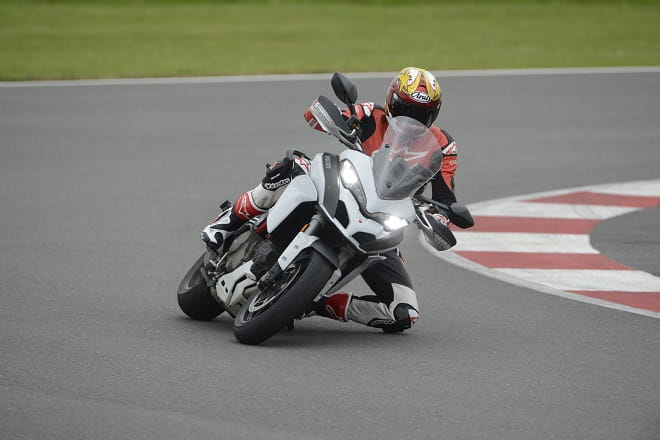 Ducati’s new 2015 Multistrada 1200S is a welcome addition to the Bike Social fleet this year, and has already clocked 1620 miles in its first month on the team. Okay, so it arrived with 620 miles on the clock, but it's still impressive in one month and shows just how versatile the Multistrada is. From mobile office to high-speed tourer, the Multistrada is a brilliant motorcycle.

The 2015 Ducati Multistrada 1200S turns the ordinary into the sublime. Transforms the commute into a lap of Cadwell Park. It creates memories from the mundane, and does touring in six-star luxury, even two-up. Every ride leaves you wondering just how much more amazing can road bikes get?

When Ducati unveiled the new Ducati variable valve timing engine (DVT) for the new Ducati Multistrada 1200S in Lanzarote earlier this year I was lucky enough to be at the launch.

With that new variable valve-timing engine putting out a claimed 165bhp, a whole new chassis with new integrated bodywork, updated semi-active Sachs 'Skyhook' suspension, and new styling, we were mesmerised by just how perfect road bikes are becoming. And on UK roads where we’ve had more chance to ride the bike harder, it’s just as good, or even better than it was at the bike’s launch.

In its first month on the Bike Social crew the bike has ridden to the seaside in 100bhp mode with some mates on classic bikes, been on track days, used as an executive express train to get around the country on jobs for Bike Social, ridden two-up, used in the wet and dry, and as a tourer. It’s been quite a start.

Here are just some of the reasons why we love the new 2015 Ducati Multistrada 1200S Touring: 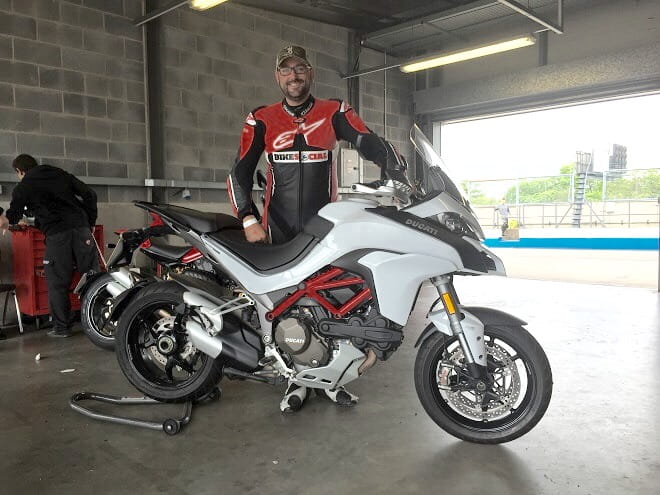 IT DOES TRACK DAYS:

Ducati’s track day at Donington Park gave use the first taste of what the Multistrada 1200S could do on track. Okay, so it wasn’t our bike, but it was the same spec as  the one we're now running.

Then it was a simple case of cranking the electronically adjustable suspension up to the setting for two people with luggage so it was basically as hard as it can get. Then dial-in sport mode for full power on the most aggressive fuel map. With the ABS turned to minimum and traction control allowing a small amount of slide, and a bit of wheelie control dialled in we were ready to hit Craner Curves. Not literally, you understand.

Look, we’re not saying it’s a track bike. It’s not. But around Donington’s full circuit it surprised a few people, and surprised me riding it, too.

The ground clearance is the limiting factor with the pegs scraping even on the multi-purpose Pirelli Skorpion Sport Trail II tyres.

But in all honesty, a better tyre isn’t needed because they’re soft, heat-up fast, and grip till it grounds-out. Maybe a better tyre might give you more on-the-edge front grip feel, but it’s marginal. 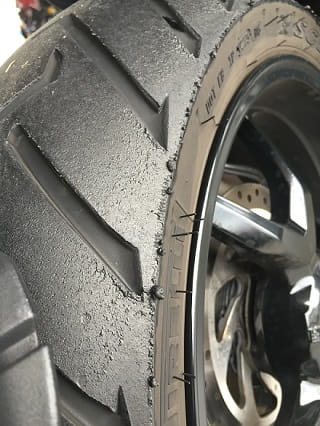 Ride the Multi fast into a corner and you have to get it stopped, lean it in, be patient and then use the traction control to give stupidly rapid corner exits.

Hit full power on the way out of corners, lean on the electronic wheelie control and traction control and the new Multistrada flies.

It’s not one for massive corner speed, but then you need to keep reminding yourself that it is an adventure bike! And it can still get to some decent lean angles.

We got our second opportunity to ride the Multistrada on track at the Silverstone Stowe Circuit during a day where we launched the new Bennetts-backed RD250LC Pro-Am race, and snuck a few laps in at the end of the day on the small circuit.

With the suspension cranked to maximum using the electronic dash, the Multistrada was a missile around Stowe. You can get it to peg-down lean angles just holding it off decking everything out, and use the cornering ABS on the way into corners in a similar way to how it worked at Donington Park.

Again. It’s no track bike, but the Multistrada is fast and respectable on track.

THE ELECTRONICS ARE AMAZING:

On the way in to turns, the Brembo brakes mean it stops hard. They are incredibly powerful and the cornering ABS allows you to brake fully hard to the apex of a corner. You can fool the electronics and get the back wheel hopping in the air on the way into turns, but the system – powered by the ultra-clever Bosch Inertia Measurement Unit – allows you to get away with hard braking at lean angles that you can’t believe possible without crashing.

The traction control and wheelie control are just as impressive too. On-the-road you can nail the throttle fully hard open and it accelerates without any wheelies with the DWS system turned up.

The traction control system rarely comes in on the road, but on the track it is constantly helping you find more drive, and making you ride safer, and faster. 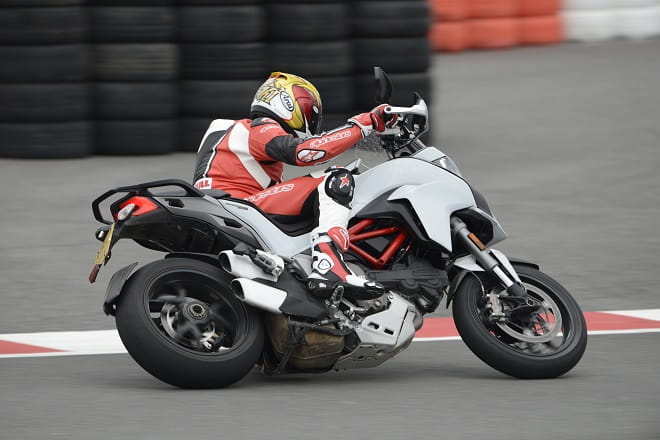 THE MOTOR IS MIND-BLOWINGLY FAST:

No adventure bike before it accelerated like the original Multistrada, and you’d be hard-pushed to beat the Ducati now. With 160bhp and variable valve timing essentially giving the bike two engines in one, it feels smooth and quiet at low revs and is ultra-manageable at low-speeds, yet blurs the horizon with a booming Ducati feel when you pin it.

It’s so smooth too that sometimes I wonder where the extra cylinder has been hidden, and on occasion it has seen more than 50 miles per gallon! 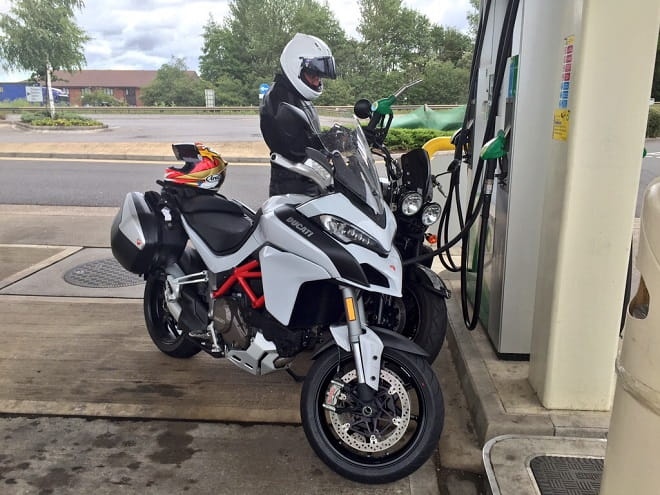 IT CAN DO PILLION WITH TWO BIG BLOKES:

When a run to Triumph Motorcycles to drop a Rocket III back to Triumph came along, the Multi stepped in as a two-up taxi for myself and Bike Social's Michael Mann.

I pulled rank on who was riding, set the engine to its touring setting, which allows full 165bhp power but delivers it in a slightly calmer fashion.

With two big blokes on-board I also cranked the suspension up to the rider and passenger setting. It’s all done at the touch-of-a-button, and you can feel it lifting the rear shock up as it dials in the setting.

The Multistrada coped incredibly well with a combined 30-stone on-board.

Passenger Mann said: “The seat is nice and wide and deep, with plenty of room. It was a pain to get on and off with the panniers on though. The grab handle gave plenty of options for holding on under acceleration or braking, and even when the rain came the wind protection was fantastic.”

From a rider’s point of view the Multi was rock solid and could be hustled along two-up, yet we were far enough apart on the bike to save embarrassment. It passed the pillion test with flying colours, even with two big blokes on board. 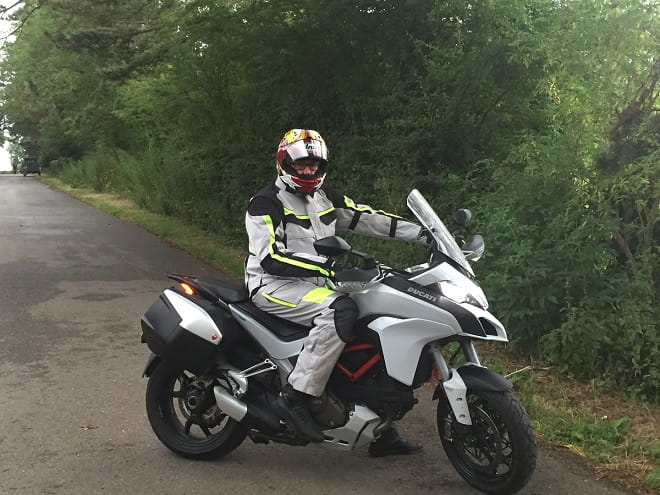 Original Multistrada 1200 Touring panniers were useless. They leaked, the hinges bent when you put things in them and were so thin that anything inside fried from the heat of the exhaust. They were recalled to fit a better clamp, but they still weren’t great. Second generation Multistrada panniers upped their game, but these are leagues ahead.

They’re finished with a brushed aluminium finish and they clamp shut, are lockable, and so far have been waterproof too. I can fit a full-size helmet in the left pannier too, and more than enough stuff for a weekend away. The optional top-box would turn the Multistrada into a very competent touring bike. 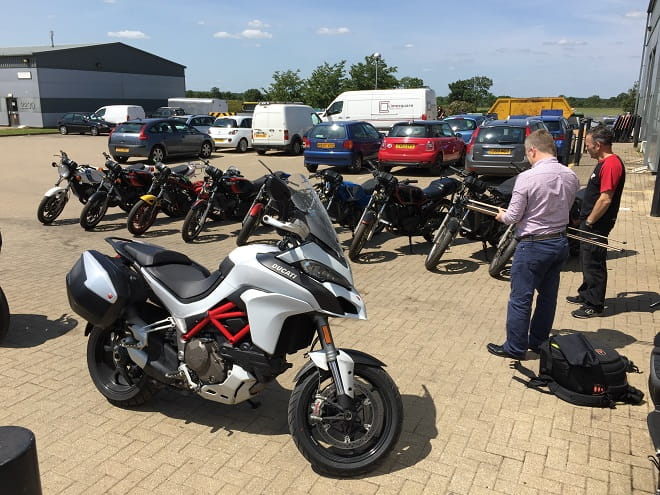 IT CAN CHARGE YOUR PHONE AND LINK WITH BLUETOOTH:

Lift the pillion seat and underneath is a socket for running your sat-nav off, plus a USB port for charging your phone or other electrical device from. It’s the same system as on the Ducati Scrambler. As I spend a lot of my time working for Bike Social on-the-road, it’s a great way to make sure that even when you’re out on your bike you never run out of charge.

The Multistrada also pairs up to your mobile and displays calls coming in, and texts through the dashboard. Ducati tell me an app will be available shortly to make all this smoother.
I just need to get myself a Bluetooth headset now and the Multistrada really can be my mobile office!

THE SWITCHGEAR LIGHTS UP AT NIGHT:

We’re used to it in cars, but it’s a rarity on bikes to have the switchgear back-lit so you can see what you’re doing at night. It’s an influence from the men at Audi. They own Ducati.  It also makes you wonder how we’ve got away with fumbling in the dark for so long.

The TFT screen, which uses the same technology as mobile phones, also changes colour at night making it easier to read and giving less glare to the rider than the white screen traditionally would.

The headlight uses motors to keep the beam where the bike is leaning, or pointing, but we haven't had eniugh chance to test it properly yet so will report on that in aniother 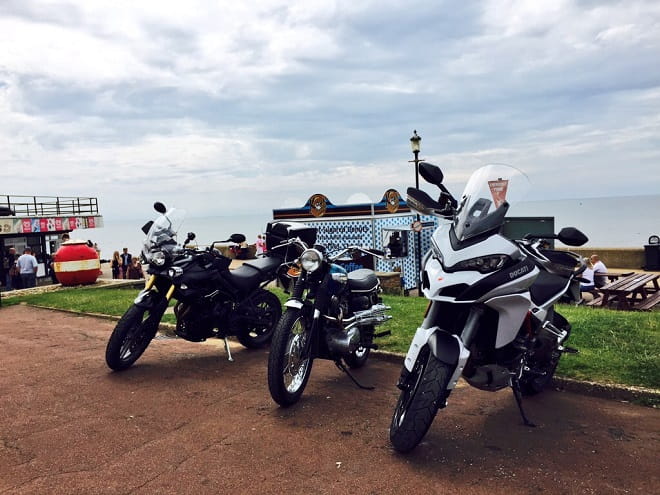 IT’S A BIKE FOR ALL REASONS:

From 150 mile days in the seat, to a track day, two-up riding. Late-night runs fully-laden with the panniers full and solo runs on a Sunday when the roads are clear, the Mulistrada really does do it all. The only thing we haven’t tested yet properly is its off-road ability but we have some plans for that coming up. 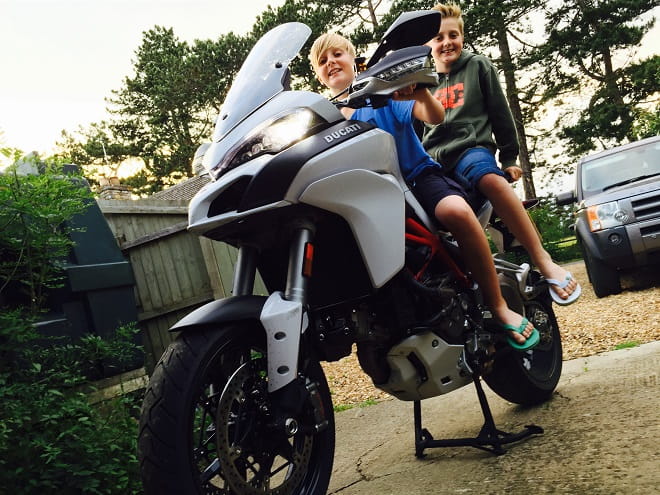 With that engine accelerating so fast and so quickly through the gears, a quickshifter would really suit the Multistrada and enable you to make the most of that glorious motor.

We’d also like a higher-screen. They are of course available from Ducati. But there's not a lot else wrong with it.

Our long-term test bike is the Ducati Multistrada 1200S with an optional £950 Touring pack giving the bike panniers, heated grips and a centrestand. It costs £15,995 plus the £950 pack. Other packs from Urban to Adventure are available. For more information go to Ducati.