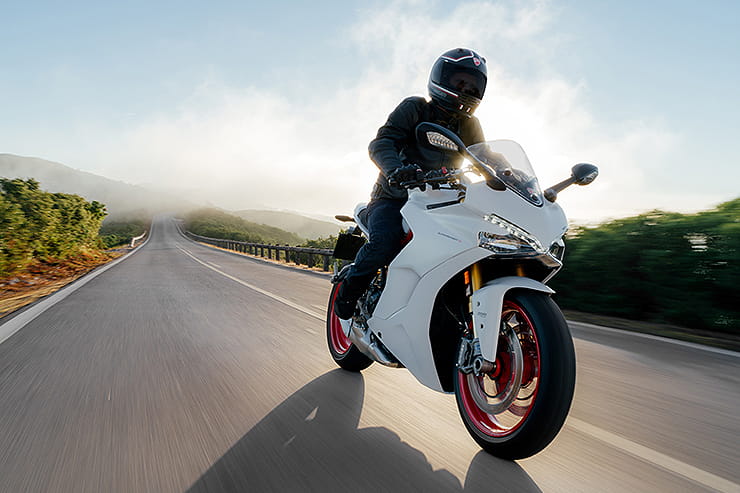 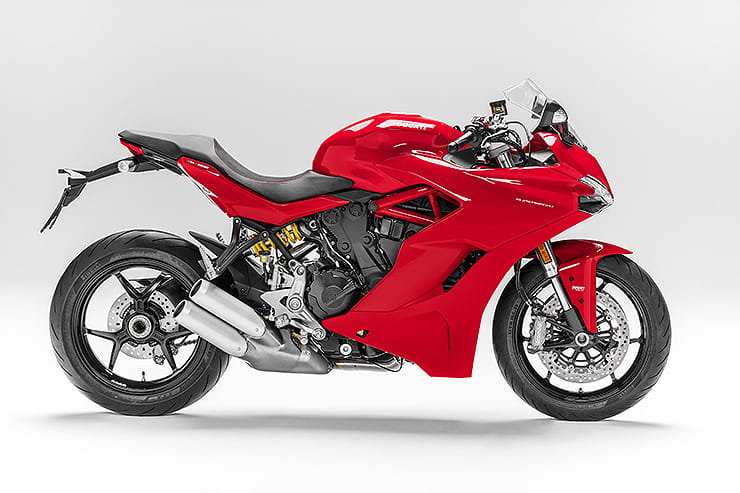 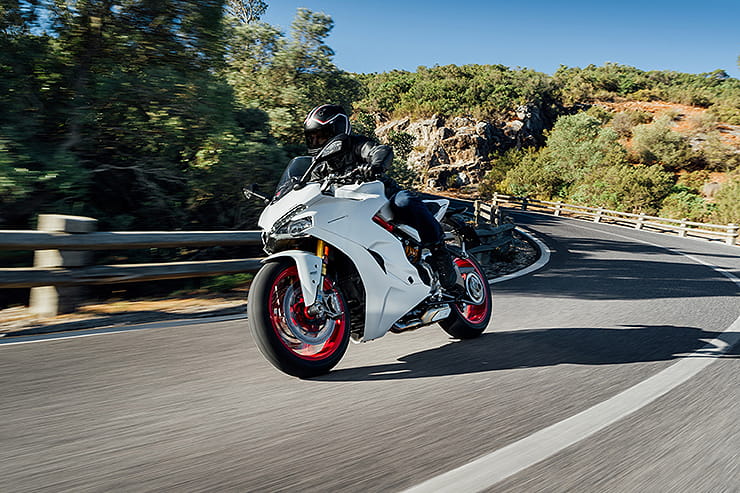 Billed by Ducati as a sportsbike for those who want something a little bit more chilled-out than the firm’s full-on Panigale models, the SuperSport and its higher-spec brother the SuperSport S arrived in 2017. Not really sports tourers as such, the SuperSport bikes are best seen as a do-it-all Ducati sporting models that are built for road riding but are more than happy to take to the track if asked, where the Panigales’ focus is the other way around. If you want a bike that sounds right, looks cool and contains all of Ducati’s sporting heritage but won’t leave either your licence, nerves or wrists in tatters, the SuperSports make for a great option that aren’t actually that costly to buy or run. The perfect sporty Ducati? For a lot of the UK’s road riders, they probably are.

The SuperSport is only three years old now so prices remain fairly high, however they aren’t a patch on the likes of the Panigale thanks to a considerably lower initial retail price. You can pick up a 2017 standard model for around the £7000 mark with the S version upping this by about £1000 for a similar spec/mileage machine. That’s a good saving on RRP (which is currently £11,995 and £13,595 respectively). Just be a touch careful when buying private that there is no outstanding finance, so get an HPI check completed. Don’t get too excited about optional extras unless they are out of the Ducati Performance catalogue, which are worth paying a few quid for if you want them, especially the Akrapovic ehaust.

Both SuperSport bikes are powered by the same 937cc Testastretta engine, which can be found in a few other Ducati middleweight models. A charming V-twin, once you get over the usual low rpm stutter it is a really relaxed motor with lazy power delivery and lots of mid-range, making it deceptively fast. You can lollop along on the SuperSport with ease and should you feel the need to up the pace, it is happy to respond. It’s not Panigale V4 fast (or even Panigale V2 fast) but it is rapid and with a claimed 113bhp and 71.3 lb-ft of torque (all of which is delivered before 9000rpm) it is more than enough for brisk road riding and doesn’t vibrate too badly through the bars. The mirrors, however, are a different story...

Yes, yes, it has cam belts but unlike Ducati models of old, the SuperSport doesn’t require them being changed every two years, meaning it is considerably cheaper to run. The SuperSport requires an annual/9000-mile service and a ‘desmo service’ every 18,000 miles or 60 months. The desmo involves valve clearances being checked and the belts changed and is now a specific mileage (or five years) service rather than every two years. Expect to pay roughly £200 for a small service and £750 for the desmo. The motor itself hasn’t thrown up any worrying unreliability issues and the gearbox is also solid however the SuperSport was recalled in 2018 due to interference issues with the gear lever and pivot pin and the S was recalled in 2018 due to an incorrectly routed fuel tank and/or airbox drain tube, so ensure the work has been completed. The S model comes with Ducati’s DQS system, which is a two-way quickshifter, which can be added to the stock model for £205 as a ‘plug and play’ Ducati accessory. A lot of owners swap the stock twin exhaust  pipes for aftermarket accessories with official Akrapoivc items popular. There are loads of different styles and brands on the market from standard single cans to twin high-level (like the Panigale V4 WSB/BSB bikes run) options. 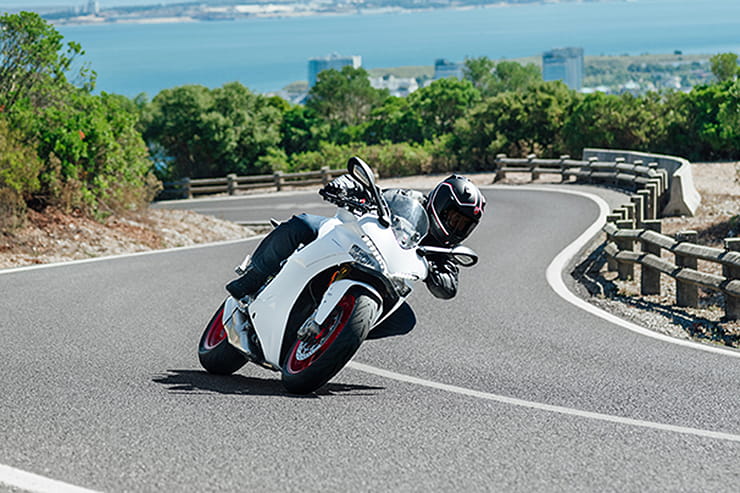 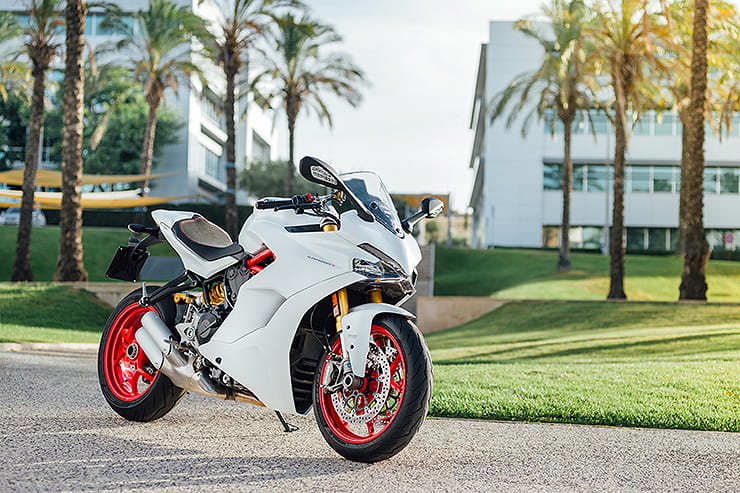 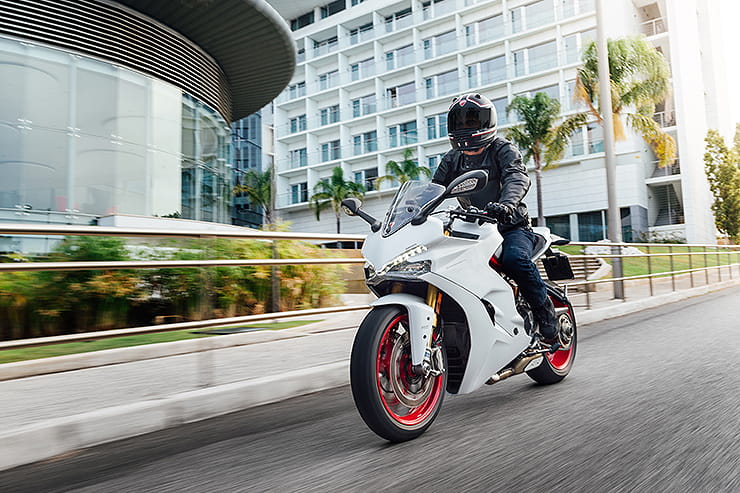 The SuperSport can record a very pleasing 49mpg on open roads with this even sneaking into the low 60mpg numbers when steadily cruising. That’s not bad at all and means you can fairly confidently expect to get over 170 miles from its 16-litre tank.

The SuperSport is sold in base or S model and as you would expect, you get some lovely Öhlins bling on the S with its suspension from Sweden where the base bike has Marzocchi forks and a Sachs shock. While both fork options are fully-adjustable, the Sachs shock lacks compression damping control where the Öhlins unit is fully-adjustable. Does it make a difference on the road? While the S is certainly more poised on its suspension and noticeably more accomplished if you are on track, there isn’t much wrong with the cheaper units for 99% of the time, they just lack the kerb appeal. Given a twisty road, both SuperSport models are excellent with a typical Ducati mid-bend composure and a lovely light feel to their handling. Just because it isn’t a Panigale model doesn’t mean you can’t have a right laugh on the SuperSport bikes and they are very accomplished in the bends. Aim to flow through the corners rather than hammering the brakes and accelerating hard and you will absolutely fall in love with the SuperSport. Although not its mirrors, which are a bloody disgrace and are basically useless at anything over 30mph. Owners have resorted to either fitting bar-end mirrors or adding rubber washers in a (generally futile) attempt to damp out the vibes! Weirdly, later models seem less prone to mirror vibes, so maybe Ducati did a subtle tweak...

Ducati have most certainly not skrimped when it comes to the stoppers and both SuperSport bikes carry Brembo M4-32 radial monoblock calipers with radial master cylinders and braided steel lines. ABS (non-angle sensitive) comes as standard and they are more than up to the job on either the track or road. 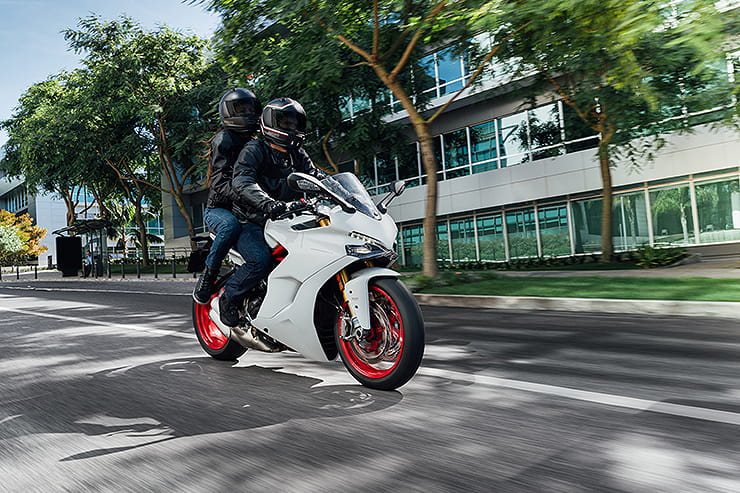 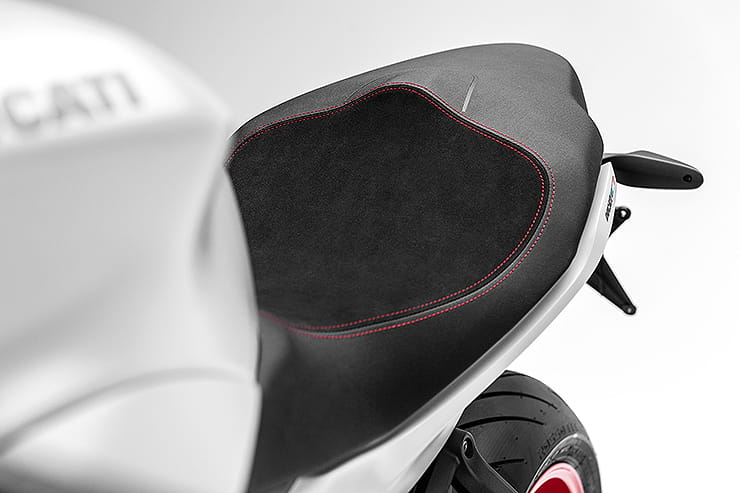 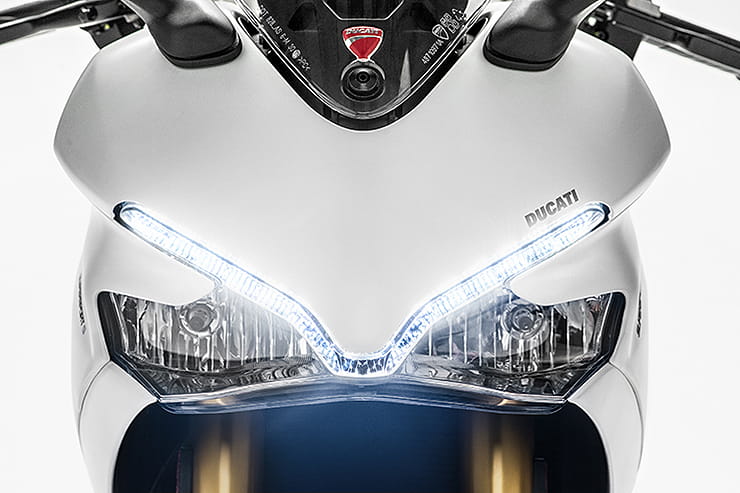 It may not be billed as a sports tourer, but the SuperSport can certainly be used as one and Ducati sell a Touring Package (see below) that makes it even more practical. A comfort seat (£230) is a good addition as is a taller screen and if you want to take a pillion you will probably need to buy the optional extra grab rail, which is £100. So yes, touring and distance work is most certainly on the menu.

The SuperSport is sold with the option of the ‘Touring’ package for £1221.82 that consists of a taller screen, heated grips and expandable side panniers, the ‘Sport’ pack for £1413.60 with Akrapovic silencers, smaller indicators and carbon parts or the ‘Urban’ pack for £399.06 with steel pegs, a tank bag and an alarm. Naturally, that’s just the start and you can get a full exhaust system (£2098 plus £931 silencers), heated grips (£256.58), carbon parts, levers, crash protection, and lots, lots more. The world’s your lobster as they say, although probably not in Italy.

Some will view the SuperSport as a bike aimed at those who are too scared to buy a Panigale – however this is far from the case. Just like the Super Sport bikes of old, the all-new SuperSport is a relaxed and friendly Ducati sportsbike that is fun to ride while still containing a good degree of sporting prowess. Its mirrors are a disgrace but the rest of the bike is really good fun to ride and not that badly priced considering it has Ducati written on its tank.

Three things we love about the Supersport… 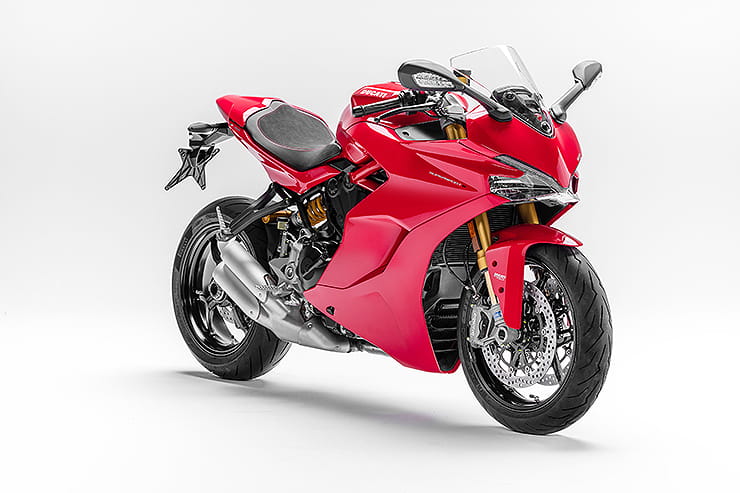 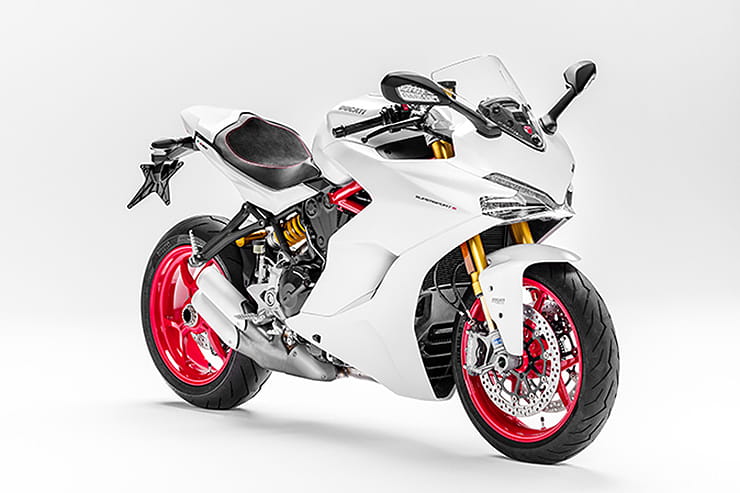 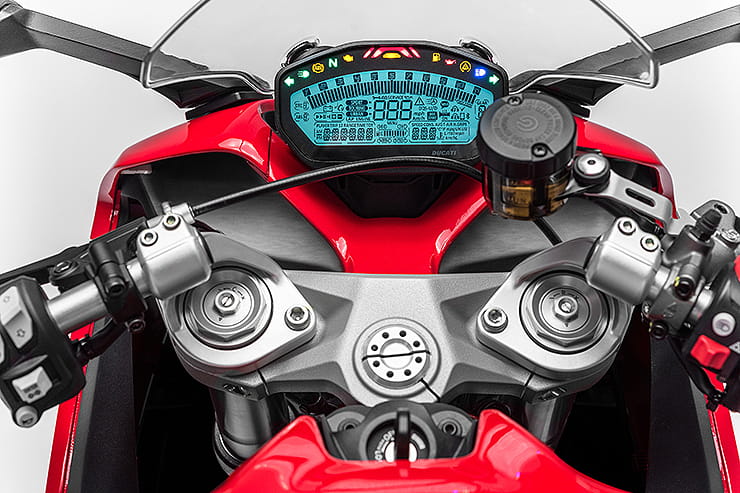 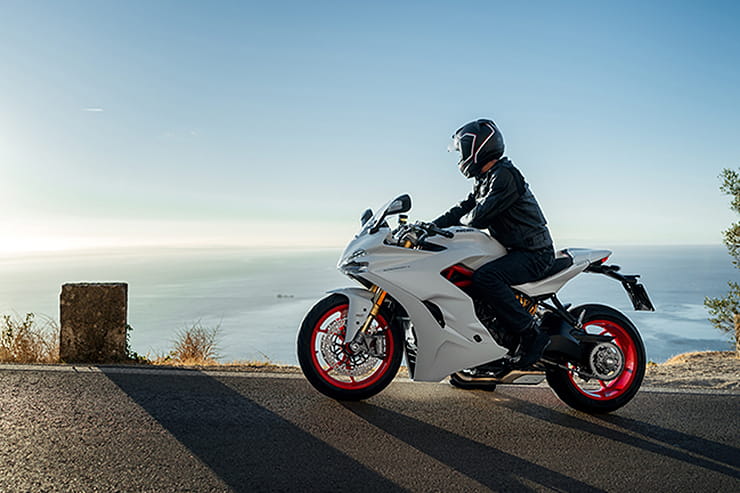