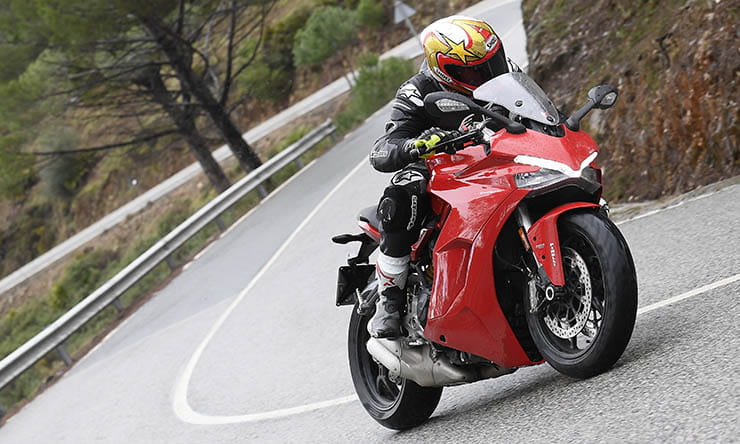 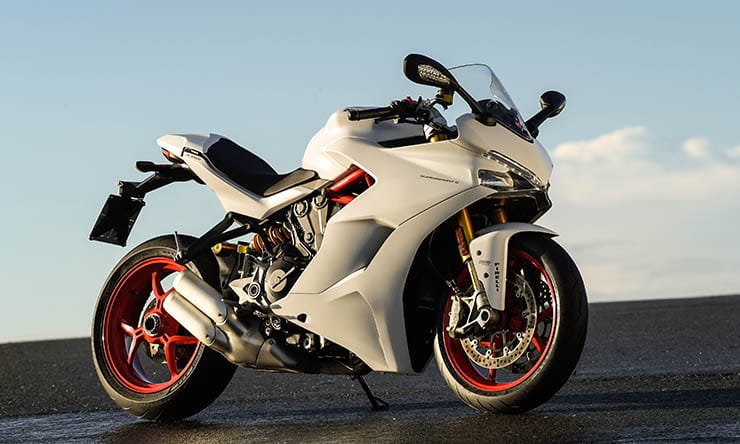 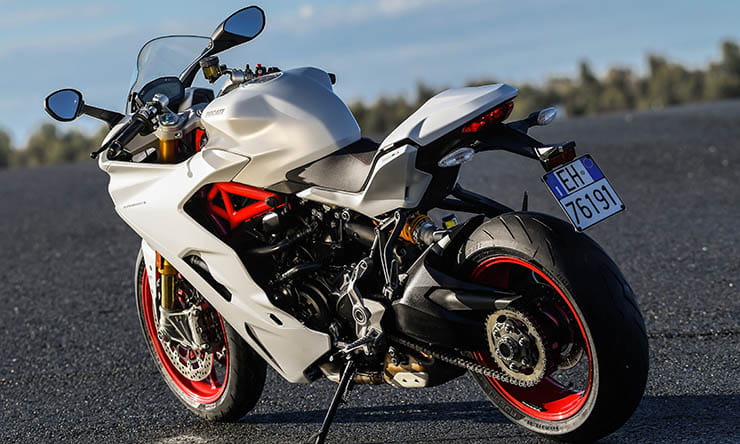 Sports bikes. Have they got just bit too much? Discuss. Time was back in the day that Ducati’s 916 was making around 113bhp, and the world loved it. Admittedly that was a very long time ago but it’s still held high as an iconic sports bike. Now we’re up to 200bhp and for most people they’re just too nuts to use on the road. And rightfully so.

With some of the world looking for a practical sports bike that you can use every day, chuck down a back road with aplomb, and do the occasional track day, Ducati has created this – the new SuperSport and SuperSport S. It even does 9000 miles between oil services.

The new SuperSport leads on from the long lineage of Supersport and/or SS bikes in Ducati’s range. It reaches right back to Paul Smart’s famous Imola 200 winning bike in 1972, and the great SS models of the Seventies, the later 900SS, Superlight, 750SS and 600SS of the Nineties, and the later Pierre Terblanche designed pointy nose Ducati SS models. It has a lot to live up to then.

With a 937cc L-twin Testastretta 11 motor making 113bhp and based on the engine from the Ducati Hypermotard and Multistrada 950, a sporty chassis with fully-adjustable suspension, and styling derived from the Panigale – Ducati’s SuperSport S is one sexy mother. And then you get to ride it. Don’t worry, it gets better.

It may be a softer option than a Panigale, but that’s fine. Just look at it. Especially in the white S version we tested on the track. It has the sculpted nose of the Panigale family but sits a bit higher, a bit wider, a bit taller. The bars are high, more VFR than sports bike, yet it still feels small, yet comfortable. The seat is plush and comfortable, the screen is adjustable – either low or high, and a touring screen is available as an option. The pegs are sports bike high, and not quite as roomy as I’d hoped, but then I am six foot four inches tall. There’s even room for a pillion, with optional grab rails and comfortable, bigger pillion seat available as options.

As you’d expect on a new Ducati in 2017, there’s high-quality kit and it’s beautifully made too. Like the 959 Panigale, the matt finish on the white S is lush. You get an LCD dash, riding modes for rain, touring or sport, which adjust the levels of traction control and ABS to suit each setting, the ABS can also be turned off at the rear if you want that set-up for track days.

It can do track, but that’s not its natural home, this is all about comfortable, practical road riding with plenty of sporting kicks thrown in. But we got to ride it on track anyway...

It’s the perfect combination of a soft and friendly, but a neutral steering chassis that holds a line in corners with amazing feel from the Ohlins front and rear suspension. The standard bike has a Sachs rear shock and Marzocchi front forks. The S has fully adjustable suspension front and rear. On the standard bike, it’s adjustable for pre-load and rebound at the rear and fully adjustable at the front. It’s ultra-stable in fast corners, yet steers sweetly and neutrally in slower corners.

In this engine tune, the same as the Multistrada 950 but with different crankcases as the motor is mounted directly on the frame, makes 80 per cent of its torque from just 3000rpm, peaking at 6500rpm and with maximum power of 113bhp at 9000rpm. It has a flat power delivery but feels like it hangs on to revs longer than the Multistrada 950, but that may have just been my brain.

The basic trellis chassis is taken from the Monster 821 but features new mounting points for the front headlights. Essentially the motor is the chassis as it’s rigidly mounted to the engine.

On paper, 113bhp may not sound like a lot but actually it is plenty. For the real road, and even the occasional track day it’s a good balance.

On the pipe, approaching near flat-out on track, it has a motor with enough punch to hit 140mph down the back straight at the Monteblanco circuit near Seville in Spain. Even in soaking conditions (admittedly on wets on track) the traction control never gets in the way of compromising the sports nature, even in the wet and on level seven out of eight. You can feel it cutting in, saving you from harm, but it’s subtle and perfect for greasy, wet roads in the UK. Switch to Sport mode and the bike picks up cleaner, the map is more aggressive but gives you better feel and it pulls out of fast corners with the traction control light flashing when on setting three. It’s a fantastic safety aid.

It’s massively comfortable on track too. Our track bikes had a higher touring screen fitted for extra wind protection, and an aftermarket Akrapovic titanium and carbon end can, but other than that, the wets (we’ll come to those), and a softer suspension set-up, the bikes are standard. 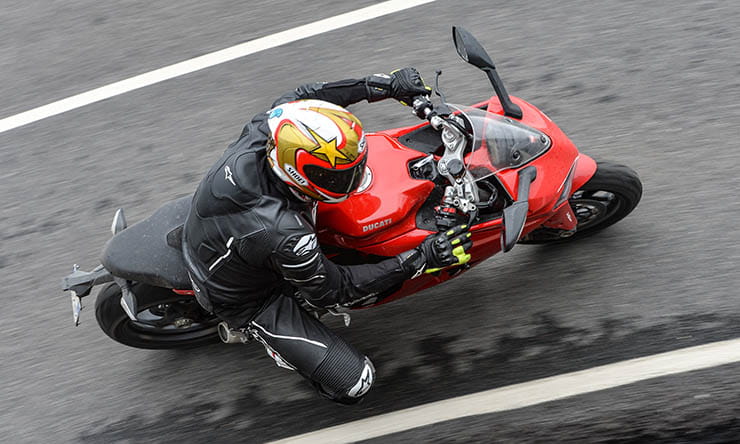 There’s none of the harshness you’d get riding a full-on sports bike in the wet on-track where you’d be feeling for grip through the stiffness of the chassis. This is pure sports adrenaline in a rider-friendly package.

It’s sheeting it down with rain when I first get to ride the Ducati SuperSport S at Monteblanco, on circuit and I’m nervous as hell about it.

Because the conditions are so bad, and for safety reasons, Ducati has ditched the standard Pirelli Diablos Rosso III tyres, and fitted racing wets. You could argue that it’s not a true test of the bike. I’d argue against it, because the extra grip of the tyres lets you feel the delicate chassis movements and low speed throttle control in some of the tighter hairpins.

The standard up and down quickshifter on the S version is sublime. It means you never have to use the clutch except for stopping and pulling away. Just tap the lever up and down. Up sees a seamless shift and constant power. Hit the lever down and it auto blips so the engine matches the revs.

Even with wets you can’t ride it like it’s dry, and that means you hit revs as low as 3000rpm and wind the gas on, feel the softened up rear squat but drive hard. The front has been softened so it feels light under power but is stable as hell. Hit the Brembo brakes on track and they have bags of feel and power. It dives a lot, but this isn’t a track bike and you get good feel from the front. Those handlebars are designed to be comfortable rather than track-focussed, but the riding position lets you hang off the bike and feel where you’re at.

But this is still a sports bike. It’s not a big, soft, floaty sports tourer.

Later on, the road the bike impresses even more. The motor feels even stronger on the road. It pulls cleanly from 3000rpm, and even back on standard tyres it finds grip using the fantastic chassis. We rode the standard bike on the road, and instantly forgot how to change gear. There’s a long throw to the gearbox, more noticeable on the standard bike without the quickshifter. I’d recommend getting the quickshift and auto blipper fitted to the standard bike. It’s a plug and play job straight in to the dash. It makes the SuperSport feel really special. Ducati say it costs £160.14 plus VAT and fitting. If you could stretch to it I’d recommend it.

The Sachs rear shock doesn’t have the same floaty, beautifully damped feeling of the Ohlins on the S version, but it does a good job, as do the Marzocchi forks. The damping feels a bit harsher. Set up on our road bikes was actually a bit stiffer than the track settings though as the bikes were set softer to cope with the racing wet tyres.

At slow speeds, it feels every bit a big Ducati in terms of its motor low-down grumbling away, but its manageable, easy to rider and very friendly. Urban mode cuts power, but makes it dead easy to ride slow. Touring is a strange map that tends to numb the feeling you get from the throttle then gives full power and response further up the rev range.

It sits at 75mph around 4000rpm, and there’s loads of overtaking grunt from those revs in top gear. The screen is best off in its high position for any serious wind protection, but the side fairing jeans your knees sit comfortably out of the wind. However, if you thought this was a sport tourer in the true sense, it’s not. The pegs are high, sports bike high nearly. The bars are quite uptight in comparison.

High footrests aside, the motor is strong and it’s easy to turn, steer and feel ultra-comfortable with on the road. The chassis itself, combined with those Pirelli tyres give you bags of confidence in the wet, too. And those Brembos and the ABS set-up means you can always be confident in squeezing the lever hard wet or dry, with plenty of power and a nice feel at the lever.

The SuperSport is not as sports touring as I thought it might be. It’s still very much a slightly more comfortable, more upright sports bike. Its handling, chassis and generally sportier nature is leagues apart from something like a Honda VFR, for instance.

But you could do distance on the Ducati SuperSport easily. I love the way it rides, it inherits the style from the most beautiful motorcycle in production (the Panigale), and it can cut it on track days or on fast road rides with mates on sports bikes. It will do the commute easily with style and panache, something you just don’t get in the officer bike park with most Japanese bikes.

The more you ride it, the more the SuperSport grows on you. It’s a practical Ducati for the generation stepping up from naked bikes and fancy something a bit sportier. But this is no sports tourer, it’s still a sports bike, a Ducati Panigale for the softer generation, those who don’t want to be cramped up on a sports bike. It’s just one that’s a bit sportier than most so-called all-rounders. 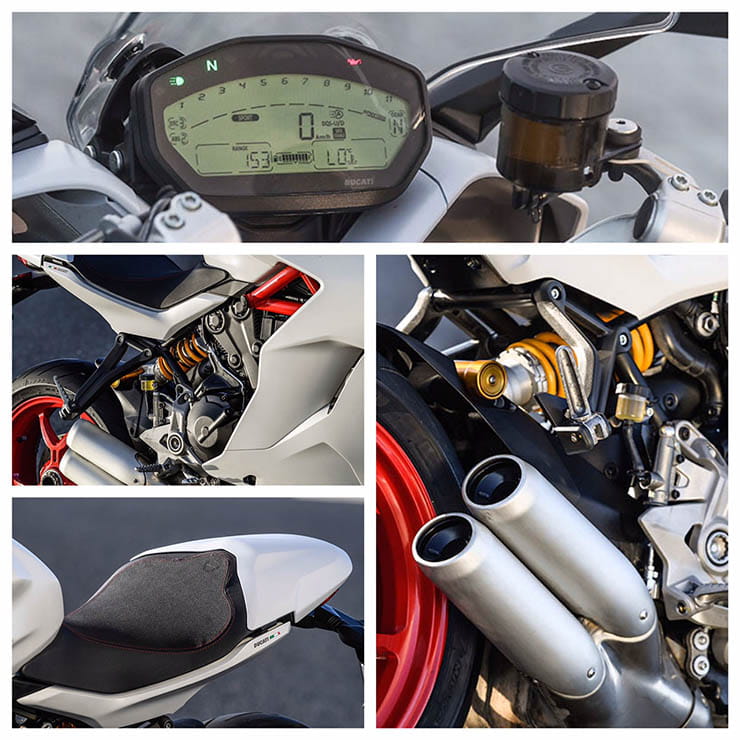