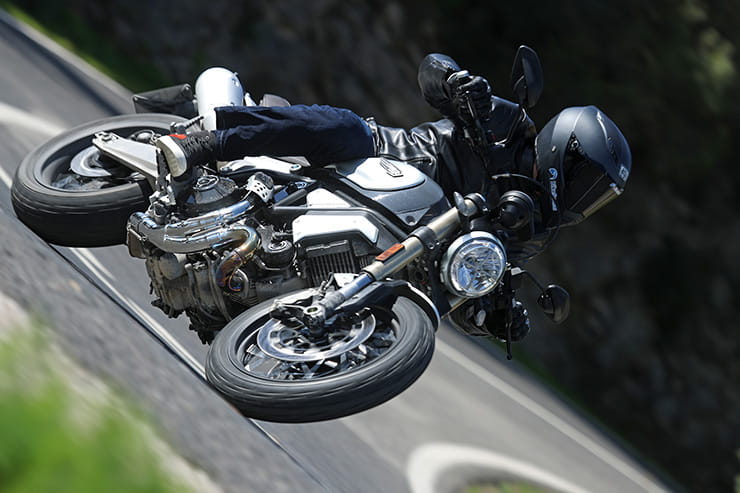 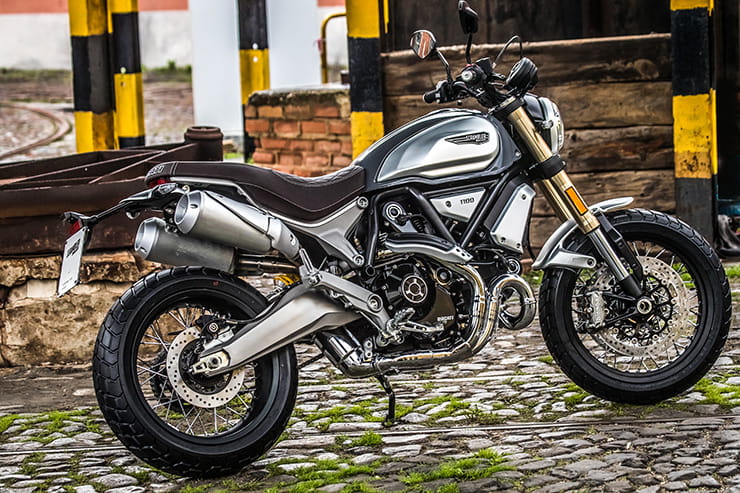 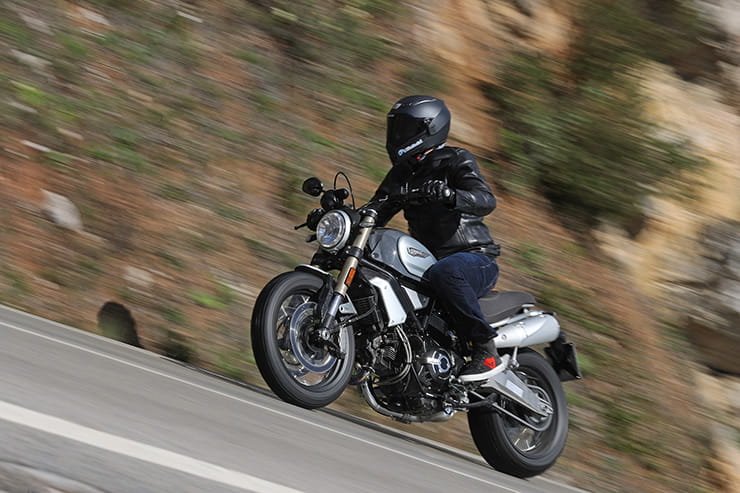 Three versions of the new Ducati Scrambler 1100 make up the new range with subtle differences of trim and tech between them: the base model, Special and Sport are priced from £10,695, are powered by the 84.5bhp, air-cooled, 1079cc L-Twin and offer far more than just a lazy, chilled ride!

Feeling like the cat that got the cream as I strutted around the streets of Lisbon at the International Press Riding Launch and then out into the hills south of the city on the Special version, the new and biggest of the Italian firm’s Scramblers has all the build qualities and chic-ness gained from its smaller 399cc and 803cc siblings that have paved the way since 2015 in this fashion-conscious Ducati sub-brand. 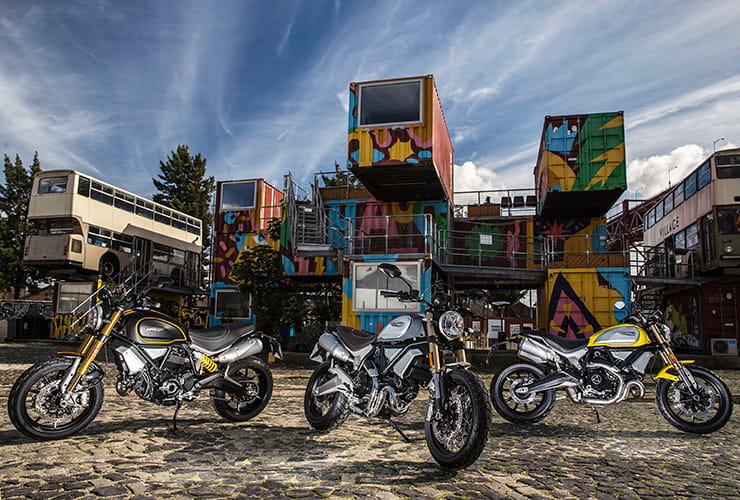 Ducati introduced the world to a 21st century Scrambler range at the end of 2014 ready for the 2015 model year. Not one but four of them, all using the 803cc air-cooled V-Twin. Roll on three years and 43,000 have been sold worldwide in time for the latest members of the fleet. Just like the original Scramblers back in the 60s where a 250, 350 or 450 were the options, nowadays the 800, which has already been complimented by the entry-level 400cc ‘Sixty2’, has a larger capacity sibling – the 1100.

The bespoke brand has been targeted and marketed perfectly, those sales figures don’t lie and it was a brave move to draw the attention of a bike away from its speed, power or touring ability and concentrate on the style and how to get the proper rewards from riding. The Monster range is its nearest match but the big 1200 comes with masses of power and rider aids whereas the Scrambler 1100 is refined enough but in a simpler ‘just get on and ride’ kinda way. 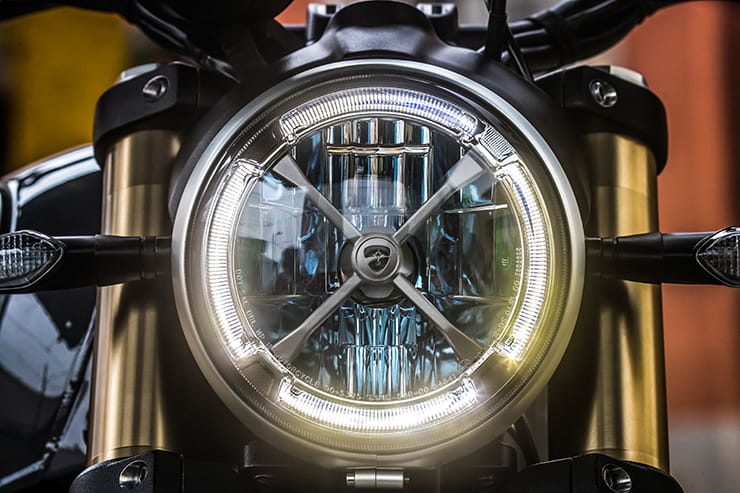 Four colours across three models is how the new range lines up with the Standard bike joined by a Special and a Sport. Here’s their key points:

Meanwhile, the Scrambler 1100 Special is priced at £11,495 and has adjustable Marzocchi forks and shock plus black aluminium spoked wheels, 18" at the front and 17" at the rear, an aluminium front/rear mudguard, brown seat, chrome exhaust pipes and gold-coloured anodized fork sleeves. It’s available in ‘Custom Grey’ with a black frame.

The Scrambler Sport heads the trio in terms of price at £12,295, and style in my opinion. It’s signature feature is not only the colour scheme but also the adjustable Ohlins forks and shock. 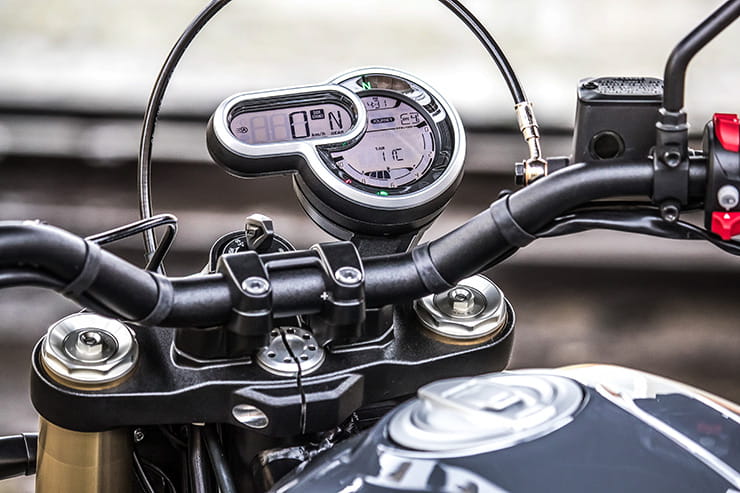 This is not a bhp-laden monster, or should that be Monster, so rather than focus on the peak power output of which the 1079cc air-cooled L-Twin produces the power of 84.5 British horses at 7500rpm, even the torque figure of 88Nm isn’t that blow-your-socks-off amazing. It’s about where it makes that peak torque, at 4750rpm. Ok, so a twin will rev lower than those engines with three or four cylinders but the Scrambler 1100 is all about the silky smooth delivery of the power and the grunt it gives down low. The model wasn’t designed with sport in mind despite one if the band’s members being called ‘Sport’, it’s the same reason why a quickshifter was neither fitted as standard nor offered as an official aftermarket accessory. 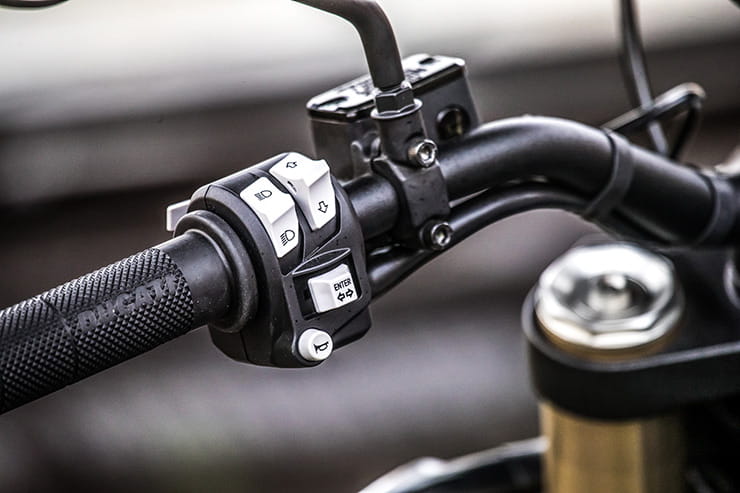 The engine’s user-friendly. An on-point ride-by-wire throttle and low-mid torque that when worked hard (to the stop) will make mincemeat of an overtake are clues to the essence of the Scrambler brand, i.e. it hasn’t been designed to grab you by the short ‘n curlys and throw you towards Mach1 yet instead be the cool, calm, collected one that plods about offering a sensible yet quality ride. Style mixed with a large helping of substance. 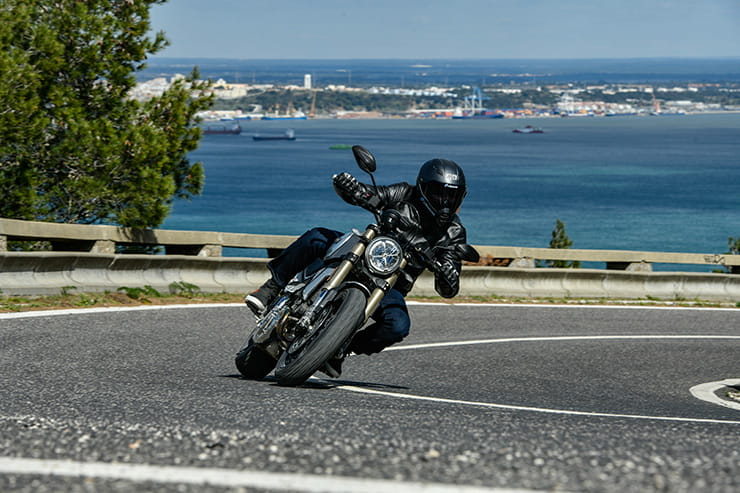 Its heartbeat comes from the old Monster 1100 Evo but with significant enough upgrades to make it Euro4 compliant including those gleaming chrome exhausts. Though how long they’ll stay gleaming and shiny is up for debate. I’m all for a bit of bling but for me it doesn’t really match the grey colour or suit the bike and I feel it’s a little ostentatious for a machine that is supposed to radiate 'cool'.

Ducati have got the ride-by-wire throttle connection spot on. It’s very smooth making it an easy bike to ride, even though it’s operating a sizeable air-cooled twin cylinder engine. A lightweight clutch lever and gearbox combination also help. Both the brake and clutch lever are adjustable to suit your span making it even easier to control in low-speed town riding as is the well positioned rear brake lever, while first gear is tall enough to stick with as the revs murmur along between 2-4,500rpm. 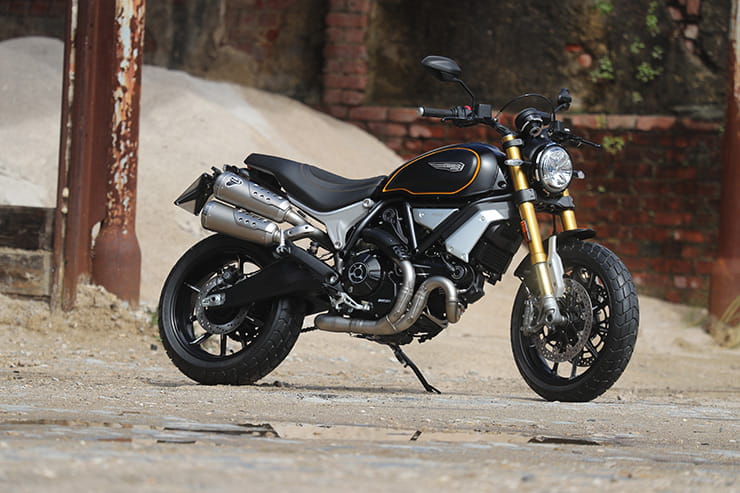 With a ready-to-go weight of 211kg, the Scrambler 1100 Special can be considered a class-leading lightweight compared to the BMW, Kawasaki and Triumph I believe it competes with (see the rival table below). A longer wheelbase (by 69mm up to 1214mm over the 800 Scrambler), larger fuel tank (up by 1.5l to 15l) and taller forks (by 4mm to 45mm) add to the increase in weight and yet make the bike nicely stable on smooth roads.

Onto the bumpy surfaces and the front gets a little lively, like its been sprung too stiff. Thankfully the hi-spec Marzocchi forks are adjustable so a quick nip to decrease preload and it should soften up nicely. I had no complaints with the rear suspension, a side-mounted Marzocchi monoshock which is also adjustable. For reference, I’m 6ft tall and weigh a shade over 14st. 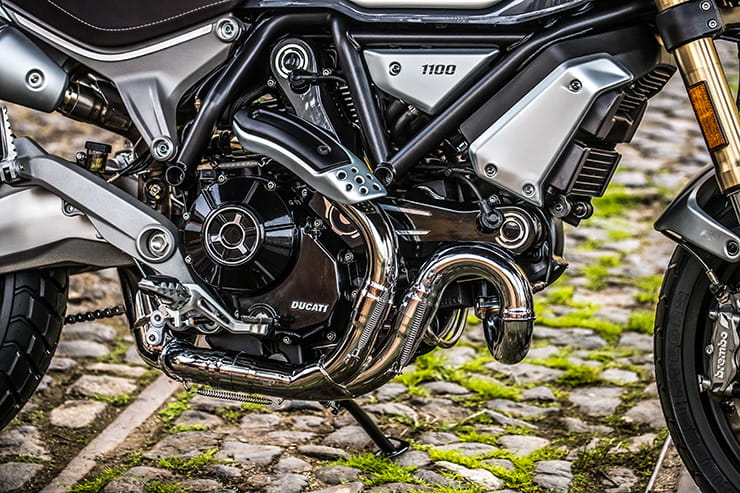 The new chassis and sub frame mixed with the mega Pirelli MT60RS tyres that, despite looking like they should be greenlining, actually offer loads of grip in both the wet and dry. It’s a tidy and pleasantly surprising combination for a bike that has no sporty interest and it handles better than expected. The 18” front and 17” rear wheel have wire-spokes rather than cast alloys on the standard bike and the Sport model.

One of the big differences between this, the largest of the three modern day Scramblers and the 800 is the additional 320mm brake disc on the front. And with the cornering ABS-assisted Brembo M4.32 callipers and some strong yet non-clunky engine braking, the Ducati will have you stopped in no time. 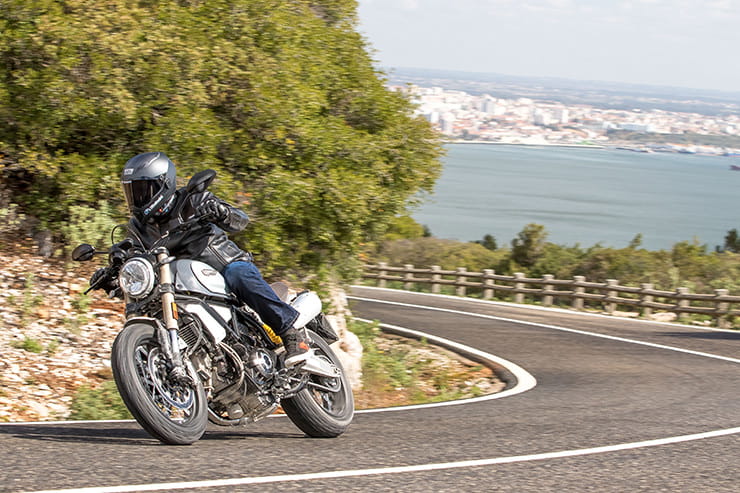 Style is what a Scrambler Ducati lives and breathes for but thankfully a beard and pocket-to-belt loop key ring chain are not pre-requisites to ride one and in terms of panache then there are few better-looking nakeds on the market. Glazing over the array of leads, wires and cables that stick out all over the place, the build quality is high. Neat finishes around the fuel tank and bar ends are worthy of inspection to see how much care and attention has been afforded from within the Bologna factory.

The height of the well-crafted brown seat sits at 810mm which is both wide and comfortable. The bum-to-feet height ratio is fairly shallow yet still comfortable and, while similar to that of the 800 Scrambler with a 790mm seat height, is due to the high footpegs that offer good ground clearance too.

Hands are positioned wider than knees but that’s the Scrambler way and for the first 20 miles of the press ride I was convinced the bars needed to be at least 10mm closer to me and, while a quick shuffle to give me a more comfortable riding position helped, the jury is still out as to if they would be comfortable on longer trips. 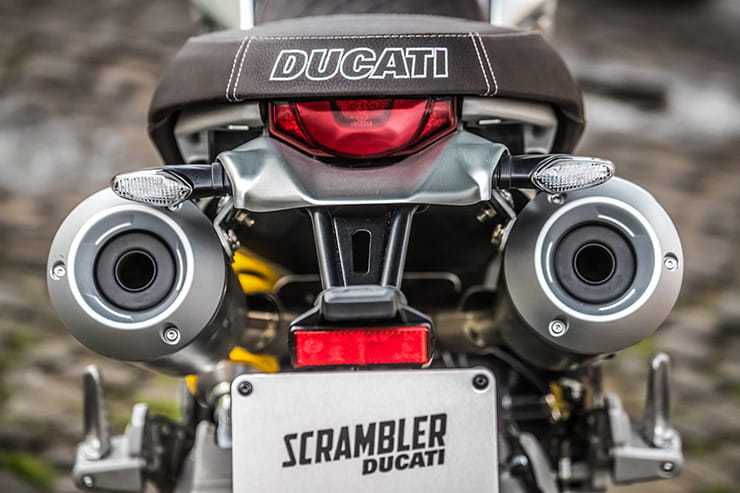 Aside from the likes of the Bosch-enabled cornering ABS, four-stage traction control and riding modes, the tech level is deliberately low to fit with the ethos of the Scrambler brand, by comparison to the majority of modern bikes.

The three riding modes are easily interchangeable while riding. All it takes is a few seconds to press and hold of the indicator button (it has ‘Enter’ printed on it) then a toggle up or down using the adjacent and rather obvious arrow switch to select the next mode and a quick press of the indicator again. Oh, and close the throttle momentarily if you’re moving… which the LCD dash reminds you to do. 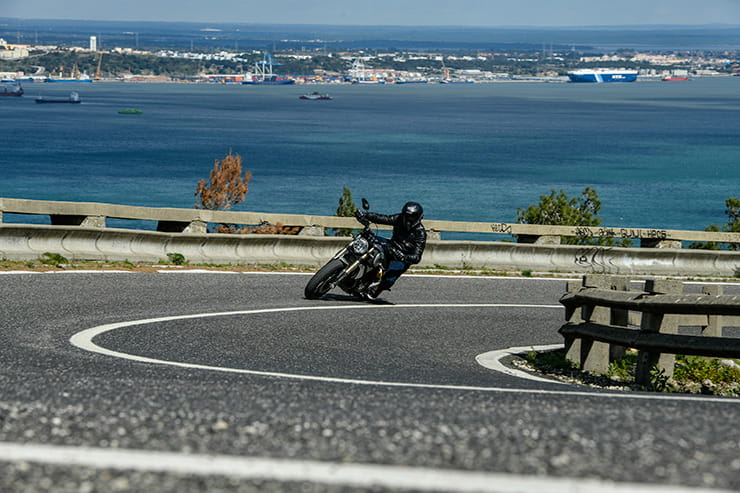 City mode is the calmest. It offers maximum traction control, a softer throttle response and cuts power by 10bhp. The more curiously named Journey and Active modes offer full power and more direct throttle responses and even when the ignition is turned on the bike remembers which mode you last rode in.

The new LCD instrument panel was designed to “preserve the Scrambler look” and yeah, it looks ok, has a dusting of old school charm befitting the style rather than the new-fangled TFT’s, is clear enough to read all the digital info displayed but lacks a bit of pizazz, the clockwise from 3-8 ‘clock rev counter isn’t so easy-to-read and there’s no current or average mpg counter. 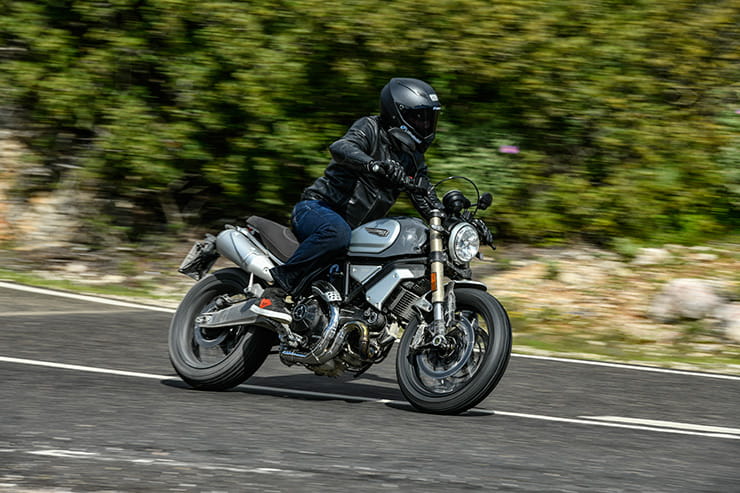 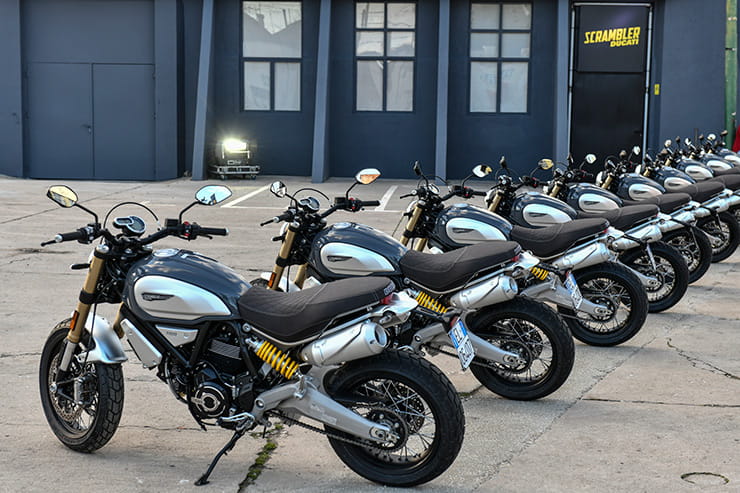 Excellent premium build quality with a few too many leads and wires hanging out of odd places that really ought to be tucked away with more care and attention. That aside, the low-mid torque is smooth and unpretentious, just like the look and feel of the range. It doesn’t need to scream and shout, instead just cruise along oozing character and coolness in a charming and comfortable manner.

£11,495 (for the Special) is a heck of lot to be ploughing into a bike that doesn’t have the versatility of others but it has a top old-school motor with top old-school styling and makes anyone and everyone feel an inch taller with pride.

Even though it’s the most expensive of the trio, I’d still opt for the Sport. Cast wheels over spokes and the black/gold paint scheme really compliments the Ohlins forks.

Is it camera phone friendly? Yes it is. Does it have a matching clothing range? Yep, jackets, jeans, tees and boots among others. Will it earn you more friends? Yes it will.

If you give in to the Scrambler’s charms you’ll be overlooking its idiosyncrasies and accepting its cool-as-a-cucumberness ready for quirky but simple and above all else, enjoyable ride. 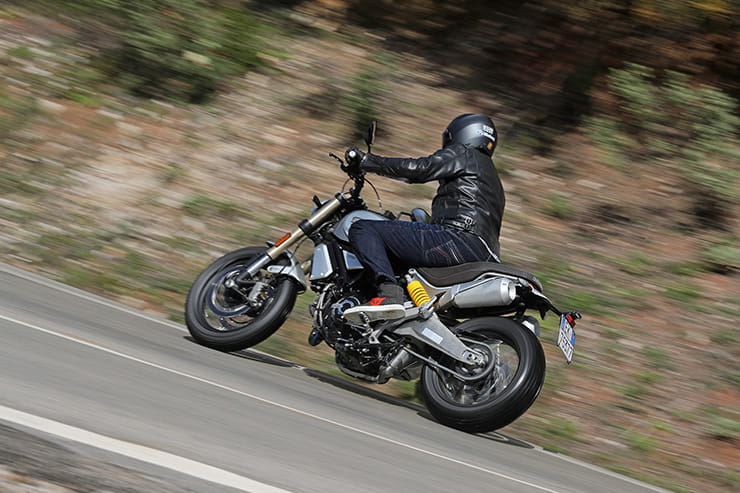 Three things I loved about the Ducati Scrambler 1100…

• Smooth throttle and torque from the engine

• New instrument panel is a bit too basic inc. no MPG average

• Could do with a tad more power, just 15bhp would compensate for the extra weight and give it a little more life plus distinction from the 800.