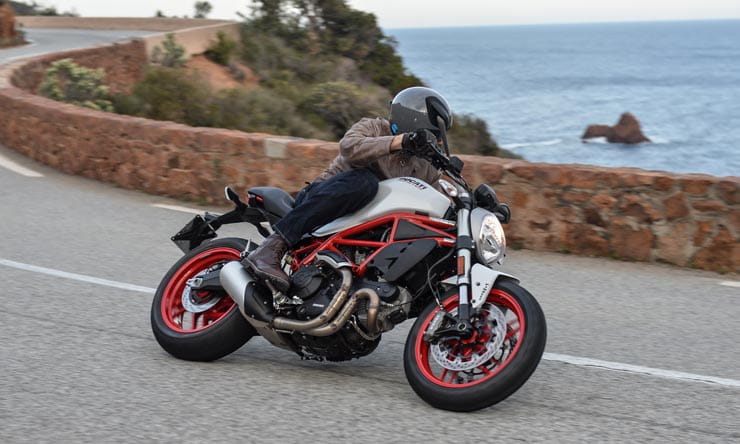 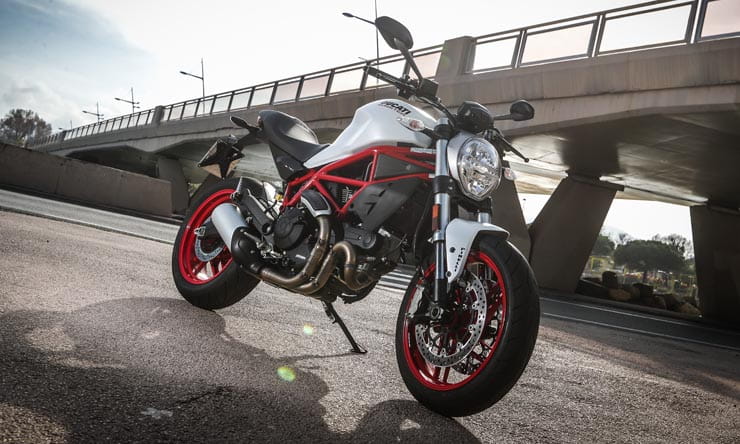 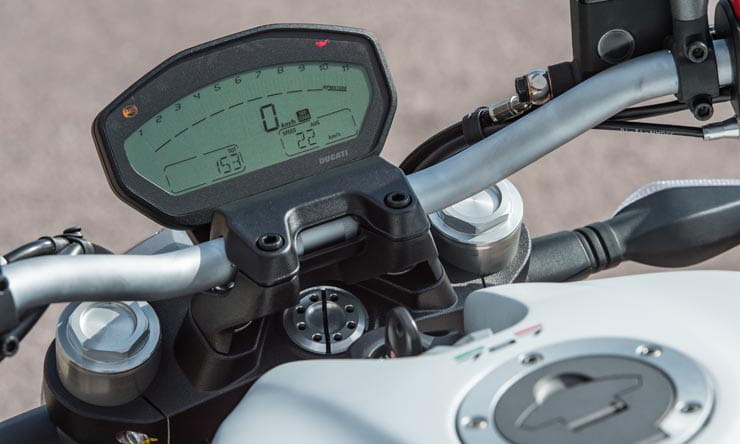 When a Monster 821 is just too much for your wallet or your licence level, along comes Ducati with its new, entry-level, Monster 797. It comes in at £7895 if you buy one in red, or another £100 for a white one.

The Monster 797 is a cool-looking bike. Parked in the low evening sun on the French Riviera for this press launch, the Monster 797, in its almost pearl white paint, is every bit a fully grown-up Monster to look at. It should be too. At just under £8000, that’s a fair chunk of cash compared to a Yamaha MT-07 at £6099, or a Kawasaki Z650 at £6099. But then they are very different bikes in reality. The Ducati is classy, oozes style and passion. 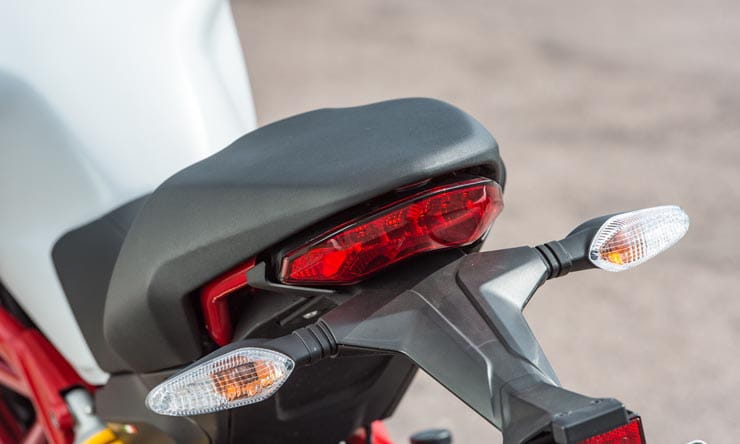 The Ducati is classy, oozes style and passion

Also, those bikes don’t say Ducati on the tank, and round here in a place that millionaires come to play, that matters. The suspension, the brakes, and the finish is leagues ahead of most of those bikes, except maybe the Yamaha, which is on a par.

The frame is a new steel trellis with a side mounted shock, the swingarm is new but evokes the shape of the old Monster 696. But that open frame, that technical mass that almost becomes the style of the hunched forward bike means it’s a Monster in every way. You could park it next to the Lambos and Ferraris outside one of the fancy hotels with super models tripping down the stairs, and it wouldn’t look out of place. I’m not sure you’d get the same reaction with a Suzuki, dare I say it. Brand is everything for Ducati and although this is the cheaper end of their range, it’s every bit as classy as their bigger bikes. 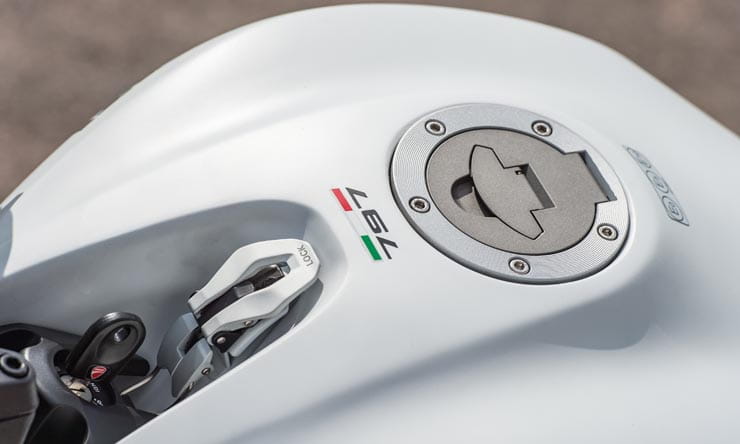 The original concept for the very first Monster, back in 1993, came from its creator Miguel Galluzzi, who wanted to create an easy-to-ride, simple, air-cooled motorcycle that was no more than just a frame, engine and wheels. In the same way the cheaper £7650 Scrambler Icon offers the same kind of concept, the Monster 797 does the same but in a muscle bike guise. But surely that Scrambler is the cheapest Ducati on the market, I hear you say? Not according to Ducati, who classify that as a different brand. I’ll let you make your own mind up about that…

The Monster 821 is a whole new level of money, coming in at £9595 in red, and with a whole lot more power too - with 113bhp compared to the 797's 75bhp. This is an entry-level bike for new riders, but designed to be flexible enough for more experienced riders too.

To put those numbers into perspective, the original M900 of 1993 made just 67bhp, and that il Monstro was widely regarded as a bike true to its name thanks to its savage mid-range. Oh, how times have changed. But, the Monster has been a massive sales success for Ducati since then, selling well in excess of 315,000 bikes worldwide from its various guises including the smaller 600/695/796 versions. 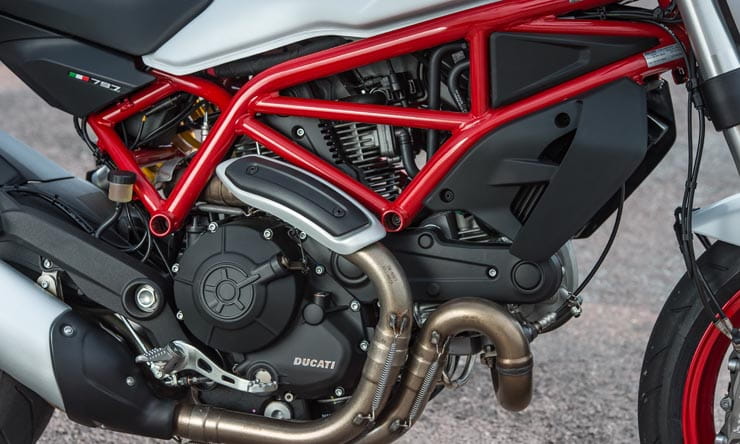 So to this, the latest in that historic line then. The Monster 797 uses Ducati’s most basic air-cooled motor, that stripped-back classic, hunched forward Monster styling which has evolved and features the tank from the new Monster 1200, and that big red trellis frame.

Get on it and there’s no fuss, just a set of LCD clocks, that ski boot clasp holding on the tank (just like the original Monsters but redesigned in aluminium), and that headlight, complete with an LED positioning light, dropping away in front of you.

It only makes 75bhp from its air/oil-cooled motor, but it does it in a gentle, unassuming way that makes 80% of its maximum torque from 3500rpm.

Someone who just passed their test could get on this bike and ride it away. Easily. It’s accessible, the power delivery is smooth and friendly, there’s no clatter round town if you get in a gear too high. And there’s roll on, clean power from 2000rpm right until the lights on the LCD dash start flashing its red light at you around 8500rpm. But the torque curve is so flat you don’t have to rev it. It runs out of power at the top, but in the midrange it has enough go to put a smile on your face. The noise may be stifled by Euro 4 regulations, but it sounds every bit a Ducati too. There’s a slight mechanical sound that’s pleasing to the ear as there’s no water jacket taking out the rattles and rumbles. If it rode past and you were blindfolded you’d guess it was a Ducati, even if it’s a slightly muffled one.

There are no riding modes to get confused with, just a good, old-fashioned air-cooled lump and plenty of roll-on torque. It may not quite have the top-end rush and excitement of some of its Japanese competitors but it makes its power where most new riders will use it.

Of course, being the entry-level Monster, the bike is generally incredibly easy to get on with. It’s light too, coming in at 175kg dry, which means it’s easy to move around and feels easy to ride in town at low speeds. The seat is low enough at 805mm that anyone should be able to get in it. A 20mm lower seat is available as an option too.

Those wide handlebars, combined with grippy Pirelli Diablo Rosso II tyres that run a 180/55 x 17 rear and a 120/70 x 17 front, make it really easy to put through a set of bends. The handling is incredibly neutral and easy to get on with straight away. You can get carried away and find your feet dragging before you know it (I have quite big feet), and it installs loads of confidence, which is exactly what you want from a bike in this class. Most of our pictures were taken in a manic one hour photoshoot the night before the official riding day, but on the full test day there was a lot of rain in the mountains and the coast road near Cannes. Enough rain to scare German tourists from getting out of their coaches at scenic stops, with floods on the road, but the Monster 797 felt stress free, manageable and superbly easy to ride in the rain. 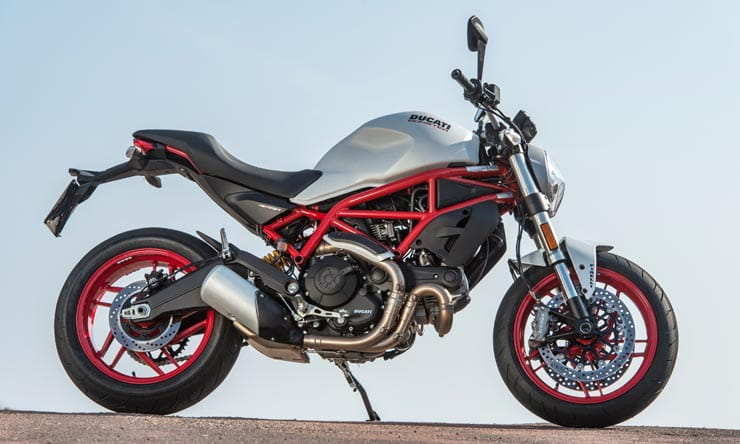 One thing though, and it’s a small thing, but it just hasn’t quite got the few degrees more turning lock that I would have expected in a bike made for essentially newer riders. It’s not bad, but it nearly caught me out when turning round in the road the first few times.

The rear suspension uses a Sachs monoshock which feels on the good side of firm at the back. The front feels a little softer, but works great. It’s a non-adjustable set of 32mm Kayaba forks at the front, but the bike is way better damped than some of its Japanese rivals. That’s just one area where the extra money goes, not just in paying for a brand like Ducati.

The brakes are proper radially-mounted Brembo M4.32 monobloc calipers with twin 320mm discs at the front, and they’re strong, almost feeling like they’re a bit too strong for the forks. But you soon get used to it and are never wanting for more power. It has ABS of course, but I never felt it come on in the dry, which is high praise indeed as we rode them quite fast at times. In the wet it simply works perfectly.

Unfortunately adverse weather conditions cut our ride short, but it was enough to be impressed by the entry-level Ducati. It’s a fantastically balanced bike that’s easy for new riders to get on with, looks like a proper Ducati Monster (cause it is), and could leave more experienced riders smiling, just as long as you weren’t expecting the 75bhp to tear your arms out. It’s a well thought out package that would give you a smile for years to come, before progressing up the range. 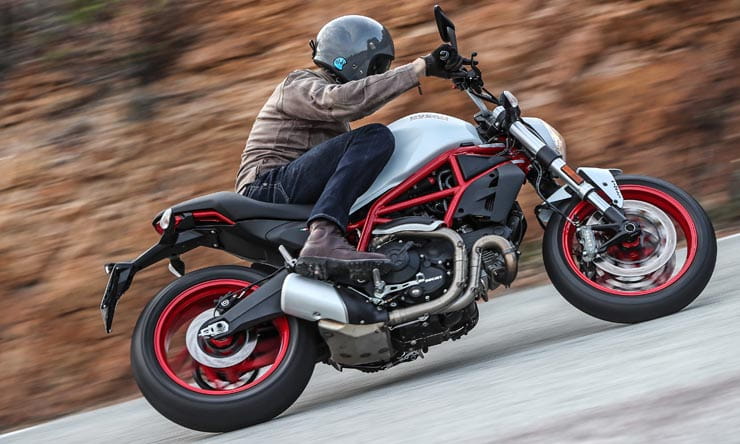