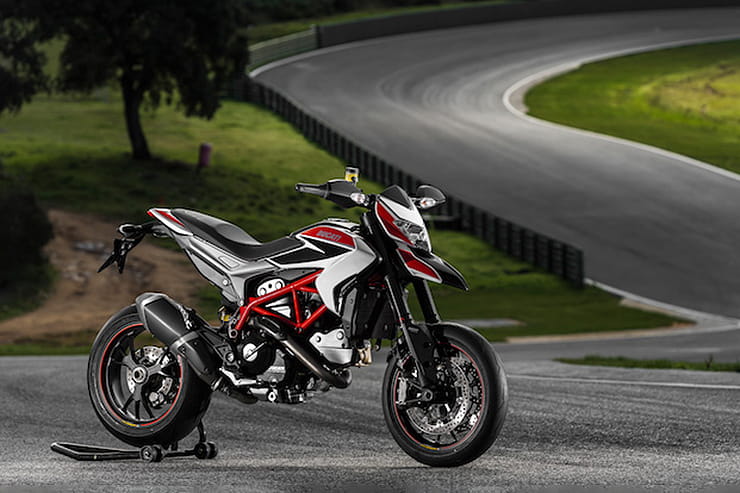 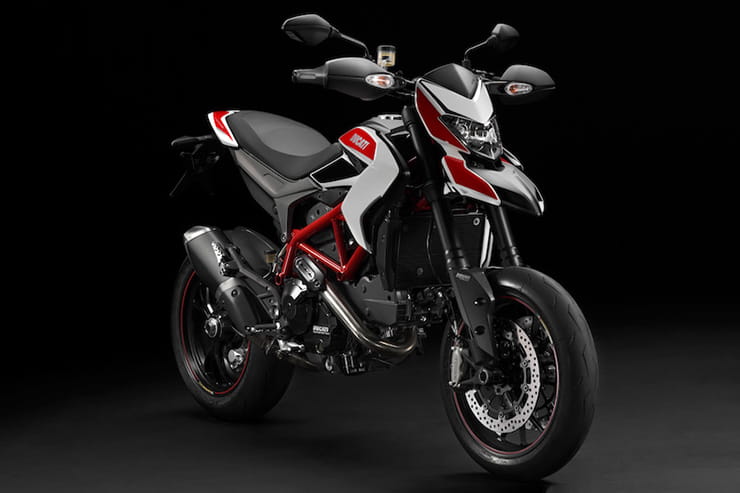 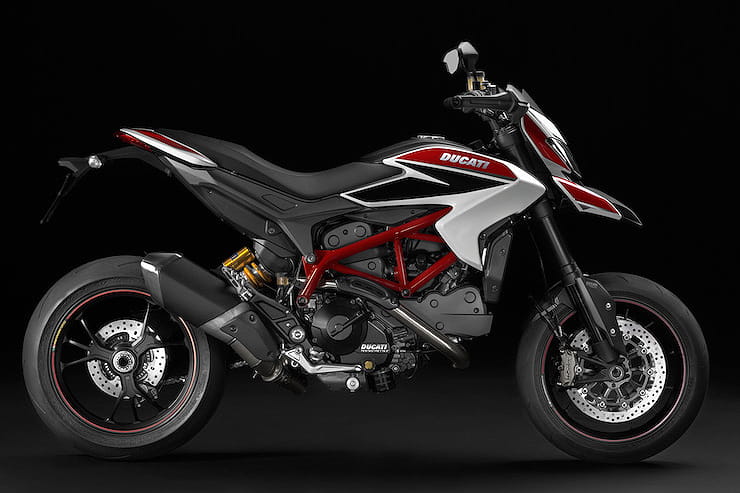 Ducati's Hypermotard 821 SP is the spawn of a devil child and delivered from the mind of a mad man. It’s the upspecced, more hardcore ‘Sport Production’ version of the standard Hypermotard 821, which was all new for 2013, and replaced the original air-cooled 1100 and 796 versions.

I have to admit that my personal feelings on the old SP were that I loved the concept but in reality it was slow, underpowered, and on track where it should have come into its own it was gutless and ran out of ground clearance too quickly. Step forward to the new bike and I absolutely love it, if you only want to ride for 30-40 miles at a time that is.

Eighty per cent of the time it makes no sense at all. Yet strangely the Hypermotard SP is one of the most exciting and memorable bikes you can buy – as long as you don’t want to go too far or ride it too slowly.

Compared to the standard £9695 Hypermotard 821, the SP new was £2300 more expensive although for that, on top of the uprated suspension, fancy wheels and improved brakes you also got a tri-colour paint scheme in black, red and white, nicely-finished black handlebars and yokes with black span-adjustable brake and clutch levers, carbon-fibre front mudguard, carbon cam belt covers, retuned riding modes, a Marzocchi aluminium yoke and stickier Pirelli Diablo Supercorsa tyres. As a used buy the SP is even better value, generally being available for around £1500 more than the stock version. 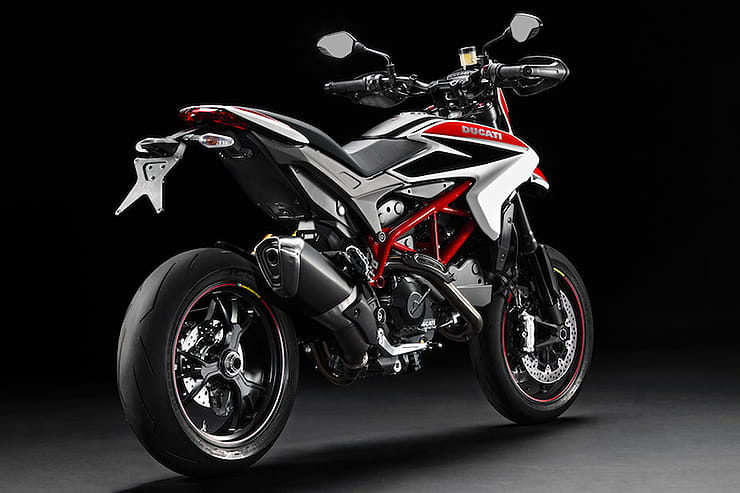 The new engine is a peach, produces 110bhp in both SP and stock guise (which is more than both the old air-cooled 796 and 1100) and honestly makes you question why you would need any more, especially in this guise. Any more and it would be a bit of a handful. It might lack the low-down grunt of the old air-cooled 1078cc unit but there’s still plenty of smooth, predictable power.

It's hugely tractable even at low revs. On the way out of the corner it finds a ridiculous amount of grip from the Pirelli Diablo Super Corsa tyres, sticks the front wheel towards the sky and clears off. Even with Ducati's brilliant traction control and anti-wheelie cutting in on certain engine modes, you have to cover the back brake constantly in the first two gears to keep the front wheel down and stop it looping.

The short-ish gearing means it accelerates hard from 30-80mph, shifting up around 9500rpm before it runs out of power and revs. It’s a hard-charging big bike that will put a smile on anyone’s face, but make no mistake it’s pretty hardcore, just like an SP version should be.

With this all-new Hypermotard, out has gone the old 1100cc air-cooled motor and in has come a brand new liquid-cooled 821cc 8v unit, which is basically a stroked version of the 796 unit. The gearbox is a familiar six-speeder while the old twin underseat exhaust has now been replaced by a single, side-mounted design to both reduce weight and improve handling. 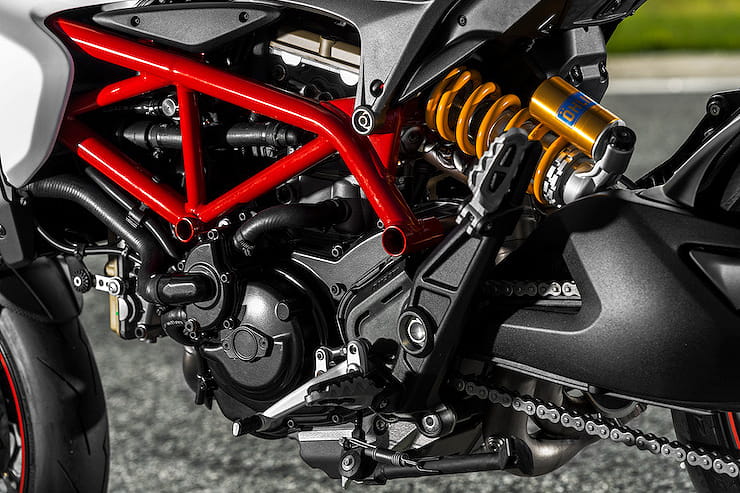 The supermoto-style Hypermotard has never been about economy, especially in SP form but the new 821cc motor, being a middleweight twin, is still reasonably economical. Ridden gently we’d expect mpgs approaching 50 although, particularly in SP trim, this is very unlikely, so nearer 40mpg is more likely.

Both new Hypermotard 821s benefit from a longer swingarm to make them less twitchy over bumps. The SP, however, not only has more sophisticated Marzocchi/Ohlins suspension it’s also longer travel and firmer. The SP, for example, has 175mm of rear wheel travel and 185mm of front wheel travel compared to 150mm rear and 170mm front of the standard bike, which means you’re also perched higher.

The firm set-up means that you have to be riding it fairly quickly to make the forks feel like they’re working and absorbing the bumps. Ride the SP slowly and it’s mostly hard and uncomfortable, the seat is rock hard and it judders and shakes at low speed. But ride it on a back road at full attack like Jean Michel Bayle (look it up kids) and it’s hilarious.
On some bumpy back roads it’s actually a bit firm and kicks the bars around. The fully-adjustable suspension can all be softened off of course. But when it’s dry and the road is smooth the SP gets into a corner so quickly you almost can’t help sticking your foot out supermoto style, getting the thing hustled through, while mid-corner, partly due to those sticky tyres, you can lean it silly far – as far as you dare. 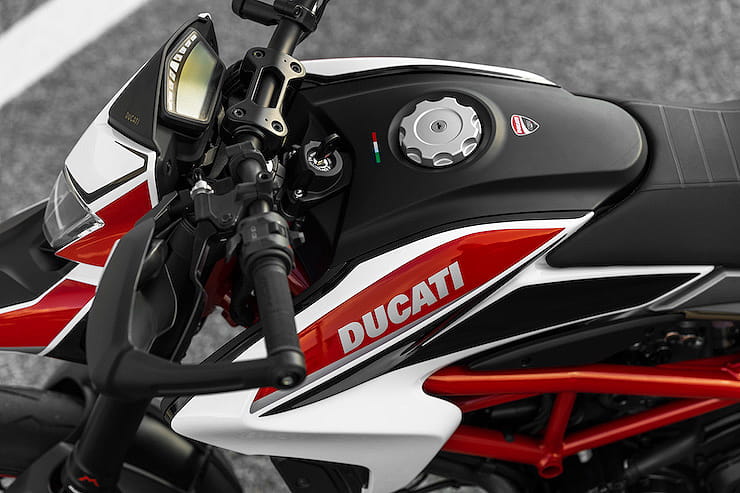 Both new Hypermotard 821s benefit from familiar, big, twin 320mm discs grasped by new, cast aluminium monobloc Brembo calipers – and they’re a big improvement over the old, not that the lightweight Hypermotard ever struggled with braking power. But the SP gets an added braking boost by utilizing a Brembo radial master cylinder, which is a noticeable improvement, making the set-up even sharper. ABS is standard.

Both new Hypermotard 821s benefit from a roomier, less extreme riding position – you’re sat further back and the pegs have also been brought forward. But with an 890mm seat height compared to a much lower 850-870mm standard bike the SP’s tall – so tall that even at 6ft 4 in my socks it’s a stretch to the floor.

As a result, ride the SP on a motorway and you’re sat on top of it with barely any wind protection making it annoying above 80mph. But that high riding position also means you dominate in traffic and its slim body and high bars mean its brilliant in town, slotting through traffic like Marc Marquez on the last lap charge in MotoGP.

Overall, however, it’s generally impractical, although its larger 16-litre fuel tank is an improvement and there are lots of touring accessories available.

The new engine introduced ride-by-wire to the Hypermotard bringing with it a whole new suite of electronic rider aids including three riding modes which are sportier on SP plus eight-stage traction control (DTC).

The SP’s Wet mode delivers 75bhp with low torque, Sport mode is the full 110bhp with medium torque while Race mode is also 110bhp with high torque, a sharpened throttle response, reduced traction control and no rear ABS.) Apart from high spec cycle parts and quality finishes and materials, that’s your lot although an impressive range of extra-cost accessories is also available from Ducati. 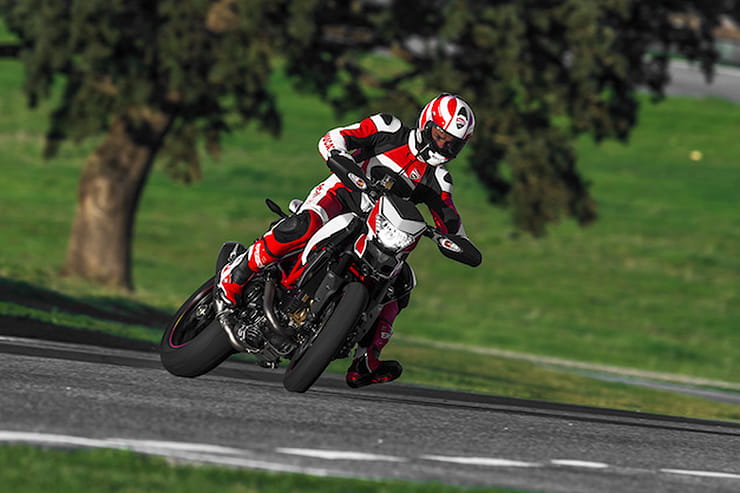 The Hypermotard SP is a brilliant bike that will be too focussed for some, while for others its single-mindedness will make it charming.

As a rich man’s ride-to-work tool, to take out for a back road romp, or something to nip across London on, the SP is an absolute hoot, hilarious even and turns every ride in to a full-on race. If that sounds like you, you’re a rich commuter with a journey of less than 30 miles, have no more luggage than a rucksack and can justify the price tag an SP is what you need.
But there’s also no getting away from the fact that the SP is expensive and impractical most of the time. No matter what age you are, you’ll feel like a hooligan. And while you might get used to this feeling, your neighbours and vehicles you’ve just overtaken probably won’t.  In fact they may wave with an inverted and clenched fist, a reaction purely based on the exhaust note and height of the bike. What they won’t be able to see is the smile under your helmet…

Three things we love about the Hypermotard…