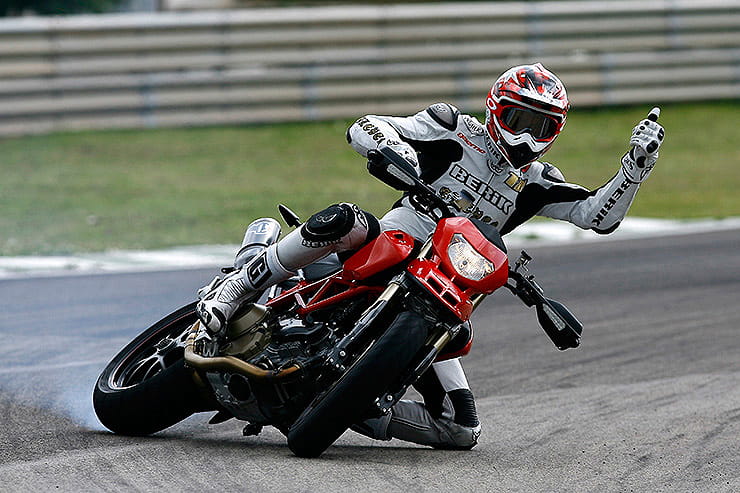 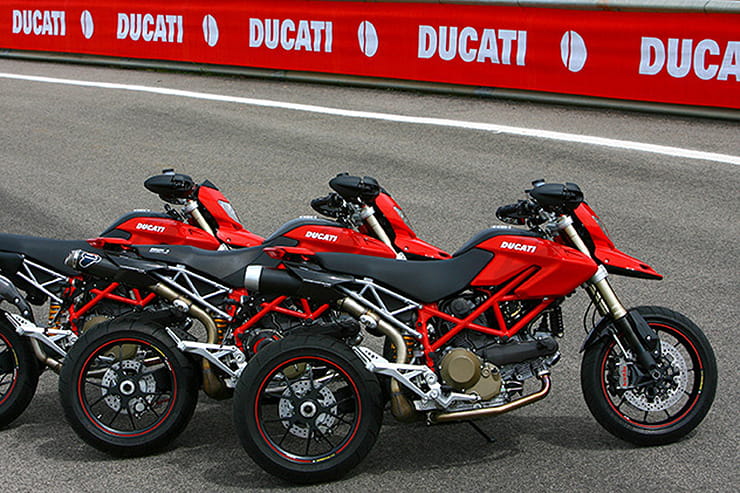 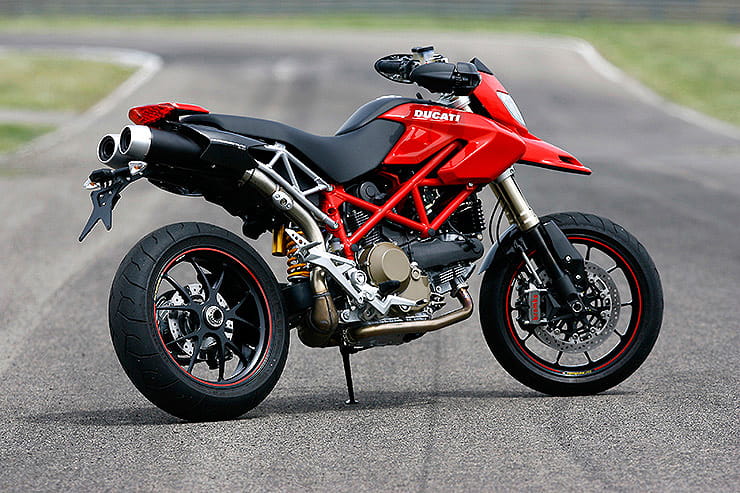 Ducati’s Hypermotard has always been one of those bikes that splits opinions – not only in its styling but also its point in even being in the model range at all! Designed by Pierre Terblanche (yep, him of 999 fame) this bonkers big supermoto is all about having fun and practicality very much takes a back seat, in fact there is about zero nods to practicality at all in a Hypermotard. Launched in 2007, the first generation of Ducati’s wild child was powered by the firm’s wonderful air-cooled 1100 engine and is arguably the best incarnation and certainly has a bit more spark in it than the subsequent liquid-cooled models. Bereft of any fancy electronics, what you see if what you get on with the Hypermotard – mad styling, a stack of air-cooled punch and seriously agile supermoto handling. It is fun with a capital F but also very limited in its use. One for sunny Sunday blasts and most certainly not slogging out a commute.

Considering the Hypermotard is a fairly old bike now you would expect its price tag to be a bit lower than it actually is, which is a disappointment for a used bike buyer who wants a bargain Duke. It’s the old Ducati thing, not only does that name on the tank ensure an inflated price tag, a lot of the bikes have covered minimal mileages and that also keeps the value high. At the lowest end of the price point are stock models with private sellers asking for around the £5000 mark and dealers trying to get £5500. Add an S after the name and you need to fork out another £500, taking your expenditure to in the £6000 region – even more if it has the much-coveted full service history. Expect to pay about £6500 for a good S model with a FSH and you will be on the money. If you want the updated EVO engine models, prices start at £6500 and again, the S ups this by £500 to just over £7000 with the top end £7500 for a 2012 S with a FSH. 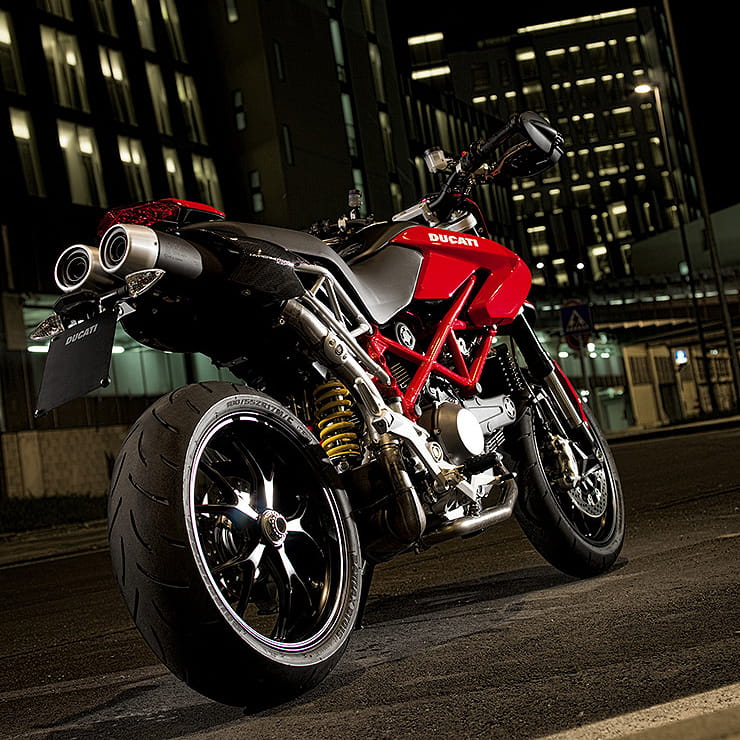 The air-cooled desmo motor may sound old-fashioned due to its cooling method and two-valve design, however it is a brilliant engine that is stacked full of torque thanks to its long-stroke and low revving nature. Topping out at 95bhp means it isn’t that impressive in terms of pub bragging rights but when you ride it the 75.9lb-ft of torque is the star of the show and guarantees an instant punch of acceleration that is surprisingly fierce. If you want to lollop along the twin is very relaxed and easy-going however twist the bit that feeds it fossils and you had better be gripping those bars nice and tight...

The 1100 engine’s roots can be traced way back in Ducati’s history and as such it is thoroughly tried and tested and as long as it is well looked after is generally a reliable motor. The main issues that the 1100 run into are usually visual or at least caused by road dirt and a lack of cleaning so check for flaking paint on the cases and also around the clutch slave cylinder, which hints that it has a leak. You need to do the usual Ducati checks which involve seeing if the cam belts were swapped every two years and also checking the ‘desmo service’ which is a valve clearance check has been completed on schedule at 7500 miles. You get a few faults such as corroded wires to the starter motor but in general it is quite a reliable motor. As there is no difference between the motor on the stock and S models your aren’t missing out in terms of performance if you buy the lower-spec model but the EVO engine (introduced in 2010) while not actually making any more peak power and torque produces its figures at different revs and feels stronger in its mid-range to ride. Be wary of sprag clutch issues (a squeak when the starter is pushed) and any warning lights as sensors can break over time. Ducati sold a Termi exhaust system for the Hypermotard, which is pretty cool and does unleash a lovely extra bit of V-twin sound. 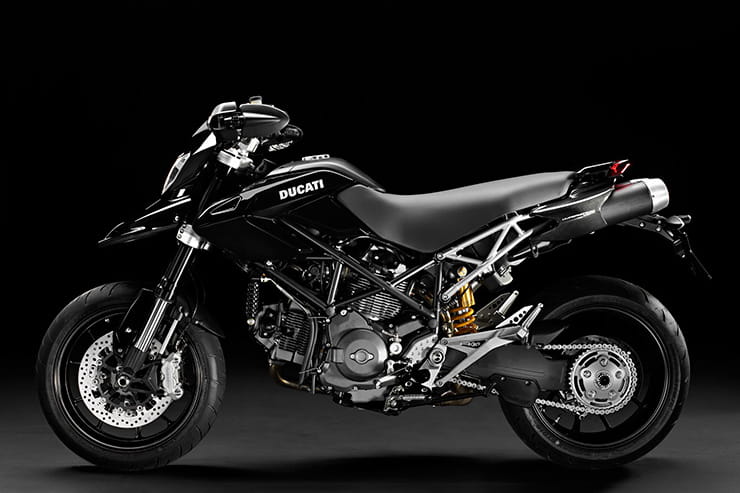 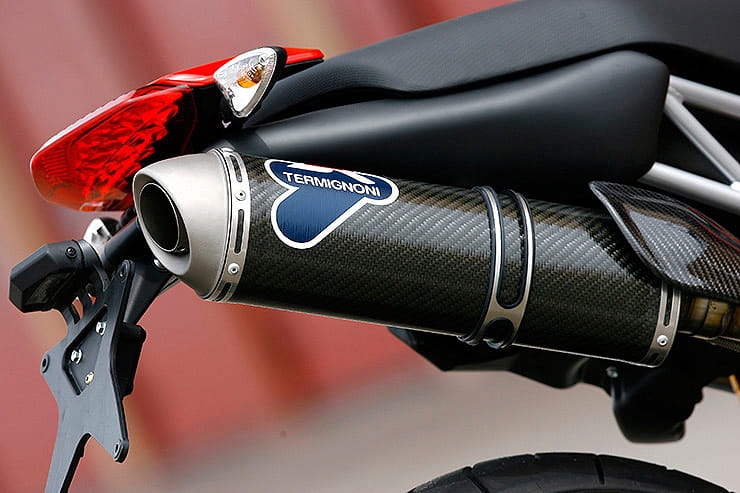 The air-cooled motor is ok in terms of fuel economy and gentle riding can see it record low 40s mpg figures. However you have to remember this is a Hypermotard and that means the riding is often not that gentle and so 38mpg is more realistic and a tank range of in the 120 miles region from its fairly small 11.5-litre tank. Or a bit more on the EVO models as they have 12.4-litre tanks.

The Hypermotard may look odd but it can most certainly hustle down a B-road and is also equally happy to take to track, as Ruben Xaus demonstrated in a very famous series of sideways pictures! Thanks to its 17-inch wheels you can throw some sticky rubber in it and then aside from a lot of fork dive and a bit of a lack of ground clearance when you really start to up the pace there is loads of fun to be had. The S model with its uprated suspension, brakes and lightweight Marchesini wheels is the sportier of the two models but don’t underestimate the base bike’s potential for being a hooligan. A tall 845mm seat height can make them feel a bit tall but once on the go this is quickly overlooked as you will be grinning from ear to ear the whole time. As on any single sided swingarm bike, watch out for seized eccentric hubs. 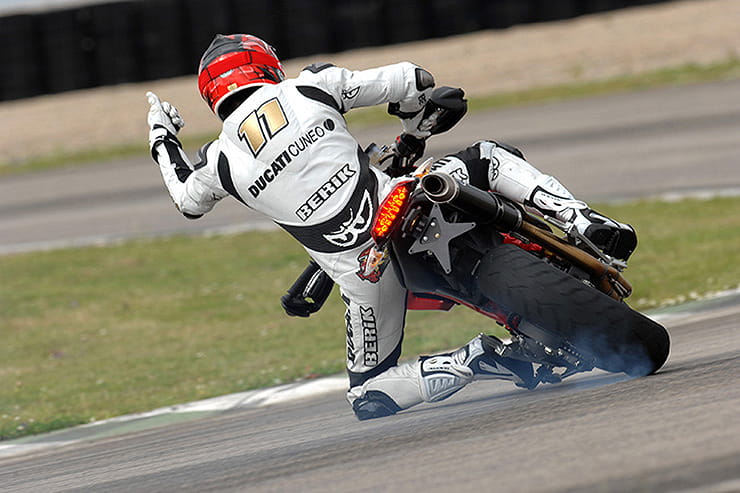 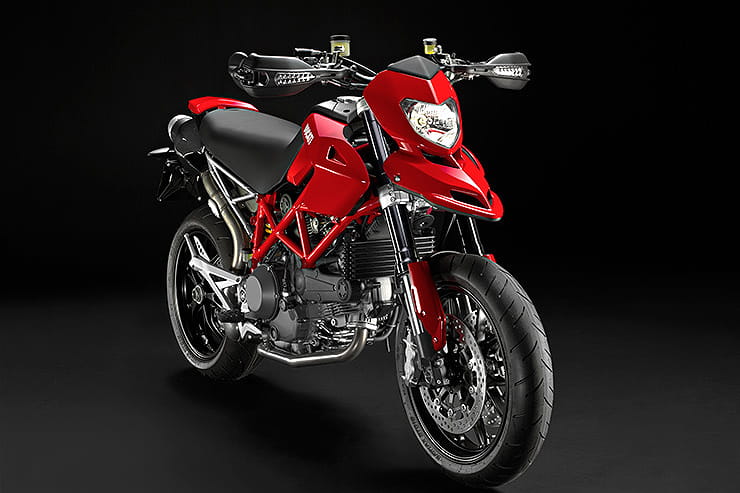 Both Hypermotard models boast a Brembo set-up with radial four-piston calipers however the S’s calipers are monobloc where the base bike’s aren’t. In truth you are highly unlikely to be able to spot the difference in performance and on a used bike a fresh set of high-friction pads will even the playing field.

The Hypermotard has absolutely no concessions for comfort and while the supermoto upright seating position is quite relaxed, the seat is rock hard and if you take a pillion prepare for them to get a train home from your destination rather than face the return leg. As the Ducati lacks much in the way of a screen (you can add an aftermarket one) all the wind hits your body as it sits upright like a sail and that means your arms and neck will ache from the effort of holding on. Yeah touring isn’t a strong point, although at least your hands are kept warm and sheltered behind the brush guards...

In terms of rider assists you get zero aside from Ducati’s datalogging system, DDA, on the EVO bikes. ABS and traction control were never an option. In terms of accessories most riders go down the aftermarket exhaust route with the twin underseat pipes replaced by a single high-mounted silencer. You get the occasional owner who swaps the levers for performance items or adds a screen or uprated clutch slave cylinder but most Hypers remain pretty stock aside from cosmetic trinkets. 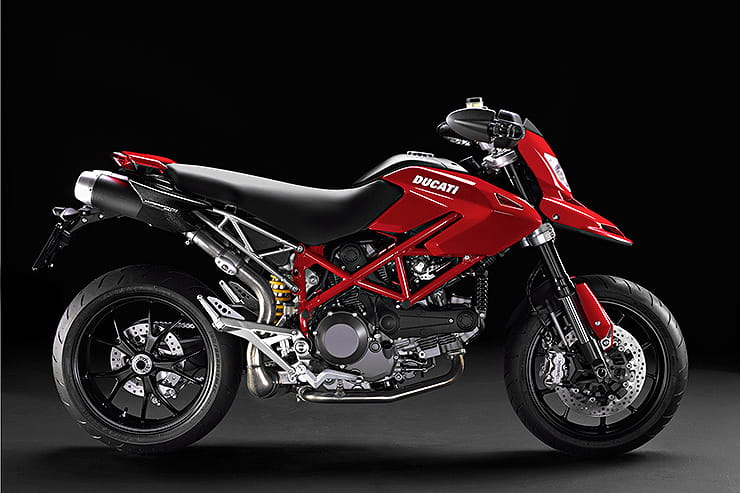 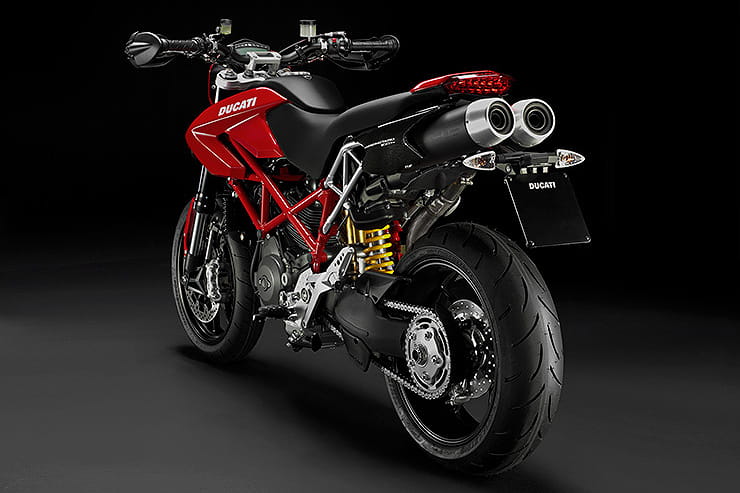 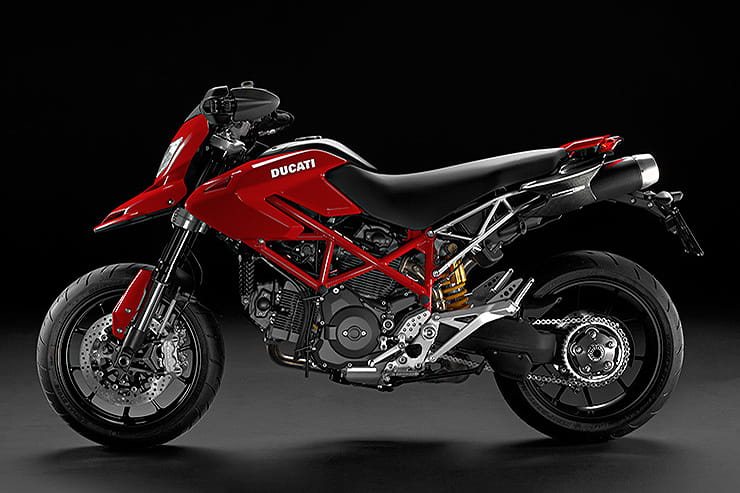 The Hypermotard 1100 is a full-on and fairly focused machine that won’t appeal to all riders. It is quite uncomfortable, aggressive and is best enjoyed on sunny weekend rides rather than relied upon as a form of two-wheeled daily transport. That said, they are tremendous fun to ride and if you want a big-bore supermoto, few machines offer as many grins per mile.

Three things we love about the Hypermotard…