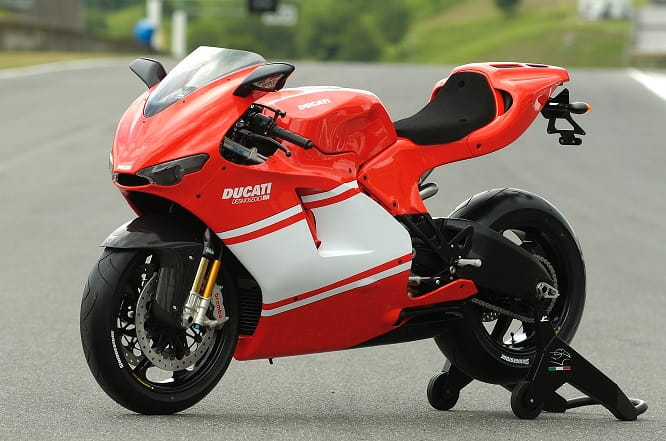 With Honda releasing its road going RCV, it’s time to look back at the first proper MotoGP replica – the awesome Ducati Desmosedici. Not only did this bike set the standard for race reps, it has also had an interesting history when it comes to value and is £100,000 cheaper than the Honda! If you want MotoGP rep, this is the most affordable bike on the market…If you can call £40,000 affordable…

After being announced in 2004, the RR broke cover in 2006 at the World Ducati Weekend to an expectant (and mainly dressed in red) crowd. There was only one question on everyone’s lips – would Ducati really make a proper road going MotoGP bike? The answer was a resounding yes!

The Desmo didn’t only share its DNA with the firm’s MotoGP bike, it was basically identical! Based around the GP6 MotoGP bike that Loris Capirossi and Sete Gibernau competed on in the final year of the 990cc beasts before MotoGP dropped to 800cc, the only real road concessions in the RR’s engine had were to ensure reliability. The 989cc V4 engine had the same 82mm bore and 42.56mm stroke as the GP bike, not to mention the twin-pulse firing order and desmo drive system with gear driven cams. Inside the sand-cast cases and cylinders were more titanium parts than you could shake a stick at and it was all finished with magnesium engine covers and sump. The net result was a ferocious 200bhp, which in 2006 was amazing, and it all exited via an underseat exhaust that had F1 technology to stop it melting the seat unit! And the chassis was equally as exclusive. 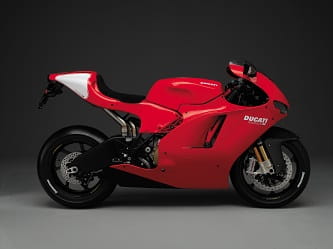 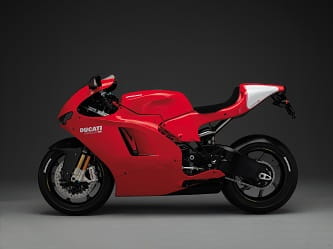 The tubular steel hybrid chassis (no monocoque, that disaster happened later in the GP bike’s history) incorporated the engine as a stressed member and had a self-supporting carbon subframe and massive swingarm. Add to this lightweight wheels (the rear was a 16-inch item), a carbon fairing and the first gas-pressurised forks on a production bike (Ohlins, naturally) and it all adds up to one hell of a trick bike. And at only £40,000 it was decent value, which is where the Desmo’s issues started.

Ducati sold every Desmo they could make and when it comes to exclusive bikes that can be an issue. Technically only 1500 Desmos were ever made, but it seemed like quite a few more were out there and as a result prices started to dip. Collectors thought they were onto a good thing with the Desmo, but after the initial hype calmed down, and the GP team stopped winning, prices tumbled and you could pick up a used one for under £30,000. Some were even advertised or £25,000 when the financial crisis hit. Which is when canny buyers snapped them up…

Nowadays, helped by the RCV but also Ducati’s resurgence, the Desmo’s value has gone up again and dealers are trying to get top whack for them. A brand new, zero mileage, bike is currently advertised for £64,000 while used ones are nearer £50,000. Are they worth it? To be 100% honest, with its traction control and exclusivity the 1098R is actually a more significant limited edition Ducati, but you can’t help but love the Desmo…

www.ducaticoventry.com - The last time we looked in his workshop there were about 15 Desmos there!

www.ducatisportingclub.com  - A UK-based Ducati forum full of Ducati enthusiasts who ride rather than polish their bikes.

Is it a worthwhile investment?  or