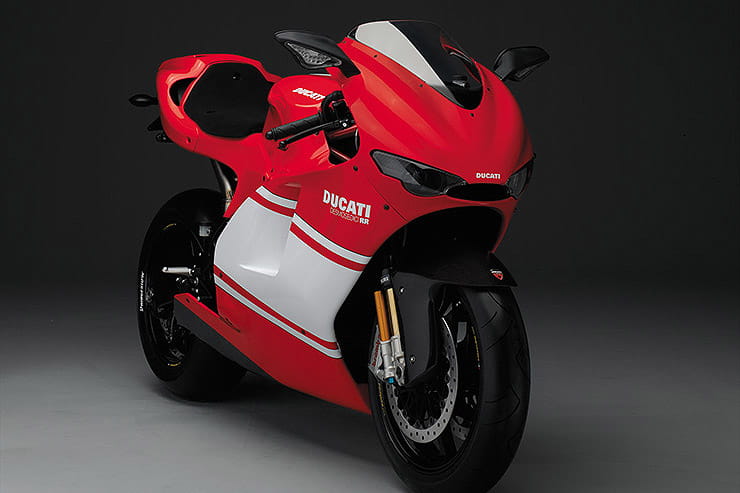 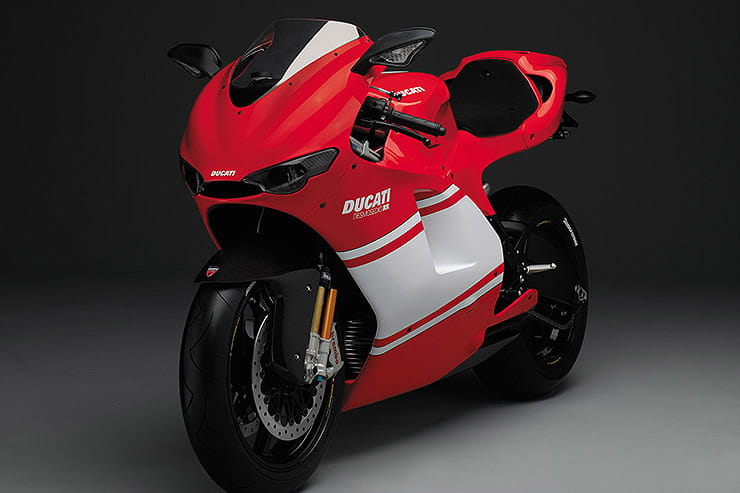 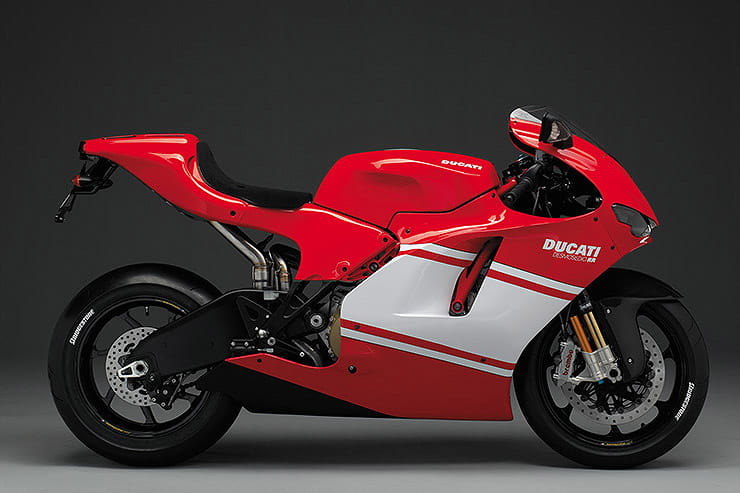 How often do you get the chance to own a genuine MotoGP replica for the road? The answer is simple – you have two chances. The first one involves shelling out over £150,000 for Honda's RC213V-S and the other is buying the bike that broke the mould and was the first MotoGP bike with lights – the glorious Ducati Desmosedici RR. And the good news is that you can get one for around £100,000 less than the Honda – although it isn’t quite as exclusive…

Remarkably, when the Desmo was released in 2007 it cost ‘just’ £40,000, which isn’t bad for a full-on limited-edition MotoGP rep at all when you consider the firm’s range-topping 1098R was only a shade under £25,000. There again, it also demonstrates just how badly Ducati were cheating (rule-bending…) in WSB at the time as the homologation special was pretty bloody special and basically a hand-built model like the Desmo. Nowadays the Desmo is well and truly in the ‘future classic’ park and that means a hefty price tag. Far from rare as Ducati actually made over 1500 Desmos, you still need to look at spending in the region of £50,000 for a used example and just under £60,000 for one with minimal miles. Some extras also boost the price tag, especially the GP7 exhaust pack…

A claimed 200bhp with 85.6lb-ft of torque puts the Desmo in the same ballpark as the current Panigale V4, however while the RR has the same off-beat sound as the Panigale due to its ‘twin-pulse’ firing order, its engine isn’t quite the same in character and feel. Due to Ducati’s extensive use of exotic materials within it, the RR’s V4 is a touch faster to rev than the Panigale’s V4, meaning that while it still feels lazy in a typical V4 way it isn’t quite as relaxed or gutsy as the bigger-capacity Panigale. Far from slow and with a real zip of top-end acceleration, the Desmo has a lovely predictable throttle response and a sound that is quite simply incredible – especially with an open pipe fitted! 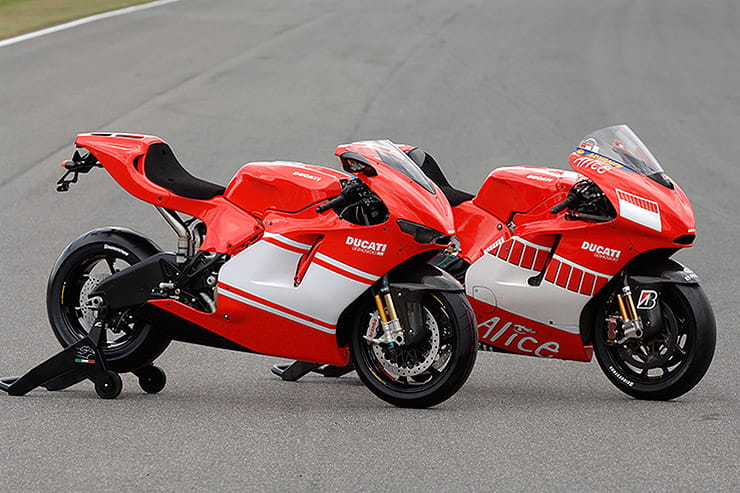 The Desmo’s engine is a work of MotoGP art and has some incredible technology within. As well as carrying the same bore and stroke as the GP6 MotoGP bike (and 989cc capacity), the Desmo has the same twin-pulse firing order and even comes with titanium valves and gear driven cams with the desmodromic timing system. The six-speed gearbox is a cassette style and there are sand-cast engine cases, titanium con rods and much, much more. But there is a cost to all this tech and that is servicing…

The Desmo needs a service every 12 months, which isn’t too bad as it is essentially oil and filters, but every 7500 miles the  valve clearances need inspecting – and this is an issue. The problem is that to gain access to the hideously compact V4 you need to basically pull the whole bike apart so that all you are left with is a motor with a swingarm attached to it. That’s about 10 hours of workshop time if you are lucky and a bill of around £1500. The good news is that there are no cam belts to check… At 22,000 miles the news gets even worse as at this mileage the heads need to come off and the valves de-coked, which will relieve your wallet of about £3000 – mainly as each head gasket (remember there are two) costs approaching £500! And that’s provided the titanium valves are ok and nothing in the motor needs replacing. Speaking of replacing, the idler gears are known to crack on a Desmo, which should get picked up during a service if the guys doing the work really know their Desmos.

In 2007 Ducati sold a ‘special race kit’ that included a 102bD race exhaust, dedicated CPU, bike cover and a paddock stand. The kit cost in the region of £5000 at the time but is very tricky (and expensive) to locate nowadays unless it comes with a bike.

You don’t buy a £50,000 bike and worry about fuel economy. If you own a Desmo, you should be far more concerned about the cost of insurance, availability of 16-inch rear tyres and when the major service is due than what its mpg figures are! 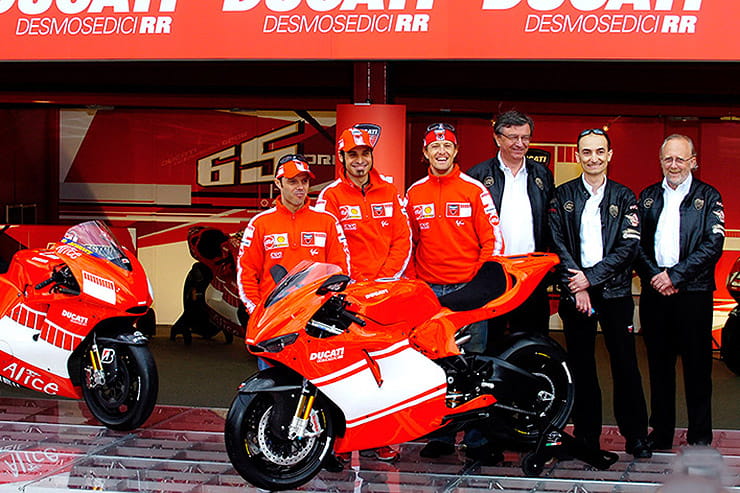 The Desmo has the same style of chassis as the GP6 MotoGP bike and that means a tubular steel trellis as that’s what Ducati were running at the time in GPs. Impressively, it also has the same geometry as the GP bike as well as a self-supporting carbon subframe and even Marchesini forged and machined magnesium wheels, a first for a production bike. Add to this Öhlins FG353 pressurised forks (another first) and an Öhlins shock and it is fair to say Ducati didn’t cut any corners. However there are a few oddities and while the front wheel carries a normal 120/70 17-inch tyre, the rear is a 200/55 16-inch item that runs specially designed Bridgestone BT-01R tyres that cost around £300 each and is a reason why a lot of bikes have 17-inch rears fitted. Not that many Desmos cover enough mileage to use up a rear tyre… On the go the Desmo is agile but not staggeringly agile in a typical Ducati fashion and it is only really when you are on track giving it the full Monty that the GP-derived chassis is apparent. In truth on the road the suspension is harsh, the brakes super sharp and the seating position both hot and uncomfortable. But who cares? This is a GP bike with lights, it’s meant to be a bit aggressive! When buying used, check the forks are still pressurised and not weeping any oil past the seals as they should be serviced every few years and don’t like to be stood still.

Apparently the same set-up as the GP6 used in wet conditions, the Desmo’s Brembo four-piston monobloc calipers have more than bite and are on a par with the very latest Brembo Stylema calipers for road riders.

MotoGP races only last 45 minutes and cover roughly 80 miles and that’s also about all your bum will be able to withstand on the Desmo! The underseat pipe is hot, the motor is hot and the riding position is designed for someone the size of Loris Capirossi! Luckily the tank only holds 15-litres of fuel… 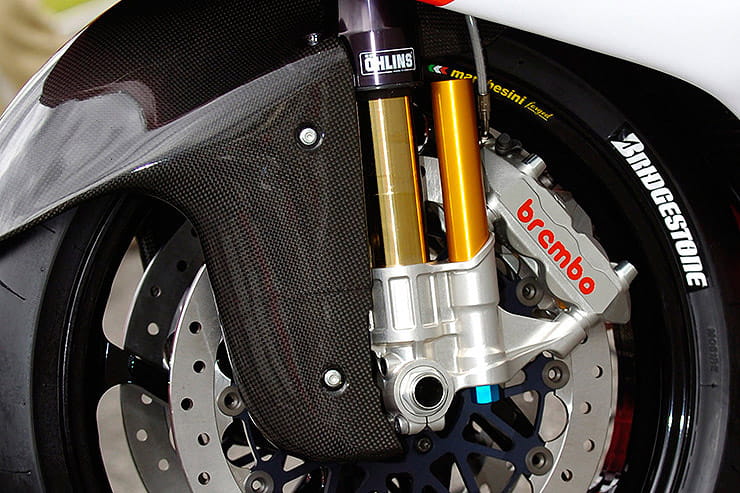 In terms of rider assists, you get a shift light and that’s about it. Sorry, however if it is any consolation the dash is identical to that used on Ducati’s GP7 MotoGP bikes. The 1098R, which came out a year later, introduced the world to sportsbike traction control and the Desmo is lacking anything other than your right wrist’s control. In terms of accessories, there are a few on the market and owners update the 16-inch rear wheel for a 17-inch item to increase the tyre choice, which is a good move, and then there is the exhaust system… In 2007, Ducati sold a GP7 exhaust pack that cost £5000 and contained a titanium exhaust, new carbon belly pan, new carbon seat unit, race ECU and air filter – making it seem fairly reasonable. Unsurprisingly, Ducati sold out and it is no longer available. If you want your Desmo to bark like thunder, you need to buy one with a GP7 exhaust system already fitted as they are as rare as rocking horse poo second hand and prices reflect this. There are two paint options – Rosso GP (red) or the ‘Team Version’ which has white stripes on its fairing and came with a sponsor decal kt.

In a cold light of day comparison to the new Panigale Superleggera, V4 R or even the V4 S, the Desmosedici is expensive, not as powerful and lacking in the electronics stakes. However the march of time and technology will always make an older bike appear out of date and owning a Desmo is about far more than just what its specs say. This is a MotoGP bike with lights and (relative…) exclusivity, which makes it an incredibly special machine. Worth upwards of £50,000? If you have the spare cash to consider buying one, that’s not really a question you will be asking yourself…

Three things we love about the Desmo… 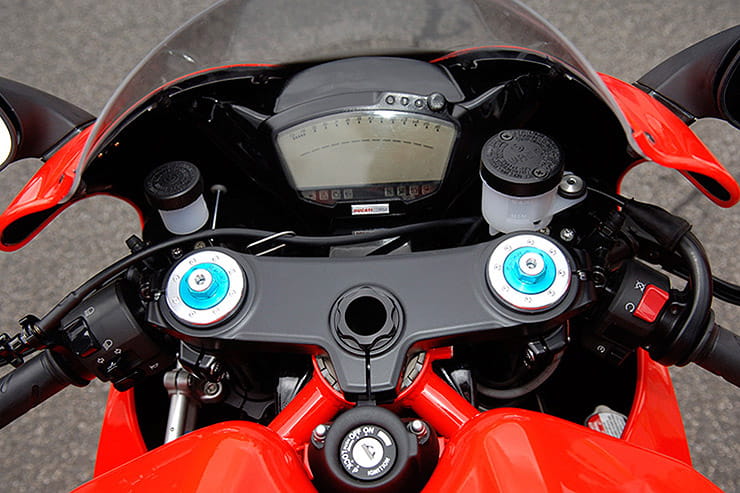 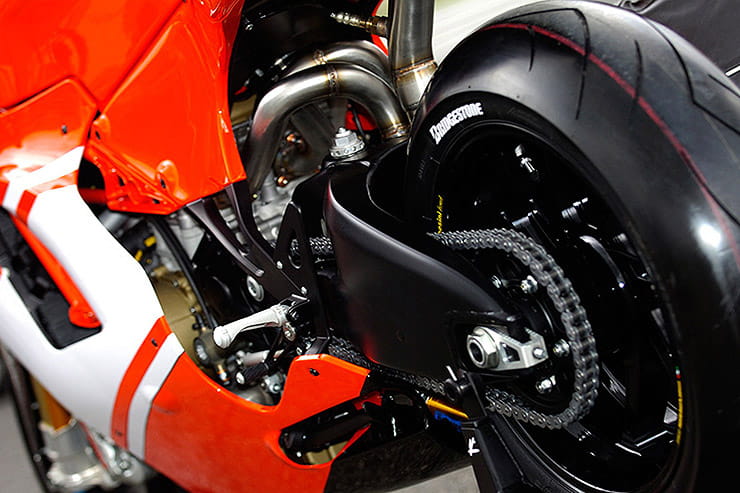 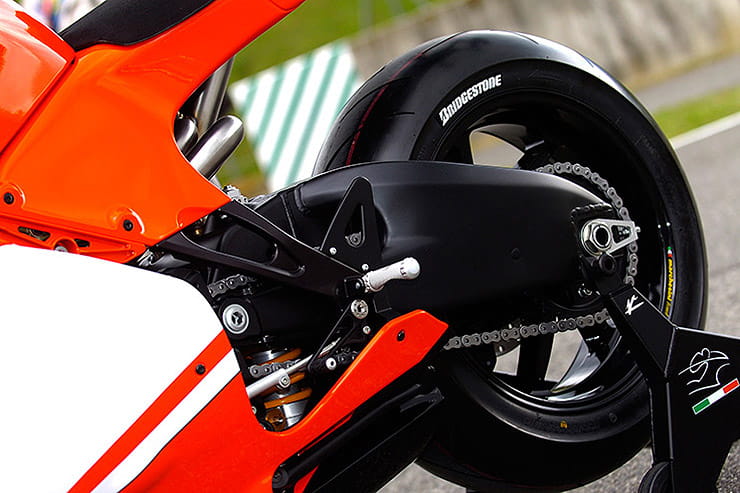