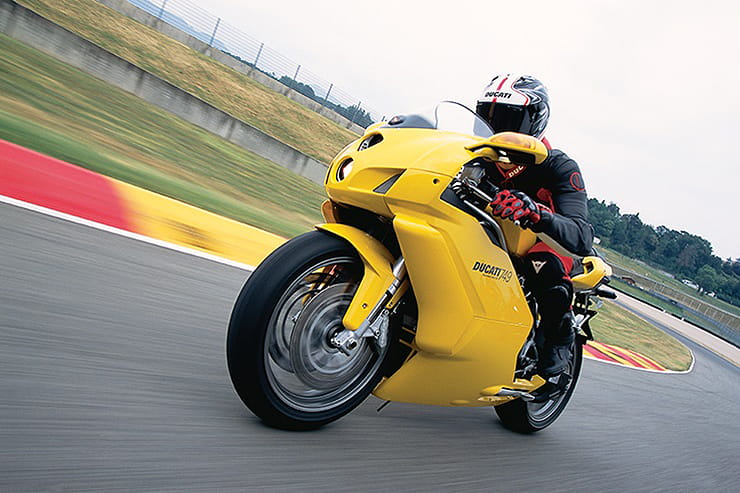 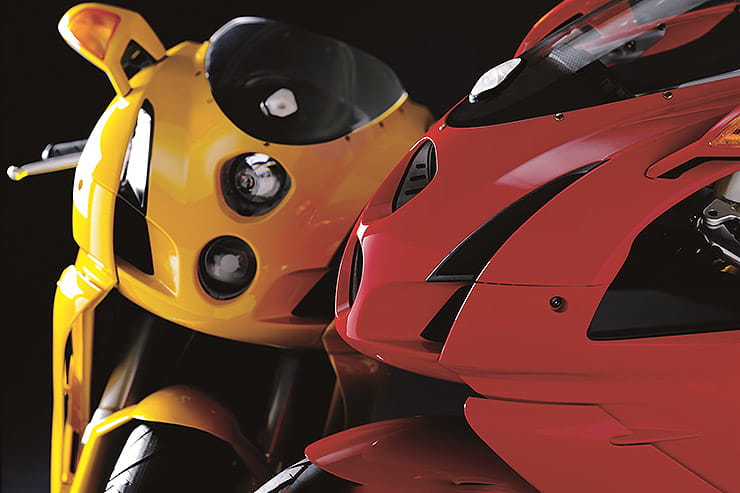 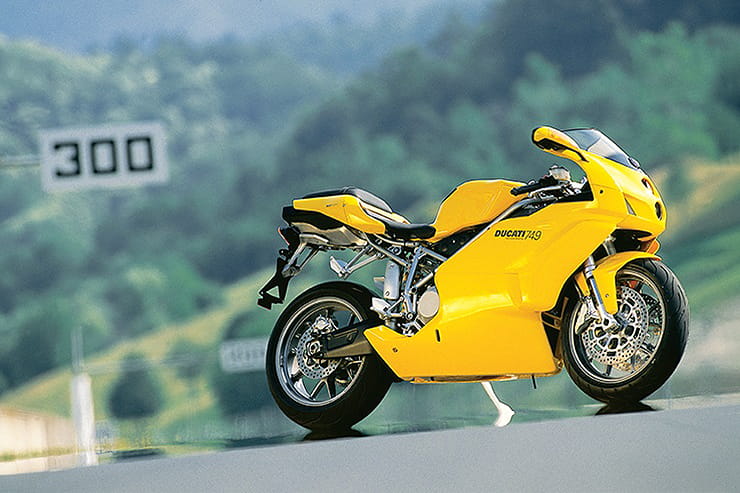 Many overlook Ducati’s middleweight superbike and instead are drawn to the bigger capacity ‘headline’ 999 model, which seems a real shame as the 749 is everything the 999 is – just a bit smaller in capacity. Which has been both a blessing and a curse since its launch in 2003. Initially sullied with the same brush as the visually-challenging 999, the 749 actually outsold its bigger sibling in the UK (by 80 units) due to the fact it carried a far more accessible price tag, opening ownership up to a wider audience. If you want a unique-looking Ducati sportsbike that has (so far...) just about managed to avoid the old ‘future classic’ price hike, the Ducati 749 is well worth considering. Especially the second generation S model...

Like the 999, the days of rock-bottom price tags on any Pierre Terblanche-designed superbike are long gone, however the 749 remains the right side of affordable where the 999’s value has been over-inflated. Prices for the base 749 model start at around £4000 in a private sale with dealers pushing this up to £4500, which is roughly what an early 749S will cost in a private sale with dealers asking just over £5000 for a similar machine. If you want the updated 2005 bike you will need to give just over £5000 in a private sale or £5500 from a dealer for a base model with this increasing by about £750 for the more desirable S version. Age, mileage and service history all make a big difference to any used Ducati’s price tag, so there are very much just guideline prices.

The 749’s desmo V-twin, even in base 749 guise, makes the same kind of power figures that the original 916 claimed, so it is far from a slow engine and certainly not one to be dismissed. Due to its smaller capacity it lacks the thumping mid-range hit you get on the 999 but it still has plenty of drive and once you get over the stutter at low revs (it’s a big capacity V-twin, they all do that but is less pronounced than on the 999...) and into the meat of the mid-range it is a lovely engine to ride. Some claim the 749 is revvier than the 999, which is down to the fact it isn’t as powerful and therefore you need to work it a bit harder to achieve the same speeds, but it is far from rev-happy and is still a lazy and deceptively fast desmo V-twin with a glorious soundtrack. The S version in both generations makes noticeably more power and torque, however for road use the base 749’s engine is far from lacking and most riders will be more than happy with its performance. 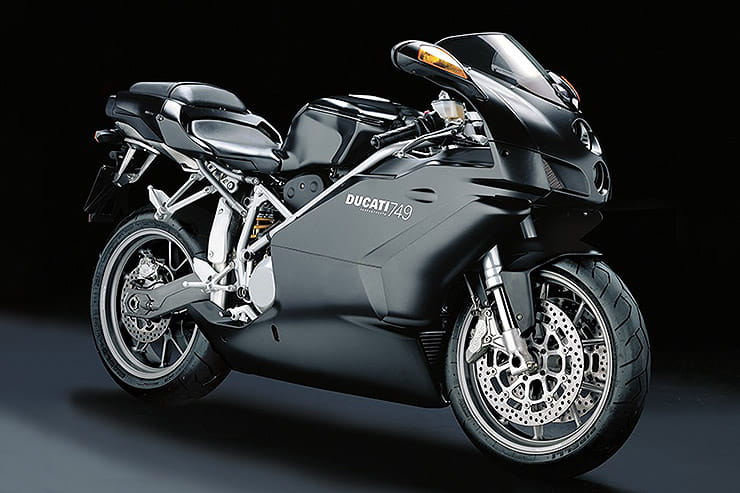 Here is where it can get quite confusing with the 749 as there is a variation in the power output between both models and years, so you need to know what you are buying. The first generation of 749 makes a claimed 103bhp with 56.8lb.ft of torque where the S of the same generation makes a more powerful 110bhp with 58.1lb.ft of torque. In the 2005 update the S model gained a power boost through larger valves, taking it to 116bhp with 60.8lb-ft of torque, and the base 749’s engine was also upgraded to an improved 108bhp with 59.3lb-ft of torque. The easiest way to check is to look at the fairing, the lower power models have twin scoops on either side of the front fairing, the updated bikes have single scoops. All Dark models are based on the lower spec 749 motor but there was biposto and monoposto versions of both the S and base model. The 749R is a totally different kettle of fish with a unique homologation special engine... As with all Ducati models service history is key and the 749 needs belts every two years (or 12,000 miles) and a valve check every 6000 miles, so look at the service history to ensure this has been adhered to as owners of the cheaper 749 models often don’t stick to it quite as strictly as those who have a 999 in their garage. In terms of mechanical issues, the 749 motor is solid however the relays (fuel pump and headlight) let the side down and the wiring harness behind the battery box corrodes very badly. Change the relays at every service and you should avoid most electrical gremlins and also watch out for corroded coils. If the bike feels a little lethargic, assume rust from the inside of the tank (another common issue) has clogged up the fuel filter and it needs cleaning/replacing. Ducati (naturally) sold an aftermarket Termi exhaust system which does add a lovely extra bit of mid-range however it is far from cheap so if you can find a bike with it fitted, snap it up (just check the chip/ECU and air filter has been upgraded to match).

The 749 isn’t really a bike whose economy figures are worried about by owners. Expect to get just over 30mpg on a gentle ride and fill it up when the fuel warning light comes on. To be honest, it is so uncomfortable you will be delighted to see it illuminated anyway and paying for fuel will be the least of your concerns... 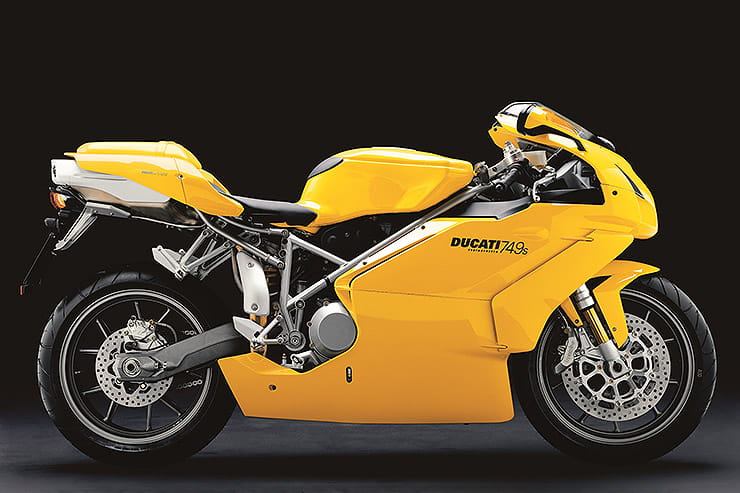 The 749 has basically the same chassis as the 999 (it has a smaller sized rear tyre) and that means you get a lovely mid-corner feel and a slightly slow rate of turn-in. The 749 is actually a touch more agile than the 999 but there isn’t much in it. On the road this translates to a delightfully relaxed ride through fast sweeping bends and on track it is sublime. The base model’s Showa forks may lack the S’s TiN coating however they are fully adjustable and so is its ‘lower-spec’ Sachs shock (the S has a Showa unit). Truth be told, by now the S model’s upgraded suspension will be fairly tired and a re-fresh to the base model’s suspension will even the playing field considerably. And unlike some S models, the 749S lacks lightweight Marchesini wheels. Shorter riders will appreciate the 749’s low seat height and there is even adjustability built into the chassis (the pegs can be altered in their height) to make the bike more suiting to individual rider’s sizes. That said, it is still devilishly uncomfortable...

Brembo brakes, braided lines and no ABS – the 749 and 749S are identical in their braking set-up and have exactly what you would expect on an early 2000s Ducati sportsbike. A good set-up, a refresh and new pads should be all they need to deliver all the bite you could ever wish for.

Umm... No! The 749 is a full-on Ducati sportsbike and as such comes with a cramped riding position and the V-twin can get hot in summer, making slow riding through traffic quite literally a pain. There may be adjustability in the chassis but you are fine-tuning the discomfort rather than making a substantial transformation to comfort levels. The Biposto versions do add a pillion seat, but it is only for the brave/small!

The 749 has a CAN-bus system but lacks any rider aids, so you are totally analogue. In terms of accessories many riders add a race exhaust and a taller screen alongside a few bits of bling such as billet reservoir covers or rearsets but that’s about it. Be wary of any ‘tuned’ bikes and also of any with aftermarket paint schemes. Some have been done legitimately and not after a crash but in a few years’ time will a race rep of a long-defunct team really be considered cool?

The 749 is a great entry point into the world of Ducati sportsbikes. It looks, sounds, and feels like the firm’s headline act but is cheaper to buy and insure, if not run... If you have a hankering for a Bologna-built V-twin the 749 is more reliable than the 748 and with over 100bhp on tap has more than enough power for road use. Ideally aim for the S model but the base 749 isn’t to be overlooked and is cheaper to buy.

Three things we love about the 749/S… 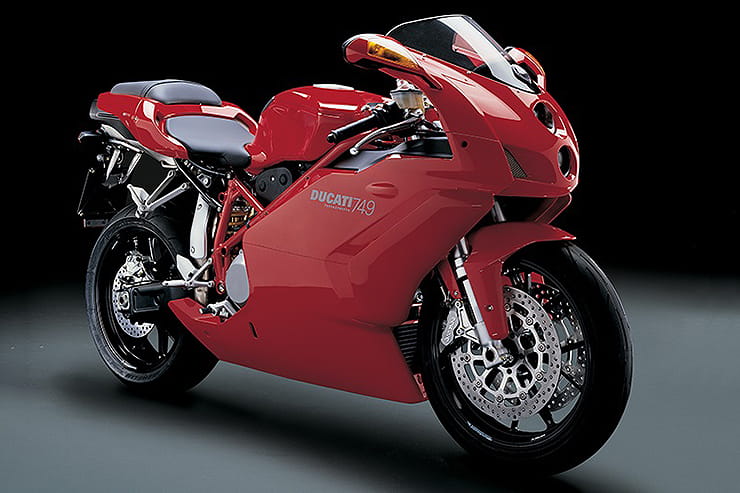