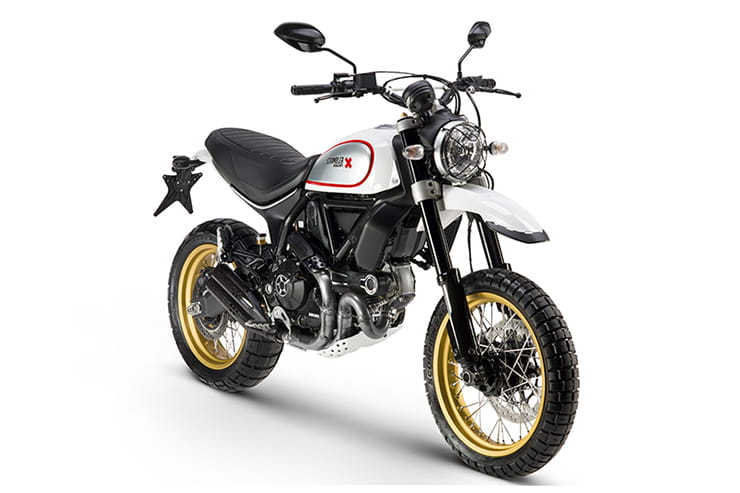 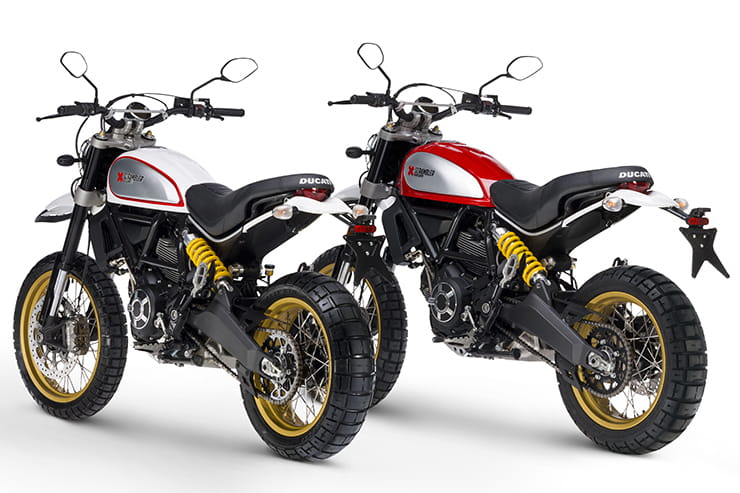 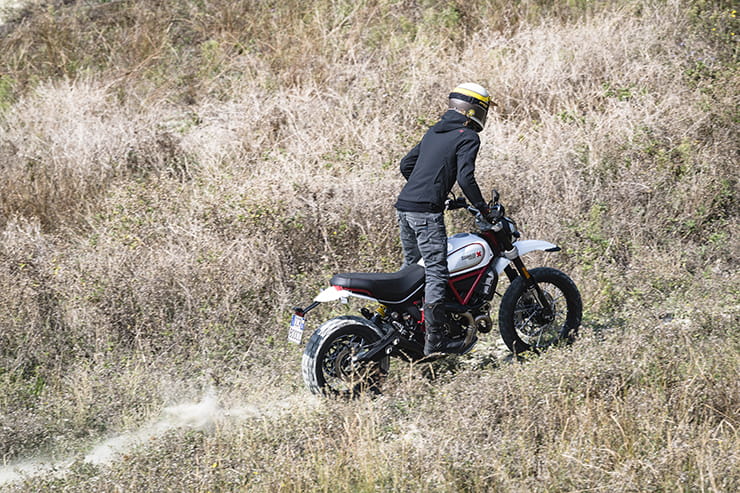 Despite being called a Scrambler, the truth of the matter is that Ducati’s retro model is more off-road focused in its looks rather than its abilities. A rough gravel path or sandy beach access lane can be conquered, but that’s about its limit. In 2017, two years after the Scrambler first arrived on the scene, this all changed with the introduction of the Desert Sled model. Inspired by the bikes that those cool kids in California used to explore the local desert and mountains on in the 1960s and 1970s, Ducati’s offering was far more than just a tarted-up Scrambler. Featuring a beefier frame and swingarm to allow it to deal with the rough stuff, upgraded longer-travel suspension, spoke wheels and a taller seat height, the Desert Sled both looked and acted like it meant business. A very cool take on the Scrambler theme, the Desert Sled is a bit pricier than the basic Scrambler models but feels a more premium and grown-up machine. And if you want to take it green lane riding (sadly we lack any deserts in the UK...), it will happily oblige.

Powered by exactly the same air-cooled 803cc V-twin as the rest of the Scrambler range, the Desert Sled isn’t a machine dominated by its performance figures. Stacked full of character, the air-cooled V-twin has more than enough grunt to be enjoyable and is seldom left lacking simply as this isn’t the kind of bike you want to go charging around on, especially if you are doing a bit of off-road riding. A friendly and responsive motor with a wide spread of torque and good fuel-injection system, it has an overall feeling of balance and makes for a lovely urban machine that is also bags of fun when out and about on B-roads or even off the beaten track. Not only that, it looks and sounds cool, which is important on a bike such as the Desert Sled, and can be made A2-legal if required. Interestingly, the Euro4-compliant Sled has a slightly softer throttle control and engine calibration when compared to the original Scrambler Icon model – not that you would necessarily notice it

As with all of the air-cooled models, the 803cc motor is pretty basic in its design and only has a single overhead cam and two valves per cylinder, which helps keep the servicing costs down. That’s the good news, the bad news is that the Sled requires servicing every 7500 miles and each time the valve clearances require checking. You need to factor in about £300 for this service with the 15,000-mile service upping this to closer to £600 due to the fact the cam belts will need swapping. When buying used, always check the bike’s service history as the belts are also a time-sensitive part and after five years require changing, irrespective of mileage covered. There are few horror stories when it comes to the Scrambler’s engine or gearbox, mainly as it is such a tried and tested unit, so you can buy with confidence as with so many out there major issues would be highlighted by the various forums. Just be cautious on the fuel tank, it is known to rust on the inside (modern fuel...), which can lead to a clogged fuel filter and a lack of performance. Over time it could leak fuel, but this is probably a way off. The exhaust system is fairly robust on the Sled, although a lot of owners swap the OE can for an aftermarket unit, mainly as an aural and styling upgrade (the high level Termi looks awesome) rather than a performance one. When buying used, always look at the section of exhaust that runs under the motor as this is an area that can pick up dings if the bike has been ridden off road. It’s unlikely many Sleds will be taken away from tarmac but it is better to be safe. 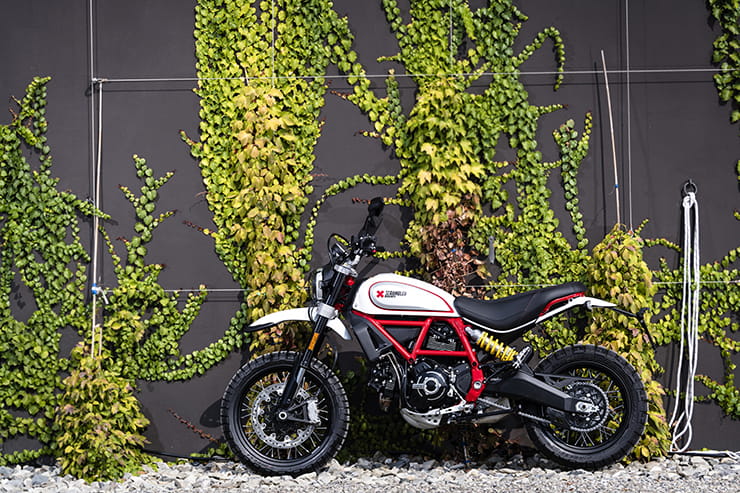 The Sled is fairly economical, mainly as riders tend not to thrash the motor too much. Where a Monster averages low 40s mpg figures, the Sled rider will be closer to 50mpg, possibly even over. Expect to get just shy of 150 miles from the 13.5-litre tank and a fuel warning light (there is a fuel gauge) at about 130 miles and you won’t be disappointed.

The Desert Sled may have upgraded suspension when compared to the more basic Scrambler models but this doesn’t actually play into its hand on the road. In order to give the Sled some serious off-road ability, the KYB suspension has 50mm extra travel at 200mm over the Scramblers, and it is also set a lot softer. When you up the pace this makes the Sled pitch back and forth quite a lot, leading to a slight feeling of insecurity. If you are just a road rider, it is worth stiffening up the forks (they are fully-adjustable) as well as the shock (it has rebound and spring preload adjustment) to reduce this wallowing sensation. The Sled also has a 19-inch front wheel with a 17-inch rear where the rest of the Scrambler range have 18-inch fronts. To be fair the Pirelli Scorpion Rally STR tyres the Sled runs doesn’t make it feel like it has lost any front end feel when compared to the Scramblers and if it does bother you, there are a lot of more road-targeted rubber options out there. If you are a shorter rider, it is best to try the Sled out for size before you buy as its 860mm seat height (there is an 840mm low seat option) is noticeably more than the 790mm on the Scrambler. If you are into off-road riding, you will be pleased to hear that the trellis frame has extra bracing plates around the swingarm pivot point as well as a stronger swingarm. If you only ride on the road, you won’t care...

Yes, you get a radially-mounted four-piston caliper with braided lines as standard, which is good, but there is only one of them! If you aren’t too fussed about roaring around the countryside the single disc set-up is acceptable, and the ABS system good, but a bit more oomph wouldn’t go amiss. In 2019 Ducati added angle-sensitivity to the ABS, which is a great safety assist. If you want a bit more bite, change the OE pads for higher-friction aftermarket items. Like the other Scrambler models, the Sled can have its ABS turned off for off-road use. 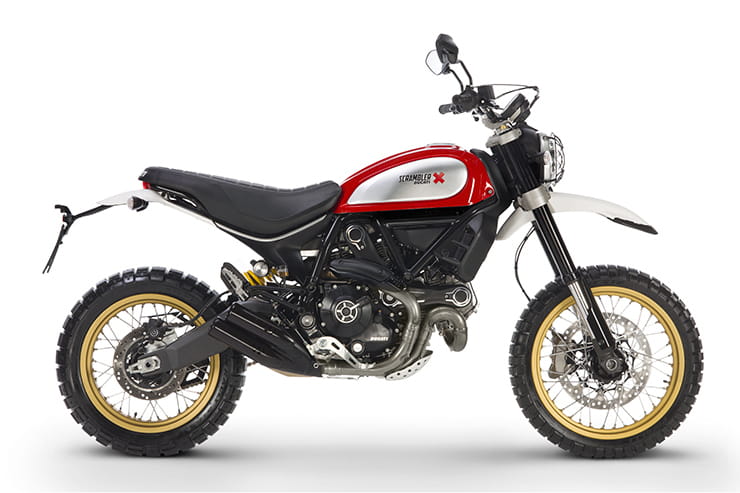 It is hard to recommend the Sled as a long-distance bike simply because it is so exposed. You can cover reasonable mileages at a slow speed as the seat is fairly comfortable but at anything over 60mph the very upright riding stance and wide bars put you directly into the wind flow, quickly leading to fatigue as your body acts like a sail.

In terms of rider assists, you get ABS as standard on the Sled and cornering ABS on those bikes built after 2019, but that is it. Ducati didn’t put traction control on the Sled and in truth it doesn’t require it. The updated model can run Ducati’s multimedia platform and there is a USB port under the seat. Accessories, however, that’s another story...

On the accessory front Ducati launched a whole range of options from luggage (small leather satchels or tool rolls) to clothing, helmets, belts, T-Shirts, you name it. Just like the Scrambler, the Sled was basically one big marketing opportunity. When it comes to the bike, generally you are looking at an aftermarket end-can (usually a high-level Termi), beefier brush guards, possibly a few bolt-on goodies such as tail tidies, crash bars or stubby levers and that’s about it. Not that may Sleds get customised, it already looks cool enough.

Although the Desert Sled is marketed as a rugged adventure bike, the vast majority of owners buy it because it looks far more impressive than the Scrambler models. An extremely well styled and cool bike, once you stiffen up the standard suspension to lose a bit of the pitching sensation it is a great bike. It’s just a shame the used prices remain so high.

Three things we love about the Desert Sled… 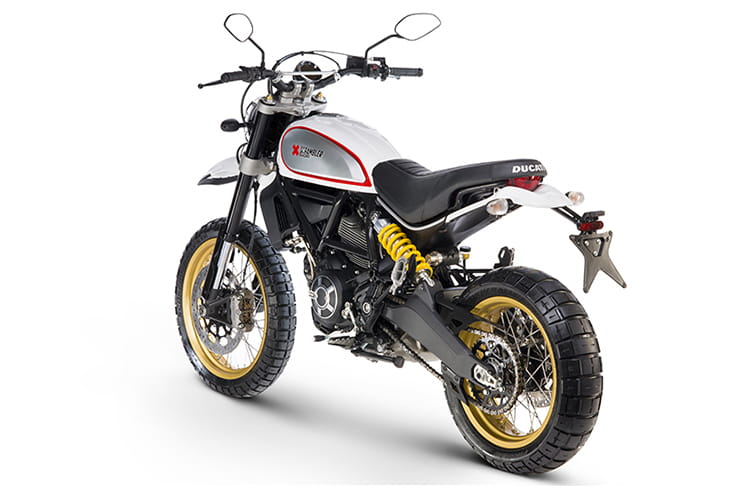 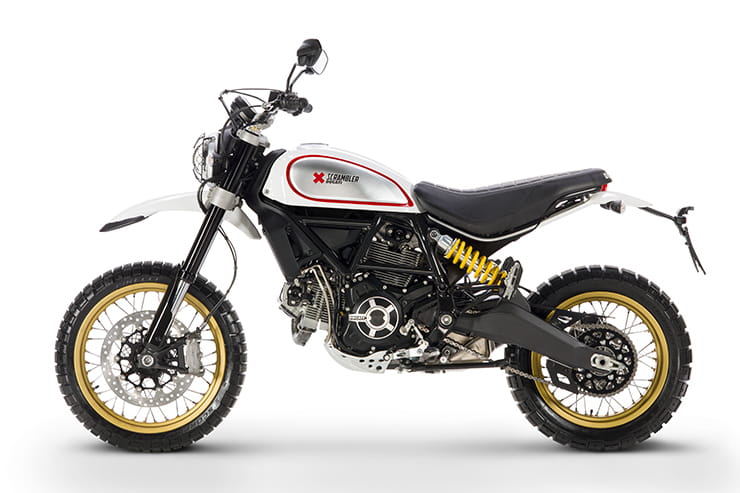