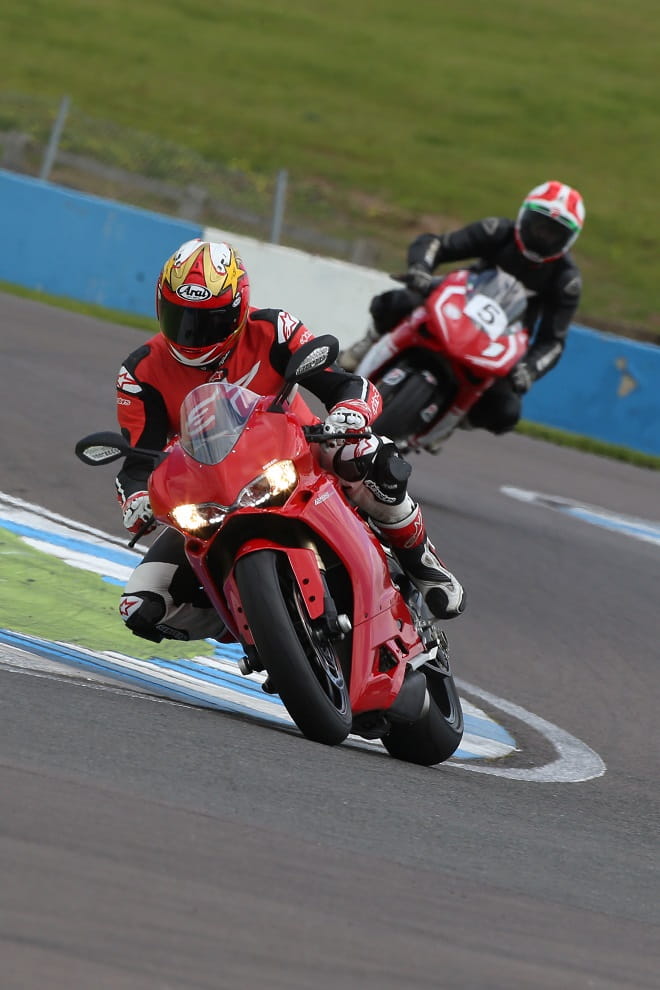 With the LED headlights and fully electronic suspension of the Ducati 1299S grabbing the Ducati headlines last year, it’s easy to forget there’s another top flight sports bike in the Ducati fleet for 2015 – the standard Ducati 1299.

It’s a thoroughbred Ducati sports bike in the finest Bologna style but the standard version (if any 1299 could be called standard) does away with the Ohlins electronic suspension and uses Marzocchi 50mm upside down forks in their place. Yet it still has all the electronic gadgets like traction control, electronic engine braking, wheelie control and the glorious MotoGP-style quick shift auto blipper down change. Not forgetting that 205bhp L-Twin motor.

At first glance the new 1299 may look similar to the 1199 but the whole bike is new from the ground-up. On the surface the 1299S may appear to be the same bike as the 1299 but look deeper and there are a host of detail changes.

We rode the bike at Ducati’s track day at Donington Park. To say we came away impressed is a massive understatement.

I’d selected Race mode. It’s the most aggressive fuel map out of the bike's options, gives you full power and turns the ABS to minimal, and the anti-wheelie control down to two out of five. Five being anti-wheelie, and one being minimal wheelie control. 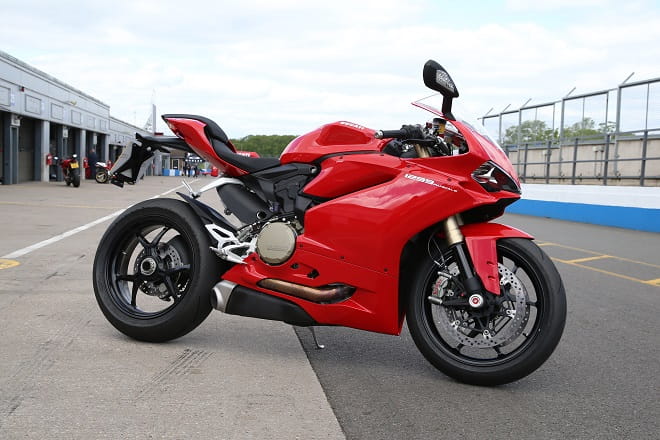 With very little wheelie control on the bike comes right up under power and you have to ride it old school, ie, shut the throttle to keep the front end of the bike down. It’s hardly a hardship and what I’ve been used to for most of my like. But when you know there are other toys available it’s a shame not to use them.

With the wheelie control pushed up to 3 you can come out of a corner with the front wheel hovering inches above the tarmac, the orange lights on the dash kicking in to warn you that the electronics are taking over. Stay on the gas and the rear tyre is sliding but being caught by the traction control and then wind it on to exit corners like Dovizioso trying to catch Rossi on a Sunday afternoon.

Nothing can prepare you for the way a 1299 comes off a corner and bangs through the gears using the quick shifter. It’s not just the acceleration. The sound is pure SBK, even on standard pipes.

The 1299 makes a claimed 205bhp and dyno runs have shown 1299s making in the region of 195bhp at the rear wheel so you’re dealing with some serious horses. 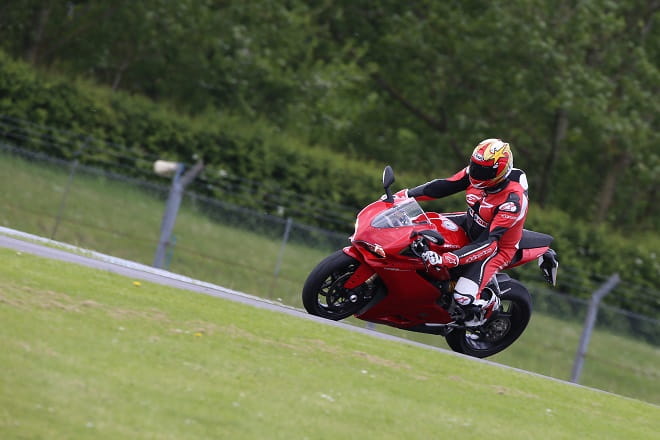 But with the electronics turned on, and the bike on full chat you can learn to lean on the incredible Bosch Inertial Measurement Unit (IMU).  The IMU is the brains of the bike. It uses inertial measurement to tell the bike how much traction control to use, how much wheelie control to use, what lean angle the bike is at, and how much ABS to apply when in corners.

It’s the single biggest advance in motorcycle technology in the last ten years, in my humble opinion.

With the cornering ABS switched on you can brake at full chat into a corner like the Melbourne Loop hard on the brakes right up to the apex of the bend. You can feel a slight pulse at the lever which lets you know the ABS is working and it pulls you into the corner tighter. It’s hard to get your head round, but it works. A mate of mine from the California Superbike School which also use Ducati 899 and 1299s says it took him a wehile to get used to it too but now he leans on it all the time when instructing.

Compared to the 1299 S the suspension may not have the fancy semi-active suspension set-up of the standard bike but on track it doesn’t really need it.

As standard the forks are set quite soft so you end up using quite a lot of the travel when hard on the brakes, which can sometimes lead to pumping of the forks on the way into corners. Stiffening it up for track use would of course help this. Of course they are fully-adjustable.

But the rest of the time the forks give good feel. The bike turns in quicker than the 1199 and once into the middle of the corner and you’ve released the brakes there’s good feel and high mid-corner speed.

The rear suspension did no wrong all day and in some ways feels nicer than the Ohlins stuff which takes a bit of getting used to. 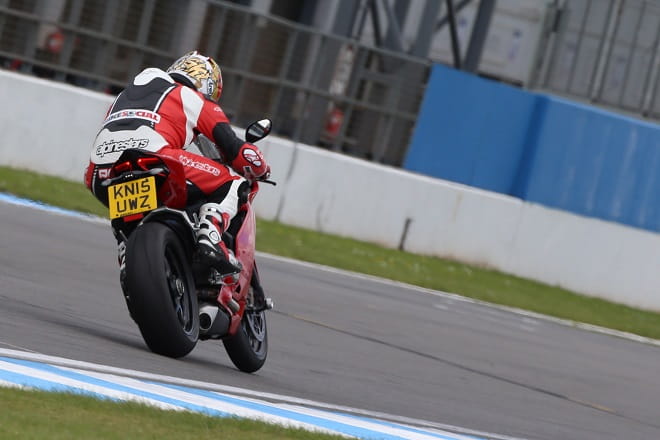 For instance, when you get on the gas the Ohlins electronic stuff firms up so you have to relearn the feeling of the tyre under acceleration. It's brilliant, but the feeling takes some getting used to.

With the Marzocchi kit, it’s old school all the way. Load the throttle, feel it slide slightly and the shock loads the rear tyre as the bike pitches back under acceleration.

ltimately the suspension on the S version is the future and on-the-road makes for a nice ride, adjusting its damping to the bumps on the road. Over the next few years it will of course make its way down to the other models too. But is it worth an extra £4100? For a lot of riders that’s £1 a mile over a three year PCP finance deal like the Ducati TriOptions finance. You’d have to be a rich man to pay the difference, or work a good deal withyour dealer!

Yet ultimately the S versions are the ones that usually sell faster proving the point that Ducati riders are often minted and want the 'best' kit. And nobody wants to have the ‘so you couldn’t afford the electronic suspension version? ‘

If it was me, for the road and occasional track days, I’d buy the standard bike. 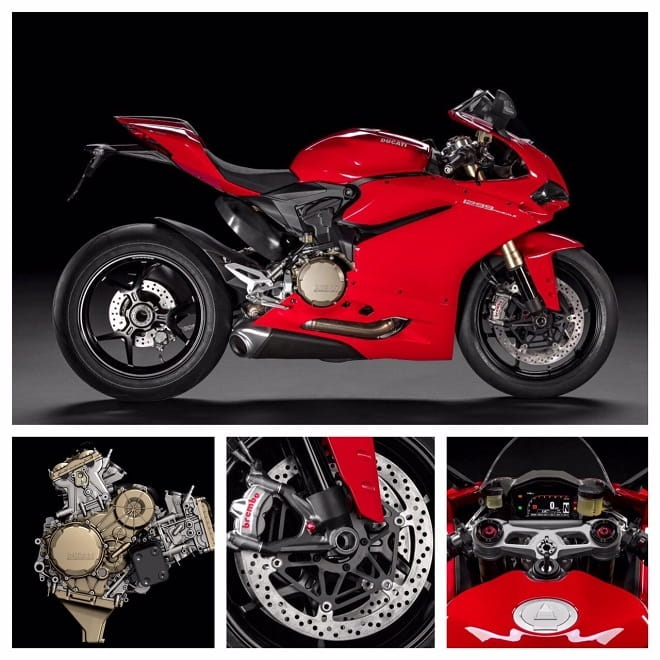