What happens if you take a 650 super twin and replace the engine with some lithium-ion batteries? You get Brammo’s electric bike, that's what.

Called the Empulse R, Brammo claim it is the world’s most advanced electric motorcycle and can reach 110mph. Whether it is the most advanced or not is up for debate - the Mugen Shinden John McGuinness rode at the TT to a 115mph average lap might argue. As might the claimed top-speed of the 149mph Italian-built Energica superbike, but you get the idea. 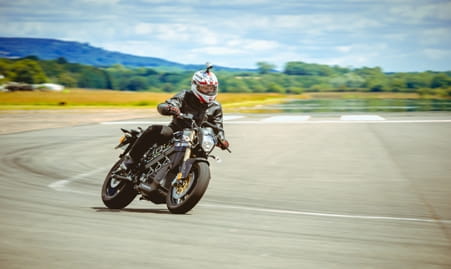 The Oregon-based manufacturer is now making their bikes available for sale in the UK at £15,350. We were invited to ride it at the Top Gear track at Dunsfold Park yesterday.

Let’s get straight to the point. It’s a fair assumption that not every motorcyclist is embracing electric technology. Mention electric-powered motorcycles and the same old points of discussion are raised each time relating to the removal of noise, smell and mechanical feel and replacing them with an increased price. Some of those points are true.

However, efficient motorcycling using alternative power sources be they electricity or otherwise is on the cards for the industry, the question is how many generations will it take before it’s the ‘norm’?

Only last week Harley Davidson announced its own electric bike called the Livewire. Zero, Lightening, KTM, Yamaha and Osset are already playing in this field, while others are keeping their development under wraps for now. And in the world of electric bikes new manufacturers like Brammo are popping up all the time.

Back to the Empulse R. Greeted with perfect conditions at the famous yet very bumpy track, the first point to note is that unlike any other electric bike, this has a 6-speed gearbox and a clutch. The gearbox is used in conjunction with its lithium-ion batteries and water-cooled motor to provide approximately 54 bhp that will take the bike to a claimed 110mph. 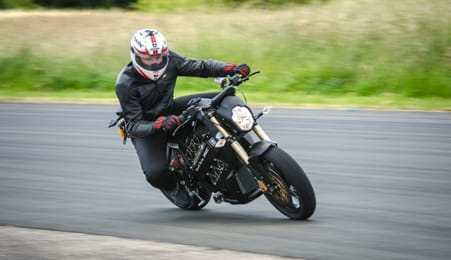 The technical specialist on site does his best to scramble any existing motorcycle-riding-ability with information such as “you can pull away in first, second or third, whatever you want really…oh, and you don’t need to use the clutch to pull away either. You can use it to change gear, or not. It’s up to you.”

Pulling away is a doddle, just like you’d expect on a twist-and-go with bags of torque to feel. Yes, I started gently in 3rd and yes I didn’t use the clutch.  Another journalist did and the bike just made a mechanical whiney noise. Ride off from standstill in first and normally you’d expect to be into the next gear quickly, but not when using third.  Fine, you’re not going to beat a 600 off the lights but while he’s tapping the gearshift you’ll be at 50mph or so before you need to. However, you’ll have two concerns; when to change and whether to use the clutch.

As far as we’re concerned electric bikes are about efficiency, new technology and the future of motorcycling yet Brammo have designed their bike to look and feel like an existing machine, it looks like the offspring of an ER-6f and MT-09. So, while the 21st century bike uses all sorts of new tech, some may feel disappointed by the old-fashioned rev-counter and display. Compare it to BMW’s cEvolution and you’ll know what we mean. That bike manages to maintain the BMW badge for quality while feeling way more futuristic.

Old-fashioned rev counter with its red line at 6500rpm aside, there are still flashing lights to tell you when to change up, clutch-less if you want, but do make sure you shut the throttle almost completely if you decide to forgoe the clutch. 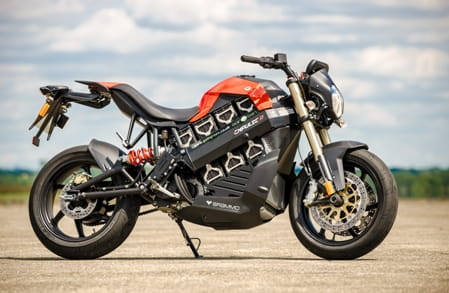 It looks and feels like a regular internal combustion engine bike, I was expecting bulk and weight because of the batteries and was really surprised at how agile, light and grippy the bikes and its aluminium frame were. It's very confidence inspiring which may have something to do with the Continental SportAttack 2 tyres which worked well on the Brammo.

The circuit is wide and fast but bumpy with plenty of tarmac and concrete changes plus the occasional pot hole, especially on the apex of the ‘follow-through’ if you know the circuit from watching it on TV. I’ll bet that’s not on the computer game version! 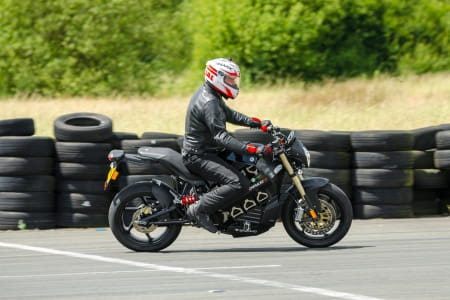 If you rode it through town the regeneration (energy returning to the battery system) would be more apparent under deceleration providing an engine-braking feel. However, this wasn’t the case on the track at speed and I was pleasantly surprised.

Once you understand how the system affects your riding style and approach to cornering, you can use the gearbox to slow, but not like you would on an conventional petrol bike. Simply look at the front brake and the stopping power of the 310mm floating disk Brembo’s will have your eyelashes brushing your visor. Brammo claim city riding will achieve 128 miles from a full charge while cruising on the motorway at 70mph and you’ll drain it in 58 miles.  Combined styles will achieve a claimed 80 miles, more than enough for commuting and for short weekend rides. Sadly we didn't get chance to test the range fully, but will get one on the road for testing soon.

Re-charging takes place wherever you can find a standard three-pin socket, so long as you have the relevant J1772 lead which comes with the bike. It plugs in where you’d expect to find the fuel tank and makes a noise like a hairdryer as the cooling fan kicks-in on charge. Every 10 minutes of charge equals 5 miles of range with a claimed fuel efficiency of 438 MPGe (city riding).

As far as the Empulse R goes, here we have a bike built for tomorrow, aimed at today’s audience, yet it still has some of yesterday’s components, and a price that's not comparable with equivalent petrol-powered bikes.

Forget for a moment all the cliches of electric bikes being heavy. It's not. Not in weight at least. At 213kg, the Empulse R weighs 1kg less than the BMW F800GS, 6kg less than the Honda NC700X. Okay, so it's 9kg heavier ready to ride than the Kawasaki ER-6n ABS.

I really want to like motorcycling of tomorrow and the Empulse R in particular. So much so that we’ll be riding it away from the track later in the summer to offer an idea of how practical and efficient it is, so keep your eye out for part two of our review.

Brammo is distributed in the UK via Going Green Ltd (www.goingreen.co.uk) and Darvill Distribution Ltd.