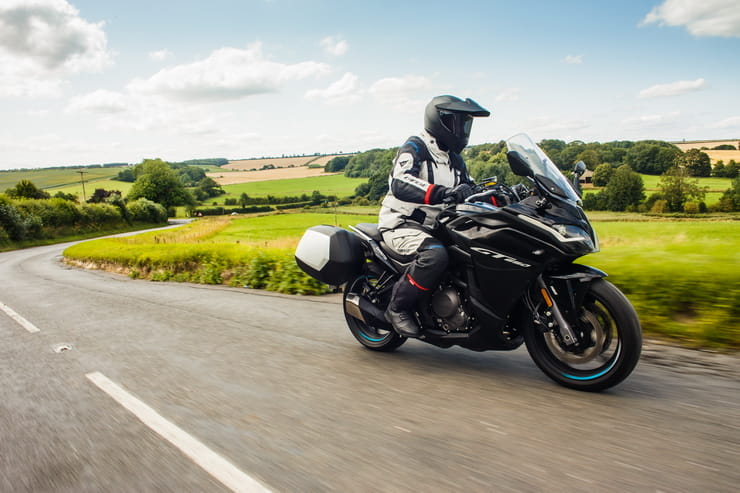 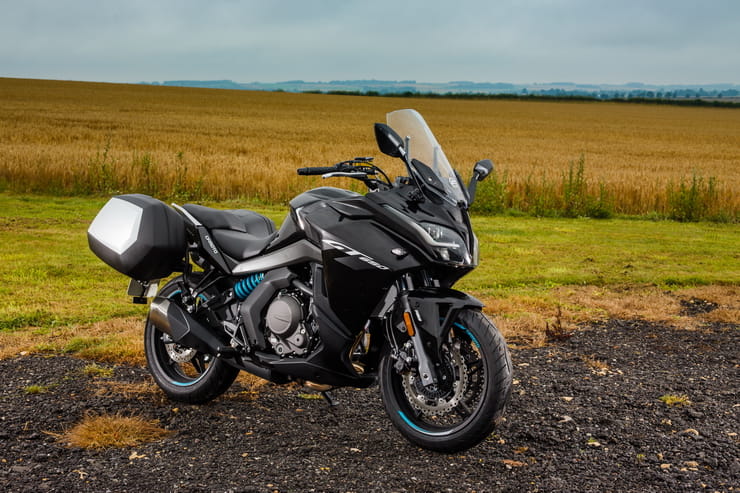 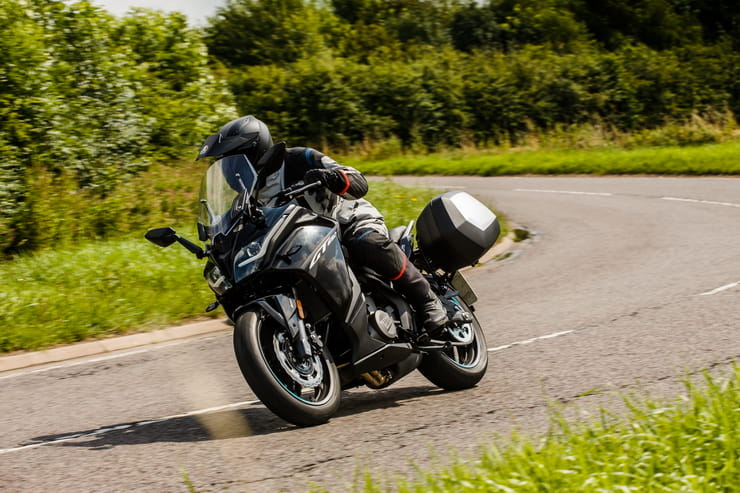 CFMOTO are hardly new to the motorcycling game having been making individual components as well as the full blown two-wheeled machinery for over 30 years, contributing to the 600,000 vehicles the firm produces annually out of its Hangzhou HQ in Eastern China.

Previously trading as WK Bikes brand in the UK, the Lincolnshire-based importer, Quadzilla, has recently reverted back to its Chinese name, and it is without doubt the Chinese brand that has made the biggest inroads into European acceptability, particularly with higher capacity and better-quality machinery.

One of those higher capacity bikes, using the 649cc parallel twin engine that is very close in design concept to the Kawasaki ER-6 motor, is the CFMOTO 650GT, the latest 650 in the range to use the same base engine. The mid-displacement tourer comes with plenty of plus points on its spec sheet with LED headlights, a sensibly positioned double 12v USB charging port, a 5” auto-dimming TFT dashboard with two layouts and a strong, sturdy frame to house its swish KISKA styling. Off we went for a cruise around some of Lincolnshire’s finest roads to see if the 650GT could woo us with a ride quality to match its attractive price. 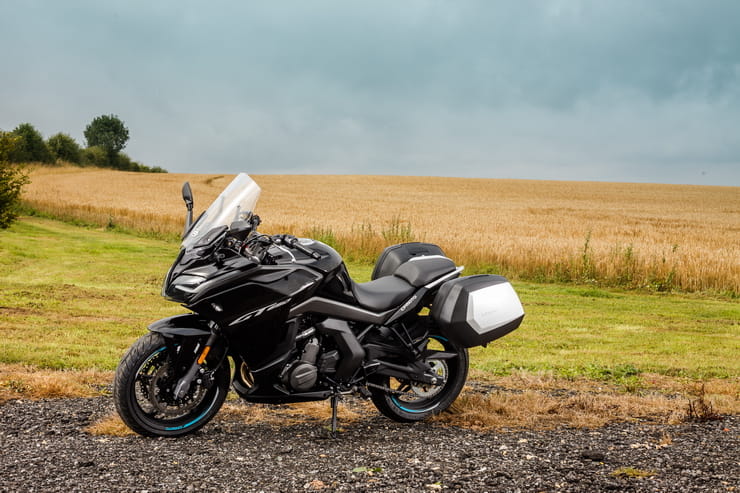 Diving straight in with one of the headline facts; £5799 is an attractive proposition for a whole lot of machine. Especially pound (lbs) for pound (£) with a claimed wet weight of 226kg, then there’s massive value. Our test bike had been fitted with SHAD panniers which are an additional £475.99 as well as a few more KGs.

Using a 649cc parallel twin, liquid-cooled engine reminiscent of Kawasaki’s own rather resilient version, the CFMOTO’s performance figures don’t quite match up to the green machine: 61.7bhp (46kW) peaking at 9000rpm won’t be enough to blow your skirt up (a John McGuinness expression) nor will the adrenaline get pumping too hard with a torque figure of 43.1lb-ft (58.5Nm) @ 7000rpm but that’s not what this touring-derived bike is about. It doesn’t need to compete for bragging rights versus an R6 at the traffic light GP nor does it require audacious three-figure roll-on motorway battles with Audi A5-driving salesmen, though if truth be told it’ll comfortably sit at 100mph should some speedy touring opportunities arise.

Commuting, touring, meandering or simply enjoying being out and about on two wheels, and to those riders who don’t give a hoot about 200bhp or electronically controlled preload settings, then the 650GT is a as friendly as a hug from a man in a bear costume at Disneyland. 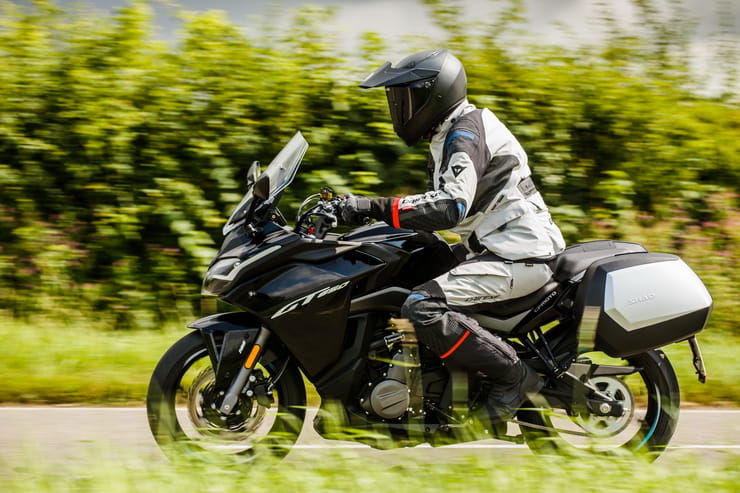 What it does do well is provide economy figures north of 50mpg thanks to its docile rev range, optimal between 5000 – 8000 rpm, while the 19 litre tank should easily take at least 200-miles to drain. Anything under 4000rpm and it’s a little gutless, so keep the revs up and the ride will be rewarded. Peak bhp may well be on offer up at 9000rpm but that’s a little too close to the 10k redline and overworking the throttle isn’t necessary on this type of machine… unless you rate your chances against the R6.

Once into its stride it accelerates sweetly from 4000rpm through the gears offering a pleasant and easy ride at a fairly relaxed pace, which should help endear it to the relatively inexperienced riders that CFMOTO is targeting.

A smooth and linear feed of power with a light-action clutch are also symptomatic with its languid character and ease of use. With a sub-£6k price, there won’t be any quickshifting going on here but the 6-speed cassette type gearbox reminds of less electronically-assisted days and it didn’t miss a beat while being subjected to some energetic testing, and that’s on a bike with less than 300-miles on the clock. Neutral is easy to find and there’s nothing fiddly or too resistant about the gear lever either. 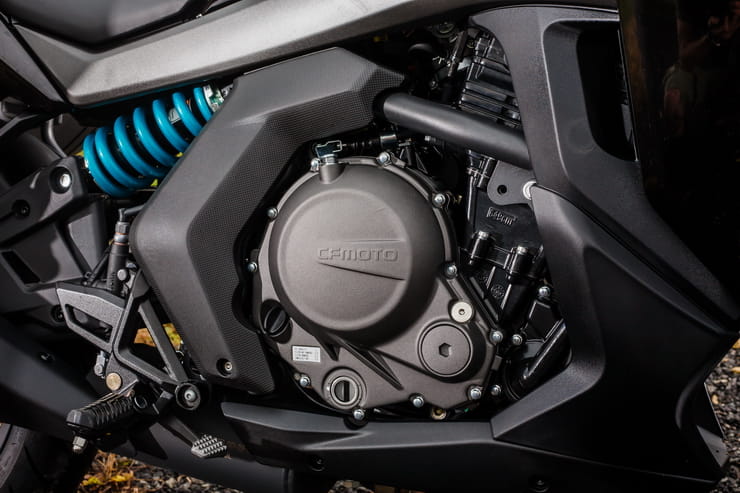 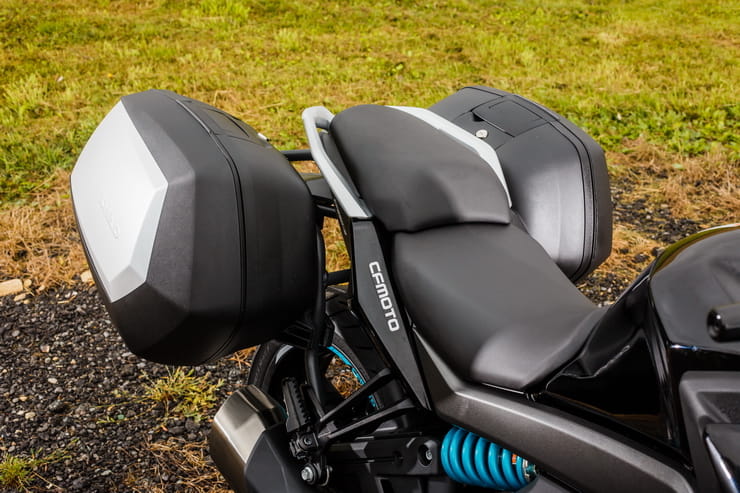 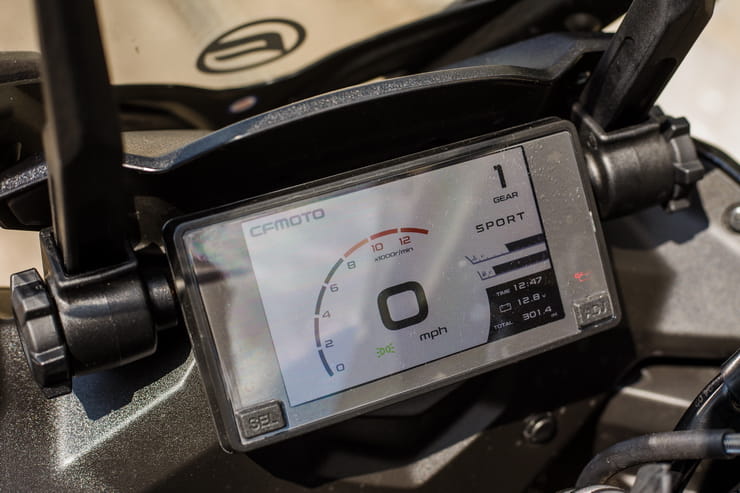 The handlebars stand proud above the top triple clamp and offer a relaxed, unaggressive riding position which suits its purpose. Here is a bike that knows what it wants to provide and does so with minimum fuss. There are few bells and whistles across the bars and dash to get confused with but enough in terms of quality styling and components to impress, given the price. The riding position is suited to those shorter in the leg with a very accessible 795mm seat height while the adjustable screen is a cinch to use and allows riders of all shapes and sizes to find their optimum setting. It’s high enough to get tucked in behind for the more ‘interesting’ roads, or even big motorway miles, and gives a sensible amount of weather protection. Everything has to be taken in context here – the bike costs less than £6k remember.

Even though the seat is low, the fuel tank seems high, as is the centre of gravity on the 650GT meaning the generous lock-to-lock steering angle could be a hazard if the tank is full and the maneuverer has less experience. It’s just a point worth noting. When on the bike, the softly tuned all-rounder is well balanced thanks to its strong frame and low slung engine. Conventional KYB forks and rear shock performed better than I imagined – instead of unpredictable lolloping into and around corners, they did a fine job given the bulk they were carrying around – that’s the bike, extra panniers and me, a combined 320kg. Yes, that weight was apparent but the CFMOTO was up to the job and provided a very pleasant gallivant around some of the twistier and challenging roads of North Lincolnshire.

A set of J Juan calipered discs on the front and a single disc on the back are coupled with Continental ABS, and were challenged at slowing or stopping that combined weight. A challenge they stood up to. Braking on a bike like this being ridden by a competent rider should not be an issue on the open road with engine braking a two eyes to assess the upcoming dangers, moreover it’s their suitability to sudden reactions and ability to stably halt the bike where they are tested. Thankfully, when tested, the ABS didn’t interfere too much and my faith in the Spanish brand of caliper who provide their products to many manufacturers, continues. 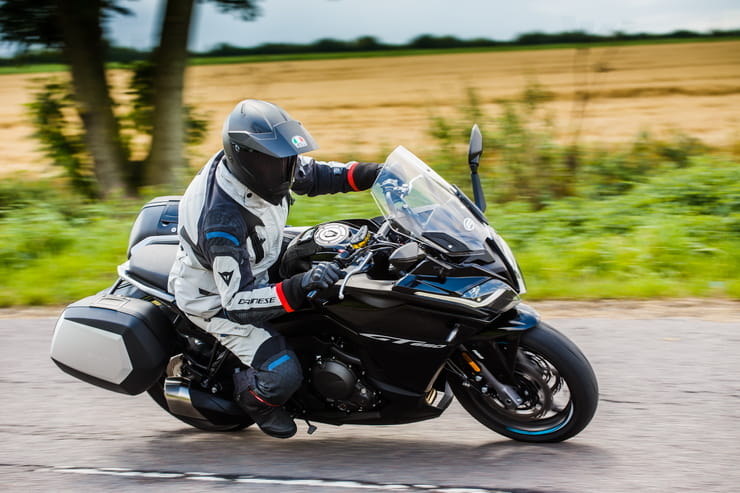 A low seat height makes for incredible accessibility and versatility, allowing for riders of all shapes and sizes to comfortably swing a leg over and stand flat footed, which is handy given the top-heavy weight of the 650GT. At 226kg without the panniers or their fittings, yes that’s over 30kg heavier than the Kawasaki Ninja 650, it sure is a sturdy bird whose low and even no speed balance takes a little getting used to. That said, the light clutch and plentiful lock-to-lock steering angles make for manageable manoeuvring.

A fairly simple to operate height adjustable windscreen adds to the riding options and even though I’m a six-footer, I found the stability of the screen and its job of protecting me pretty decent. It also fits the bike well in terms of the design, sweeping neatly up from the nose on the same angle rather than sticking out garishly. Fairing-mounted rear-view mirrors are simple to manipulate and provide an unshaken view behind while the seat to handlebar reach positioning are ideal for comfort, the seat to foot peg was a little cramped for a rider of my size. Even though we didn’t put big miles on the bike during our half day test, the cockpit seemed roomy enough to move around with the pillion part of the two-piece split seat offering a decent support when moved right back in the rider’s seat.

Considering its target market of the touring types then I’d have expected heated grips and maybe even cruise control but then again, it has been built to a budget. The Metzeler Roadtec Z8’s are worth a shout-out too – they may have been around for the best part of a decade but remain composed, predictable and are a great asset to the bike. 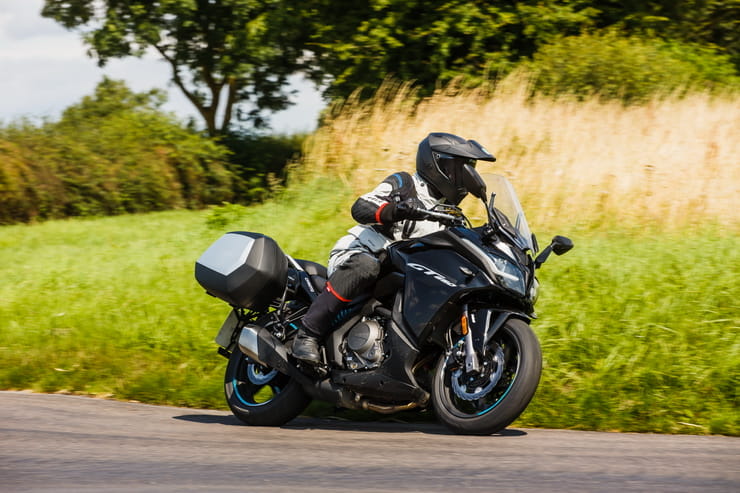 In a competitive market, the middleweight sports tourers are sure-fire sales chart winners with their versatility and lb-for-£ impact, but how does the CFMOTO line up against three Japanese rivals?

Blending of a dash of sportiness with helping of touring practicality and a hearty dollop of all-around versatility, CFMOTO’s 650GT is one of the most over-engineered bikes I’ve ridden. Given the price point, the build quality, finish and styling are excellent.

Yes, it’s heavy especially with a centre of gravity that is higher than most, and yes that means the bike needs to work every one of those 61.7 horses from its parallel twin which is a little subdued under 4,000rpm but you have to take the rough with the smooth… cut out your daily muffin and large latte and it’ll be paid off in two years!

Comfortable, with a highly suitable riding position for the shorter rider, the tidy and well thought-out additions of a duel USB charging point located under the left handlebar as opposed to under the seat like so many others, plus LED lights and the stylish little dash all add up to the Chinese tourer offering terrific value for money. A two-year parts and labour warranty go some way to appeasing the build-quality naysayers. It’s a genuine challenger in the mid-capacity budget touring market. 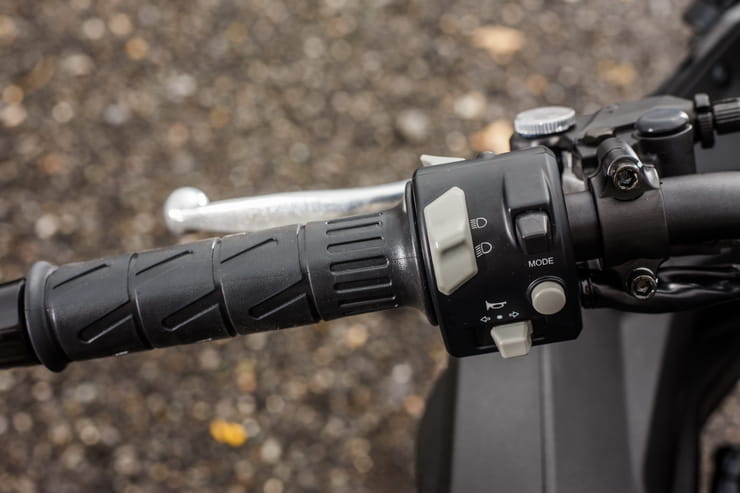 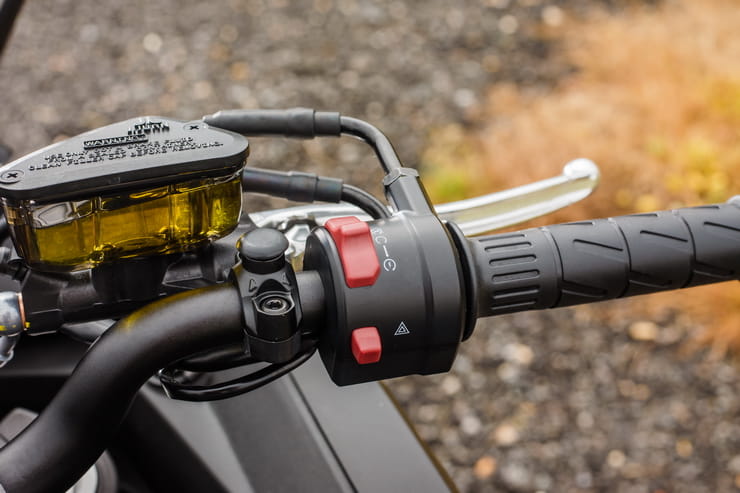 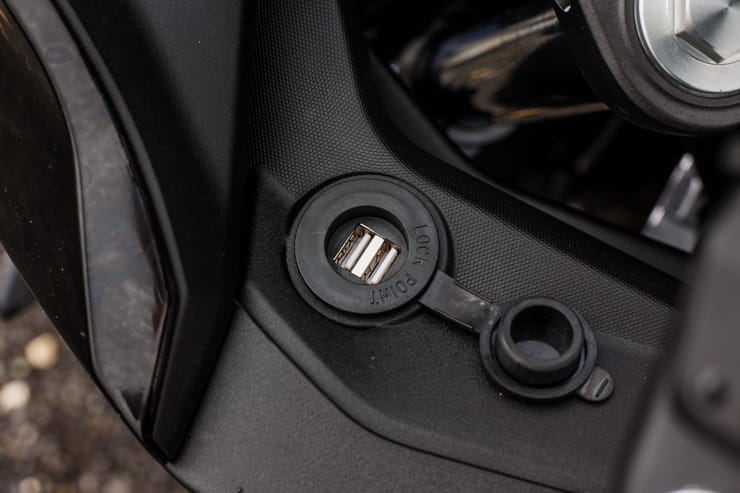 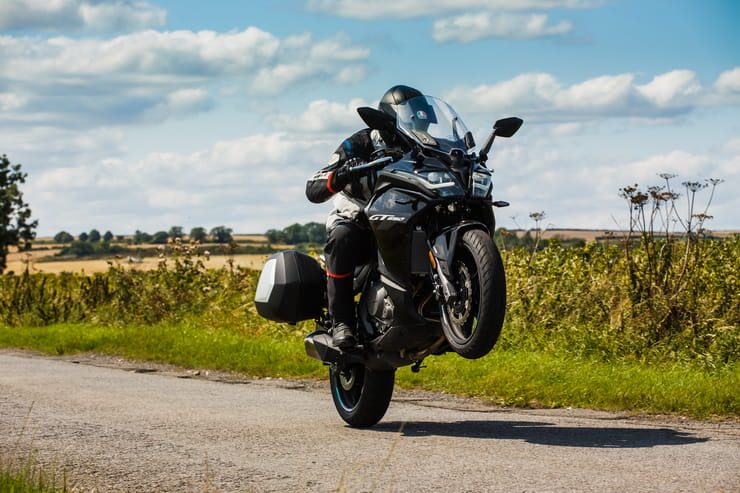