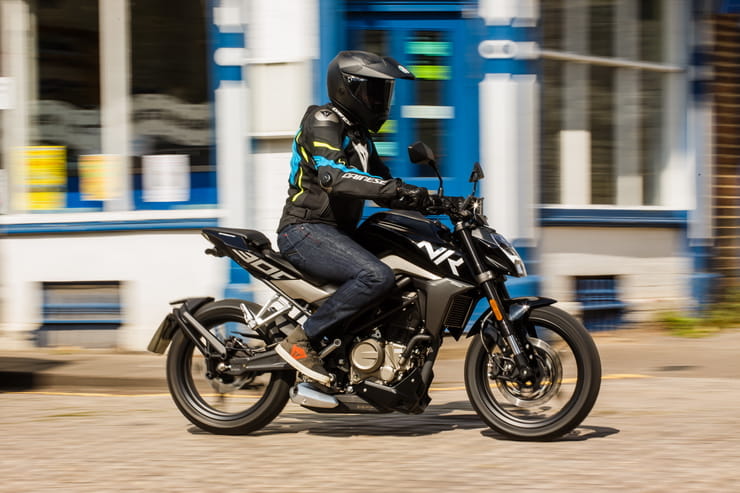 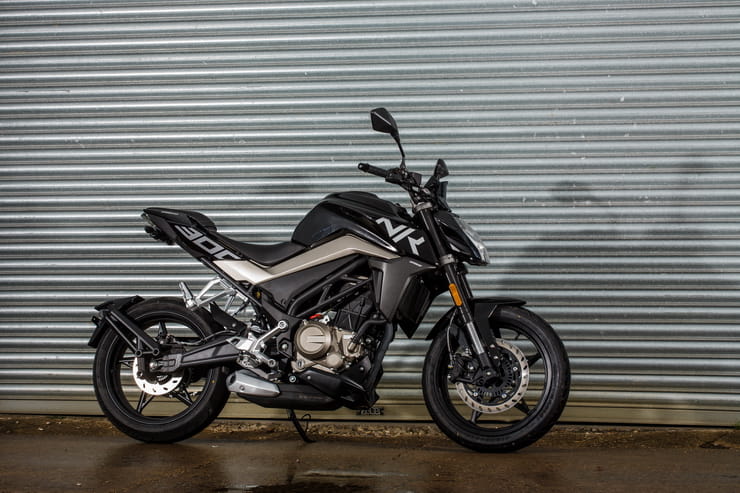 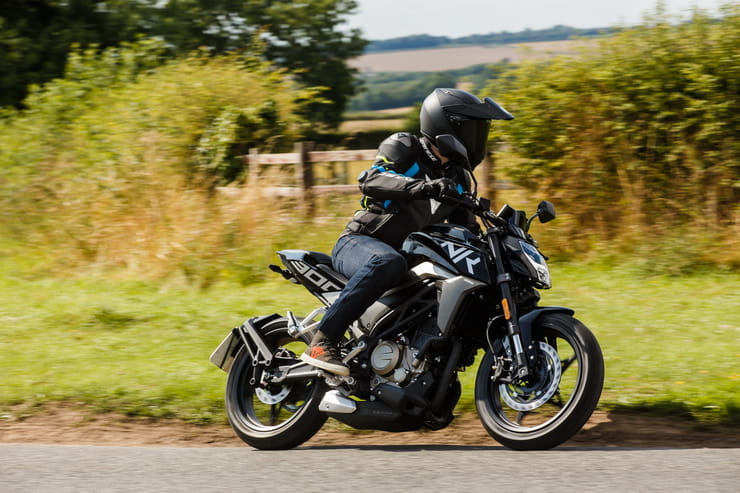 “If you don’t come back with a grin on your face, you’re a miserable sod,” said the engineer at CFMOTO’s Horncastle-based UK headquarters as I prepared to saddle up and spend a few hours on the first CFMOTO 300NK in the country.

CFMOTO, previously sold under the WKBikes brand in the UK but now reverting back to its Chinese name (Fun Fact: the CF stands for Chunfung which translates to ‘Spring Awakening’), is without doubt the Chinese firm that’s made the biggest inroads into European acceptability with recognition and respect. And by producing bikes with larger capacity and power gives the more affluent European motorcycle buyer more of a choice. Even bigger machines are still to come but that’s another story.

This tiny, A2-licence compliant, streetfighter-style naked bike was only revealed over in Asia last month yet we’ve already been able to grab the world’s first ride and where better to test it than utilising its lightweight athleticism in a tight town scene before heading to some of the most exquisite B-roads in the country to feel all that 27bhp.

On first appearance the 300NK carries its head high with quality styling courtesy of the relatively new relationship with KTM’s design house, Kiska, and it comes in at a wallet-friendly £3399, over £1000 less than any other in its class. The build quality with some of the components plus its overall construction shines through, flying in the face of typical Chinese ‘build-em-yourself’ motorcycles. How long will they last? Well, that’s the real question and unfortunately unanswerable after a few hours in the Lincolnshire Wolds. Once upon a time we chortled at Japanese bikes but look at how that worked out.

Freddie Hinkley from CFMOTO’s UK importer, Quadzilla, told us about the investment the Chinese manufacturer has recently put into a new and sizeable factory, they see a gap for exporting higher capacity motorcycles across Asia and Europe as the demand increases. 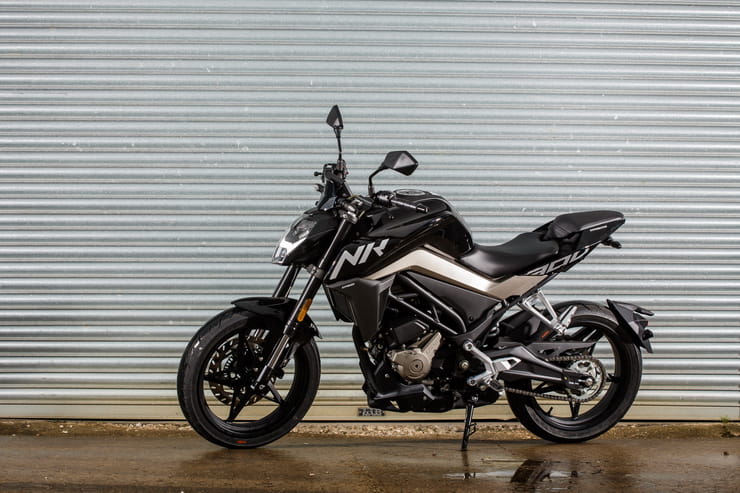 Available in two colours; Grey/Blue carries the synonymous CFMOTO blue colour wheels, frame, subframe and bodywork decals which may appeal to younger or more fashion conscious, while the Black/Bronze version is a little more stealthy and, dare I say it, grown up.

The rather pocket-comforting £3399 price tag is the USP here. At over £1000 under any of its competitors, the 300NK is an attractive proposition for riders from all categories – be it the logical next step up from a CBT or A1 licence, commuters, those looking for a second bike or even riders fed up with the running costs of a larger capacity machine.

Compromises have to be made if the price is as attractive as it is. While the four-figure saving over rivals in this naked 300cc class is eye-catching, what the CFMOTO gives away in power and torque is as noticeable on a spec sheet as it is during a test ride. 27bhp vs the 42bhp on offer from the genetically similar yet larger, revvier and more powerful KTM 390 Duke is a big loss – more than half – but at this level of motorcycling is the speed at which one can get through the McDonald’s drive-thru essential?

However, when talking about power and torque in a Top Trumps style with your mates, it’s easy to overlook weight, and at just 151kg fully wet and ready to roll, the CFMOTO 300NK is approximately 10-12kg lighter than the KTM (who only quote dry weight) which gives a key advantage in the battle of the twisties. 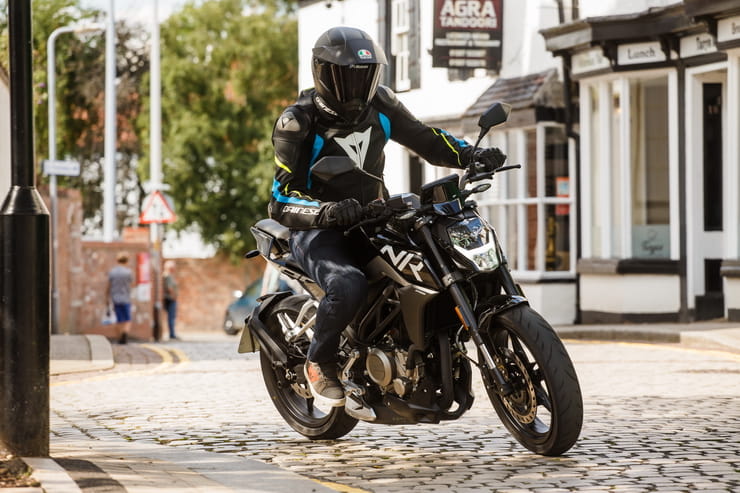 Once on the bike and it's fired up, the calmness of the non-thumpy thumper is noticeable and, with ear plugs in, I barely noticed the bike’s engine whirring below me. The 292.4cc liquid-cooled, single cylinder motor is incredibly user-friendly, even the snarling guard dog just 100 yards away from me at CF’s HQ, with its lack of opposing thumbs, would be able to balance the clutch bite point with the accelerator and get the bike moving. It’s a narrow, street-oriented machine designed to dominate traffic jams, conquer nadgery town streets and rule the car parks with a certain style. It’s an easy-to-operate, unthreatening and smooth motor that requires a bit of work and patience to reach any kind of performance yet scuttles around the town without fuss.

The 6-speed gearbox operation is soft through the lever yet direct, no missed gears here. Neutral is easy to find every time and being such a short-geared bike you’ll be forever changing up and down if your journey is laden with traffic lights, roundabouts and slow moving traffic. If you’re looking for the overtake then be warned, you’ll need a run up.

A stubby underbelly exhaust is tidily packed away and has a surround covering any nasty eye-sores. Its tune won’t offend neighbours but neither will it inspire the bass-hungry chavs in their lowered 90s hatchbacks should you frequent the local supermarket carpark on a Saturday evening.

A 12.5 litre tank is plenty in this size of bike, good enough so you’re not filling up all the time yet not too much to compromise the handling. The essence of a single cylinder sub-300cc motorcycle is its economy and running costs, so with a claimed figure of 108mpg, the frugality of 300NK is among its many positive points. 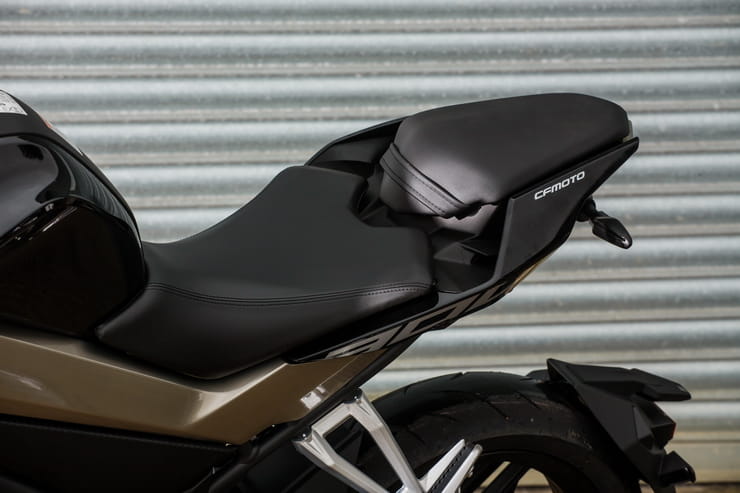 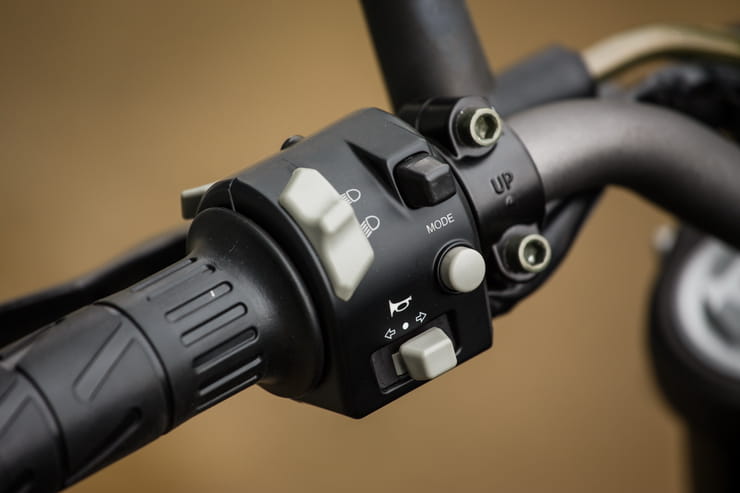 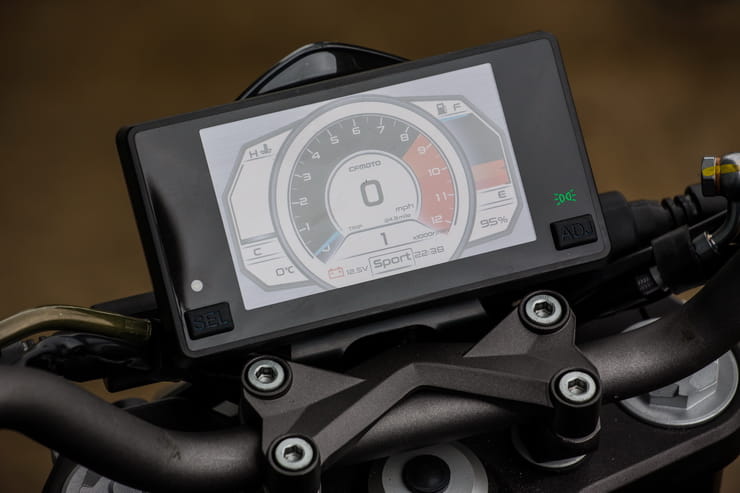 Above: two-step seat is fab as is the TFT dash but not the switchgear

The lightweight agility is apparent when scuttling around Horncastle’s town centre with dexterity. For a few photos, I circled the small market square, half of which is based on cobbles, about a dozen times which, other than amusing a couple of young children and making me a little dizzy, at least allowed for me to test the clutch bite point and balance of the little street fighter. It’s stable on the brakes and the seating position ensures a nice poise when flicking the bike around. Without going  back-to-back with its rivals, it’s hard to distinguish between the CFMoto and the KTM 390 Duke for ride quality.

The handlebar layout leaves a little to be desired. The main audience to which this bike will appeal would look for more imagination with the switchgear, even the ‘Mode’ button is easy to confuse with the horn, although you’d only do it once! Speaking of modes, differentiating between Sport and Rain is not a simple process except that on the TFT instrument screen the odometer is much easier to read in Rain mode! I felt like pinching the screen and separating my fingers to zoom in, like on your mobile.

One at the front and one at the rear but with JJuan calipers and dual channel ABS, they as effective as one might assume with only 151kg and the lardbucket in the saddle to bring slow down or stop. Rolling off the throttle and dropping down the gears have almost the same resistance as the front brake on a single-cylinder motorcycle. ABS will prevent skids but not burn-outs or wheelies. Ahem, so I’m told. Err… 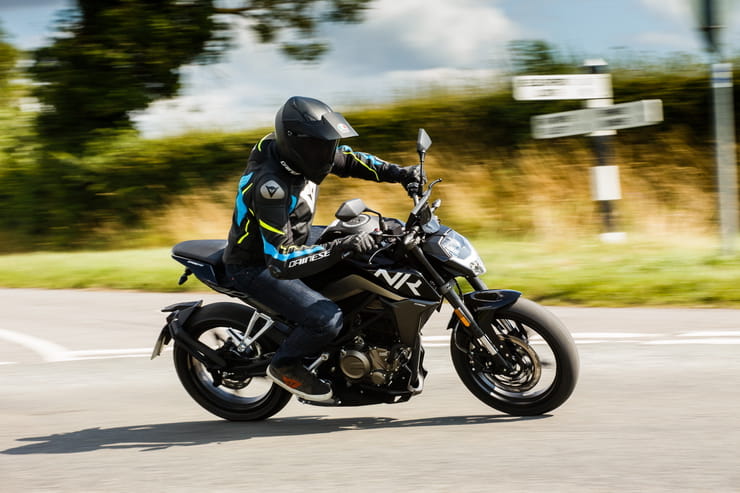 The seat height on the 300NK is a lofty 795mm which, for its sector, sits in between the lower Yamaha MT-03 and BMW G310R but not as tall as the KTM 390 Duke or Honda CB300R. It’s a narrow step-over, suiting the rest of the bikes making it highly suitable for the shorter or less confident rider.

The middle-aged and 89kg, 6-footer might not be target audience nor the ideal size but I fitted neatly in the split rider/pillion seat combo. Once on the bike I was more than comfortable and importantly, the position doesn’t feel cramped or undersized on the bike; the seat is wide and firmly padded, the bars are within thoughtful reach and pegs where they need to be, still offering plenty of ground clearance.

A tiny screen sits in front of the TFT dashboard and has an important role to play, not only to style the face of the bike but also to deflect the oncoming wind from around the rider. On one long stretch of road in the countryside, I wound her up and after a while saw figures north of 80mph, so illegal speeds are achievable if there’s plenty of run up.

An LED headlight plus daytime running lights all housed in a stylish KTM-esque surround are another neat touch to the overall appearance of the bike although I didn’t get to try them at night to test their effectiveness. 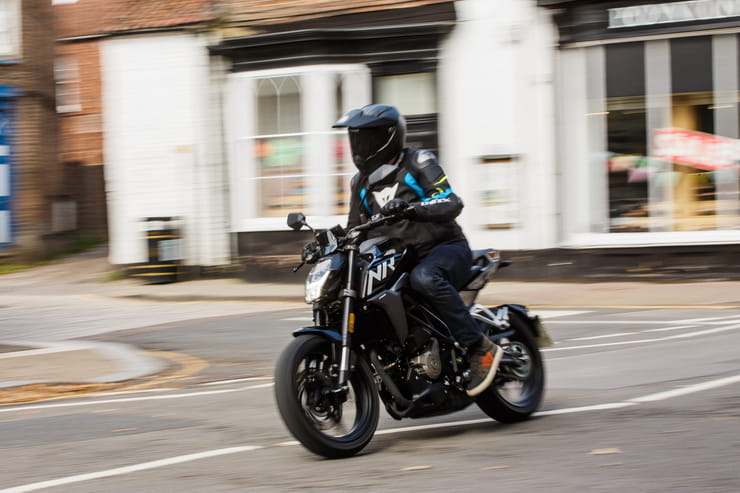 The most obvious challengers to the 300NK in this popular A2 licence-friendly segment are in the below table but keep an eye on the power-to-weight ratio if performance is key to your choice but the fact the CFMOTO is well over £1000 kinder on your pocket could and should be influential:

Look no further for a bargain and stylish A2-licence compliant naked 300. The CFMOTO is a brilliant machine for darting through the towns or cities, as a step up from a CBT or A1 licence depending on experience, or even as a lightweight and more manageable alternative to a +600cc bike.

There’s plenty of really neat detailing and tidy finishing that may well start the revolution and general feeling towards Chinese imports. It’s so much cheaper than its rivals and a two-year parts and labour warranty will go someway to helping justify steering clear of the more house-hold names such as Honda, KTM and BMW.

Swap the (legally-required) number plate hanger and opt for an after-market tail tidy and there’s a good-looking, highly entertaining small capacity motorcycle on offer. Pound-for-pound, there’s not many that would provide the type of grin promised by that engineer. 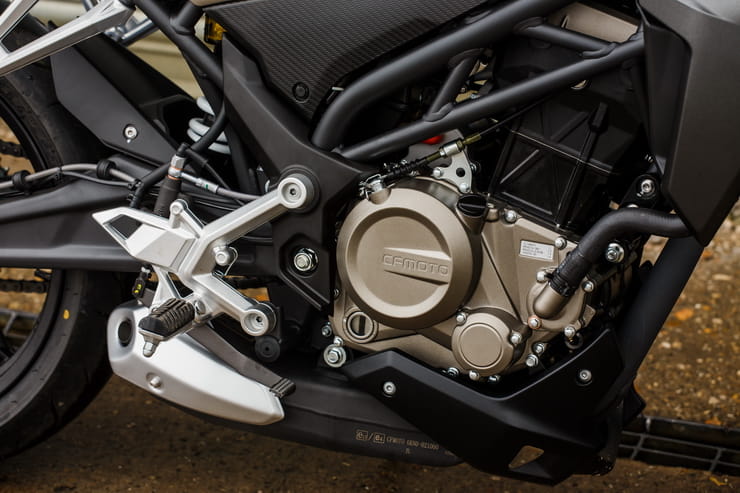 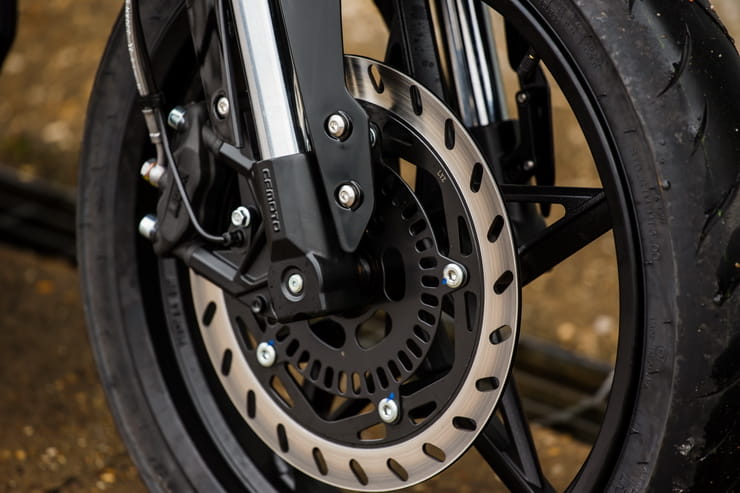 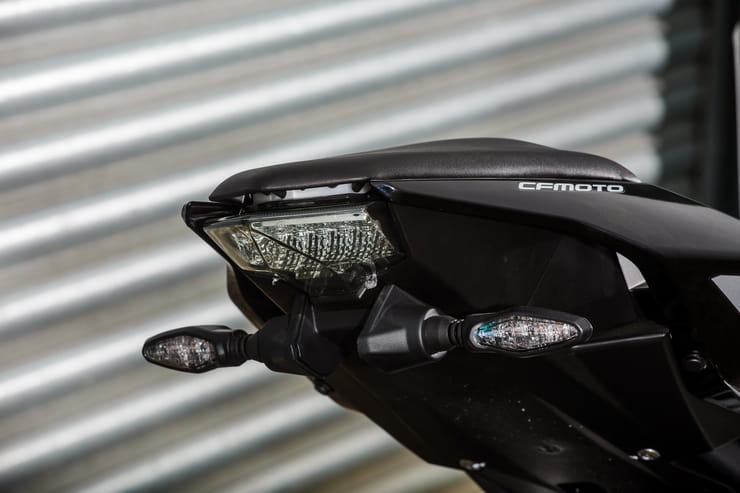 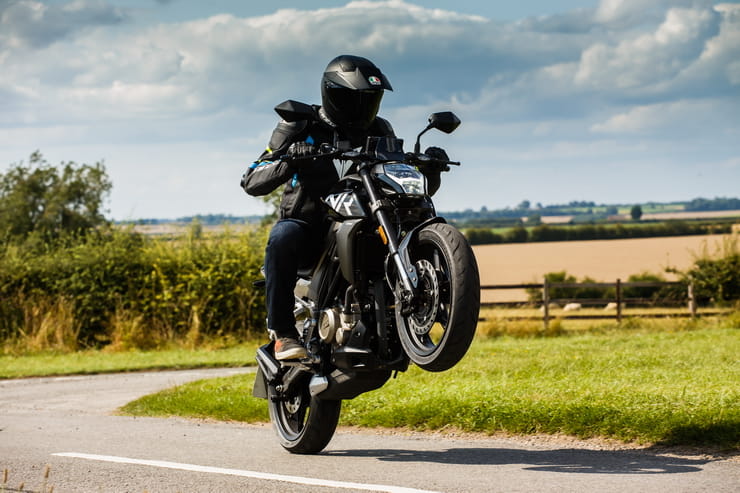