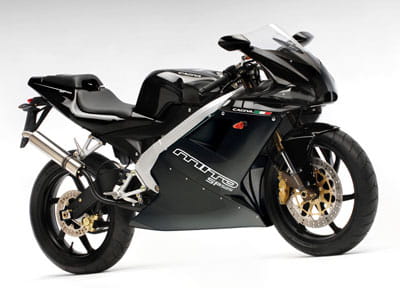 Cagiva’s series of Mito 125cc machines will always hold dear to thousands of learners and fully-fledged motorcyclists alike regardless of whether they owned or rode one. The simple fact is the Mito is one of those bikes that make you smile because of its successful formula of rev happy, powerful single-cylinder two-stroke engine in a light, race-spec chassis.

The 2009 SP525 is a modern day take of the old Mito 125. Not just a makeover, but a thorough revision. The obvious change is the SP525’s new face. The styling mimics John Koscinski’s Cagiva V594 of 1994 that he rode like a demon during the old blue riband 500GP series. Even though it has legal requirements of lights it is a damn good copy and makes the SP525 the sexiest 125cc learner bike ever to rock on open roads.

As with all Mito machinery, there are two versions available: a learner legal 14bhp version and a full Monty 24bhp missile. And it is a missile. The legal version’s engine is effectively neutered and for this reason should remain in one piece for many a mile. This is also helped by a carburettor that is part controlled by the ECU to help reduce wide open throttle response with a cold engine. There are no worries about emissions compliance because it has two catalysers within the exhaust system.

There’s a mile wide chasm in difference to the performance of restricted and unrestricted engines. While the ‘healthy’ one can spin up to 100mph-plus, the legal one wheezes its way to a creditable 70mph on a good day. Not that this is too much of a problem because the aluminium frame and its race-ready geometry can cut through corners like a laser through air. Seriously though, everyone should have a chance to enjoy the meeting of a 129kg motorcycle and a series of bends (preferably a race circuit for the full effect).

- points – being of Italian build everybody assumes it will eat itself and replacement parts are non-existent, which isn’t strictly true in today’s internet-dependent world.