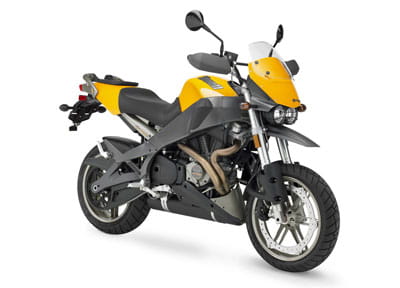 Buell had been steaming gently along producing quirky sport-roadsters with Harley-Davidson at the tiller, when it suddenly changed course to introduce an adventure-type machine in the shape of the Ulysses. Another swift manoeuvre later and the Ulysses XB12XT touring version appeared to not a lot of applause outside of the Buell Fan Club...

Not that there was a lot wrong with the Ulysses XT despite the ‘Useless’ tag offered up by non-Buell owners. What sets the XT touring version aside from the normal Ulysses is the shorter but ‘normal’ suspension and the pannier/topbox combo that is standard fitment. Both accessory packs are solid and secure and accept a fair amount of clothing/shopping etc. Take the topbox off and the mounting plate doubles up as a convenient pillion back rest. Other niceties include a decent sized screen to keep windblast at bay, handguards and 12v accessory socket.

What you have to be aware of with the XT is that it’s not a modern machine in the Japanese sense – where the chassis and its ancillaries are up to date(ish), the 1203cc (Buell Thunderstorm) engine is a basic air/oil-cooled Harley piece that shudders and pulls from low down with ease. Gear changes are slow but precise and top speed doesn’t move far past the 115mph zone. Its grey area is engine heat, cooking the rider in slow moving traffic.

As a touring machine the XT is surprisingly good in a straight line and through fast flowing twists. Considering the lowly performance it can make short work of getting across town or continent. When loaded with pillion and luggage, it reduces the amount of feel from the front end and leads to slower steering. Braking is best described as adequate.

Buell finish has always been questionable but most complaints have been aimed at the exhaust coating giving way to rust. Belt final drive isn’t a problem because it hardly wears, that and the fact it doesn’t need lubricating at all makes perfect sense for touring application.

Now Buell no longer officially exists within the UK has left many people cautious about second-hand examples. This isn’t a problem, though. All official Harley-Davidson dealerships are geared up for servicing and supply of spares and can be a good starting point for a bargain Buell.

+ points – comes with all prerequisites for touring.