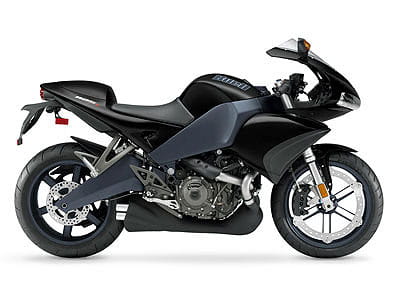 Buell’s 1125R had a harsh welcome to this world. The first ride by journalists basically panned it as an underdeveloped machine that might be a good alternative to the other big-bore sports V-twins with further development time (i.e. when it is finished). Six months later after the initial 2007 launch, a revised 1125R was placed once again in front of the journo-led firing squad and it was better…

The 1125cc engine is not a Buell-made item but a Rotax-made version made to Buell‘s specification. Even at the time of the bike’s eventual release in 2008, it still suffered from vibration. This vibration could materialise through the mid-range or at the top end of the tacho depending on what ECU mapping revision was installed – there were constant updates throughout the bike’s on-sale period.

Get over the vibration and iffy fuelling aggro and the engine was actually a respectable performer. 170mph and a claimed 145bhp were not to be sneezed at in 2008, and as Rotax had a good reputation from its early Aprilia Mille engines, the world looked to Buell to simply tidy up the engine management. But then Harley-Davidson closed its Buell division in 2009 and Buell mass production stopped with all existing stock sold off at bargain prices. Goodbye Buell and the 1125R.

Another problem for the then 1125R was its bulbous looks. It isn’t a good-looking bike but not a particularly ugly one either; it just didn’t fit in well with anything else available at the time and still doesn’t.

As far as handling goes, the 1125R wasn’t the polished performer seen elsewhere in the large capacity sports class. It understeers as standard and takes more time than you care to think about to dial-in the fully adjustable suspension. Buell’s own single rim-mounted front disc worked by a six-piston calliper worked ok, but proved to be susceptible to warping especially with circuit use.

To sum up the 1125R, we would have to say it’s not a bad bike but it’s nowhere near as good as the competition – pretty good reasons why, then, that everyone has just about forgotten about the Buell 1125R (owners being the exception). And that’s how it should remain…