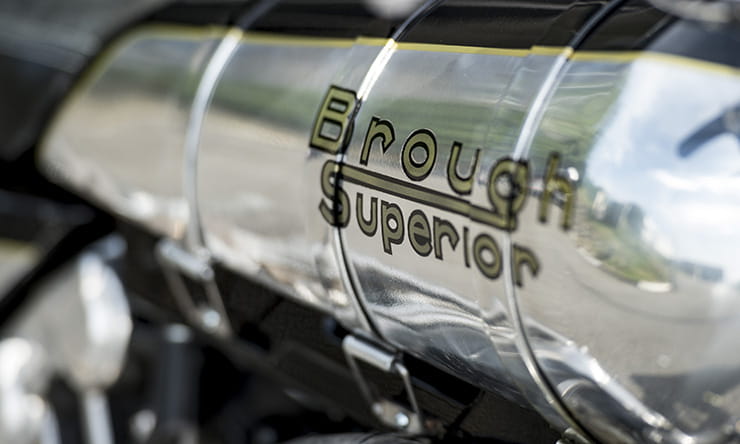 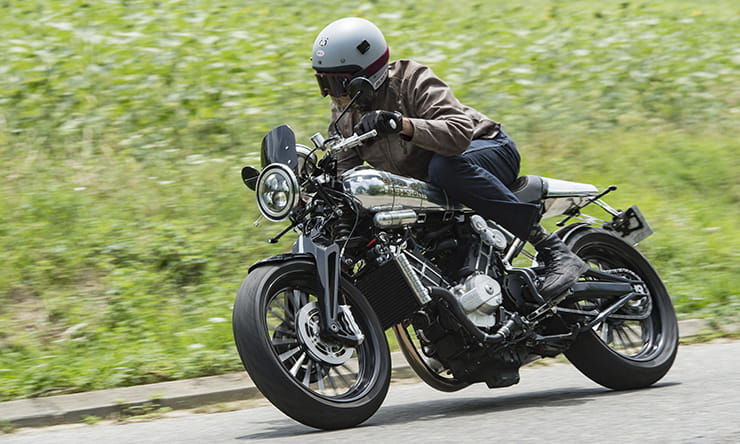 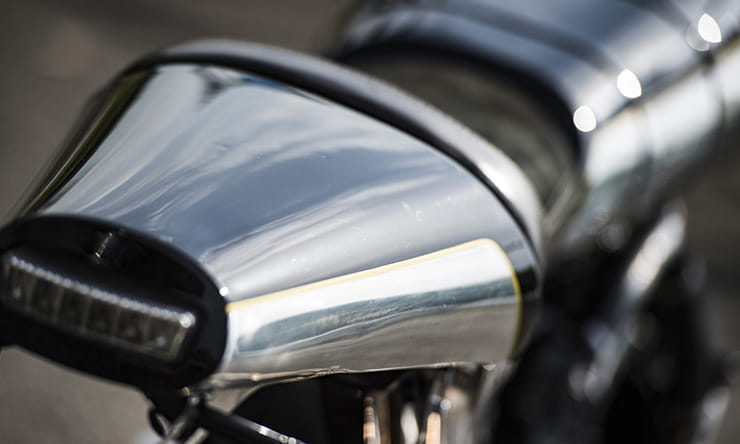 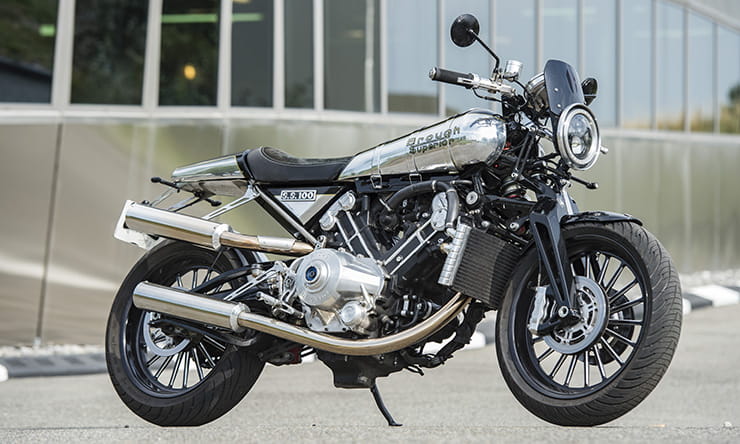 Seventy-six years after they ceased production, Brough Superior is back with an all-new titanium-framed 1000cc V-twin motorcycle that more than lives up to the legend of ‘ the Rolls-Royce of motorcycles’. We rode a prototype of the stunning new SS100 near the company's French factory last week.

Brough Superior – a legendary British brand now built in Toulouse, not Haydn Road, Nottingham when they ceased production in 1940, but don’t let that put you off. The name is owned by a mad Englishman called Mark Upham and under his ownership, IF a factory and the design team are the true soul of a motorcycle, then the new Brough Superior SS100 has more soul than almost any motorcycle I’ve ever tested.

Just getting on the bike evokes tales of speed runs at the Bonneville Salt Flats, and Lawrence of Arabia sat on his SS100, doffing his cap at passers by. We may be in France, on an industrial estate, but even the Brough Superior factory is special.

The factory is a chrome building near Toulouse that reaches out from an industrial estate in France like a chrome super yacht launching over crests of waves in the Med.

The building and the team behind the design of the new Brough are Boxer Design, famous for building their own Boxer and Voxan motorcycles. After being commissioned to design the new Brough SS100, owner Mark Upham was so impressed with their set-up they did a deal for the bikes to be built their too. The factory is now completely dedicated to Brough Superior.

Inside, the space is inspirational too, a big open plan building with a huge design studio upstairs where the pencils happen, while downstairs the metal action turns the vision into reality.

Brough’s Executive Director, Albert Castaigne explains the first batch of bikes, for delivery to the initial 10 customers, were being built as we got a tour of the factory. Each bike takes a day to build, with each of the hand-formed tanks taking a day to build too.

The workmanship in these bikes is of the highest quality. The engines ooze class, the detailing is infinite, right down to the aluminium switchgear, the way the radiator pipes are routed on the production bikes, those tanks which echo the old SS100, the seat units, and those four-disc Beringer brakes designed to look like drum brakes of old, not to mention glimpses of titanium peaking out near the sidepanels. Then there’s the front-end, it mimics the design ethics of systems like the one on the BMW K1200S, although Albert is keen to point out they actually had the set-up designed way before that, on one of their Boxer bikes in the Nineties. Essentially, the Fiori concept is designed to be incredibly stable in fast turns, yet nimble around town too. It’s mated to an Ohlins shock and is made from aluminium-magnesium alloy on the fork legs, with titanium for the triangular fork girders.

The bike we are riding is a test mule that has already done 50,000km and a lot of the finishes are early designs, for example the engine cases are cast rather than machined and there are a few wires hanging off where they won’t be on the finished production machines. Give or take a few finishes, and details like the radiator pipes not hidden behind cases like on the production bikes, not to mention bits like the key hanging off the side for practicality and ease of fitting to the prototype, this is representative of the Brough that you will be able to buy, if you have the necessary £45,000 of course. Most importantly, the prototype rides exactly the same as the final production units.

No matter how many times I’ve been handed the keys to prototype bikes, I’m always incredibly nervous. At list price these bikes are around £50,000 depending on exchange rates. In prototype form it’s hard to put a price on a piece of history.

But never have I been so chilled about it as when I’m handed the keys to the Brough-Superior prototype. “Be careful with the brakes”, says Brough boss Albert Castaigne as he jumps in our hire car with our ace photographer Gareth Harford, and I follow them off into the French countryside near the hills of Toulouse.

The motor sounds fierce, part Ducati, maybe, part angry war plane bouncing off the sunflower fields of southern France. One thing’s for sure though, it sounds mint. Just check the video if you don’t believe me.

Using an all-new 997cc motor designed by experienced WSB and MotoGP engine development engineers, Akira, the motor puts out 100bhp as standard. Though our prototype test bike also had the sport exhausts fitted which make it louder and with a remapped ECU and a different air filter give the bike 130bhp.

The kit is of course available aftermarket 'for track use only', and customers can spec their bikes with a myriad of options.

The power delivery is smooth, there’s very little snatch from the chain and the fuelling is spot-on. For a new engine, the set-up is impressive, make no doubt. It’s happy to chug around in a classic bike style, easy to ride in town, but make no mistake that this bike is fast. There’s nothing quite like it in terms of experience, but the nearest I could think is that the 88-degree V-twin motor feels a bit like a Ducati Sport Classic in terms of it’s power delivery, but with way more of everything. It is incredibly torquey and responsive. Every inch of throttle dials in way more power than I was expecting. Brough Superior always stood for sports bikes, and the name SS is of course Super Sport, but I wasn’t prepared for just how quick and entertaining the bike would be. The smile on my face after a blast into the countryside when I pull up next to Brough’s Albert, tells it all.

And while the bike may look long and classic, the titanium frame, and a claimed dry weight of 186kg and quick steering geometry means it feels sporty. The riding position is long and flat, the pegs are decently high, the tank is narrow where your knees fit, and there’s a big Smiths of London speedo and digital rev-counter right in front of you.

The whole design of this bike, from the Brough tank, to the detailing like the top yoke, twin fuel fillers, the headlight and the pipes, echoes the past but brings it right bang into the future yet keeps it simple at the same time.

It steers reasonably quickly and in fast long corners holds a line. It’s an unusual feeling at first but you can soon adapt and feel what the Michelin tyres are doing through the front-end. On a couple of bumps hit at speed it had a bit of a twitch from the front-end, but nothing major. The ride quality is plush and controlled thanks to Ohlins shocks front and rear and the suede seat is comfortable enough.

And yes, Albert was right about those brakes.

Cautious not to be the first person in the world to crash a priceless Brough Superior prototype I never really strung the bike out quickly, but rode it fast enough to be entertained. And those brakes?  The four 230mm discs are designed to give 20% more power than just a single 320mm disc while reducing inertia when changing direction. They’re fierce, and at first I was a little scared of them, but the more I rode it the more I loved the superbly over powerful nature of them and learned to brake with just one fingertip on the machined aluminium and adjustable brake lever.

The Brough Superior SS100 may be a brand new bike, from an old, yet in many ways, brand new motorcycle factory, but it rides as well as any modern motorcycle, yet gives that balance of old-fashioned style and class that many neo-classic marques fail to achieve. £50,000 (or so) is an awful lot of money, but this is a hand built small production scale motorcycle that you are unlikely to ever see another one on the road, in finished production form it is beautiful in its finish and design, and it works, every single piece of it works. I’d imagine it would never be worth less than what you paid for one. What price exclusivity? 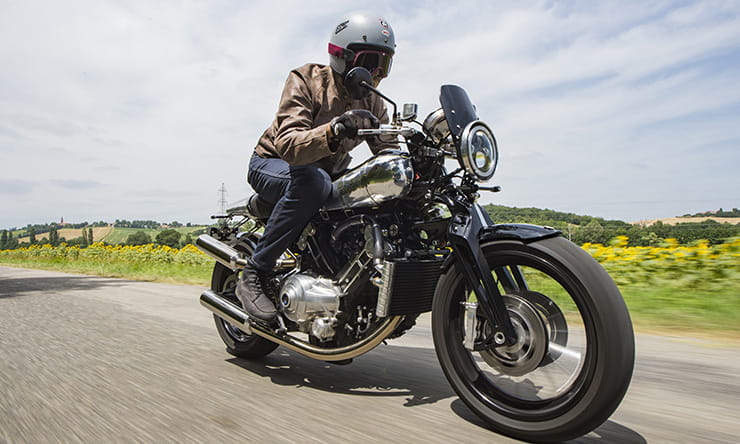 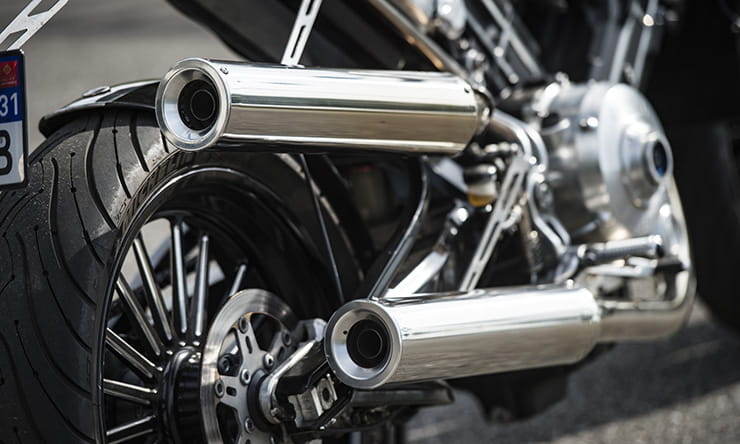 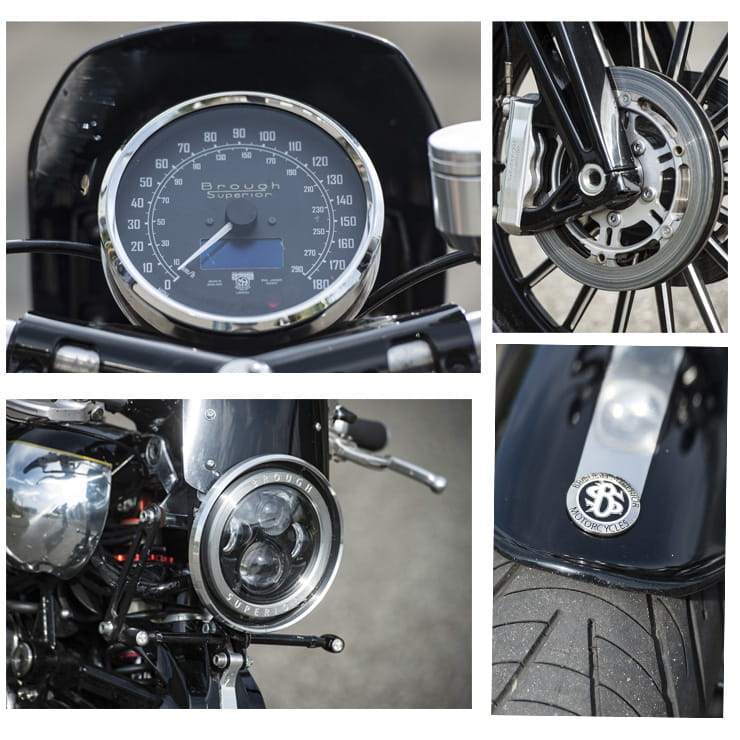