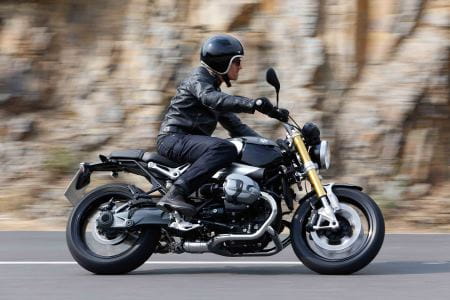 “It is not a retro bike, it is a modern bike with the spirit, emotion, purist simplicity and authenticity of a hand built motorcycle.” This claim by BMW may sound like a load of marketing waffle, but in the case of the wonderful R nineT it absolutely rings true. BMW’s latest retro offering not only looks absolutely drop dead gorgeous, it performs like a modern bike while feeling like a retro classic. In short, it’s brilliant.

When you stand and look at a nineT in the flesh it’s the attention to detail that impresses you the most. It’s the little things such as the BMW logo in the headlight, the stunning brushed aluminium tank sides, the minimal switchgear and the large analogue clocks. Personally I also like the fact that while BMW are selling a huge range of accessories for the bike (prices are yet to be announced) you can’t actually spec it up like most BMW models. With the nineT what you see is what you get, although heated grips can be retro fitted by your local dealer…

And this philosophy of tradition is what the bike is all about. It’s back to the grass roots of motorcycling with no traction control, no semi-active suspension, no power modes and no water-cooling. Definitely no water-cooling! Mention this to the nineT’s designers and they start waving their hands around in distress…although they have allowed ABS to be fitted.Fire up the air/oil-cooled boxer engine (taken from the old GS) and the nineT gently rocks from side to side as the crank spins. It’s not much of a rock as that went when the R1150 was updated into the R1200, but it is certainly there. Blip the throttle and you are rewarded by the bark of a flat boxer engine. It’s surprisingly noisy even on stock cans and sounds awesome with an open can. A good solid clunk (just like a retro bike should) and first gear engages and you are away. 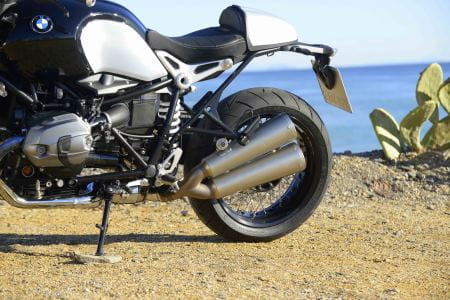 Riding a bike is a cool experience and the nineT makes you feel like David Beckham on one of his multi million pound specials – even though you may be more David Brent. Despite its small size, the nineT is comfortable as BMW haven’t fitted ridiculous clip-ons and although the seat unit is pretty minimal, it isn’t overly squeezed. But to be honest when you ride the nineT, you aren’t thinking about the comfort levels, you are simply enjoying the experience.

At low speed the nineT feels like a slightly sportier R1200R, however when the pace ups this modern retro comes alive. Get that boxer spinning and the nineT is a hoot. The modern side of the design comes out and with its S1000RR-derived forks (non-adjustable) rather than a BMW Telelever front end giving loads of feedback you can go absolutely crackers on this retro. Aim it at a set of bends and the nineT fires through with the kind of poise and braking you would expect from a modern sports naked, however this one looks a million times better while it is scraping its pegs in true Joe Bar fashion. You can’t help but smile and very quickly the joy of riding a pure bike comes rushing back. Traction control? Who needs it? I’d rather bang up second gear wheelies. Fuel modes? I’ve got my right wrist thanks. Semi-active suspension? No thanks, I’ll stick with a nicely set-up pair of forks. Radial brakes, oh go on then, just so I can really nail this thing into bends… 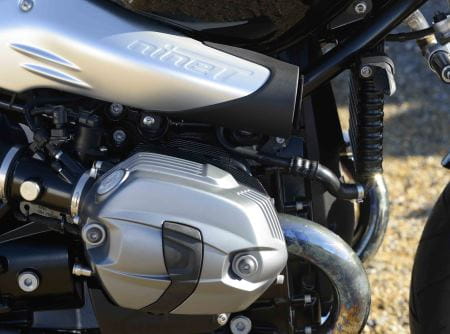 Every now and then a bike comes out that hits the bullseye - the R nineT is one of those bikes. When you chat to its designers you get a real feel for their passion and love of the spirit that helped create this bike. It’s no ‘fake’ modern retro, this is the real deal. A bike that feels as good to ride as it look parked up outside a pub. If the whole customisation side doesn’t kick off (although I am sure it will) the nineT will remain a great looking bike and a machine that will be a ‘keeper’. Where owners will update their GS every few years, I can’t see the used nineT market being very big at all as there is no reason to update or even sell the bike. In contrast the new market is going bonkers for the nineT at the moment and it is currently sold out all over the world. If you are one of the lucky few who have booked their bike you have a fantastic summer ahead. If you haven’t then you need to get to the back of a rapidly increasing line of eager buyers…

Compare our Multi Bike insurance policies. Or, to comment on this article  or !