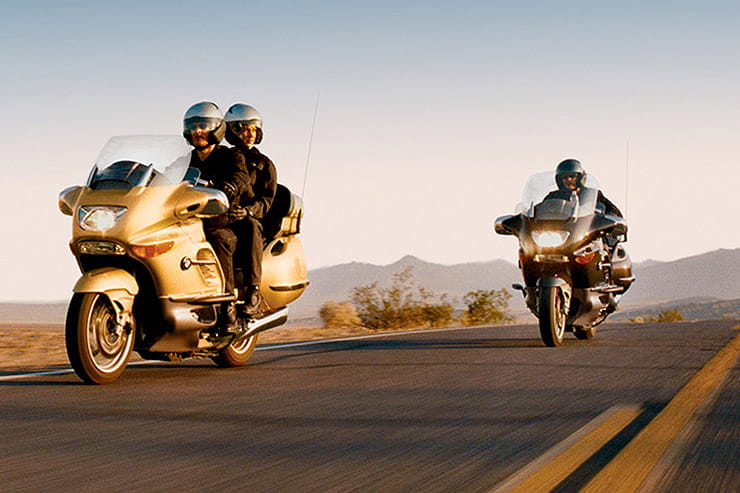 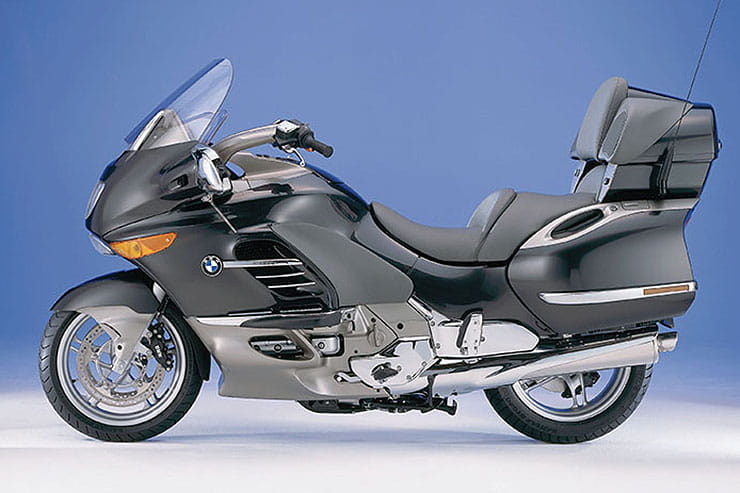 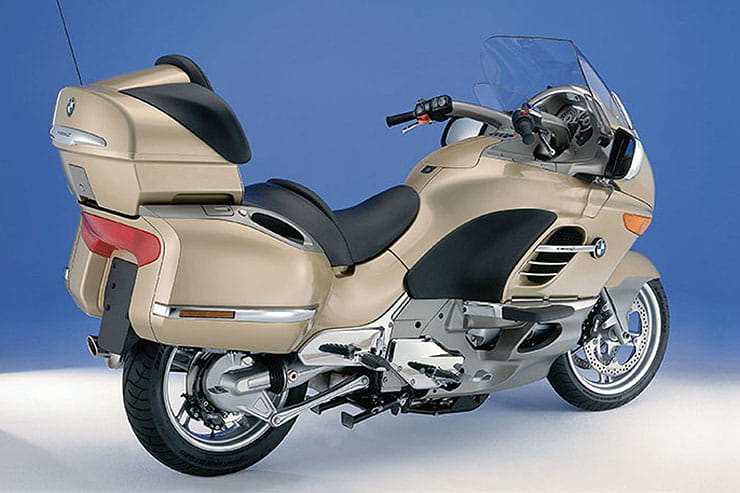 When it came to luxury touring in the early 2000s, one bike dominated the scene – the BMW K1200LT. The full-loaded LT appealed to those who saw the BMW logo on the tank as a guarantee of reliability and while not quite as agile as a Honda Pan European, it offered more in the way of technology and creature comforts and was far cheaper than a Honda Gold Wing. Although initially launched in 1999, it was the 2004-onwards updated model that really set the benchmark and went on to become one of those bikes that owners rave about. If you want to embark on a serious bit of touring without breaking the bank when it comes to your choice of transport, the K1200LT is well worth considering.

The odd thing about the K1200LT is that despite their popularity they tend not to crop up that much in the used bike market, mainly because their owners don’t feel the need to sell them! The first generation (1999-2003) is far easier to find (and will cost you roughly £3000-£4000) but if you want the updated bike you will need to be patient. Expect to have roughly £4000 on hand for an early bike with later ones going for close to £6000 if they are in reasonable condition, which is a lot of cash but as BMW didn’t make a replacement (the boxer-powered RT became their main tourer until the K1600 arrived) the K1200LT holds its value well in the used bike market. The higher-spec LE and Lux models command a premium due to their added extras and are worth waiting out for if you are in no rush to buy.

The K1200LT uses BMW’s inline four motor (which doesn’t run across the frame, BMW put it longitudinally on the early generation of K-series bikes) and the 1171cc motor was redesigned for the 2004 update. While the 15% increase in power is nice to have, it is the 88ftlb of torque at just 5250rpm that makes the LT so relaxing to ride. Super-smooth and with bags of grunt, it suits the bike’s nature perfectly and motorway miles are seen off with minimal hassles and no nasty vibrations. It’s lazy, economical and reliable, what’s not to like? Well, there is the gearbox...

One of the few grumbles that owners have with the LT is the fact it only has five gears, which is a bit annoying on a bike that spends a lot of its time on straight roads as you often end up looking for an overdrive. That said, it isn’t too bad at ‘normal’ motorway speeds. When buying used always be very wary of any clutch slip as that’s a bill of approaching £1000 to get sorted and look for a machine with a good service history as once things start to go wrong the bills can add up very quickly indeed. Service intervals are every 6000 miles with the valve clearance check at 12,000 miles, which adds to the bill. A few owners service the bike themselves however the sheer volume of plastics does make this a bit time consuming and frustrating until you know what you are doing and there is always the danger of broken panels due to forcing them in frustration. When buying used, attempt to peek behind the plastics using a torch to look for hidden issues such as corrosion. 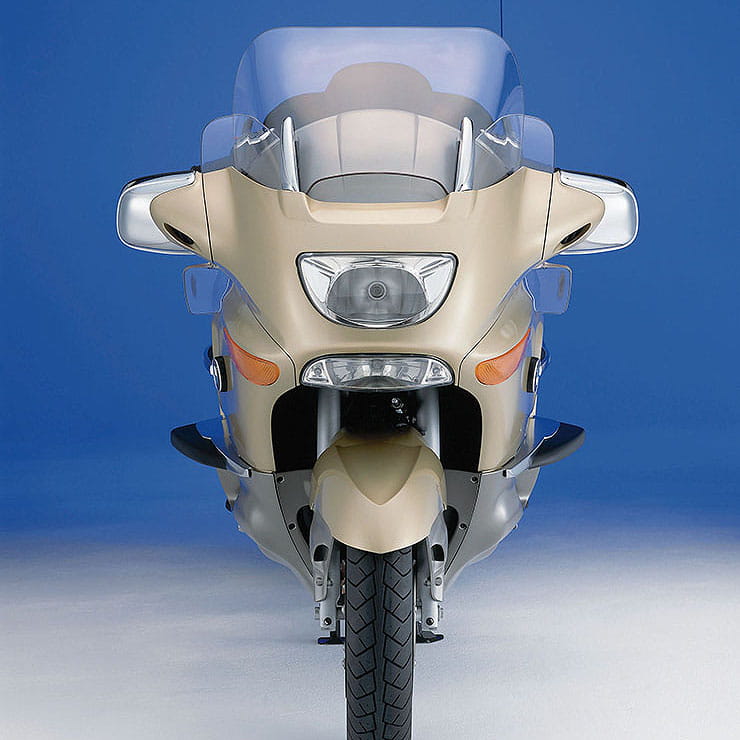 BMW claimed the LT could average between 55 and 41mpg depending on the speed and owners seem to back this up with low 50s economy figures very common. Thanks to its big 23.4-litre tank, you can reasonably expect to exceed 200 and even approach 250 miles between fill-ups, which is great news for touring.

Tipping the scales at 387kg before adding a pillion or luggage, there is no disguising the LT is a big old bus. At slow speed it can feel a bit of a handful (the low 770/790mm seat height is very useful for getting both feet flat on the floor for extra reassurance and BMW helpfully integrated crash protection into the panniers and around the motor) however once you get moving this feeling is transformed into one of security. Roll the LT into bends and it is totally unflappable thanks to its ‘funny’ Telelever front end, which gives a real feeling of security, little dive under braking and solid road holding. At speed on motorways there is no hint of instability and you can happily sit at 70mph all day long in total confidence. A few owners complain the suspension is set quite softly (the rear has a remote preload adjuster) but by now this is probably more down to the units nearing the end of their life, so factor in replacement shocks if you desire a sportier ride quality. As on any shaft drive, check the hub for any leaks or nasty noises but they are generally solid and the same goes for the Telelever’s bearings.

BMW’s EVO ABS system was standard fitment on the LT and while a good system (considering its age) if it goes wrong the bill can be fairly terrifying, so always be very wary of any ABS warning lights. The weight of the LT means that warped discs seems a common thread on forums, so check all is well, and also ensure the wheel bearings aren’t grumbling. 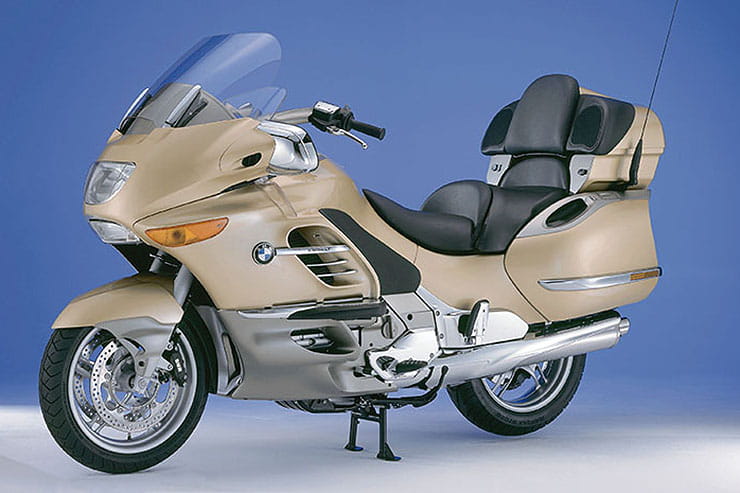 LT stands for Luxury Touring and that’s exactly what the BMW delivers. The huge fairing is very protective (it even has wind deflectors) and the screen (which is electronically adjustable) is also extremely effective while both the rider and pillion seats are akin to armchairs. There is a total of 70-litres of lockable storage in the panniers and another 50-litres in the top-box as well as a lockable compartment on the tank cover, which is very handy for putting a phone or change for tolls etc. As well as the rider’s seat being height-adjustable, the pillion backrest can also be altered in its height.

While ABS came as standard on the LT, it is the electrohydraulic main stand that most riders fall in love with. Even fully-laden with a rider, luggage and pillion, a push of the button and an electric pump builds up hydraulic pressure to lift the bike onto its centre stand. It is as fantastic as it sounds - unless it goes wrong, so check it is working as parts are expensive. The LT also gets a reverse gear, which is brilliant, alongside an electric screen, two power sockets and a sound system. Central locking was an optional extra as was heated grips, cruise control and a drink can holder... Most owners don’t feel the need to add much more aside from possibly a taller screen, however the headlights do come in for some criticism and so uprated systems are a fairly common addition. Always check all electronic systems work as servo motors can fail and wiring corrode over time.

The K1200LT is a truly great bike when it comes to touring. Lighter than a Wing and less intimidating as a result, you can take one on a serious tour and never find yourself wishing for more in terms of creature comforts. It’s a shame they are fairly hard to locate in the used market, however that is testament as to how good they are as owners simply refuse to part with them! A bike to keep an eye out for and move quickly on when a good one appears for sale.

Three things we love about the K1200LT… 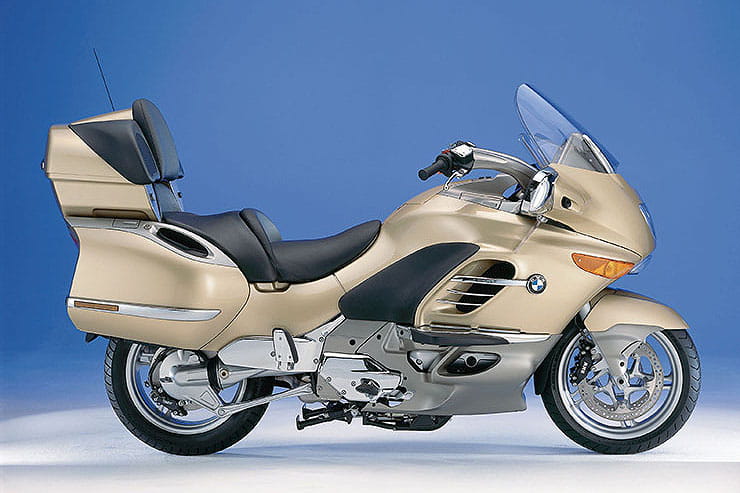