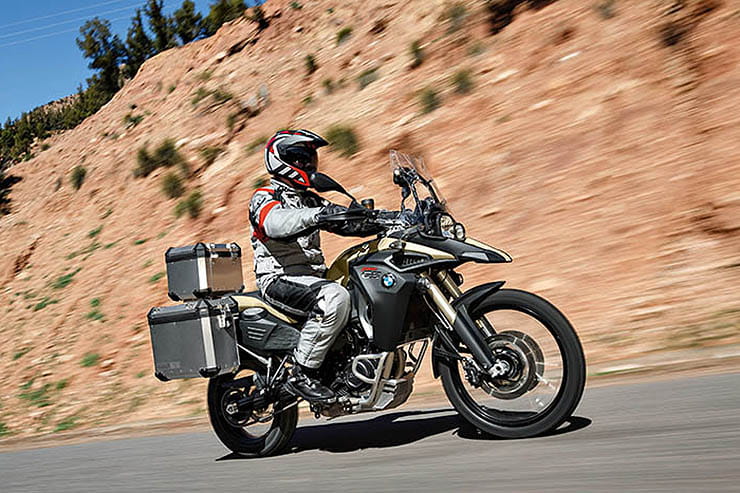 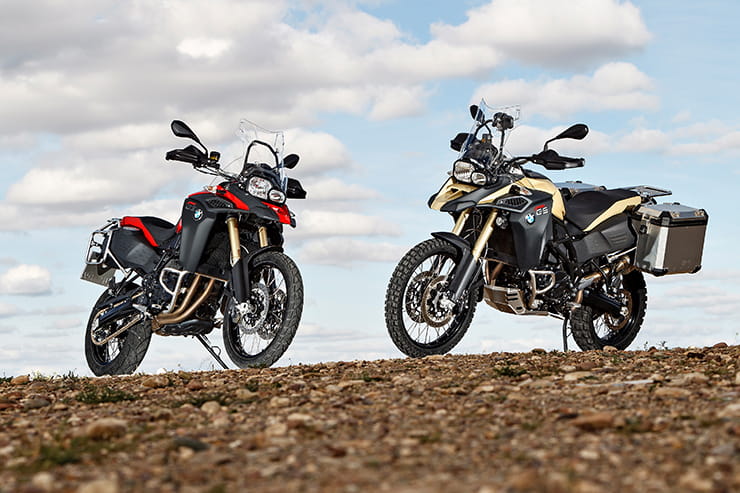 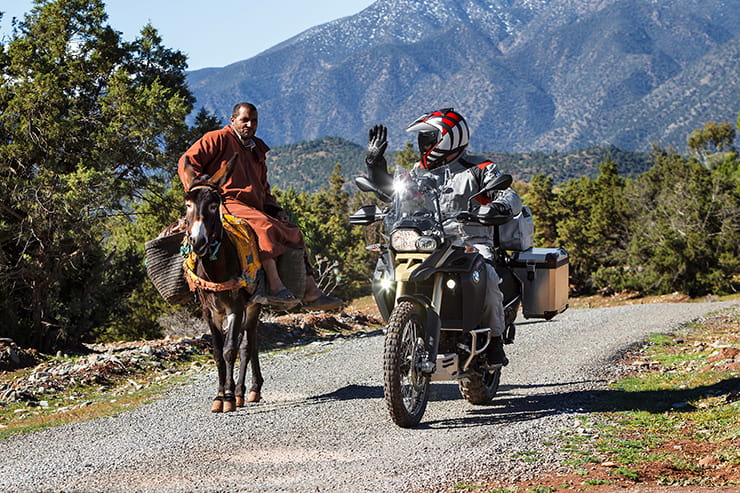 Somewhat surprisingly, it took BMW 22 years from the first GS being released in 1980 to them creating an Adventure model in 2002. Thankfully, when it came to their smaller capacity parallel-twin model range the delay was far less and the F800GS Adventure joined the F800GS in the firm’s model range in 2013, just five years after the F800GS first appeared and a few months after the F800GS was updated. So what did the Adventure bring to the party? Taking the F800GS as a base, the Adventure upped its touring and off-road capabilities through a larger petrol tank, reinforced subframe, extra Enduro traction control mode, revised suspension, spoke wheels, a bigger bench seat, crash protection and a larger screen. More rugged and arguably better looking than the stock GS, the Adventure makes for a brilliant do-it-all machine that unlike its bigger R1200GS Adventure sibling doesn’t feel unwieldy at low speed due to its increased fuel capacity. With a long list of accessories and good reputation for reliability, the F800GS Adventure is well worth considering as a solid touring bike that can commute, venture off-road and take you over to Europe (or even further afield if you wish...) for a proper adventure that can most certainly include a few trails along the way.

In 2013 the Adventure model cost £9650, which was just £800 more than the stock F800GS and represented good value for money if you were in the market for a middleweight adventure bike. Nowadays where a stock 2013 GS is roughly £6000 the Adventure will set you back about £500 more. As with all BMW models, however, this price is very much dependent on spec and as Adventure models often come with hard luggage fitted (BMW sold a ‘Launch Pack’ with this option at a reduced cost) and more option boxes ticked you need to take this into account. The updated 2016 F800GS models start at around £7000 for the stock GS or £8000 for the Adventure version but again, this is very dependent on spec. The top-end for the Adventure is the 2018 model, which costs in the region of £9000 and is the last version before it became the F850GS Adventure in 2019, a year after the F850GS was released.

The F800GS makes a respectable 85bhp (63kW) with 61.3lb-ft (83Nm) of torque, which is more than enough for most road riders. A low revving and gutsy engine, it is pleasant to use but not exactly thrilling. Is this a problem? Not really on a bike such as the GS because it makes it very friendly in town and also manageable off-road where you need easy and fluid power delivery.

The F-series motor is very strong in terms of reliability and not that many owners report issues aside from the occasional sensor failing (also watch out for the immobiliser playing up), which isn’t uncommon on older models. There are a few threads on forums involving the paint finish on the motor and fasteners corroding but liberal use of anti-corrosion spray prevents the worst of the furry stuff setting in and a fender extender helps protect the motor’s paint. The gearbox is robust and the exhaust is also pretty solid, so when buying used you are fairly safe. The service intervals are every 6000 miles with prices roughly £200 for a small and £400 for the major, which includes the valve clearances at every 12,000 miles. If you are just doing the annual service, it’s closer to £150 and is very easy to do at home as the motor is nice and accessible. 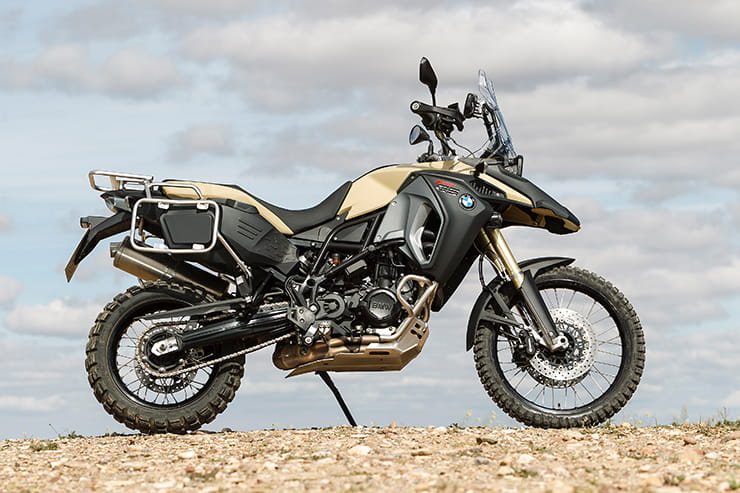 BMW claimed the Adventure could manage anything from 50mpg to 65mpg, which is what owners find and an average of 60mpg seems realistic. Thanks to its bigger 24-litre tank, this equates to a range of close to 250 miles before you run dry, which is excellent for a middleweight adventure bike.

The biggest difference between the stock GS and the Adventure is the fact the Adv come with a 24-litre fuel tank where the base bike has a 16-litre item. The more rugged bike also has spoke wheels (21-inch front, 17-inch rear), a reinforced subframe (hopefully this hasn’t been tested), crash protection, a 10mm taller seat height (up to 890mm from 880mm) and enduro pegs with rubber inserts. The rest of the bike, so that’s the frame, forks (bar settings), engine, are all the same as the GS. On the road the slightly stiffer shock settings cope well with the added weight of the extra fuel and the GS doesn’t feel back end heavy, which is impressive. As normal with a skinny 21-inch front wheel the feeling from the front end is a bit odd but that’s par for the course on an adventure bike and it still turns well. When buying used watch out for rusty or broken spokes and buckled wheels, which can happen if the bike is taken off-road. Owners report bearings (wheels and headstock) don’t last long, so give everything a good wobble (easier if it has the accessory centre stand fitted) to be sure. Changing them is fairly cheap but it is a pain.

With ABS as standard the two two-piston stoppers are acceptable in their performance on the road and more than strong enough for off-road use. Unlike on so many modern adventure bikes, you can actually totally disable the ABS for off-road use, which is good, or add Enduro mode to the ASC and have basic off-road ABS and ASC. There isn’t much to worry about here when buying used as the calipers are simple to rebuild however always check the brake fluid is nice and clean as contamination can cause issues with the ABS pump and that’s an expensive item to get fixed. Ideally the fluid should be changed every two years, so look in the service book to see when it was last done. 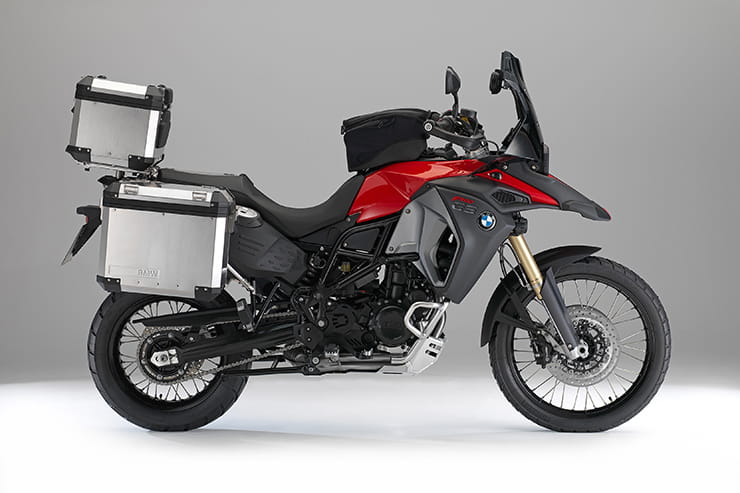 The Adventure was designed as the mile-muncher of the two F800GS models and it gets more wind protection than the base bike through a taller screen and bigger seat, both of which are impressively effective in their jobs, meaning you can actually test the 250-mile tank range. A comfortable bike for a solo rider and not bad for pillions either, by ticking a few of the optional extra boxes you can make it even better with panniers, heated grips etc upping the comfort levels. As you would expect, if the 890mm seat is too tall for you there is a low option and also extra wind deflectors to improve the weather protection levels.

The Adventure comes with ABS as standard, but you have the option of adding ASC (traction control) as well as ESA, which is on the shock only. It isn’t semi-active but instead varies the rebound damping to one of three settings – Comfort, Normal or Sport – while the preload is manually adjustable. A bit of a mixed blessing, ESA is good to have but if it fails the shock isn’t technically rebuildable (some companies can rebuild them with varying degrees of success) and that means spending about £1000 on a new unit, chancing a used one or swapping it out for a non-electronic shock and putting up with the error code. If you get ASC, the Adventure has an extra optional Enduro mode for off-road use which works alongside the ABS to be better suited to the dirt. Other BMW option boxes that are well worth searching out on a bike are the centre stand, heated grips, uprated onboard computer and luggage options. In 2013 BMW sold the Adv in ‘Travel’ guise with ASC, heated grips, LED auxiliary lights, a centre stand and the BMW on-board computer for £10,535 or in a special ‘Launch pack’ that cost £1,637.63 and included aluminium panniers, a top case and the new Adventure GPS. When the F800GS was updated in 2017 it gained a ride-by-wire throttle, which added four power modes (Rain, Road, Enduro and Enduro Pro), which to be honest aren’t worth having. There are also lots of aftermarket accessories for the F800GS models, so you aren’t lacking in options and items such as fender extenders and crash protection are popular.

If you are considering a middleweight adventure bike, the F800GS Adventure is worth a second look. The bigger tank means it can go the distance and it also looks more rugged than the base F800GS model. It’s not cheap but it is reliable, economical and packed with good accessories that will help you cover the miles.

Three things we love about the F800GS… 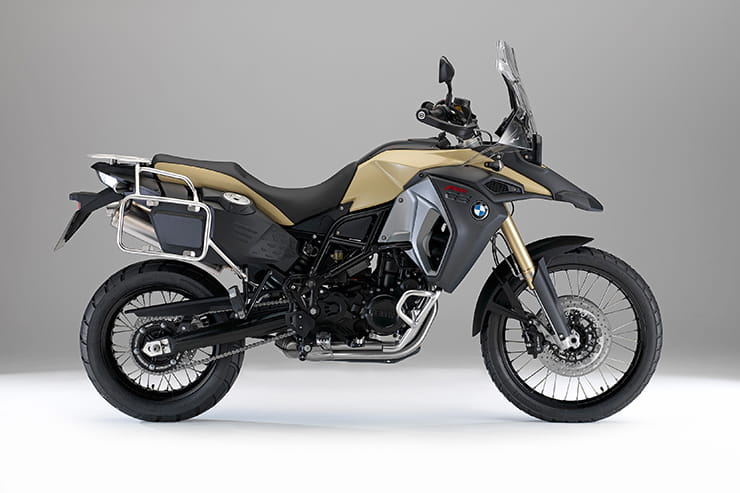 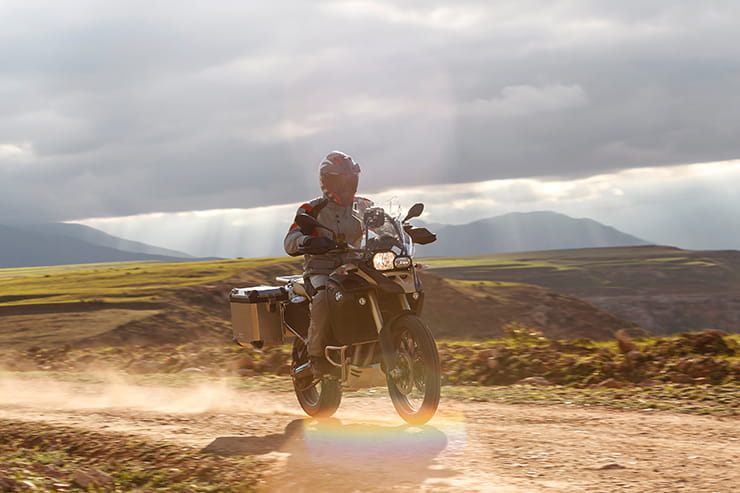