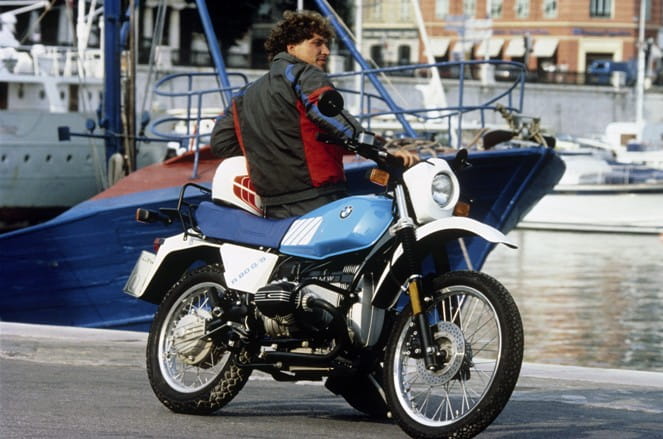 The R80 G/S is a bike that truly changed the motorcycle world. Not only did it single handedly create a whole new genre of motorcycle, it formed the bedrock that helped a struggling BMW Motorrad through a very tough period in its history and even won a few Paris-Dakar Rallys in the process. Not bad for a bike that was only ever meant to be a stop-gap model…

The history of the G/S is a slightly confused one, but most agree that the bike’s father was BMW test engineer Laszlo Peres. A keen off-road rider, Peres built himself an 800cc boxer-engined off-road bike in the early 1960s to compete in various events in Germany. After a degree of success, other riders started to ask if they could also have such a machine and in 1964 early G/S prototypes were spotted running in the German Off-road Championship. However BMW Motorrad was far more interested in road bikes such as the R90S and the project was shelved until the late 1970s when BMW Motorrad was in danger of going out of business.

With the top brass describing Motorrad as ‘almost dead in the water’, a new management team took over in an attempt to rescue the company. Diagnosing that the firm’s two-valve boxer was never going to provide serious competition to the high tech Japanese bikes, they set about developing the K-series of inline fours with an eye to creating a fresh and exciting new family of bikes. However with a four-year development period, BMW Motorrad needed a quick fix to boost sales so they had a look about the factory to see what they could rapidly put into production as a new model. They discovered something interesting in the R&D department. Despite the project being officially shelved, some BMW engineers had continued to develop the G/S and when Karl Heinz Gerlinger, BMW’s new head of sales and marketing, paid a visit to the R&D department he found the answer to BMW’s problems. Not only was the G/S an almost production ready bike, it came with an already established sporting pedigree thanks to Peres and even some brand new technology. BMW’s prayers had been answered and the R80 G/S – which stood for Gelande/Straße (off-road/road in German) – was launched at the Cologne Motorcycle Show at the end of 1979. It was an almost instant success.

Sold under the slogan “Sports machine, touring machine, enduro…Welcome to a motorcycle concept with more than one string to its bow” the G/S was anything but the cumbersome tourer most had come to expect from BMW. Weighing just 167kg it was over 30kg lighter than the R80/7 model and yet promised equal levels of practicality, a huge 19.3-litre fuel tank and even came with a revolutionary monolever swingarm that combined a maintenance-free shaft drive into a cool looking single sided swingarm. Riders went nuts for this new bike and in 1981 BMW sold 6631 G/S models, twice the number the factory has estimated and one in five BMWs sold that year were the G/S model. The same year a G/S won the Dakar, prompting BMW to make a Dakar replica, and by the time the R80 G/S was superceded by the R100GS (note the lack of / in the title) it had sold 21,864 units and become a cornerstone of BMW Motorrad’s model range – a place it still occupies. In fact, to date BMW have sold over half a million GS models. 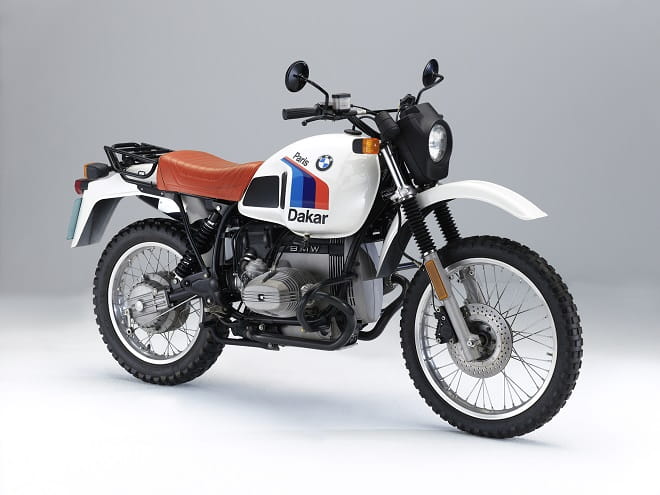 Such is the popularity of the GS brand that you are simply never going to lose money if you invest it in an early model. Ideally you will snap up an R80G/S Dakar, but these are very rare as only 3000 were built. Any R80 G/S model is well worth investing in and even if it is a bit tatty, that is easily chalked down to character. Getting spares for any older BMW model is easy, however plastic items can prove a bit of a headache. If you are on a tighter budget, or have an eye to the future, consider the R100GS (which also has a Dakar rep) and was the last GS to have forks instead of the Telelever front end.