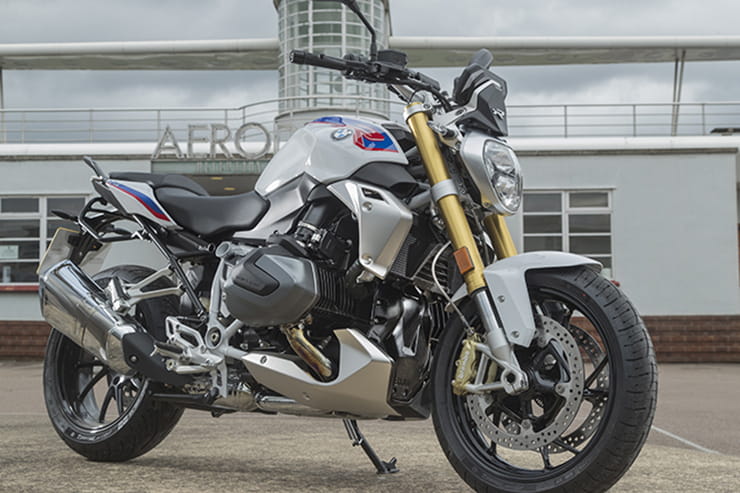 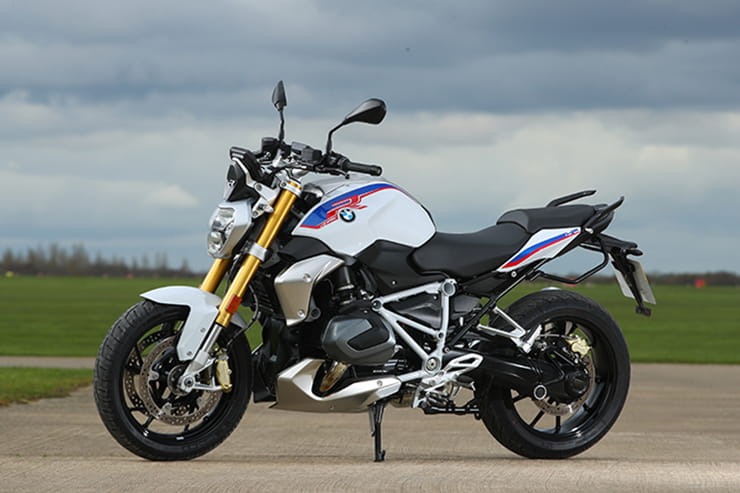 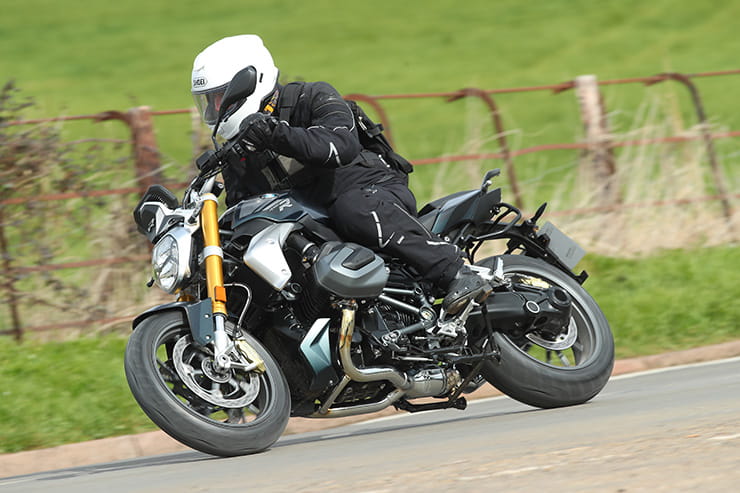 There’s a lot to love about the idea of a supernaked. The mental image of wrestling an enormous, overpowered, mentally unhinged motorbike; struggling to keep the front wheel on the ground. Only you, the heroic ‘Gerald-of-Timpsons’, shoe repairer and key cutter to the masses of Droitwich can tame the beast etc. It’s a compelling reason to sign on the dotted line. A bit like the supermoto thing many of us fell for a few years back.

Sadly the reality can be different. Without a fairing you don’t get beyond three figures for long before physics kicks wind in your face, and it takes about 500 miles before you start admitting that maybe, just maybe you didn’t really need 75 extra bhp on top of the Bandit 1200 you part-exed.

What you (me, certainly) would actually enjoy owning long term is, what can only be described in 2019’s horsepower terms as a mediocre-naked. Thankfully, BMW’s R1250R is a long way from being mediocre. Judged by the numbers a KTM Super Duke might make 50 per cent more power, but what’s the point if you never use it? You wouldn’t buy trousers with 50 per cent more legs just because your sad male ego swallowed the marketing spiel that three legs makes you walk faster. Having the extra material doesn’t make you grow the extra limb in the same way that buying the extra horsepower doesn’t turn you into a more talented rider. Sorry…rant over, tell us about the bike Rosie.

BMW’s 2019 R1250R makes as much power as a 1998 Yamaha YZF-R1, but at lower revs and in much bigger blats. There’s enough torque to humiliate most Ducatis, the very latest electronic safety aids, a fancy TFT dashboard and a price tag below most of the competition (although, BMW’s own, more-powerful S1000R is slightly cheaper).

You could simply describe it as a roadgoing version of the R1250GS but that wouldn’t be doing it justice. The R1250R is almost certainly better than that. 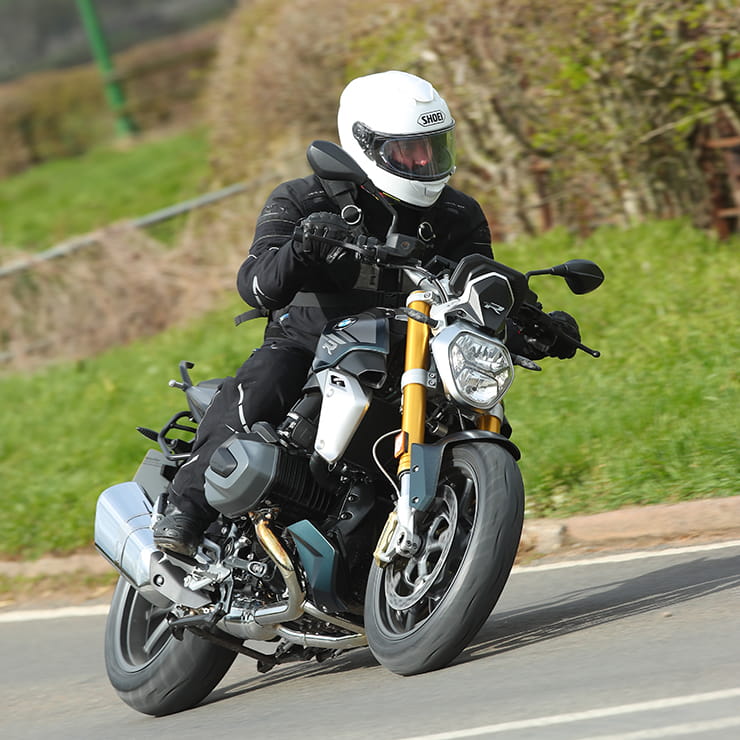 BMW has a PCP deal that costs £153 per month over three years with a £2000 deposit. Bear in mind though that no one leaves a BMW dealer without signing up for heated grips, pannier mounts and almost always at least £1000 of extras. Even the cat at our local dealer is prepped for sat-nav. 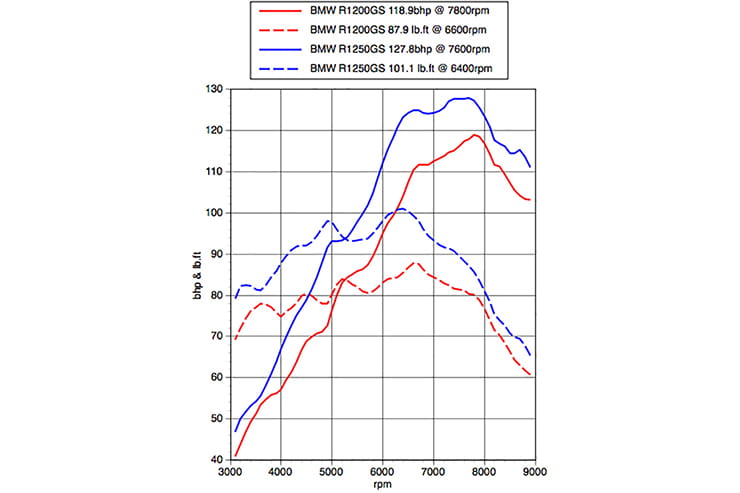 136bhp and 106lb-ft torque are impressive figures, but it’s the way that performance is delivered that you remember. How an engine feels is determined as much by the riding mode selected as the engineering these days. All the metallurgists have to do is allow the parts to move as quickly as possible – it’s the electronics boffins who determine how fast that happens. In the sharpest mode (Dynamic) this engine swaps tickover for rev limiter so quickly it’s hard to believe there are two pint-and-a-bit-displacing pistons slugging it out downstairs.

The performance is so flexible that BMW could have easily lost another few kg of mass by removing all the other gears apart from third because once moving you can ride pretty much any road at any pace and never need another ratio. 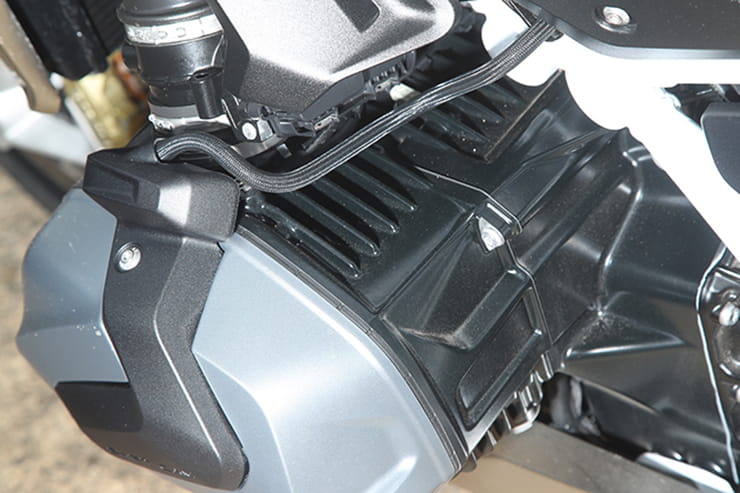 This is where the magic happens. ShiftCam is a simple-but-effective system

The R1250R uses the same ShiftCam engine as the R1250GS. ShiftCam is BMW’s version of variable valve timing that runs two switchable profiles on the inlet cam. One of them is the smooth and torquey low-speed running nice-guy (let’s call it Barry), while the other (let’s call it ‘Wam-Bam-thank-you-cam’), comes in at 5000rpm (or less when you open the throttle sharply) is a more aggressive, lumpier profile, allowing more gas flow and power.

In use you never feel the switch between Barry and Wam-Bam, but you are very aware how easy it is to bimble around at very low speeds with no transmission snatch or lumpy running in the same way as you are impressed with how hard this motor revs at the top end and how easy it is to get everything out of it.

BMW’s flat-twin feels very different to a vee. It thrums rather than throbs, making a completely different noise and feeling almost like it has some extra ‘mini-pistons’ filling in the gaps between power pulses. What’s changed in the last few years is that the personality has evolved from relaxing-country-gent into angry-man-in-a-hurry as the big-twin got revvier and more sporty.

The gearchange is light, as is the feel at the clutch lever. Some of the launch bikes had BMW’s latest quickshifter (Gearshift-Pro) fitted. When it works it’s lovely, but occasionally it doesn’t, needing a lot of pressure on the lever and a frustrating clunk in return, making you feel like a clumsy chump that doesn’t deserve such a lovely motorcycle. In the end I gave up and just used the clutch because the standard gearchange experience is almost perfect.

And I’d completely forgotten about the shaft drive till I changed down too early and felt the lack of ‘slack-lash’ (a technical term) compared to a chain. BMW’s shaft drive is the best on the market…by miles. It smooths out the big twin lumpiness at low revs and doesn’t affect the handling.

Our launch ride wasn’t all that long and, like all launches is punctuated by photo sessions, which are about as un-natural as riding can get. When BikeSocial did some big miles on an R1250GS last year (same engine, bit more weight, but also more aerodynamic) we averaged 42.8mpg against 44.1 for the older R1200GS we also had on test. 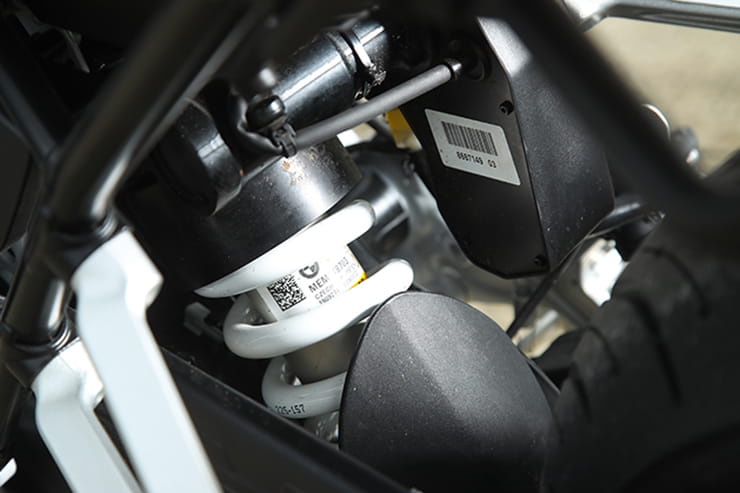 The chassis and suspension is essentially the same as the 2018 R1200R, which is a good idea because that bike handled superbly. For some reason, this one didn’t. It was harder to steer and more clumsy in the corners, like there was a disconnection between front and rear ends meaning it needed a couple of goes at steering through a turn. It felt like the rear tyre pressure was low (it wasn’t) and swapping to a different bike showed the same characteristic.

The bikes were all fitted with BMW’s ESA electronic suspension, which adjusts the damping automatically according to the riding mode you have selected. This felt more like a preload issue than a damping one – as if the bike was sitting too low at the back. If it were my bike I’d have read the manual, sussed out the adjustment and tried some different settings. On the launch I never got the chance and, as we were riding in temperatures just above zero on salt-strewn, very slippy roads, I didn’t want to make things worse. When the weather improves we’ll get another test bike, spend some time with the system and update this review. 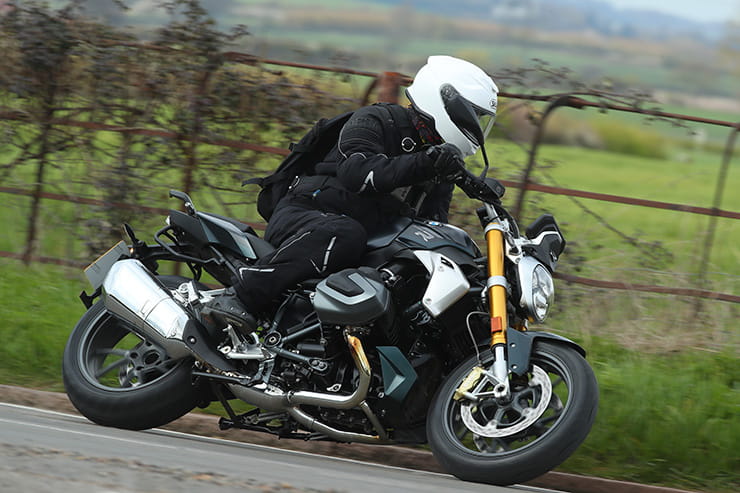 Standard and Exclusive models have a slightly lower seat than the Sport model, which, oddly makes them feel more cramped and sporty. Go figure…

The seat is firm, but supportive and very, very comfortable. It feels low, but at 820mm isn’t actually much shorter than most sports bikes. A lower option (760mm) is available and the R1250R Sport’s perch is 840mm. Footpegs are higher than you expect on a BMW roadster with the standard seat. Not cramped, but definitely high and they feel more natural on the Sport version’s higher seat.

The rest of the riding position feels very natural and, even without a screen, there is some windblast protection from the TFT dash binnacle. The indicator switch is just a little too far to the right. It’s only a small thing, but it gets annoying very quickly. Back in the 90s, BMW indicators used to be one of those things that every journo felt compelled to comment on. It feels weird to be talking about them again. 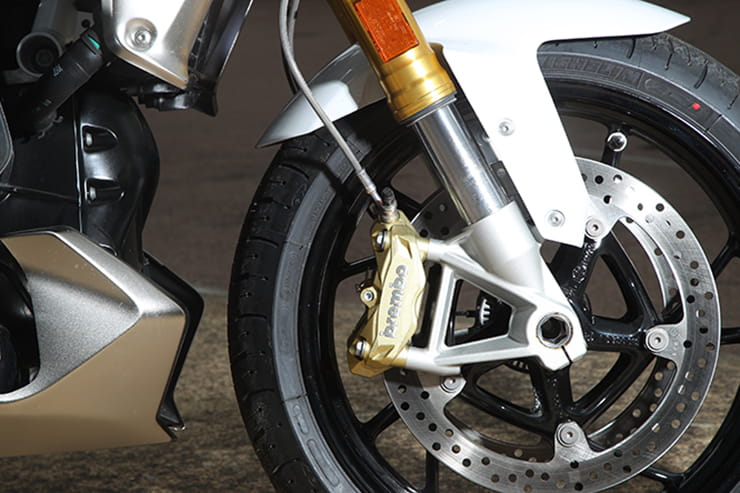 R1250R retains the Brembo calipers on its conventional forks from last year. The Telelever-equipped RT and GS bikes have American-built Hayes calipers

The 2019 R1250GS and RT models have BMW-branded calipers made by American supplier Hayes. The R1250R retains the Brembo units used on the 2018 model. There’s a huge amount of power and, depending on the riding mode (which on the ESA bikes also controls ABS levels and suspension travel) a huge amount of control too. Even on the softer suspension settings there’s plenty of control although the ABS comes in sooner. Balance between front and rear is excellent and the back brake gives plenty of feel for added control through wet roundabouts or filtering.

Cornering ABS is optional and worth the money for the one time in a million moments when you need it. We’d certainly take it before the quickshifter and ESA. 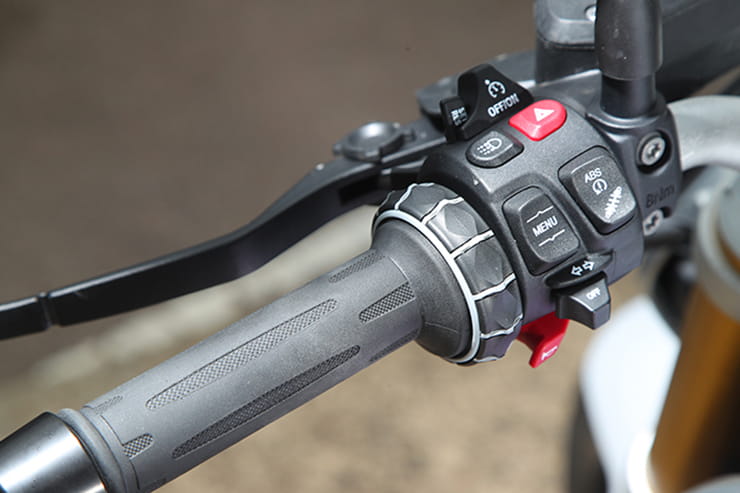 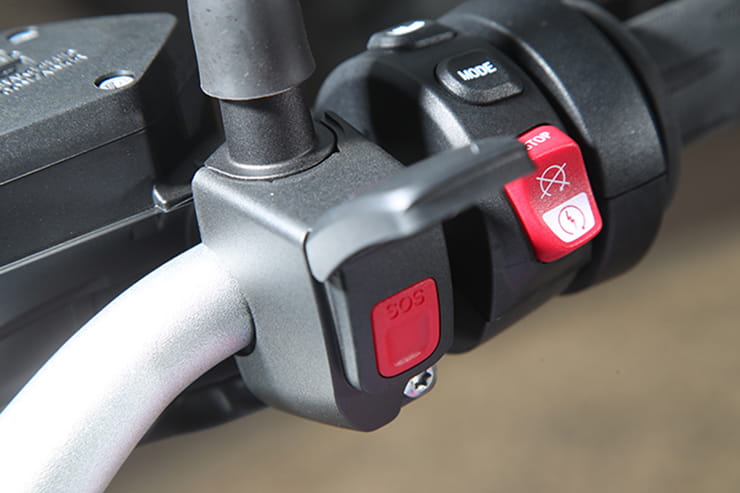 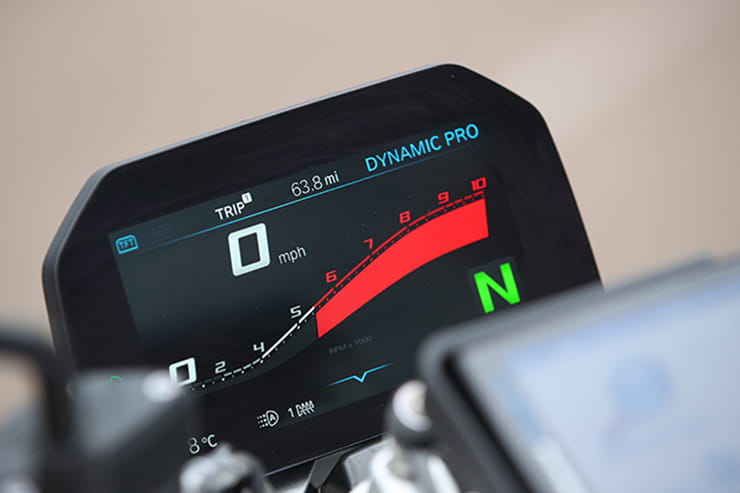 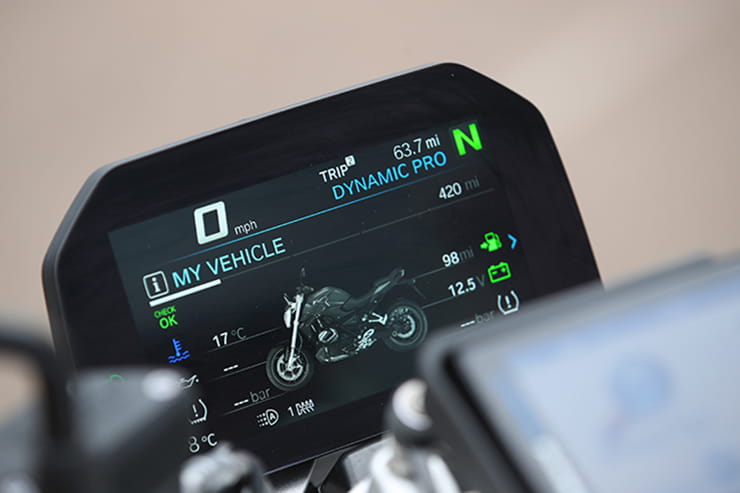 The SOS button calls you if the electronics detect the bike falling over to check if you are ok. You can also press it to report an incident

The TFT dash combines with BMW’s spinny-wheel handlebar adjuster to put a huge amount of information and adjustment at your nicely heated (the best £255 option you’ll choose) fingertips. The amount of info available is mind-boggling as is the customisability. You can control your sat-nav or connect a phone and have turn-by-turn navigation from a separate app.

On the Sport version there is also functionality shared with the S1000RR that displays in real time how much traction control you are using along with braking data (via the ABS) and even lean angle. When you stop it displays the max lean, TC and ABS used (data is lost when you turn off the ignition) so you can tell if you’ll be needing that extra trouser leg or not.

Except of course that when your engine has cylinders that stick out of the side like enormous, finned bunions, the lean angle is determined by the engineering a long time before the rider. The S1000RR doesn’t have this problem. 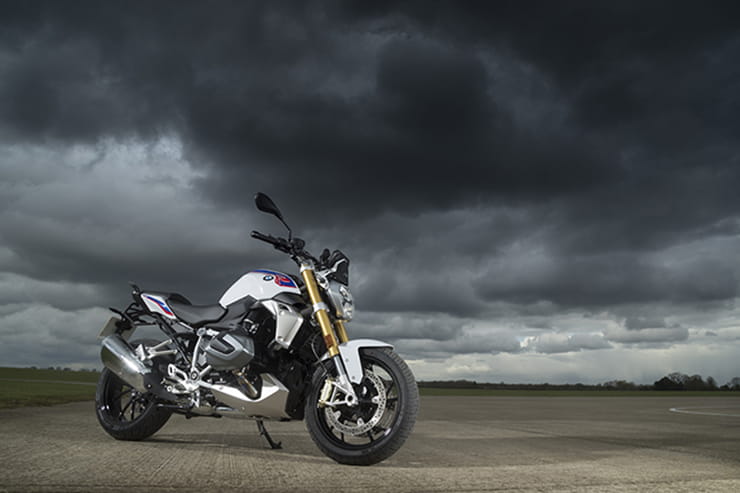 Does anyone else think it would look even better with the half-fairing from the R-Nine-T racer?

Bikes like this need time to get to know them and a short launch ride will never show them at their best. There’s no doubting the brilliance of BMW’s new ShiftCam engine, but trying to decide which flavour R1250 you want might need some thought and a few test rides.

A lot of the enjoyment on bikes like this comes through getting the best from the technology, but you need time to understand it and set it up to suit your riding and you don’t always get that on a dealer test ride.

It will be interesting to spend more time with the R1250R to get under the skin of all the performance options, but right now we’d be most interested in a Sports version with manually adjusted suspension and optional heated grips.