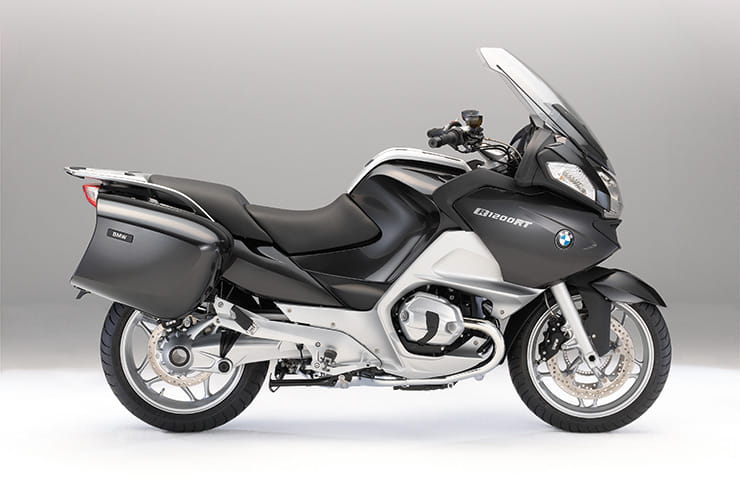 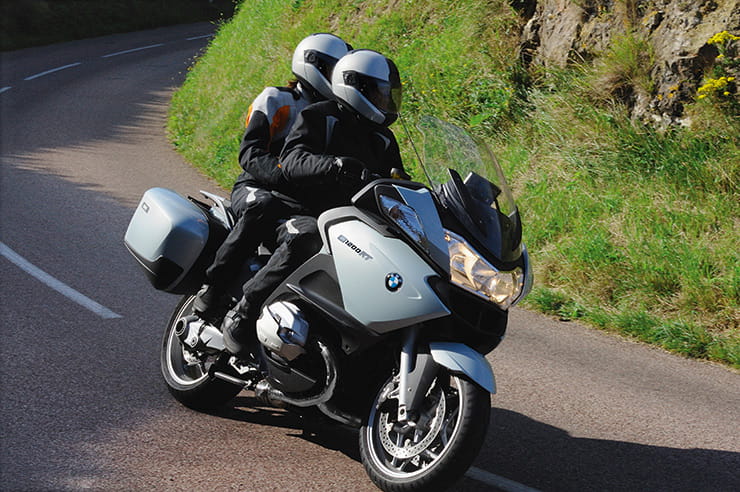 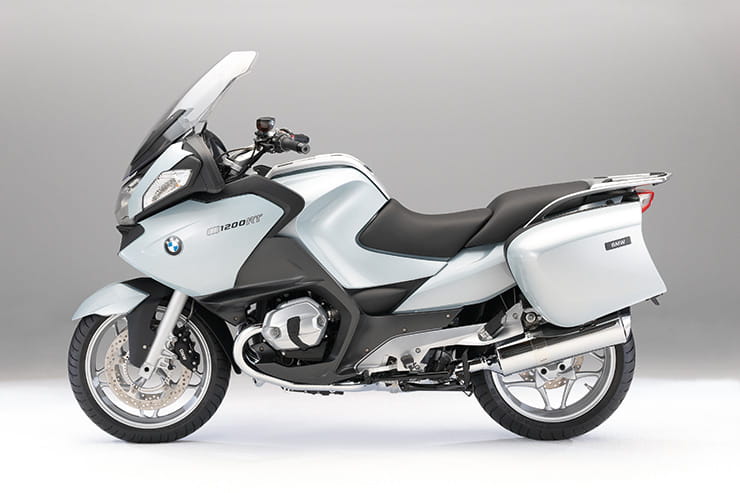 The RT (Reise-Tourer, which means travel tourer in German) is the bike that BMW built their formidable reputation for touring around. Initially launched in 1979 as the R100RT, this fantastic mile-muncher has steadily evolved over the years and in 2005 reached its final air-cooled incarnation – the R1200RT. For many this generation of RT, which comes loaded with creature comforts, is the epitome of the genre. Yes, the partially water-cooled version is smoother and more refined, but there is a certain simplistic charm to the older air-cooled boxer that is lacking in the new model. And it’s also considerably cheaper to buy! 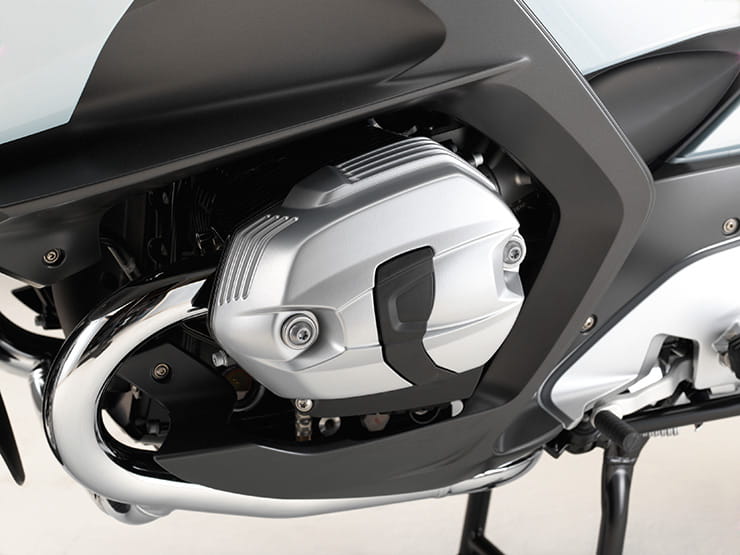 The boxer engine may appear visually similar to the R1150 unit, but it received a massive overhaul when it became the R1200. As well as expanding in capacity from 1130cc to 1170cc, the boxer gained an extra balance shaft to smooth out the ride as well as a boost in peak power from 95bhp to 108bhp with peak torque increased from 72ftlb to 85ftlb, however the actual increases happen throughout the rev range so in reality it is a far more significant advancement. During reducing the motor’s weight by 3kg, BMW took 1kg off the new crank, increased the flywheel’s diameter by 15mm and used lighter box-type pistons with three rings. Redesigned cylinder heads carry 2mm larger valves as well as a lightened valve train and a new six-speed gearbox with helical gears was also added with sixth designed as an overdrive. The Paralever shaft drive was updated for a smoother operation with less backlash. In 2010 the RT gained the HP2’s (which was used in the GS a year earlier) double overhead cam boxer motor, boosting its power and torque throughout the rev range as well as improving fuel economy. 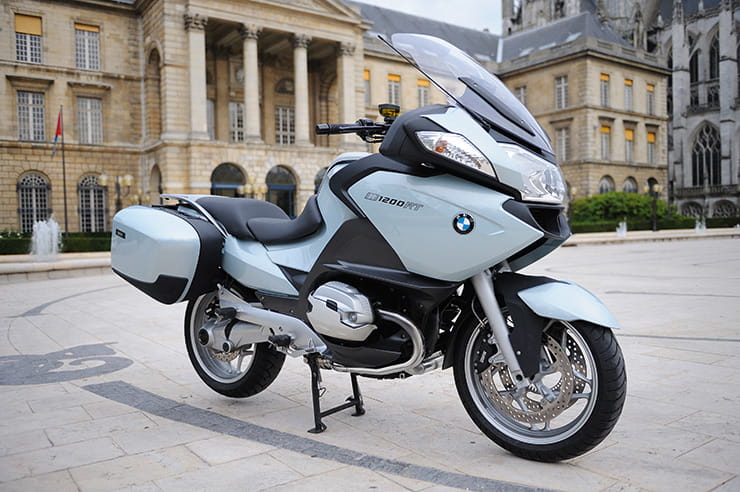 Like the GS before it, the RT shed a staggering 20kg in bulk when it went from R1150 to R1200. While still retaining the traditional Paralever swingarm and Telelever front end, the RT featured a new two-piece main/rear tubular steel frame. Using the same weight-saving truss as the GS, and incorporating the motor as a stressed member, this new frame was not only lighter than before, it was also stiffer with enhanced handling characteristics thanks to a new style of EVO-Paralever swingarm and stiffer Telelever front end. The wheels were also updated and cast from a light alloy in a five-spoke design to shed even more bulk and improve the RT’s handling. Interestingly, the RT’s 27-litre tank was made from a synthetic material, not metal, hence the need for its new tank rails should riders wish to fit a tank bag.

The R1200RT gained BMW ESA (Electronic Suspension Adjustment) as an optional extra for the first time, inherited from the K1200S. ESA allowed the rider to set the spring preload on the shock to either solo, solo with luggage or pillion and luggage via a bar-mounted switch while stationary. In addition, the system altered the rebound damping with comfort, normal or sport settings able to be altered while on the go. ESA II arrived in 2010 and added extra refinement to the system with the front shock’s spring preload now also being altered and ASC (traction control) was an optional extra alongside tyre pressure monitoring (RDC). 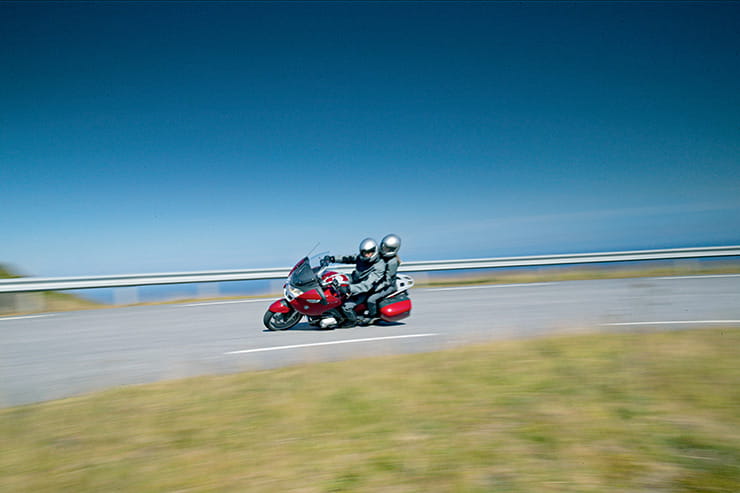 BMW called their new standard-fitment ABS system EVO and it featured partially integrated ABS system that was designed to allow the RT to be enjoyed in ‘a more active style of riding’ according to BMW. The twin front discs are 320mm and are gripped by four-piston calipers while the rear is a 265mm disc (down from the 276mm before) with a two-piston caliper. The brake lines were also made from braided steel as standard.

The 2005 RT gained a number of significant electronic advancements. For a start it used a CAN-bus network for the first time, paving the way for advanced electronics in the future. The BMS-K electronic engine management system featured an anti-knock control and oxygen sensor that controlled the air/fuel mixture to each cylinder, meaning it could run low octane fuel as well as improving fuel economy. ESA was an option, as was an updated onboard computer, however an electric screen was standard fitment as was an immobilisor. A plug-and-play alarm was an optional extra as was a Sat-Nav and radio/CD player. 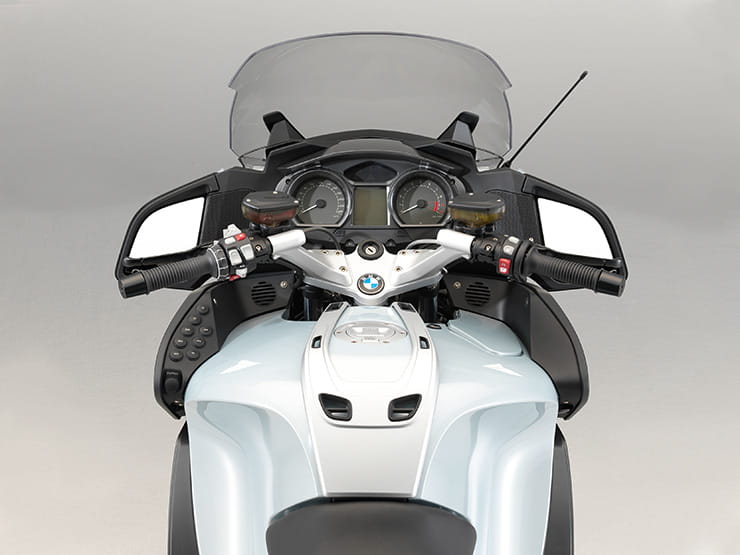 The RT was designed for comfort and the seating position is wonderfully relaxed with a seat height that can be varied between 820 or 840mm as standard with the option of a lower 780/800mm seat. In the 2005 update BMW also improve the fairing’s protective qualities, making it even more sheltered for both the rider and pillion.

With the optional top box to lean against, pillion comfort levels don’t get much better than on the RT. And even without it fitted there are few pillions that grumble about the RT as you get a well-padded seat and grab rails as standard as well as low-set pillion pegs. It’s a great place to be. 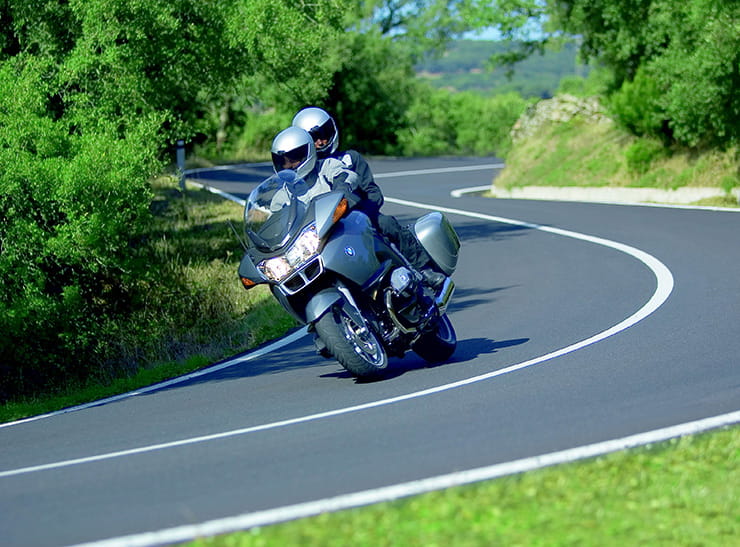 Considering the overall weight of the R1200RT without baggage, the engine is adept at pulling top gear from 3000rpm and makes light work of mountain gradients. It really is a case of selecting one gear and sticking to it. This allows the rider to concentrate on the road ahead.

Light vibration at the top end of the rev scale adds character to the engine and also serves as a warning when to change gear and drop the revs into another dollop of engine torque – why rev-out when you can surge forward in a fuss-free way?

While the Telelever front suspension is brilliant at taking out any unwanted dive on the brakes, it reduces the feel for what the front end is doing. It’s particularly worse on the RT because of the additional weight from the full touring dress it proudly wears. But if you’ve got faith in the tyres the RT can still cut a fine dash.

Until the advent of the new six-cylinder K1600GT models, the R1200RT was the best touring machine on the road according to BMW aficionados. Ride one for a week and it’s a good chance you’ll agree – non-aficionados too.

It’s bloody comfortable in the saddle. Bar, footpegs and switchgear are in the perfect position to relax for the next 900 miles. Helping out on the comfort front is the electronically adjustable fairing screen that can be deftly adjusted by switch to give a bluster-free ride. 968 miles in one day is not a problem to the R1200RT – nor is it to the rider. Been there, done it and walked away without an ache.

The RT is one of those bikes that refuses to age and if you are looking at covering big miles, you simply can’t go wrong with an R1200RT. It may be quite a physically big bike at 259kg wet, but the boxer motor carries its weight nice and low, aiding not only slow speed control but also the bike’s stability in the bends. You can hustle these big old beasts around corners with remarkable speed and confidence (just watch any police bikers!) and they are a great sport tourer with the emphasis more on comfort than outright handling prowess.

While the new partially water-cooled R1200RT is certainly a better machine and far more refined with a better array of electronic assists, you can’t write off the older air-cooled bike and if you are after a bike to take a pillion away for touring holidays, they are a brilliant, and very reliable, used buy. 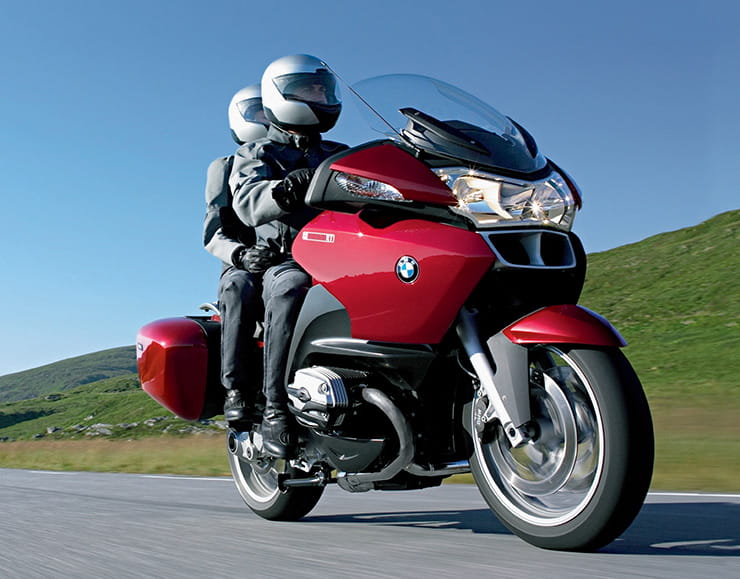 There are a few things you need to check for on an RT, none of which are that serious but which can leave you with an annoyingly high repair bill. For a start there is the ESA system (if fitted), which you need to ensure works and that the shocks (front and rear) haven’t developed any leaks as you can’t get them rebuilt and new items are over £600 each! You can just fit aftermarket items, but then you will have an annoying warning light illuminated on your dash. The cutch is also a costly pain to change on an RT (or any boxer) and generally starts to give up at around 80,000 miles, so always check for clutch slip on a test ride. During your ride listen out for a grumbling sound that hints at a worn shaft drive bearing and afterwards, look for any oil leaking out of the hub. Again, it’s easily sorted, but costs over £300. Some RTs also develop an oil leak where the engine meets the gearbox, so inspect this zone as well. Speaking of leaks, the RT’s clutch slave cylinder can start to weep, but happily a new unit is only £30 and swapping it is relatively simple - just ensure you use the correct specification of clutch fluid!

A full service history is generally recommended on a BMW (most have this) and it is also worth remembering that BMW dealers can sell used bikes of up to 10 years old as BMW approved used machines with a 12-month warranty and a year’s emergency service cover, which is reassuring. Occasionally you will find an ex-police RT for sale, these are generally very high mileage and are best avoided  - and no, you don’t get the lights included… 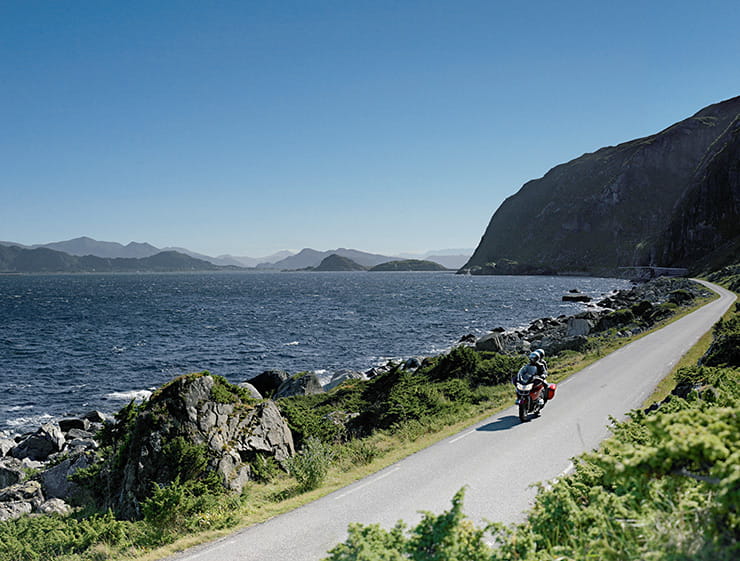 The R1200RT was updated in 2010 when it gained the new double overhead cam boxer engine, boosting its torque by 3ftlb but retaining the previous model’s 108.4bhp power figure. The motor’s entire rev range was improved, so it’s a far more significant update than the peak figures suggest. Alongside the new motor the R1200RT gained ESA II, ABS as standard, a new fairing, updated dash, new electronic screen and tank rails. The R1200RT became partially water-cooled in 2014, marking a major overhaul to the model with extra power, improved handling and even more electronic assists.