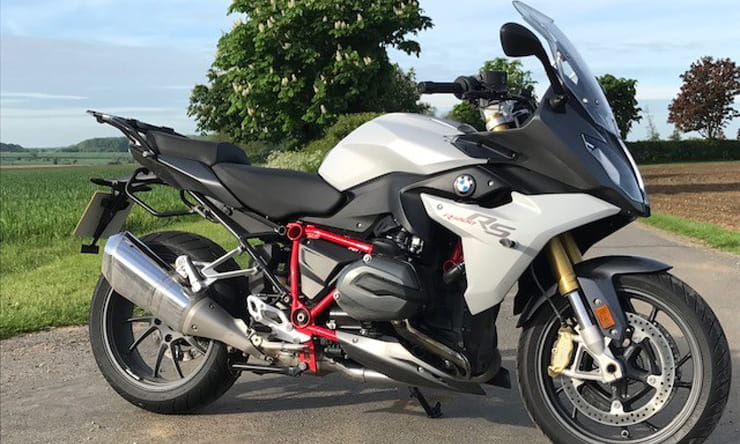 7850 miles in seven months. Eight things we liked and two that we didn’t

You’ll know why you chose an R1200RS instead of the taller, imposing GS or the heavier, more bulbous RT. And you won’t be disappointed. All the latest BMW Boxers run pretty much the same engines, gearboxes and electronics. The gearing differences are in the rear differential and obviously, the GS has off-road-focussed electronic settings.

You’ll buy an RS because you want something slightly less tall, easier to manage and sportier, but still offers long distance comfort, weather protection and the option to fit full luggage.

Chances are you’ll spec-up the electronics to the SE package and choose a few appropriate BMW accessories too, like the new-for-2017 Navigator VI sat-nav.

Having totalled up a bill somewhere around £15k for all of this, you’ll be looking forward to a lot of miles all over the UK and Europe, bonding with your bike. And you won’t be disappointed.

Based on our time with the RS it’s a bike you’ll love from the first few miles. The way it makes power, the ease with which it changes gear, the lightness of the clutch, power of the brakes and stability through corners will have you grinning throughout every ride until the tyres start to square off and you remember how long the wheelbase is. If you’ve had BMWs with previous versions of their ESA electronic suspension, you’ll also be pleasantly surprised at how much more suited the current pre-sets are to your riding than the old ones were.

There are two positions; loud and quiet, adjusted simply by either lifting or lowering the screen by hand...on the move if you feel like it. Not a huge amount of difference in comfort or windblast, which is actually a good thing because both positions are comfy, so you just leave it in either high or low and get on with enjoying things far more important than screen height 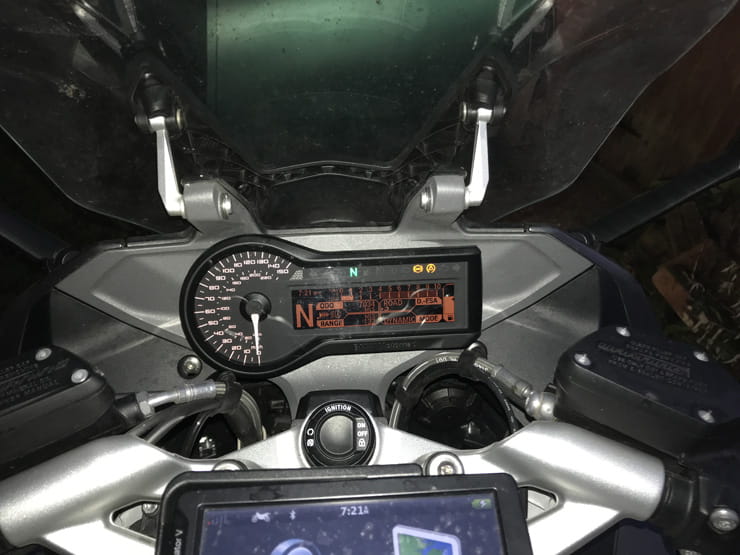 It doesn’t matter if you’re letting the clutch out at idle and smoothly transitioning from stationary to walking pace down a muddy, gravel track, or swapping 4301rpm for 5268rpm, the throttle response and fuelling of this motor is so accurate and so dependable that every part of going forwards becomes a pleasure. No glitches, no flat spots, no fluffing just-off idle. Love it.

For the first time in five years I had to test it. And it took a few moments afterwards to understand what happened. A twisty road in the wet, mud on a corner and I did exactly the wrong thing. I braked. The front locked momentarily and I thought I released the brake and then we didn’t crash. In hindsight what happened was that the brake released and then I let go of the lever. I’d be lying if I said it was seamless or that I didn’t get that squirt of adrenalin in my stomach – because I did. But I didn’t crash because the cornering ABS is better than I am.

Shaft final drive used to be heavy, clunky and disruptive in corners, upsetting the attitude of a bike when you needed it least. BMW’s Paralever system has been around for close-on 30 years now. It’s still heavy and unsprung weight too, but the clever design means it stays consistent in a corner. And, for me, the benefits of not having to adjust, lube or replace a chain and sprockets…ever make it worth a bit of extra weight. 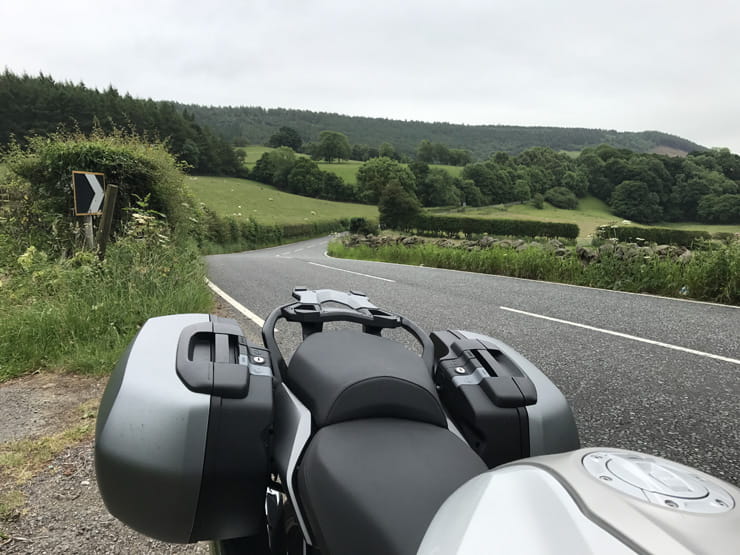 BMW’s factory accessories make everyone else’s look cheap. There’s no reason why this should be, but their heated grips work better and more reliably than almost anyone else’s. The luggage too, looks like it was designed to be part of the bike and works simply, but reliably. It’s not cheap, but when you ride a ten-year-old BMW, everything still works properly.

Every other keyless system I’ve used has been more trouble than it’s worth. Never quite reliable enough and still needing the key to open the fuel filler is just silly.

The BMW system is flawless. Lock and unlock the steering, switch the ignition on and off and open the fuel filler, all with the fob in your pocket. I’m converted. 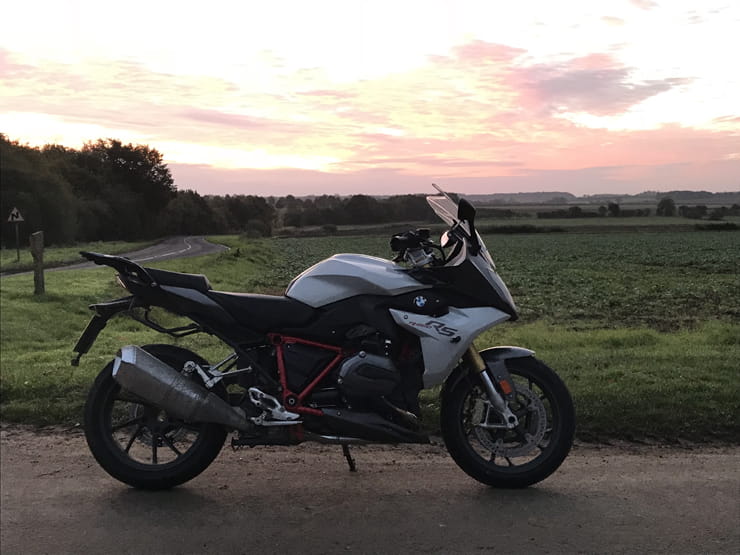 This isn’t a sports bike like a GSX-R. It’s long, heavy and lacks the Top-Trumps spec-sheet to impress the fast group. But, at road speeds the R1200RS accelerates strongly, gets to well above the legal limit quickly and has a confidence and poise about it that still lets you feel like you’re the one in control while, at the same time assuming you can get away with anything. That extra weight and lengthy wheelbase bring stability, which somehow adds a few split-seconds of thinking time to every fast corner. Hard to explain, but there’s a calmness that you don’t get on a full-fat sports bike.

And two things we don’t… 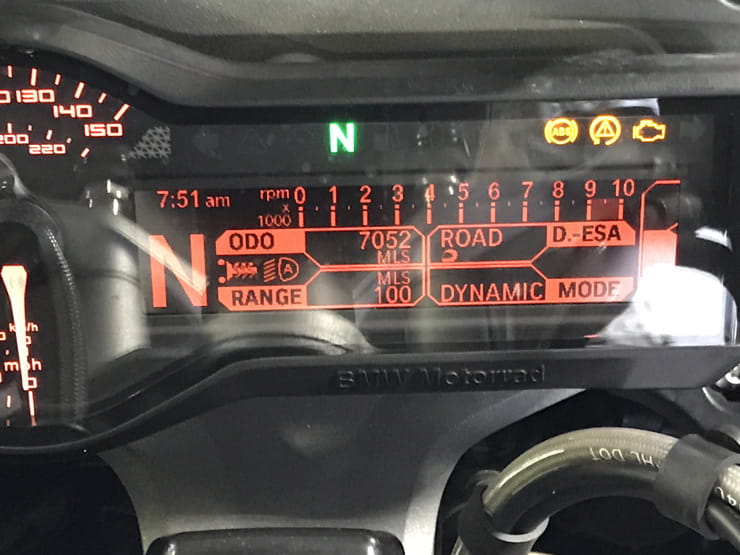 In a world of big, bright TFT dashboards with all the info in your face, the RS’s tiny numbers and drab LCD displays are really hard to read. If you only have a split second to glance down from the road you need to read and register the information instantly. On the R1200RS the numbers are so tiny and blended-in to the background that it takes an extra second or more to process and that’s inexcusable for a company that usually gets this stuff so right.

Not quite a quickshifter because there’s no auto-blipper, BMW’s gearshift assist allows you to change gear without the clutch… if you have the mechanical sensitivity of an angry road-mender. It does what it says it will but the experience is so clumsy, grating and mechanical – so at odds with the rest of the controls and responses of the bike – that it feels wrong and abusive to use it.

The clutch is light and conventional gearshifting is accurate, slick and an absolute pleasure. BMW don’t get much wrong these days, but this system is awful. 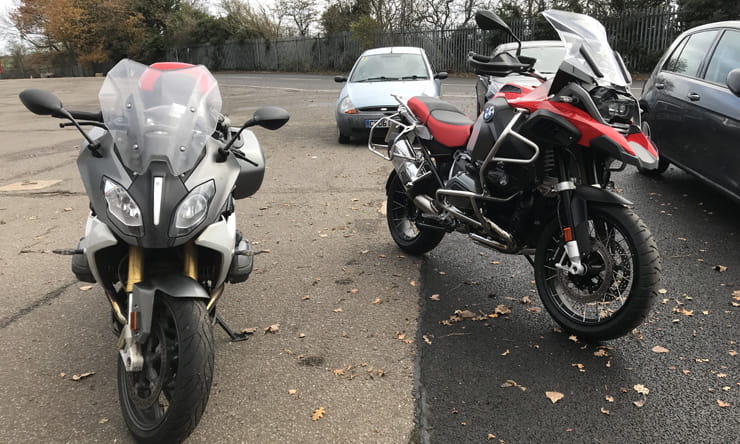 And the biggest problem is…

BMW’s own GS. Sorry, I was convinced the RS was better and I’ve deliberately avoided riding a GS all year. And then, after dropping the RS off at BMW HQ and saying an emotional goodbye, I rode a 2018-model GS Adventure back to the BikeSocial office.

And remembered instantly why I’ve spent considerably more of my own money on various GSs in the last 20 years than any other bike.

I can’t really put a finger on it. There are adventure bikes with more power, more gadgets, sportier handling, better brakes and for less money – I know that. But in the same way you don’t choose a pet based on its ability to do tricks, most of us don’t (or shouldn’t) choose a bike just because of the bells, whistles and numbers on a spec sheet. The current GS has all the performance and throttle response of the RS, but with added presence, Telelever front suspension (which is so much more composed and consistent) and, on the latest 2018 version, a big, bright TFT dash that is everything the RS’s dash isn’t - as shown below.

The big GS also has a personality and cheeky sprit that makes me feel right at home and capable of anything. It’s not an adventure thing – an occasional short-cut up the pavement is as adventurous as my riding gets – it’s a GS thing. Just my luck to fall in love with something so flipping expensive.

It took 30 miles to convince me that, as good as the RS is, when I buy another BMW Boxer, it will be a water-cooled GS. Dammit. 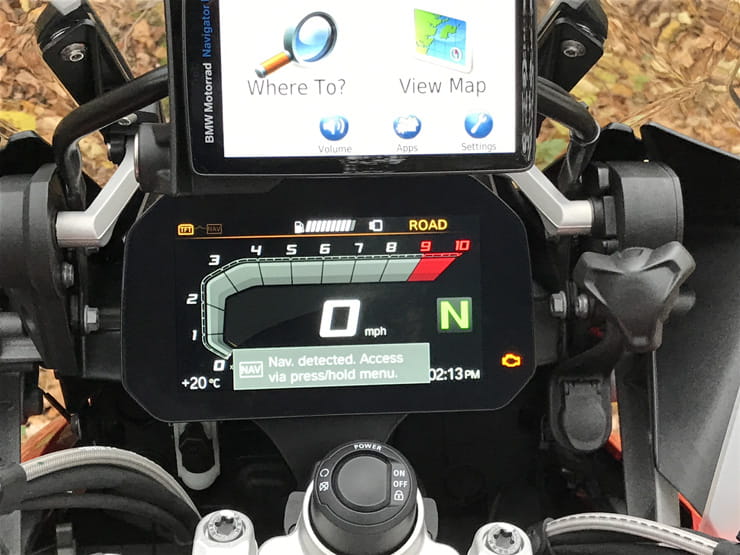