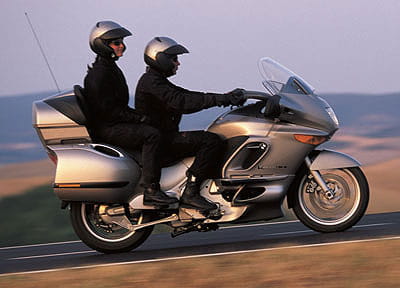 BMW launched the original K1200LT in 1999 and the big touring bus quickly went to the top of the touring podium. In 2004, BMW released a revamped version that put it way beyond any of its touring competitors for mileage riding including the long-serving Honda Goldwing.

Think of the K1200LT as the two-wheeled equivalent of a Rolls Royce and you’ll get a good idea of just how good the K1200LT is as standard. Even in basic trim the K12 is the most complete touring sofa you can get. BMW also released two higher spec versions (SE and Lux pack), which you pay dearly for but not as much if you leafed the accessory brochure and bought the kit parts individually.

Powering this 387kg goliath is a 1171cc four-cylinder that oozes torque the moment the clutch lever smoothly goes to rest. Because of this weight, it often lends itself to a series of throttle blips and clutch slip to get out of junctions cleanly especially uphill. That weight is a worry at hurried stops because even though the seat is low those of us with short legs end up delicately balancing a whole stack of German bike and luggage on one leg.

There are no worries about weight when it comes to backing out of the garage. A reverse gear is incorporated in to the starter system to help crawl backwards. Getting it up and onto the mainstand is as easy as pushing a button to operate an electro-hydraulic motor to power the mainstand into position – while sitting on the bike!

Where the K1200LT can fail is with incorrectly adjusted suspension according to weight of pillion and luggage that is carried. If not touched, even autobahn corners at autobahn speeds will induce a weave.

Stylish, supremely comfortable for effortless riding and smacks of quality, it’s not just the purchase price you should think about. A full service at your friendly Motorrad dealer can be a wallet-hitting affair; it can take over an hour to remove the fairing panels.

It wouldn’t be a BMW if it didn’t have sophisticated electronics, dash and handlebar layouts but that’s the price you pay when there’s a button or controlling knob to work everything from heated seats to six-stack CD changer, to GPS, to heated grips and more – more than a Honda stick could be waved at.

- points – expensive to maintain. Heavy – not even Hercules could lift it off tarmac.