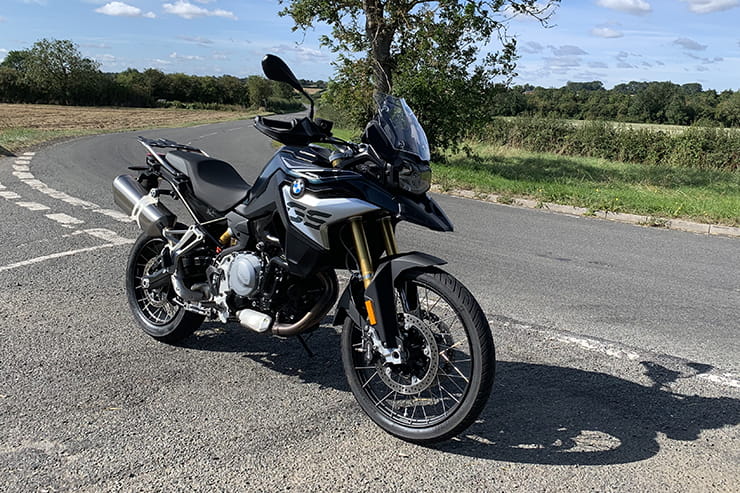 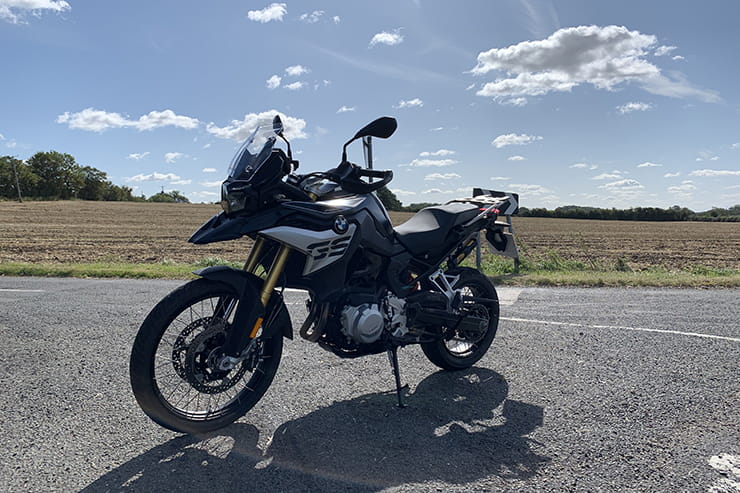 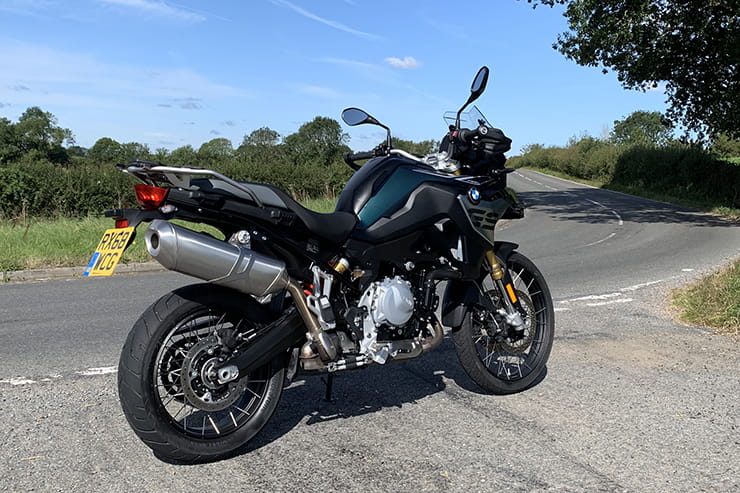 Imagine being back in 1995. You’ve just had your mind blown by test riding an awesome Ducati 748. It costs £10,350, but you’ve fallen in love with the way the fuel-injected twin revs like crazy, drives like no other middleweight sports bike you’ve ever ridden and just seems to accelerate hard with the slightest touch of throttle. Not only that, but it steers accurately, holds a line through any corner on even the bumpiest of roads and has just devoured your favourite B-road without so much as a wiggle.

Now try and imagine how you’d have felt if someone had told you that BMW (who back then only made tourers and even-bigger tourers) would one day make a trail bike that made more horsepower, accelerated harder, handled even better on the road, did almost twice the mpg and cost £500 less.

It sounds crazy, but BMW’s F850GS does all of the above and more. And that’s before you even think about taking it off-road.

The standard F850GS costs £9875. It has manually-adjusted suspension, two riding modes (road and rain) and BMW’s standard-system ABS. Triumph’s base model Tiger 800 XR costs £9200 and KTM’s 790 Adventure is £10,999 but the base model KTM has a lot more standard kit than the BMW or Triumph.

The F850GS Sport we tested starts at £10,990 and has traction control, two additional riding modes (Dynamic and Enduro), plus a quickshifter, heated grips, LED headlight and ABS-Pro.

Electronic suspension adjustment, luggage and a centrestand are still extras on top of that. The bike we tested (with all of the above as listed including luggage fittings, but no actual luggage, plus keyless ignition and tyre pressure sensors) would cost £12,110. 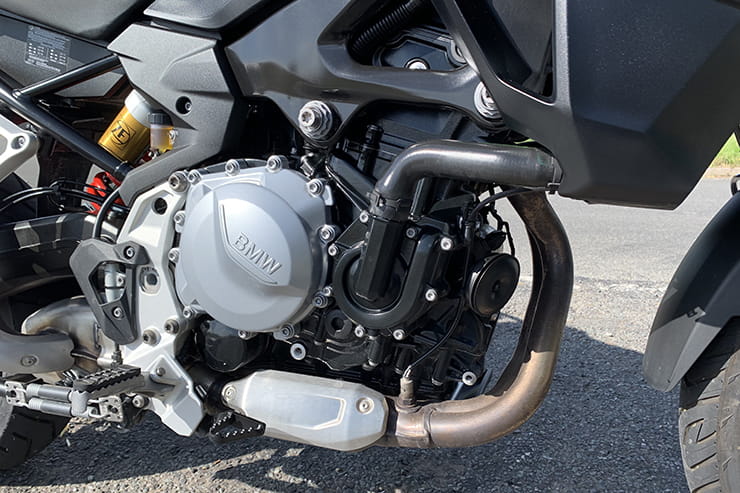 94bhp hasn’t felt so fast and frantic since you last rode a tuned Suzuki RG500, but the F850 can do relaxed cruising too

Peak power is capped to 94bhp to allow the F850 to be restricted for A2 licence holders. 67lb-ft of torque delivered at 6500rpm is actually the more relevant figure on a bike like this and the flexibility it brings is very welcome. On the road you tend to change up at peak torque as you can feel the acceleration start to drop away. Thrashing it through to the redline finds an extra slug of power you weren’t expecting and a great-big bonus-grin, but doesn’t really make it go any faster from A-to-B.

The engine is the star of this particular show. BMW’s parallel twin motor had a major redesign for 2018. Aside from the capacity increase, the biggest change was to drop the counterbalancing ‘dummy piston’ used in the old 800 motor, replacing it with dual balancer shafts. At the same time, BMW updated the fuelling and ignition systems and the result is an engine, like most BMWs that revs so quickly and freely it feels like the pistons are made from race-grade carbon fibre.

The throttle action is very light and response is immediate with revs rising and torque arriving very quickly. It’s all very controllable though.

Clutch action is very light; almost too light, as if there’s some mechanical assistance that removes a bit of ‘feel’ to the action. The gearshift is easy, slick and consistent too. Our bike had BMW’s quickshifter fitted, which works well when you’re riding aggressively, but less so at lower revs and smaller throttle openings. 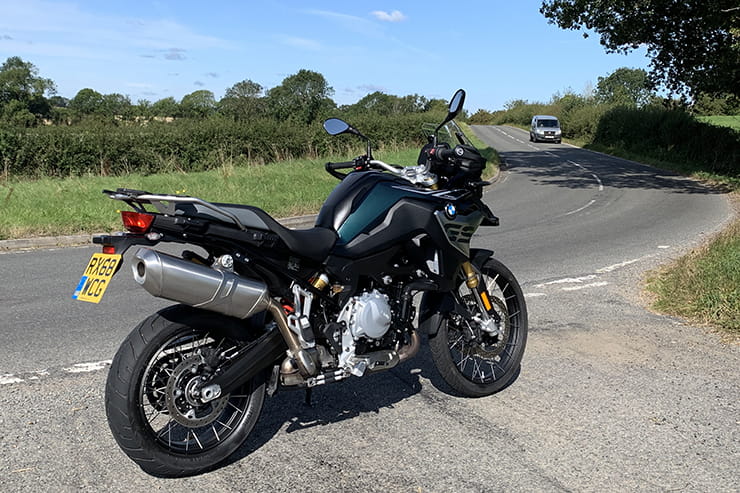 BMW claim the new 850 motor is more economical than the old F800. That bike was one of the first modern bike engines to be genuinely frugal, easily achieving 60mpg, so we were expecting the F850 to be better-still.

The average figure on test was 60.5mpg, which is good, given the amount of performance available and the irreverent way it encourages you to ride. Thrashing it like an idiot down backroads gave just under 55mpg (which is bloody good, considering the riding style) and some very busy variable-speed motorway riding, between 60-70mph gave 68mpg. Both those figures are good, but no real improvement on the old F800 motor. I was expecting better. 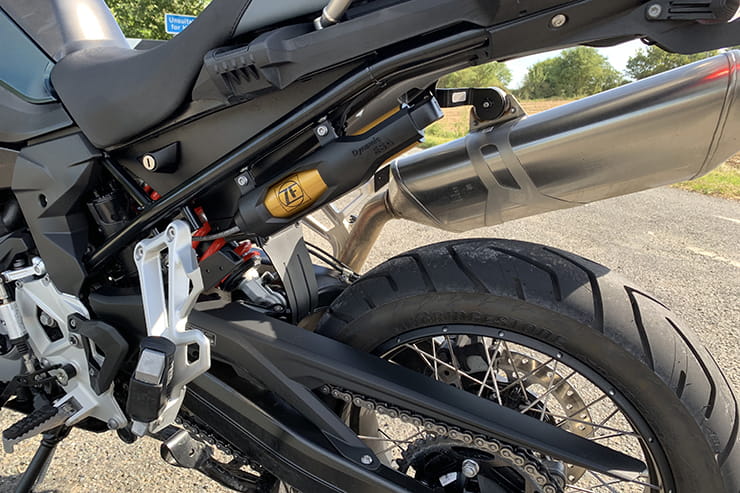 229kg fully fuelled and ready to go is just on the heavy side for a middleweight off-roader, but the trade-off is that the GS has a huge (216kg) payload. So you, your partner and somewhere around 60kg of luggage should be fine. At least up to the point where you have to slow it all down (see below) or park it and the very long sidestand means your £12k pride-and-joy is perched a bit more upright than you’d like. A centrestand is optional and worth having.

The F850 feels less of a road bike and more of a traditional trailie than KTM’s 790 Adventure. Closer to Honda’s Africa Twin too. What this means is that the seat is tall, the suspension feels very softly sprung and almost under-damped at low speeds. Tight corners taken aggressively show this up dramatically with the bike feeling loose at the back end, like it wants to slip and slide. On our test bike, fitted with BMW’s ESA electronically controlled suspension, things get much better as the speeds increase. ESA alters the preload, spring rate and rebound damping electronically via a simple selection of preset modes. In ‘Dynamic’ mode on fast, bumpy backroads the GS is sharp-steering, very controlled and all-too easy to ride off the edge of the skinny front as well as the rear tyre without the rider even being aware of it. Set the suspension to ‘Road’ mode and, while fine on bumpy backroads, there was a weird almost see-sawing motion at 70mph on motorways. It disappeared in ‘Dynamic’ so that was where I left it most of the time.

Long suspension travel at the front and rear make bumpy roads feel like smooth ones and the excellent low-speed balance makes filtering easy. Thankfully, for a bike with wide bars the mirrors are also at a good height for dodging the wing mirrors of both vans and 4x4s.

I didn’t ride it off road, but standing up to ride some of my regular extra-bumpy test route roads didn’t feel as natural as it had a few months back on the KTM 790 Adventure. I couldn’t get comfy stood-up on the F850 without accidentally tweaking the throttle at the wrong moment. 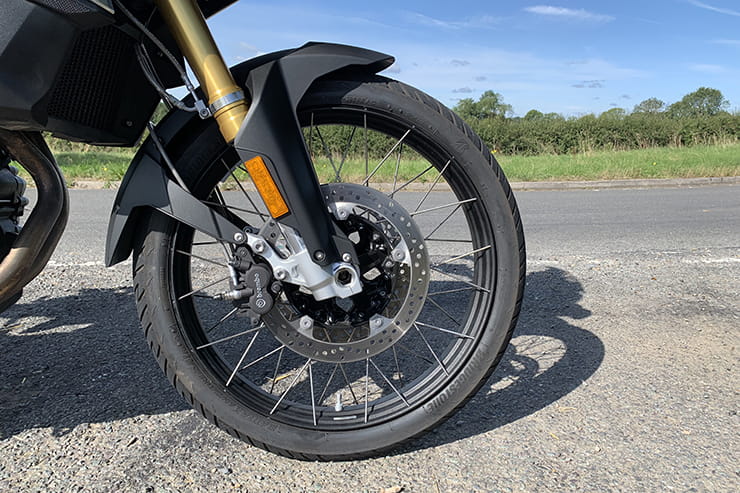 Twin piston Brembo calipers work hard to stop 229kg plus rider. Add on a pillion, plus luggage and prepare to become the first of the early brakers on a busy road.

First impressions are that the brakes could be better. Grabbing a handful of front lever sends the suspension diving without the expected amount of stopping. In time you get used to it and brake a little earlier and harder. I guess that an off-road bike needs more feel than power and the F850GS always stops safely. KTM’s 790 has a similar set-up, needing a stronger tug on the road that you’re expecting. Riding with a pillion really brings home the shortcomings on a twisty road. As a road tester you notice it, but if it were your bike you’d be used to it in a month.

BMW’s ABS-pro (standard on this ‘Sport model, optional on the base bike) is lean-angle sensitive. It’s a hard system to deliberately test safely on the road, but I have been on a couple of other BMWs where it’s been deployed and the system is impressive. Hitting some gravel on one occasion, while leant over, it allowed me to keep on braking. Instead of the front wheel tucking under and crashing it simply started to come gently upright. 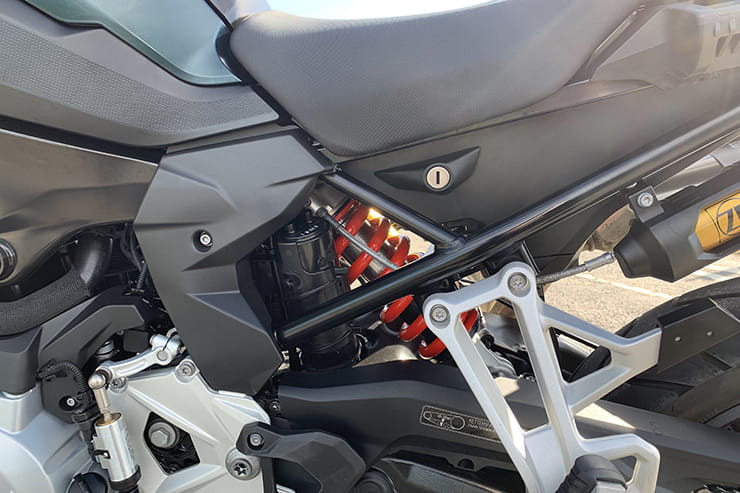 Riding position is relaxed, but the seat loses comfort after a couple of hours

The moment you realise this is more of a proper trail bike than something like the R1250GS – which is actually the world’s best road bike that just happens to look like an off-roader – is 90 minutes in to a three-hour journey. This is the point where you start to shuffle on the softly padded, ‘could-be-wider’ seat foam that just gave up on trying to support your ‘clearly-not-as-padded-as-I-thought-it-was’ backside.

This is also the moment where your achy ass distracts you from your aching ears caused by the noisy screen that’s too small to hide behind. 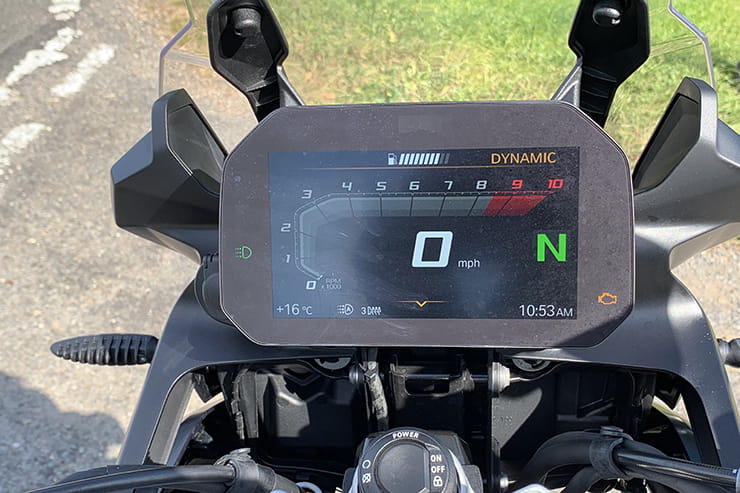 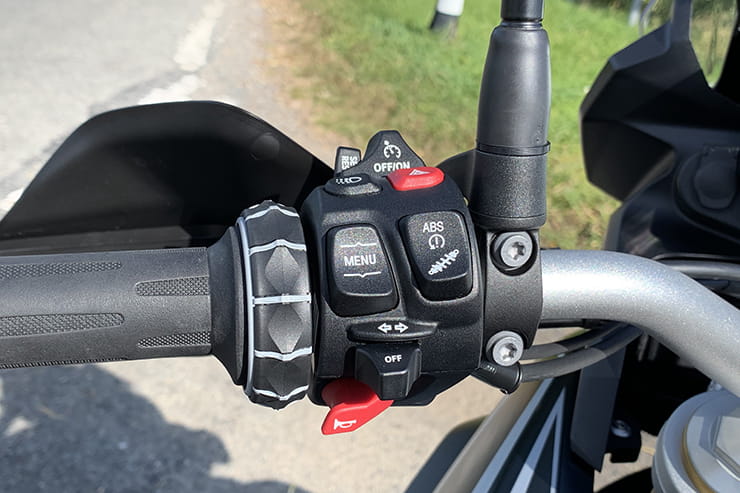 TFT display is lovely and (mostly) easy to use. BMW’s keyless ignition and fuel filler works reliably too. Left-hand switchgear is cluttered, but manageable.

BMW’s current TFT dash is a lesson to every other manufacturer in clarity and stylish design. Easy to read, mostly simple to use (I could find everything I needed intuitively apart from how to reset the trip milometer) and packed with information. This F850 Sport model is packed with rider aids, traction control and sophisticated ABS, but the weird thing is that, on road, at least, the throttle control, engine response and massive reserves of chassis ability mean you’d have to be a very clumsy rider to ever need any of them. It’s one of those bikes that just makes things easy. I tried riding in an ever-more-dim manner to get the aids to light up and save me, but I never even got close. The damn thing is just too capable on its own. 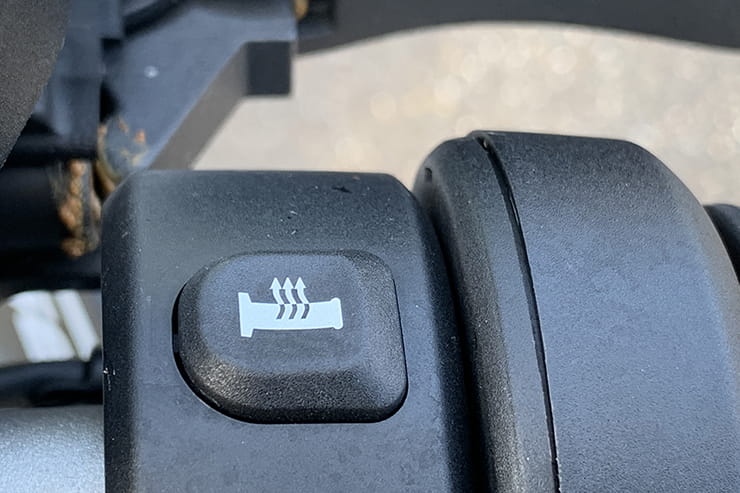 This button is one of the best things in motorcycling, no question.

A word about factory-fitted heated grips

If I worked in a motorcycle factory design team, I would start with the heated grips and work outwards from there. Good heated grips are not just for winter riders. Early starts, summer dawn and dusk rides, spring and autumn showers all ridden in your favourite thin, well-protected race gloves.

Good heated grips mean never having to fall for the marketing gumph surrounding winter gloves (that are never, ever warm enough for long enough) again.

BMW make the best factory-fit heated grips. Simple to use, warm enough to be worth the money and dependable. In a world where many aftermarket items are lucky to survive a year, I’ve ridden ancient BMWs that look like something Mad Max rejected and the grips still work. 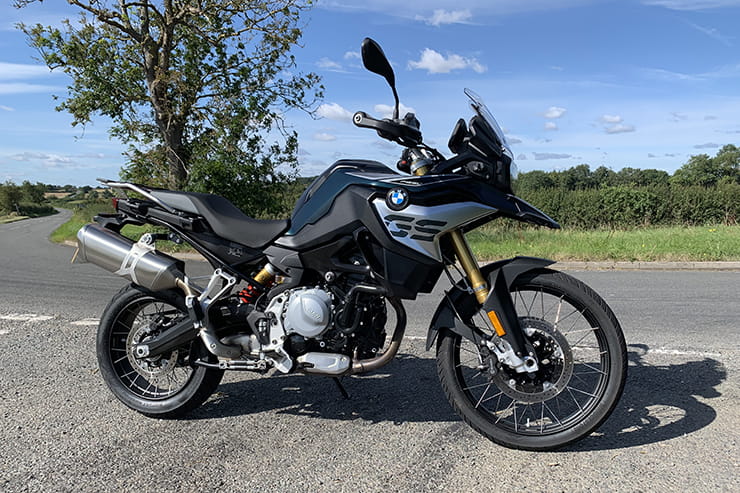 The exhaust moved from the left side to the right on the F850 because most people push a bike from the left-hand side and getting your textile pants stuck on a hot pipe is embarrassing.

The F850GS is a good bike – it’s that simple. The engine is lovely; fast and frantic when you want it, easy and economical when you want that instead. The chassis is capable on road and those in the know tell me it works off-road too. It has all the essential modern gizmos, as many options as you could ever need and, by modern measures it’s reasonable value too.

What it isn’t is a slightly smaller, slightly cheaper R1250GS. The two bikes have a completely different feel and personality. The bigger bike is still the world’s best roadster that also happens to be surprisingly good off road. It has a personality and a sense-of mischief that the F850 lacks. Where the big GS is the only serious choice in its class, the F850 has some talented competition and it’s a much closer call for your money.

Equally, you’d be daft to buy a KTM, Triumph, Suzuki or Honda without trying the F850GS too. 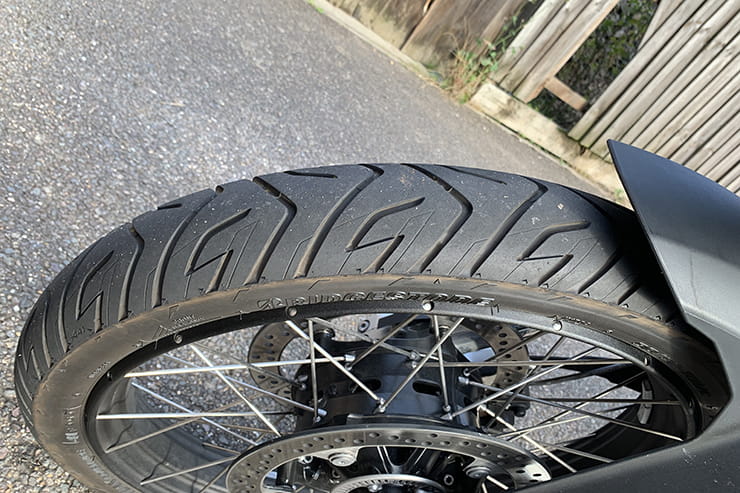 Riding off the edge of your front tyre never felt so easy or safe (or fun).

• The engine and throttle response

• Brakes could be better

• Not comfy enough over distance