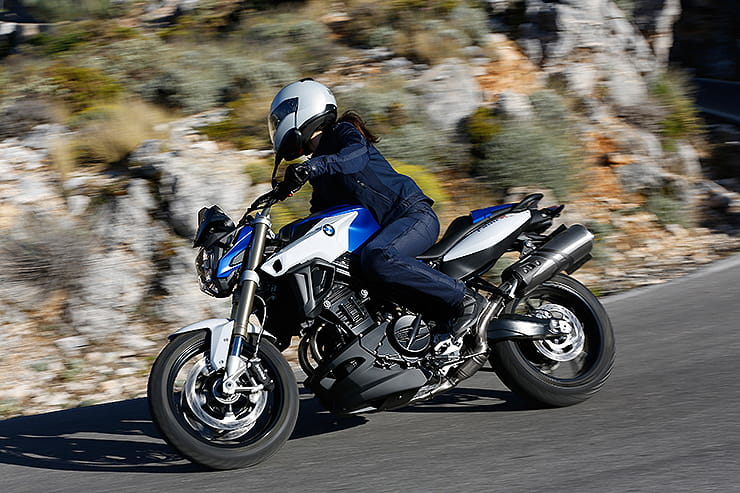 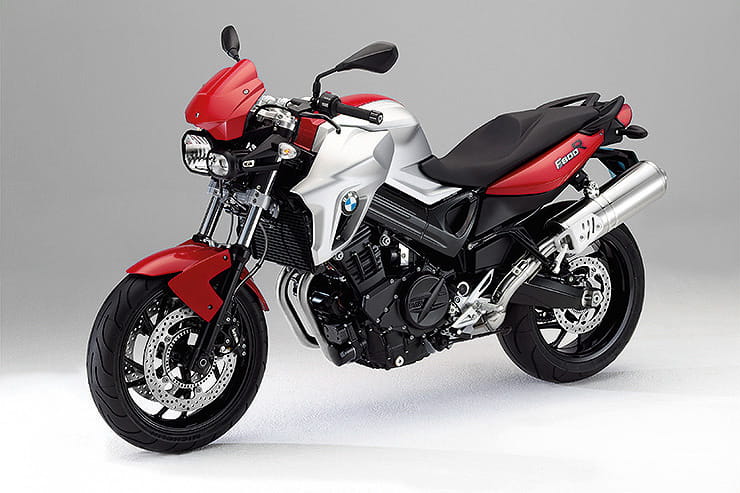 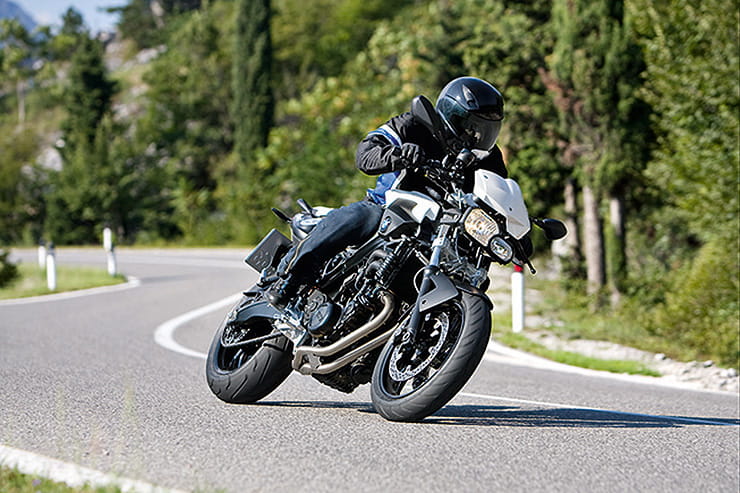 When it comes to middleweight naked bike, most riders tend to overlook BMW as there is an assumption that the German firm only makes ‘big’ bikes. However since 2009 BMW have been producing the F800R model, a naked middleweight that in many ways offers a far more ‘grown up’ riding experience than rivals such as the Yamaha MT-07 or Kawasaki ER-6n/Z650 range. Using the same parallel twin style of motor as its Japanese rivals, the F800R comes with a far more advanced set of optional extras such as traction control or even on the latest generation an ESA shock. So why is it overlooked? As well as a generally far higher price tag, despite their best efforts (which included employing a stunt rider to promote it to the yoof) the F800R isn’t the sexiest of bikes and it lacks the cool image that its rivals portray. However if you want a solid and well specified naked middleweight, the BMW F800R should certainly be quite high up on your consideration list.

Like most naked bikes, owners tend not to cover huge mileages on the F800R and as such used bikes are seldom seen with over 20,000 miles on their clocks, which is great news. However the bad news is that the BMW is not a cheap used machine. You can pick up a first generation model (2009-2011) for around the £4000 mark, which is quite pricey when you consider it is 11 years old, while a second generation (2012-2014) is around £4500 and prices for the final generation (2015-2019) before it became the 2020 F900R start at £5000. It is only the final generation that sees spec make a noticeable difference to its price tag as the first two models were fairly limited in their optional extras.

BMW claimed a fairly respectable 87bhp (63.5kW) for the F800R with the updated 2015 model upping this to 90bhp (66kW) @ 8000rpm, which can be made A2-legal if required through a restriction kit. This is backed up with 63.4lb-ft (86Nm) of torque, which again isn’t to be sniffed at. To ride it is actually a very pleasant motor with a strong mid-range and a very smooth power delivery, however it isn’t that thrilling and that has always been the F800R’s downfall. Where the MT-07 excites and surprises with its hysterical motor, the BMW just gets on with the job in hand and as a result feels a touch lacklustre and more a roadster than a spirited naked as a result. Is that a bad thing? It depends on what you want from an engine and the F800R’s parallel twin does have quite a few positive points.

There are very few complaints about the reliability of BMW’s parallel twin motor and it is fairly vibe-free thanks to a balancer shaft (a few owners fit heavier bar end weights to damp out the ‘character vibes’). Servicing is required every 6000 miles and it is quite cheap at roughly £200 a go with the valve clearances (every 12,000 miles) upping this to £350. The gearbox is solid and owners also report that a high level of overall finish also sees the standard exhaust system fending off corrosion and holes well. Not that many owners bother to swap the end pipe for a louder unit, it isn’t that kind of bike. If you are buying used, look for a good service history and inspect its condition and you should be safe. 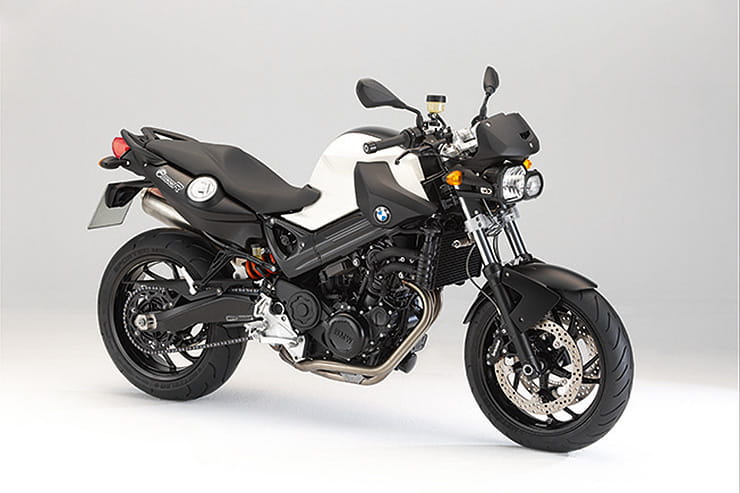 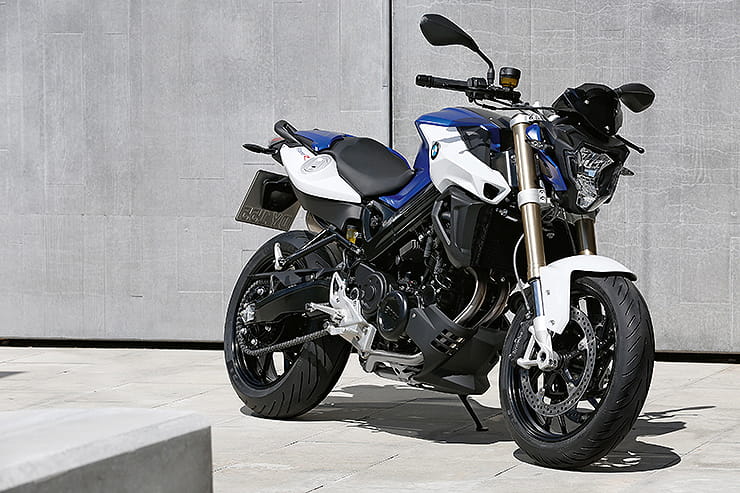 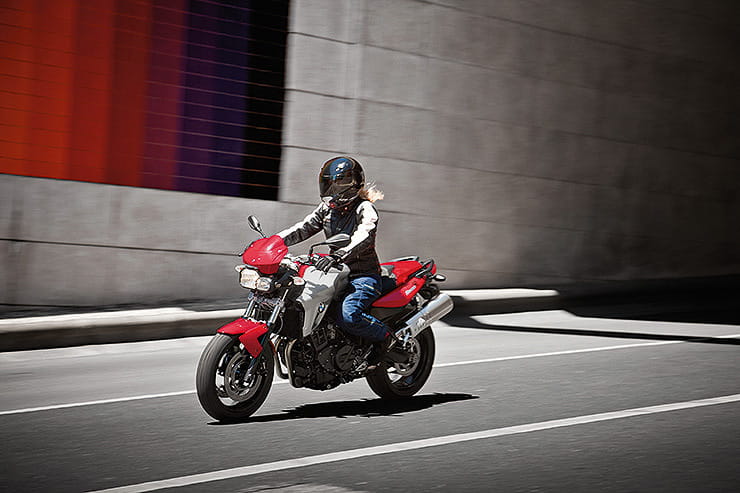 The F800R is remarkably frugal with BMW claiming economy figures in the high 60mpg range achievable. On the open road the reality is a figure in the mid-50s area, however that is really good going for a middleweight naked bike and over 150 miles from a tank (err, seat as the fuel tank it is isn’t actually located in the tank area, hence the reason the filler cap is on the tail unit) is certainly achievable.

Something of an unsung hero in terms of its handling, the F800R can certainly be thrown at a set of bends with enthusiasm and is far more composed on its suspension that the first generation of MT-07 models and also the ER-6n. While no F800R model gets any adjustment on its forks (which were swapped to inverted units in 2015), they are set very well for road use and this isn’t really too much of an issue. In 2015 BMW added the option of ESA to the shock (for £290) however it isn’t semi-active, it is just a push-button damping variation system. On used bikes always inspect the shock for corrosion and leaks as it isn’t rebuildable and the forks for leaks around the seals as by 20,000 miles they may well need replacing. Although it has a seat height of 790mm as standard, BMW sold low 770mm or high 820 options so just check which is fitted as a too low or too high seat can make the riding position quite uncomfortable.

Alongside inverted forks, the 2015 F800R gained radial Brembo brakes with ABS as standard where on the previous two generation the conventionally-mounted Brembo calipers only had ABS as an optional extra. A strong braking set-up on all models, there is little to find fault with and they provide more than enough bite for a lightweight bike such as the R. 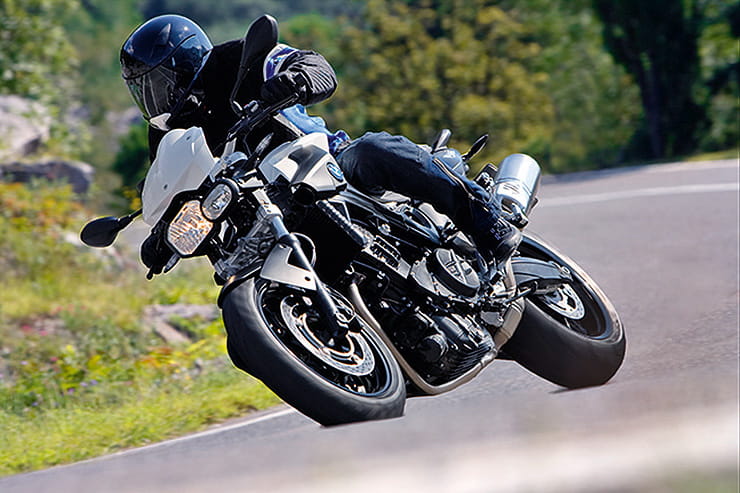 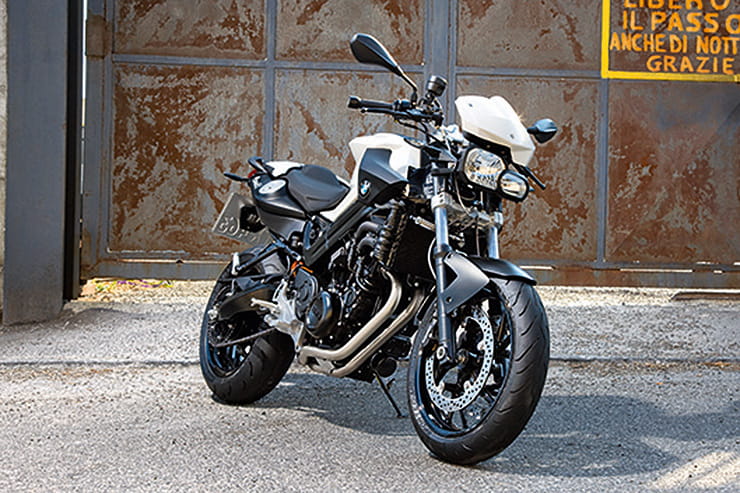 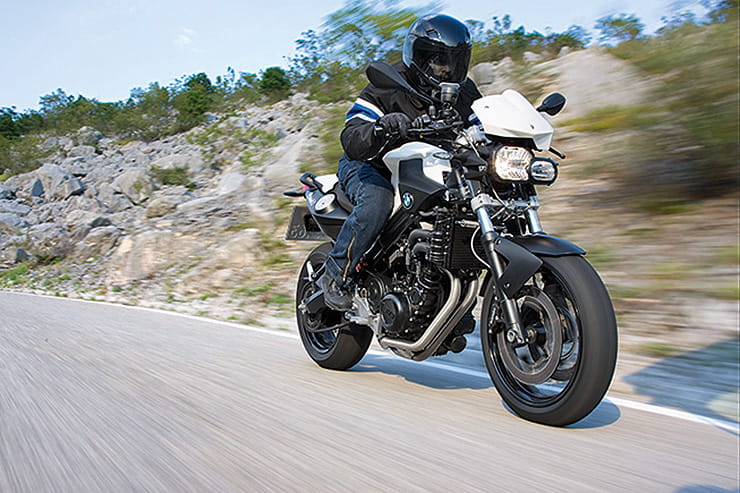 The F800R’s relaxed attitude makes this a decent option for short-ish tours and a lot of owners fit luggage systems and a screen to allow them to take it on trips away in extra comfort. You can also add BMW’s heated grips alongside a tyre pressure monitoring system. Thanks to its decent tank range of over 150 miles, you won’t be the one dictating fuel stops if your fellow riders have bigger capacity machines. Overall, yes, you can certainly use the F800R as a tourer as long as you keep the speeds down as it does lack a protective fairing.

The only rider aid on early F800R models was ABS, which was an optional extra. In 2015 it came as standard and was joined with the option of ESA on the shock as well as ASC, which is BMW’s traction control system. Heated grips and a tyre pressure monitoring system have always been available as extras and so has an updated on-board computer. A great addition is a centre stand as the F800R has a chain drive and not a belt system so requires lubing while a belly pan helps to protect the motor from getting hit by crud. Other than the normal panniers, screen, luggage racks etc, most F800R models stay pretty stock.

The F800R may not be the most thrilling of naked middleweights but it is a very solid machine that feels more grown-up that its Japanese rivals. A really good roadster, it does cost more to buy but you are rewarded with a high level of not only specification but also build quality. Try one out, it may well appeal.

Three things we love about the F800R… 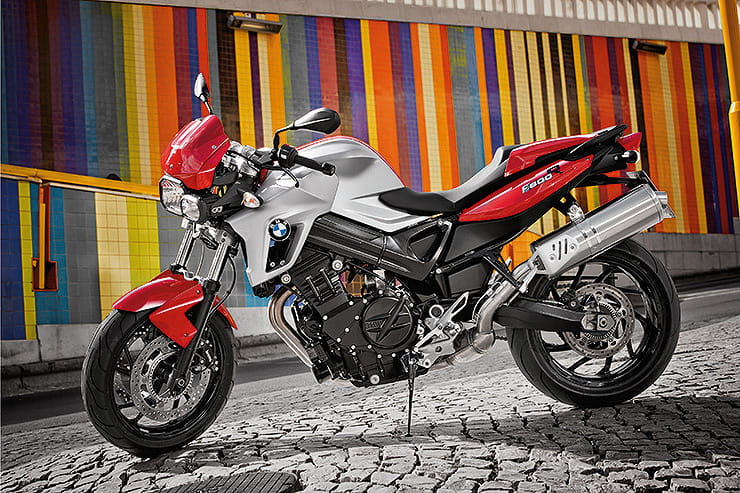 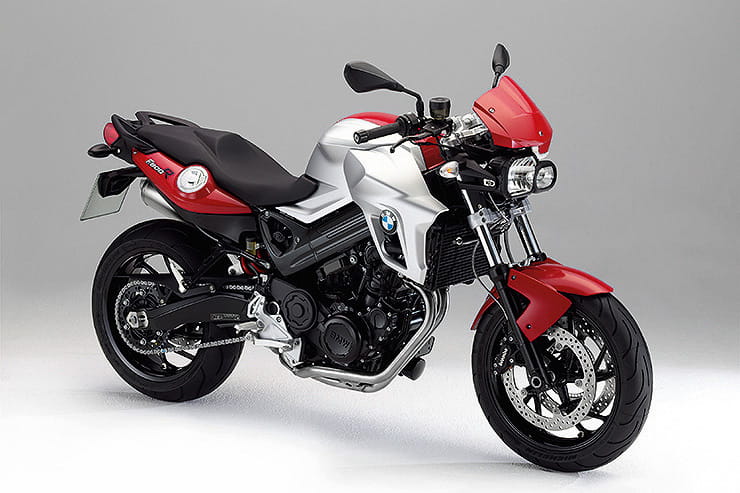 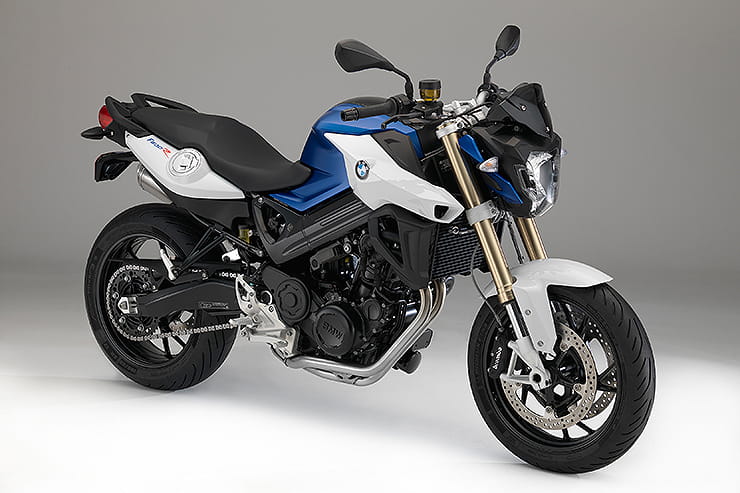 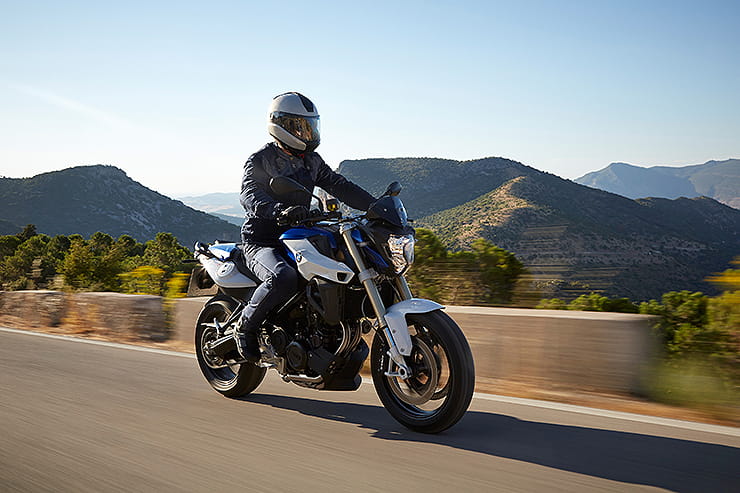