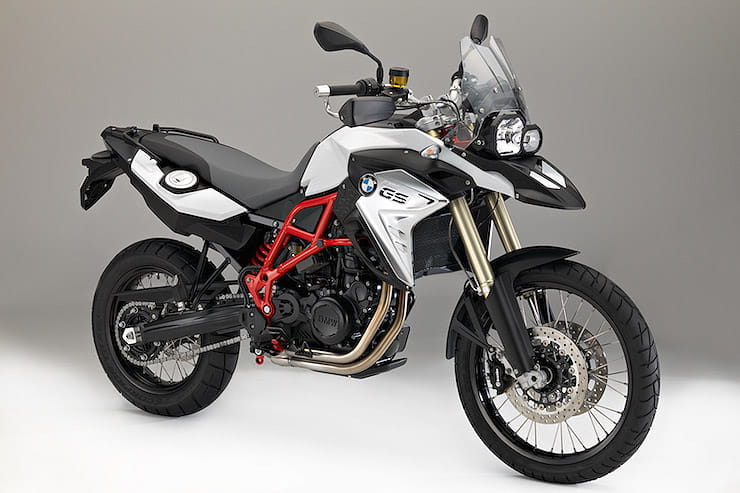 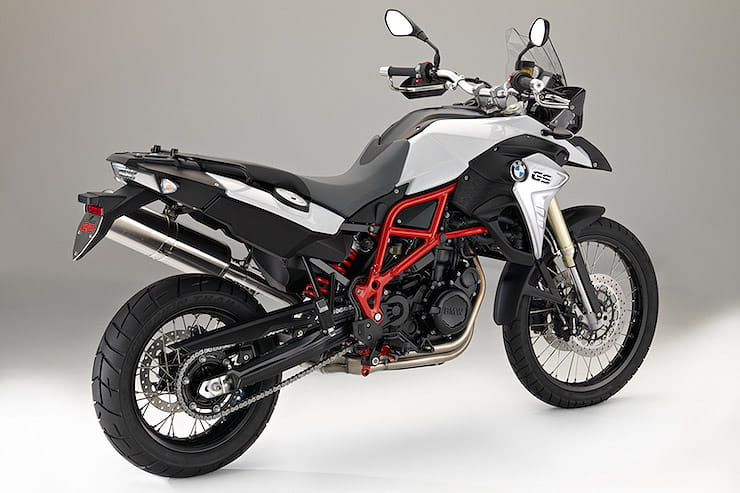 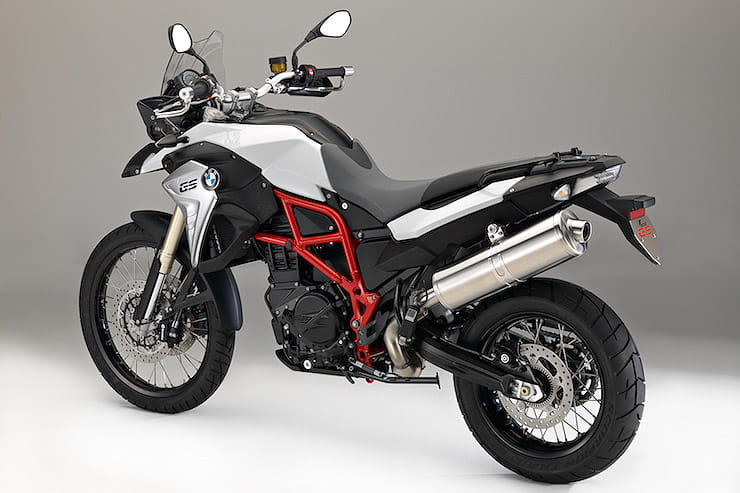 Although suffering from slightly confusing model names and lacking the cachet, recognition and status of BMW’s full-size, market-leading R1200/1250GS, the German firm’s middleweight adventure family, the F-GS series, are genuinely versatile and effective bikes in their own right. Best of all, there’s also so many different variants, with the prices and spec to match, there’s an F-GS to suit pretty much every need.

Both are based around BMW’s then-new F800 chain drive parallel twin powertrain, which debuted in 2006 in the F800S sportster. After that, however, things start to get confusing. In 2008 BMW launched the first F800GS, plus, at the same time, a more budget, novice-friendly variant using the same engine and capacity but with softer performance called the F650GS. This name was chosen to continue the nomenclature of the preceding entry-level F650GS single the new twin replaced. In 2013 these were updated to become the F800GS and F700GS respectively (although both remained 798cc). A further round of tweaks came in 2016 before both were finally replaced by the enlarged, bored and stroked 853cc F750GS and F850GS in 2018. BMW also added the F800GS Adventure variant in 2013.

At one extreme, therefore, there is the fairly basic but accessible and versatile F700GS while at the other a high-spec F800GS can be a genuinely global and off-road capable all-rounder, especially if accessorised with BMW’s legendary options such as luggage, heated grips, electronic suspension adjustment (ESA) and more. All, however are decently built, have impressive reliability records, the cachet of the BMW badge and, for most, are actually more usable – especially off road – better value and more day-to-day manageable than the often massive, full-size R-GS series most aspire to. Find a good BMW-warrantied ‘Approved Used’ example with the options that suit you best and you won’t be disappointed.

BMWs, being a premium brand, never come cheap but the middle-range F-GS series has always been temptingly affordable – as long as you don’t go too mad with BMW’s options list! – and especially when compared to the bigger and more luxurious R-GS series.

The F700 has always been the cheaper of the two, as you’d expect with its more basic spec and lesser performance. But used F800GSs can be cheapest of all, simply because that variant dates all the way back to 2008, five years older than the oldest F700. Overall, however, BMW used prices hold up well and price variations are down to mileage and spec, with options such as heated grips and luggage highly valued. Today a recent, low mileage 700 can be had for around £5,500. A decent spec 800 of similar vintage and mileage is about £1000 more. 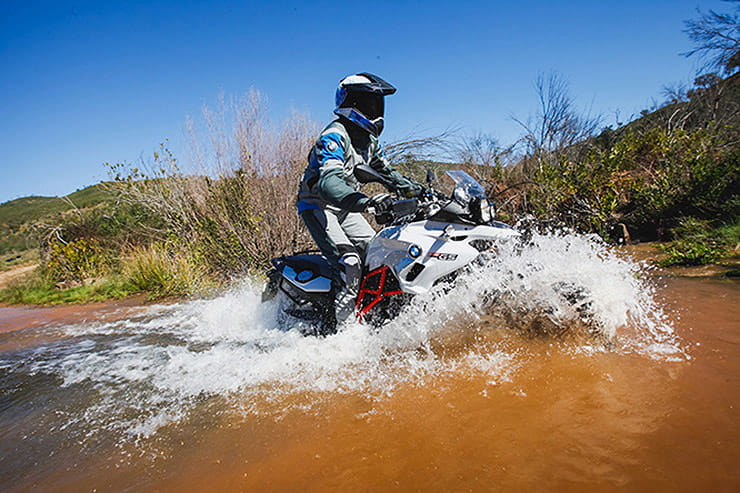 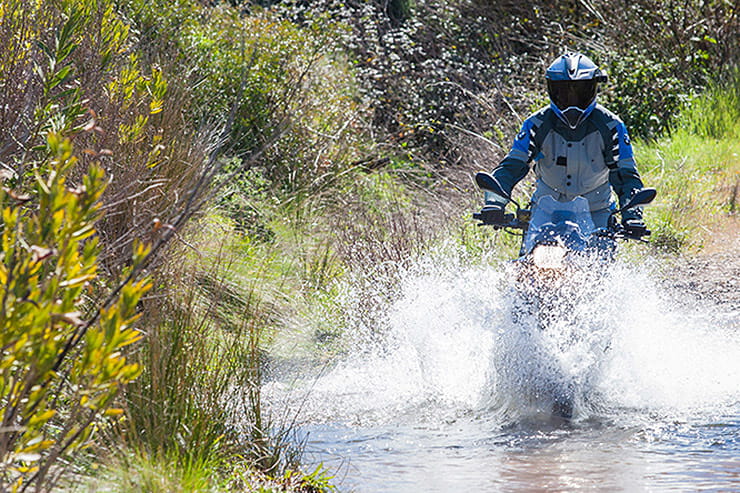 Although both the F700 and F800GS share the same basic engine architecture and 798cc capacity, the ‘smaller’ bike has noticeably gentler performance due to its ‘softer’ cam profiles, resulting in 75bhp and 57ft-lbs (the original 2008 F650GS was even softer with just 71bhp) compared to the 800’s peaks of 85bhp and 59ft-lbs. This difference is further emphasised by being available as a restricted version for those with an A2 licence (although, for clarity, F800GS is too). The result is an ideal confidence builder with smooth power delivery and a light clutch. The 700 does need encouraging through its rev range accelerating out of a slower corner, feeling a little restricted down low so if you’re in a hurry be prepared to drop a gear to get the bike going instead of relying on the mid-range torque

With 10bhp more the F800 is noticeably sharper and punchier and its 85bhp and progressive delivery is ample for most situations both on and off-road. Only when fully laden two-up or on particularly long motorway tours does the larger R-GS become preferable.

While the obvious difference in name between the two bikes would suggest a 100cc difference in capacity, actually both the F700 and F800GS use the same 798cc, twin-cylinder, liquid-cooled engine, though the 800 has 10 extra horses; 85 v. 75bhp. On the whole this has proved durable and reliable and, despite the 700 in particular, being slightly built to a budget, is fairly well finished. The gearbox is a fairly typical six-speeder with overall ratios slightly differing between the two, while final drive is by chain – at the time a first for the F-series as the earlier F800S and ST had belt final drive. This may be a subject of derision for fans of the bigger R-GS, which has historically always been shaft-driven, but it helps keep the F bikes light and manageable. There was a recall over the chain with early examples of the F800GS but this should have been rectified by now. The exhaust is a fairly conventional, high-exiting dirt-style two-into-one, usually in stainless steel with few reported problems, although some owners fit aftermarket cans. 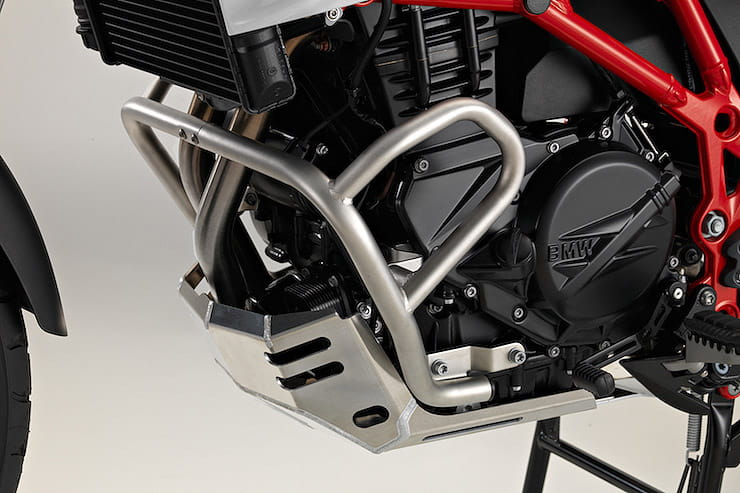 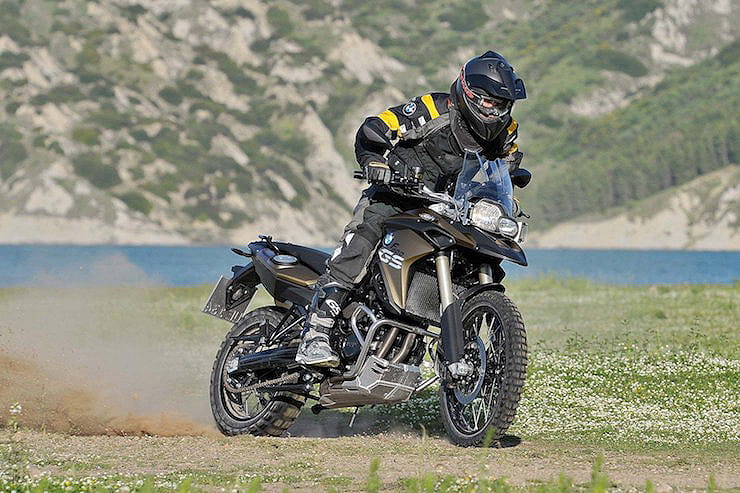 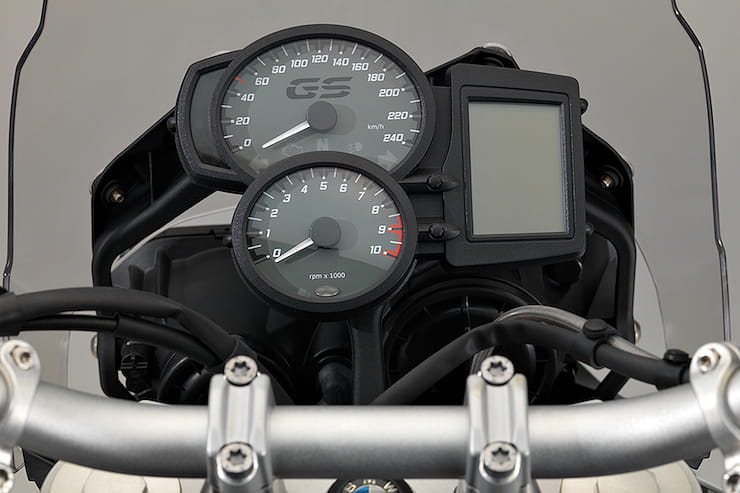 Most BMWs are pretty good at being fuel-efficient and the F800 series is no different while being a twin and a fairly lightweight machine helps, too. You should easily expect a return of around 50mpg on both variants, with probably more on the softer tuned and likely more gently ridden 700 so much so that 60mpg+ isn’t out of the question. The 800 is more likely to be in the mid-50s unless ridden particularly hard, heavily laden or greatly off-road.

With their slim, light, tubular steel trellis frames both variants are nimble and easier handlers. On the road and despite its 10bhp deficit to its larger sibling, the 700 feels that bit sportier due to its lower suspension, smaller cast front wheel and more road-orientated tyres. The seating position, lower than the 800, encourages the rider to sit flush against the tank making cornering nimbler and the 5 fewer kilograms noticeable.

Through the faster turns and the F700GS holds its momentum well with a good sturdy feel from the suspension and with a special shout out to the engine braking which offers effective deceleration off the throttle, as smoothly as it accelerates.

The F800GS has a much greater off-road bias than the 700 with its wire spoke wheels instead of the 700’s cast versions, the front being 21” v. 19” on the 700 while its beefier, upside-down suspension with longer travel, plus extra height give the 800 an advantage on non-Tarmac surfaces – so much so that’s it’s a significantly better off-road choice for most than the 1200 or 1250. The 800 also comes with dual-purpose Pirelli Scorpion Trail tyres which work decently in the dirt while still offering a reassuring feel on the road. 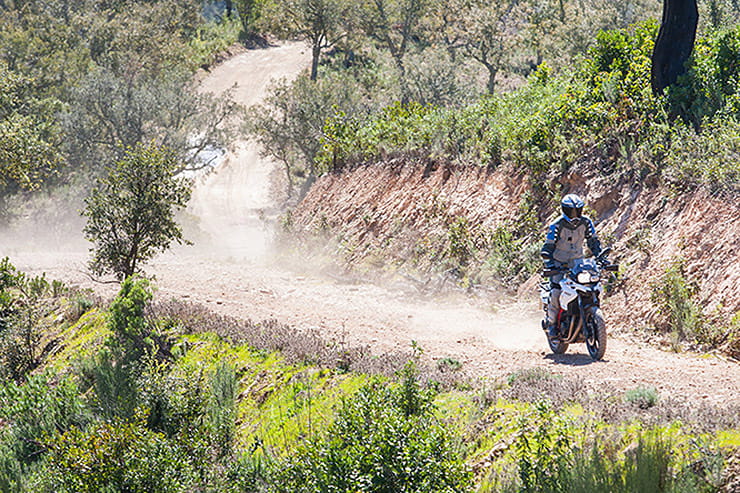 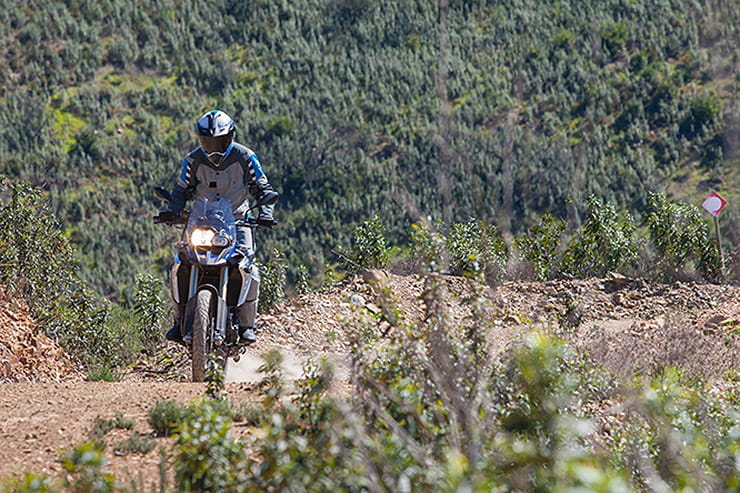 Both bikes feature big 300mm twin discs grasped by dual twin-piston calipers. They offer plenty of stopping power, too, proving delicate enough on gravel yet sturdy with plenty of force put upon them on the road.

In line with the BMW’s ‘Safety 360°’ principle, the F 700 GS and F 800 GS are fitted as standard with a ABS while other safety-related features are the optional Automatic Stability Control ASC and the Electronic Suspension Adjustment ESA.

Both F-GSs make decent tourers with excellent riding positions and decent saddles with comfort options available and, particularly since 2016 a variety of optional seat heights. For sheer comfort, however, unless you’re particularly short and inexperienced, the taller, roomier 800 complete with taller screen is preferable. There’s plenty of space from hips to toes while the skinny seat and seat height options provide a combination suitable for all riders. Even the standard fly screen offered plenty of protection. Shorter or female riders may however prefer the 700, which offers a range of seat heights from 765mm – 860mm and a lower suspension option catering for riders of all shapes and sizes.

Although only the more recent F750 and F850GS get the latest fancy colour TFT screen and extra electronic riding aids, the older bike is still a fairly premium place to be with ABS, hand guards and the options of heated grips, on-board computer, ESA, luggage and much, much more. Just sitting astride each of the F-series bikes you get a reassuring sense of build quality. When buying used, however, it’s crucial you assess the worth of any extras and accessories. Luggage, comfort options, cosmetic goodies and more can hugely add to the bike’s appeal and, in a used transaction, can be yours for a song. 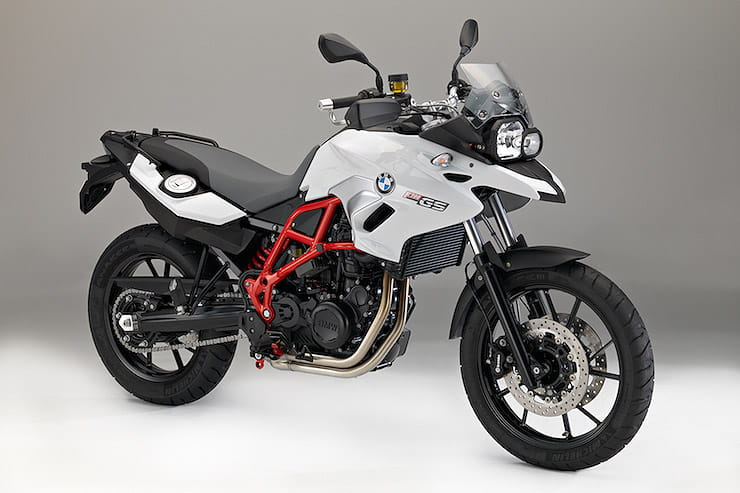 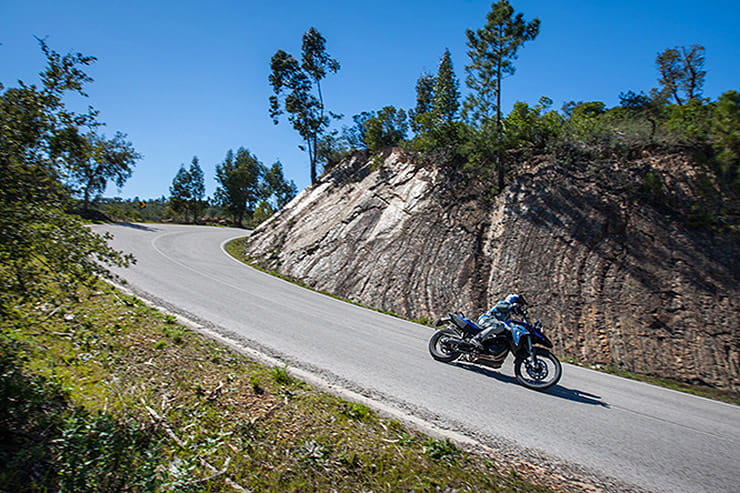 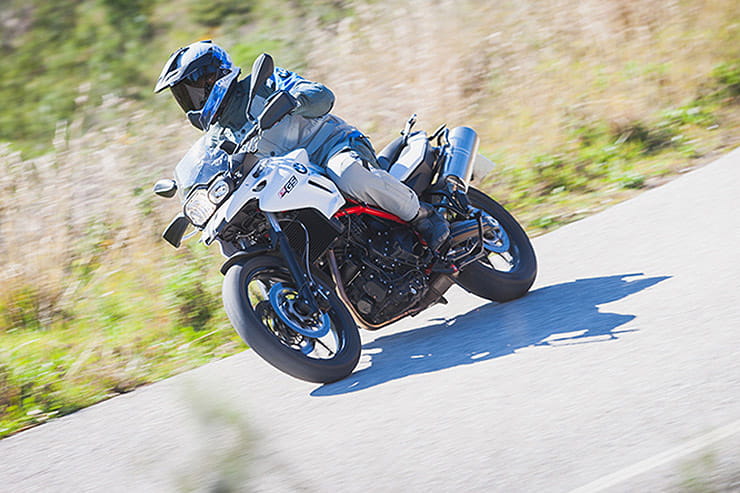 Both the F700 and F800 GSs are really well suited as first adventure bikes and even as commuters and thanks to their lightweight manoeuvrability, they’re more than capable of handling a bevvy of situations; touring, commuting, A-roads, B-roads and carrying a pillion, handling all with relative ease and enthusiasm.

Raw novices or those wanting a lighter, lower, more manageable option should look to the 700 while more long-legged types or those genuinely wanting to venture off-road should aim for the 800. While they’re not going to set the world on fire with the performance capability, they certainly tick many other boxes with their combination of comfort, accessibility, build quality and levels of equipment.

Three things we love about the GS…