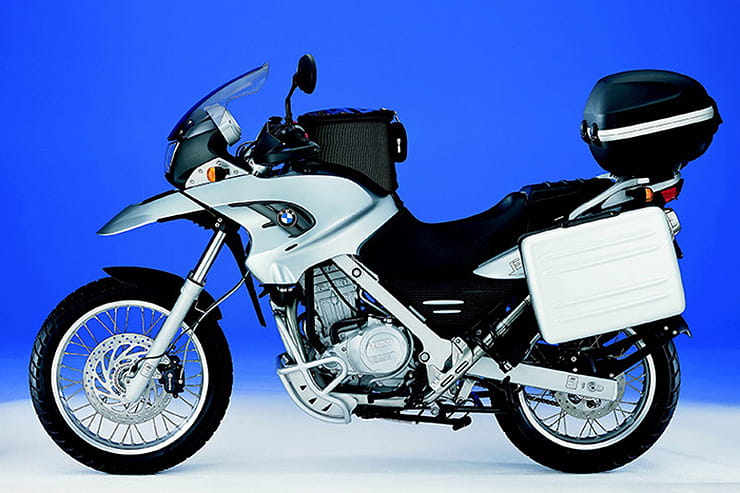 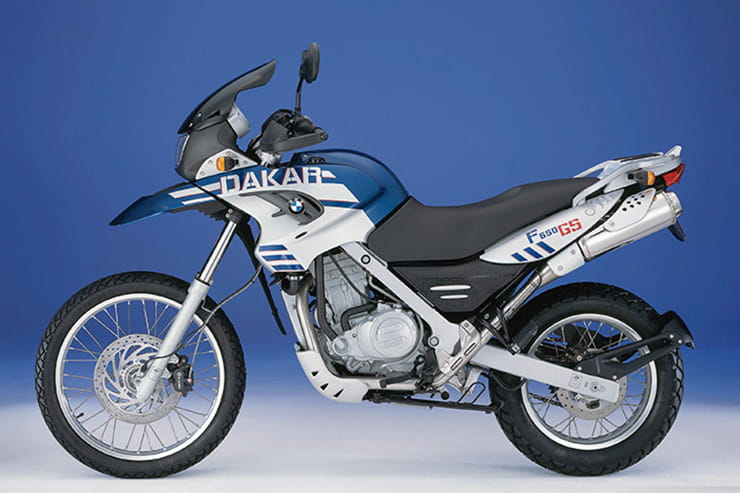 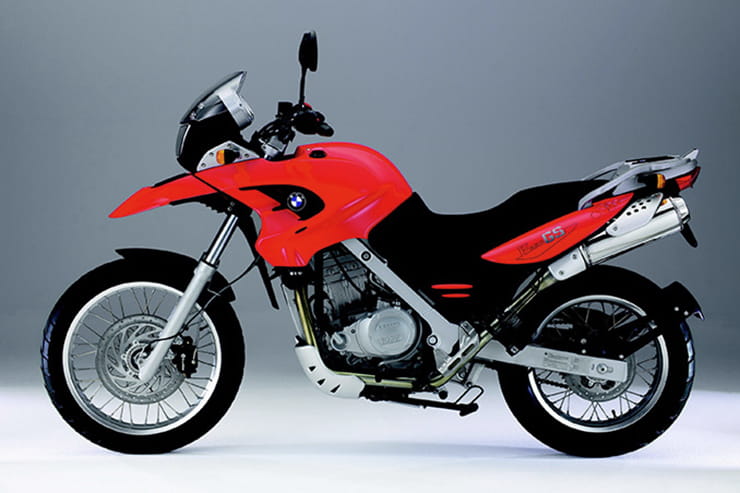 The F650GS and F650GS Dakar are two bikes that punch well above their diminutive single-cylinder stature suggests. From world-adventuring to hacking through commuting traffic, these unsung heroes of BMW’s 2000s model range have done it all. And far more besides. If you are after a rugged commuter that is more than happy to take to the green lanes at the weekends, or even pop over to the deserts of Dakar for a month or so, the F650GS is the bike for you. 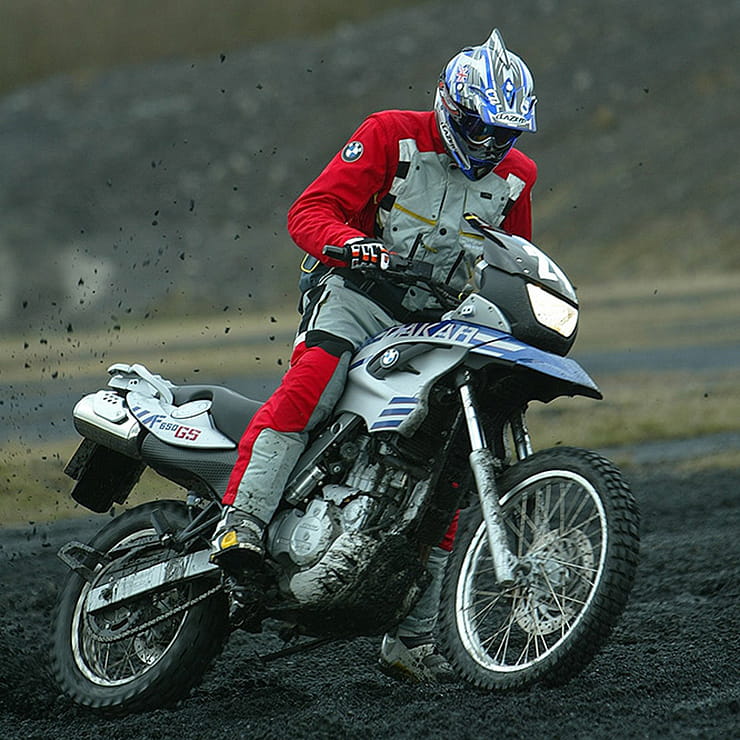 The F650GS’s story starts in 1993 when BMW unveiled the F650 Funmoto. Powered by a Rotax-designed engine, the F650 was actually a joint collaboration and was built by Aprilia in Italy for BMW (Aprilia’s version of the same bike was called the Pegaso), and it is this machine that formed the basis of the F650GS. Still powered by a Rotax engine, the 2000 F650GS saw the 652cc single completely refreshed and fitted with a new fuel-injection system to boost both power and fuel economy. Despite being a single cylinder, the GS’s water-cooled motor is actually pretty advanced and comes with a Nikasil-lined cylinder for reduced friction and improved longevity while the head features double overhead cams and four-valves at a point when many singles had just the one cam. Producing 50bhp with 44ftlb of torque, the GS runs a dry sump lubrication system with a five-speed gearbox. 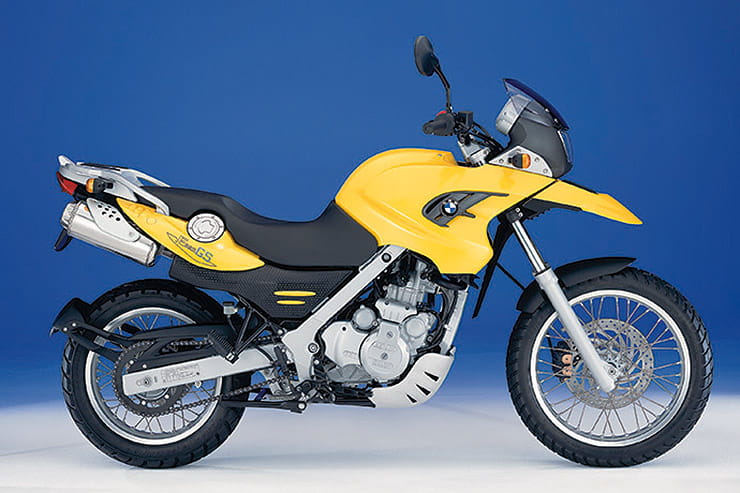 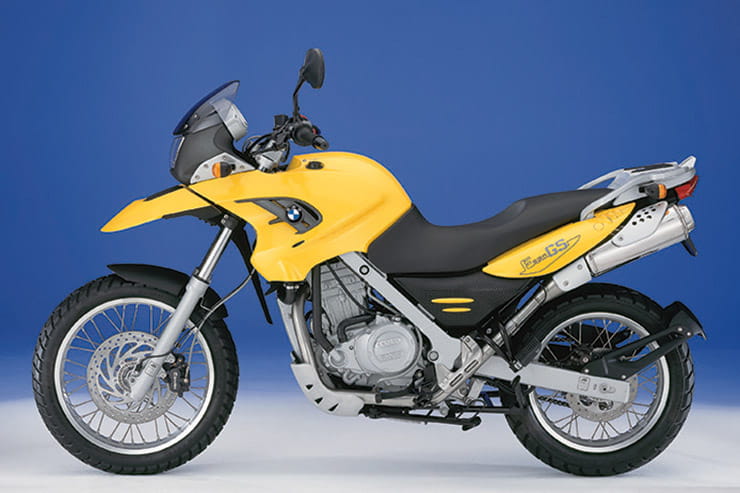 A steel bridge tubular frame gives the GS a rugged look, however unlike some other dry sump off-road style bikes the engine’s oil isn’t stored in the frame and instead is housed in a separate oil tank located where the petrol tank is conventionally positioned. Where is the fuel? BMW tucked the fuel tank under the GS’s seat, something that means the fuel filler is located on the side of the bike’s tail unit. This odd positioning helps lower the GS’s centre of gravity and makes for better feel and agility in an off-road environment as well as helping keep the seat height to a low 780mm. Where the standard GS has a 130/80-17-inch rear wheel and 100/90-19-inch front, the Dakar version has a larger and skinnier 90/90-21-inch front wheel to give it better off-road focus. As well as increasing the bike’s wheelbase by 10mm, this also increases the Dakar’s seat height to 870mm, 90mm taller than the standard GS.

There isn’t much to shout about when it comes to the GS’s suspension and it runs fairly basic non-adjustable 41mm conventional forks with a monoshock at the rear that features adjustable spring preload and rebound. Due to its off-road focus, the Dakar has longer travel suspension than the stock GS with the front given 40mm more travel and the rear 45mm more than the stock bike’s 170mm front and 165mm rear. 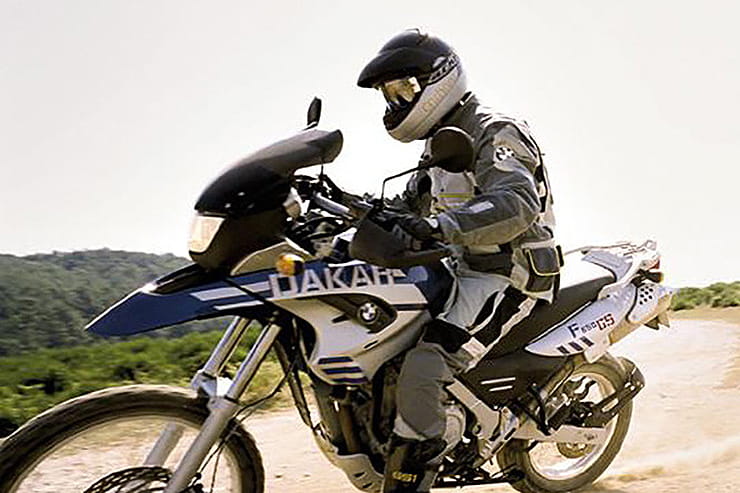 Again, we are talking pretty basic here and both F650GS models feature a single 300mm front disc with a two-piston sliding caliper and a 240mm rear disc with a single piston caliper. ABS was an optional extra throughout both model’s live span.

Aside from ABS and a fuel-injection system, there are no flashy electrics. As with so many BMW models, heated grips were a factory-fit optional extra and so was a plug-and-play alarm system. 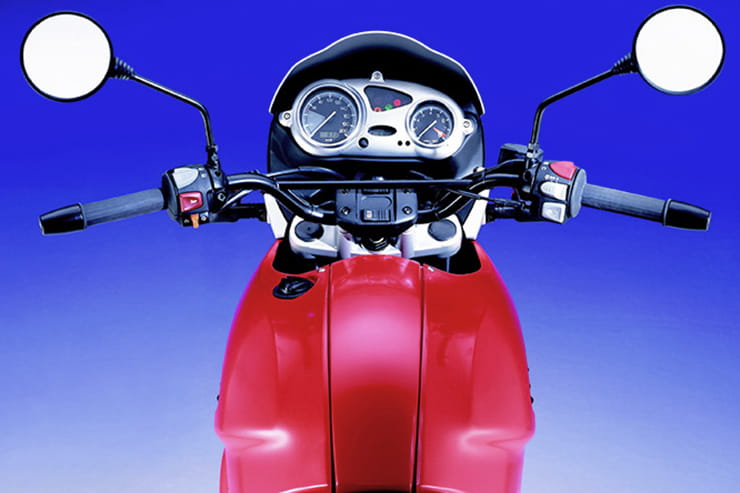 Shorter riders really like the GS as it has a low seat height (an even lower model was available) and its low weight makes it reassuring for those less experienced. However if you are a taller rider you may find the GS a little too small as despite its upright stance, it isn’t the biggest bike in the world.

The GS’s luggage rack has two pillion grab handles, which is good, and the seat is well padded, however the single’s lack of power does mean that your two-up progress will be somewhat slow. It’s an ok pillion bike, but if you are planning on a lot of two-up riding, look at the updated 2008 parallel twin model, which is confusingly also called the F650GS even though it's actually an 800cc!!!? 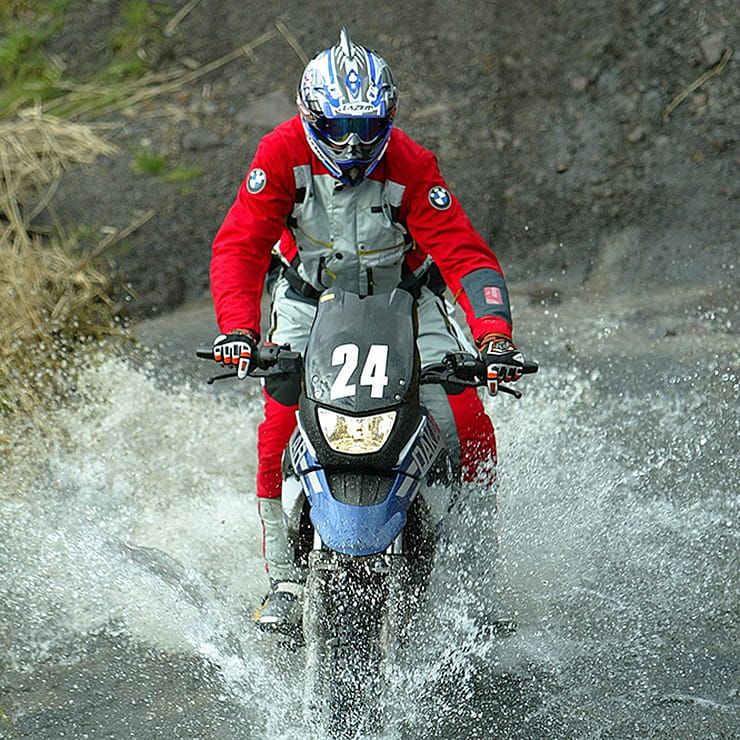 Powered by a 652cc single-cylinder engine, the F650GS delivers ample torque and power in a short rev range that will not worry anyone. For this reason the F650GS made an excellent spring board from learner ranks to bigger adventure-based machines. The funny thing is most owners of F650GS kept them to use as an everyday commuting tool when trading up to bigger capacities. Yes, the little BMW is that good.

Being a single-cylinder machine it does object to being revved hard with vibration and an early dive at the rev limiter. More than an hour spent with the F650GS is enough for riders to learn that most of its punch is concentrated low down in the rev range.

It’s not uncommon for the F650GS to bang its way up and down the gearbox but can be quietened down with a correctly tensioned final drive chain. This isn’t as easy as it sounds because the suspension is quite softly sprung and suspension travel quickly reduces any slack in the chain. Another result of soft suspension is the poor feel for what the tyres are doing and substantial dive with front brake use.

Comfort is also a strong point of the F650GS. In excess of 250 miles can be achieved without any real aches, but all riders will benefit from a taller screen to ease upper body pressure and that’s from a bike where the rider sits in the bike rather than on top of it. Because of the F650GS length of service there are reams of aftermarket accessories still available. Panniers or top box are the most common items and make a welcome addition when it comes to buying a F650GS. 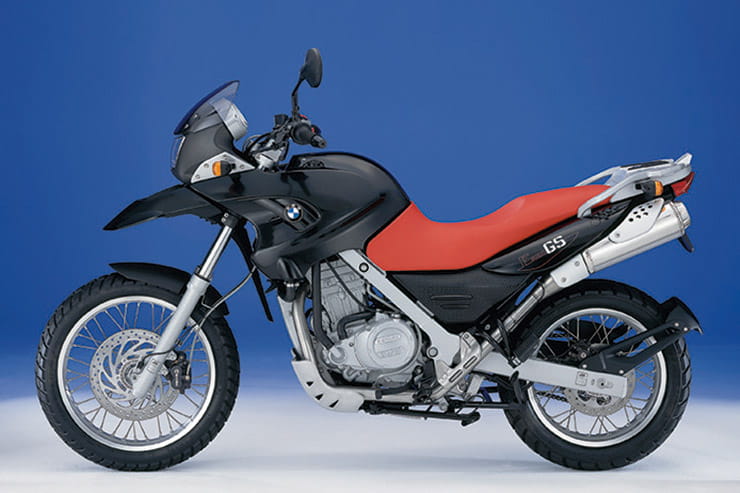 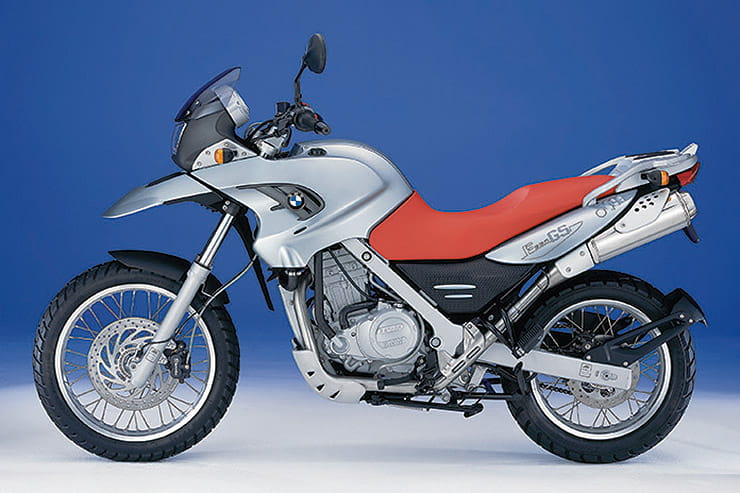 With such a plethora of quality used middleweight bikes on the market, it is quite hard to really recommend anyone buys what is an 18-year-old fairly basic bike for a commuter as it will be somewhat tired by now. However, that said, the F650GS will certainly suit some riders.

If you are after cheap, and lightweight, off-road styled bike the GS is a good option. It’s not as aggressive as the Yamaha XT models an has far more about it than the Honda Transalp. However where the GS really shines is the fact it can genuinely be taken off-road and laps up green lane riding. If you can find a Dakar model, which is rarer than the standard bike, it’s a great machine to have in your garage for short hop commutes when you want to keep your better bike nice and tidy and hammering up the muddy paths when you feel like playing the world adventurer. Treat the F650GS as a reliable workhorse that can be enjoyed off-road and you won’t be disappointed, however try and force it into long commutes and its single cylinder’s vibrations and lack of performance will leave you frustrated.

The F650GS is a pretty old bike now and there are a lot of tired examples out there, so you tend to get what you pay for. If it looks tidy and well cared for then you should be safe, but a battered hack is best avoided.

When it comes to reliability there are a few things to be wary of. The water pump is driven by plastic gears, which are known to snap, and the pump itself also pops seals. Inspect the housing well for any signs of leaks and on a test ride see if the bike shows any signs of overheating when stationary that may indicate a duff water-pump. Neither is a major job to fix, but they can leave you stranded and possibly even cause damage to the bike. The GS’s vibrations and off-road nature see it eat bearings, so always inspect the head and wheel bearings, and also give the sprocket carrier a good look over and wiggle to see if there is play as its bearing is also a weak point. Early GSs had a smaller nut on the gearbox output shaft that holds the drive sprocket in place, which can work loose. Swap it for a later larger nut to be on the safe size. A few owners have experienced wiring loom issues (and the occasional fire!) so check all the lights etc work and pay attention to the indicators as they like to corrode and stop working. Aside from a good check over for rust on the frame and corrosion/broken spokes on the wheels, it’s the usual used bike checks, however as it is a single, look for smoke on start-up and ensure the motor is cold before it is started as canny sellers warm it up before hand to stop excessive smoke!

Be a little wary as a few GS’s were restricted down to 34bhp with 37ftlb of torque to meet licence laws, so if a GS feels slower than normal this may be the reason. Happily the kit is easy to remove…

The F650GS was released in 2000 and was updated in 2004 with a new twin-spark engine and a refined engine management system (BMS-C II). This update boosted the GS’s fuel economy by a claimed 6% at 56mph to 88mpg while at 75mph it was 14% better at 65.7mpg. Peak power and torque figures were unaltered but the maximum torque was lowered in the rev range. Visually the 2004 GS gained a new front mudguard that was similar in design to the R1200GS’s unit, new screen and larger headlight while the luggage rack was improved to allow a top box to be fitted without the interim plate. A power socket was also added as standard. The Dakar model received the same updates as the stock GS.

Prices for an early F650GS start at £1500, which will get you a bike with over 30,000-miles on its clocks but in a reasonable condition. Pay closer to £2000 and you can half this mileage to into themed-teens, which is a better option for not much outlay. A Dakar, which tends to be the more popular model, will cost you upwards of £2,000 for a well used one and closer to £2500 for one which has seen less action. If you want panniers (a good option) expect to pay about £300 more for a bike with them fitted with your maximum outlay likely to be less than £3000 for a F650GS and £3500 for a Dakar. 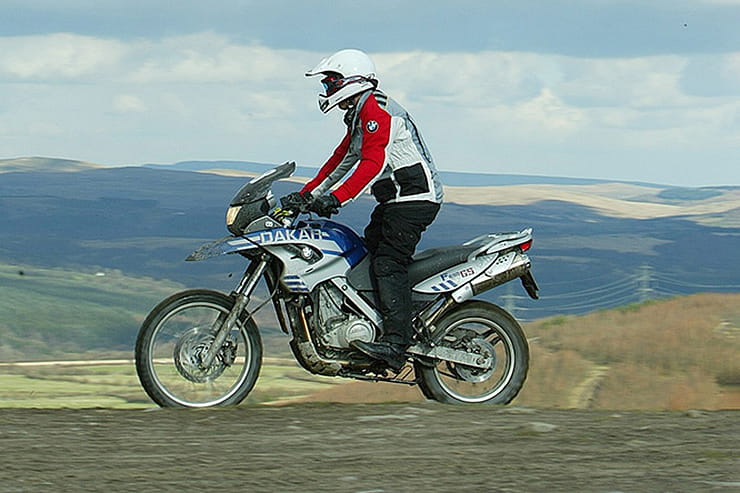