1) It’s all about the engine

The mechanics and the experience don’t add up, which is what makes this motor all the more special. In theory, it’s a big, low-revving, twin-cylinder lump more at home in adventure bikes or tourers, from a company that just ten years ago was known for making sensible, heavy touring bikes.  So how come this thing revs so quickly, has the lightest, quickest throttle response of almost anything out there, and is sporty enough to be averaging 38mpg from a bike that should be doing at least fifty.

I don’t understand it, but I do like it… a lot. Somewhere inside that innocuous plastic throttle tube there are a load of noughts, ones and volts controlling what is essentially a well-engineered flamethrower in such a way that it makes this daft, old bloke giggle like a schoolboy every time I turn it.

The clutch is light, gearshift slick and there’s both enough top speed to make motorway cruising easy and enough acceleration to justify being in the sporty bit of BMW’s catalogue. This engine might be the same layout as BMWs of old, but between the shift to four valves, adding cam-chains, water cooling and improvements in ignitions and fuel-injection, BMW has doubled the horsepower and improved flexibility in a single generation

Nineteen years ago I sat in a café on a Swiss mountain with some of BMW’s top brass who told me they were going to move BMW’s motorcycle image dramatically towards a younger market. I was sceptical, but it turns out they were serious. 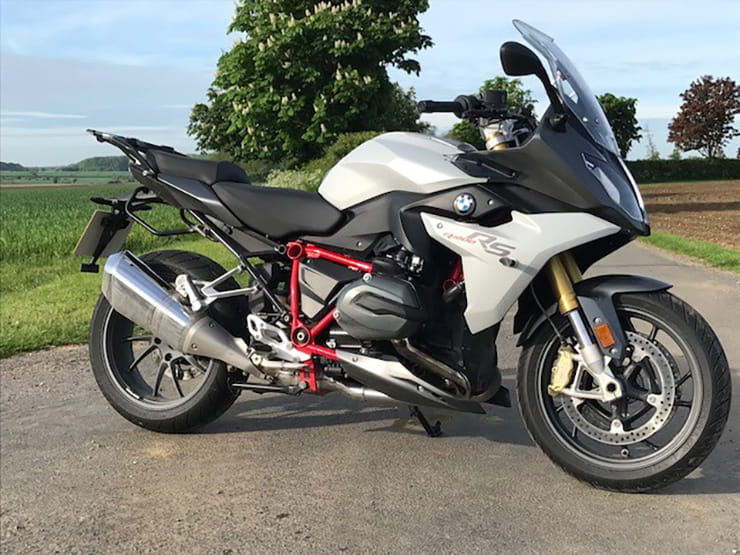 2) And the handling too

This is the first of the mainstream Boxers to drop the Telelever front end. I can see why. When you’re the only one developing it, the lack of competition means your rivals’ systems get better, quicker. Telelever offered a genuine performance advantage on big, heavy touring bikes when launched in 1993 because the lack of dive allowed sharper, more consistent steering (compared to other tourers), and stability with less passenger head-banging as an extra benefit. These days, conventional forks with electronic adjustment have negated much of the advantage. Telelever is heavy and I’m guessing expensive to produce. BMW’s smaller twins and four-cylinder superbikes all use conventional forks so why carry on with Telelever?

I was apprehensive at first. I like Telelever and the unconventional feedback it gives. But the R1200RS steers accurately, soaks up the bumps and feels much lighter on its wheels than other BMW twins. It’s not a quick-steering track addict, but it is one hell of fast and stable roadster. 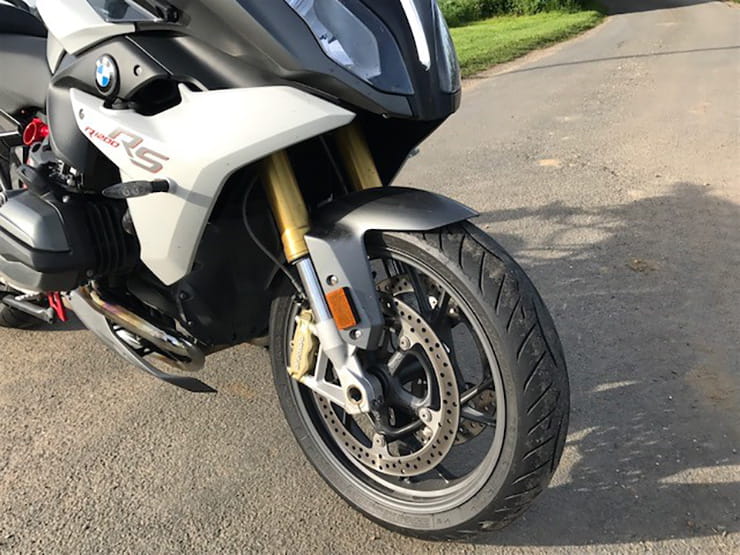 3) The gizmos are good

BMW’s heated grips are the best, no question. The nuke-em setting gets your hands too warm too quick and then you back off to the regular setting to maintain a comfy glow. I was nervous of the keyless ignition, partly because it also operates the fuel flap, but mostly because I’ve never used a key and thought, ‘I wish someone would replace this with a battery-powered electronic device that will one day fail and leave me stranded.’

It turns out the fuel flap thing is what sets this system apart because now, you genuinely can leave the fob-thing (a technical term) in your pocket all the time. Even the steering lock operation is electronic.

The safety electronics (traction control, cornering ABS and riding modes) are working well in as much as I don’t know they are there and have yet to lose either traction, grip or wheelie uncontrollably into the distance. I haven’t tried playing with them yet, but I like the idea of being able to program a ‘user setting’ with all my favourites. 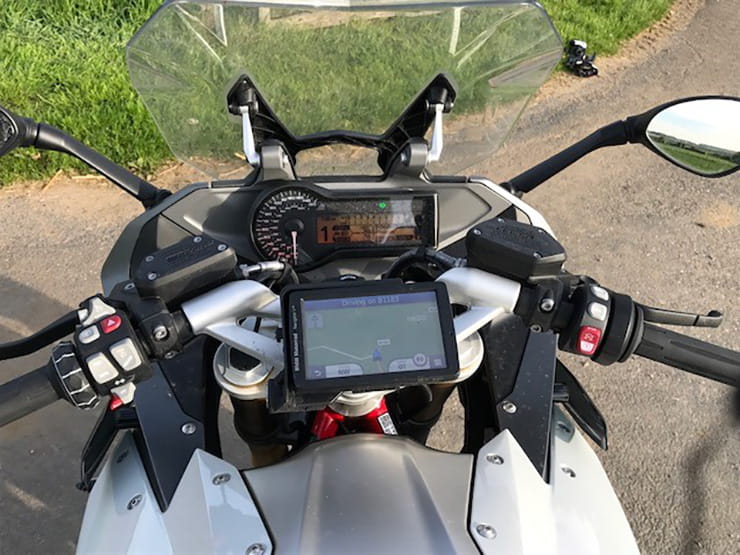 4) But the dash is difficult

How did they make it so confusing? The enormous analogue speedo only has numbers covering half of it, meaning they are cramped together and difficult to read in a hurry. The digital tacho has tiny markings and is difficult to read. There are too many chunks of info presented in too-small type, so I have to take my eyes off the road for far too long. The only item clear on the dash is the enormous gear indicator

Then there’s the switchgear. It looks like button-pox. Too many switches, too many options and some weird wheel that I haven’t even touched yet. I could just about cope with that but few of them are in the right place to be accessible. The indicator switch is a few mm too far away, the heated grips switch can’t be operated by thumb or fore finger without closing the throttle… not enough thought has gone into the functionality.

There is an option to customise the display into less-cluttered ‘sport’ or ‘tour’ options, but they still don’t have some of the info I need... I think. I need to spend more time with the 225-page owner’s manual.

Truth is, this is a bike that, as an owner, you need to spend some time with, digesting the manual, playing with the settings and making it your own. There are dozens of options and, unlike a few years ago, the tech works well enough now to be worth the bother. 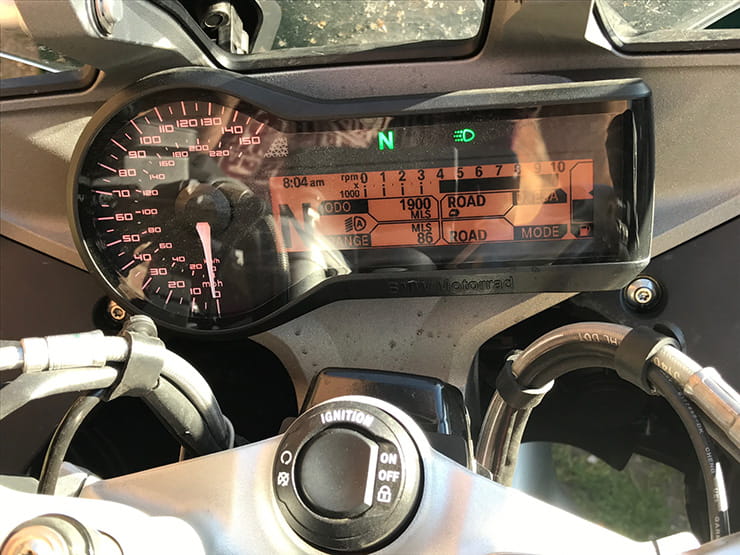 5) Electronic suspension is finally worth having

Early versions of BMW’s ESA electronic suspension were disappointing giving owners a choice of too-soft and saggy (road), even softer and saggier (tour) or one competent setting (Dynamic) that was usable. This R1200RS came set on ‘Road’ and it’s so controlled in corners while still soaking up bumps that I hadn’t tried the others until someone borrowed it and left it on ‘Dynamic’, which appears to be no different. I’m still not sure whether electronic adjustment is the future, and the Frankenstein-look of the wire sticking out of the fork top looks a little too medical for my liking, but I guess it means no more seized mechanical adjusters. There’s a pattern forming here. Astute readers will notice that so far, I’ve not really tested many of the features on this bike. That’s intentional… honestly. I want to get familiar with the base settings and then start tweaking. It’s the benefit of a long term test. On a conventional week-long road test these would have been niggles, on a long term test we’ll get to know if it’s me or the bike. 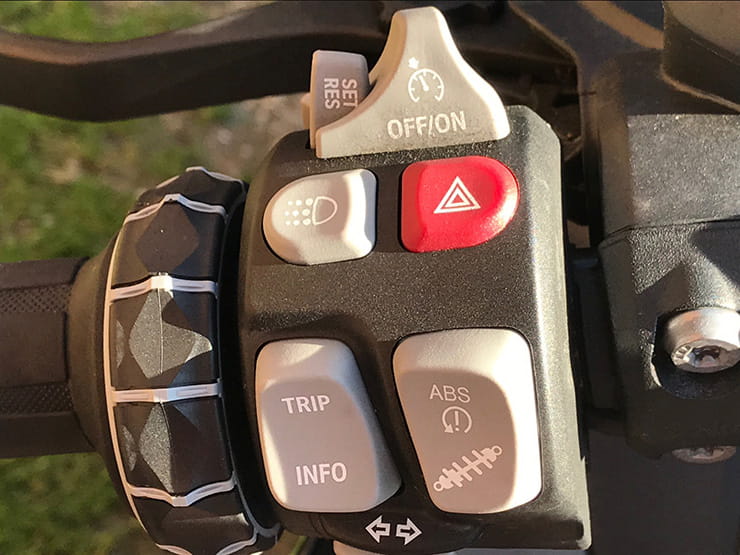 I really think I want one of these, as in ‘buy one with my own money’. To date, three out of four BMW twins I’ve owned have been GSs. The other was a briefly owned R1100R (too good a deal to pass up). I’ve also been lucky enough to have a couple of GSs on long term test and an R1200RT. I like these bikes enough to have spent my own money on several occasions, but, where in the past the GS was the standout option, these days it’s got some competition.

This R1200RS appeals because in theory it has all the joy and wahay of that brilliant water-cooled motor, the ease of use and sophistication of BMW’s shaft drive, but with less weight than a GS (especially once they’ve had half the overland accessory catalogue bolted on), none of the top-heaviness and a slightly sportier personality.

Right now I think I made the right choice. There are some questions about the riding position (not quite as comfy at lower speeds as I was expecting), reservations about the switchgear and a lot of ‘looking-forward-to-getting-to-know-you-better’ challenges with the electronics. 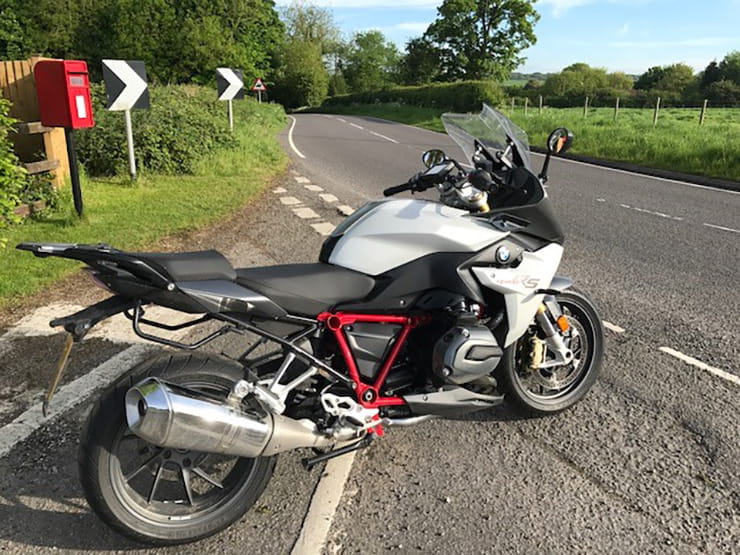 7) Until then, let’s just enjoy it

Because, testing aside, I just look forward to getting on it and riding it every single day. We’ve done 1500 miles in fifteen days and as a motorbike – one of those weird machines that make people like me go doo-wop – I just love it.

And I am determined to get to grips with the tech and make this the summer I join the 21st century. This bike should be the perfect partner for that. Truth is, I can’t wait.