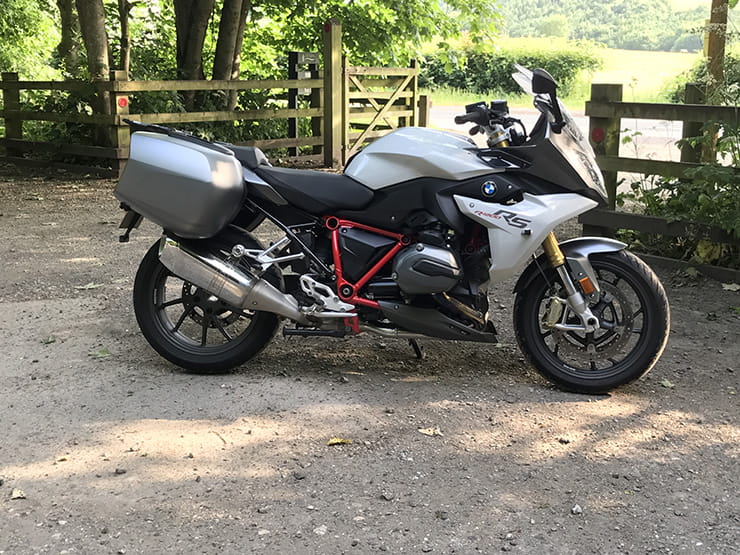 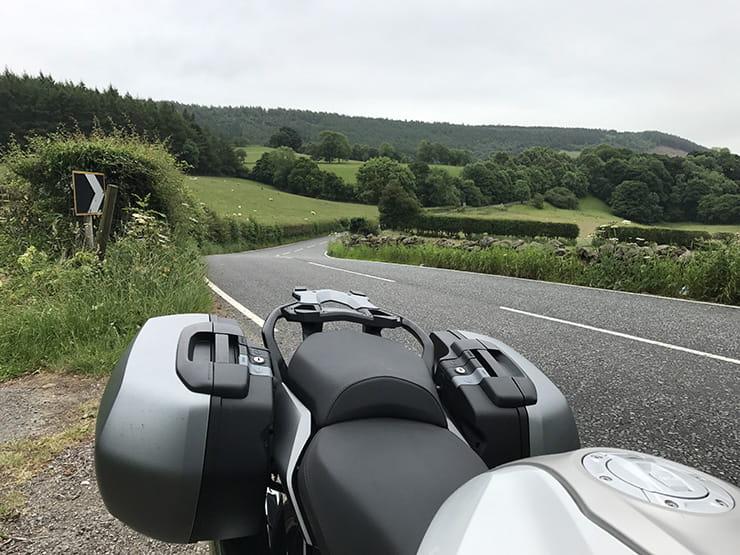 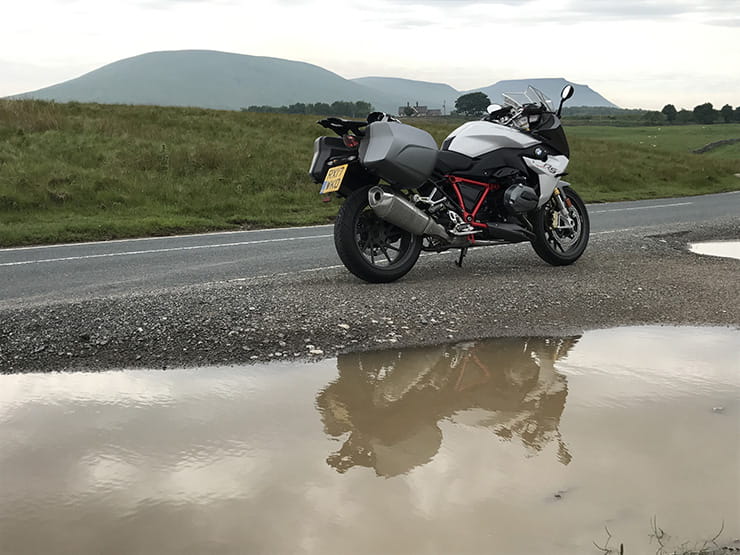 If in doubt…check the obvious.

It’s easy doing miles on a bike you love. Need to pop to the next county to drop off a frazzled laptop? Easy…I’ll take the bike…be back in an hour. A meeting? This afternoon? At Leeds Castle? Oh, the one in Kent? I’ll be there by 1.30.

I really do love this bike, more so since the luggage arrived from BMW. A pair of compact, but spacious panniers – simple to get on and off the bike, enough room inside for waterproofs, lunch and a small laptop in a padded bag, narrow enough to have minimal impact on filtering. 5000 miles in less than three months tells you all you really need to know. In that time, it’s used no oil (a major difference from the air-cooled boxer motors) and the Metzeler Roadtec tyres still have half their tread left.

I must remember to check the brake pads though. For some reason, I’m braking much harder on this bike than normal. Not sure why, just that we’ve had a lot of dry weather and my personal curiosity has been pricked about why I don’t brake better. Normally it’s because I look a long way ahead, use the throttle to control speed and barely brake at all. This summer I’ve taken to braking like it really matters. I just fancied a change and the R1200RS has brakes, suspension and a chassis that seem to enjoy this kind of juvenile behaviour. 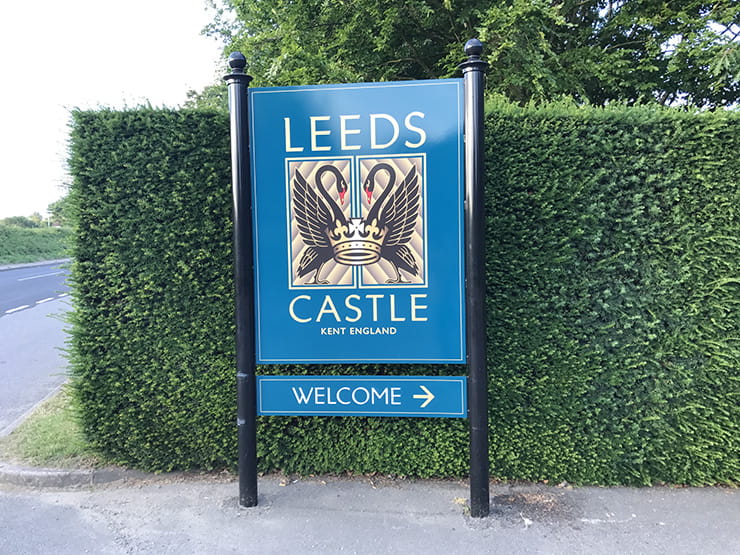 There are a still a couple of niggles. Firstly, the quick shifter is awful. Stiff, clumsy and every change, up or down feels like it’s taking another few teeth off every cog. I know this is a test bike and I should just get on with it, but it will also be sold to some wide-eyed customer at the end of the year, expecting their well-maintained, ex-factory machine to be immaculate and it makes me cringe every time the quick shifter forces home a gear that wasn’t expecting to engage. Besides, the actual gearchange on this bike, done manually is so slick and smooth that every clutch-assisted brush of the lever actually adds to the riding pleasure.

The other issue has been more confusing, but simply sorted (in the end). On wet, bumpy roads I didn’t have anything like the confidence that I had on other BMW boxers that I’ve either owned or run as test bikes. I like riding in the wet. There’s a challenge getting a bike home quickly in difficult conditions that appeals to my wonky mind. But the R1200RS lacked the feedback from the front end that gives confidence on slippery surfaces. It felt like someone put 100psi in the front tyre, 18psi in the back and replaced the fork oil with treacle. It felt like my old  hardtail chopper. 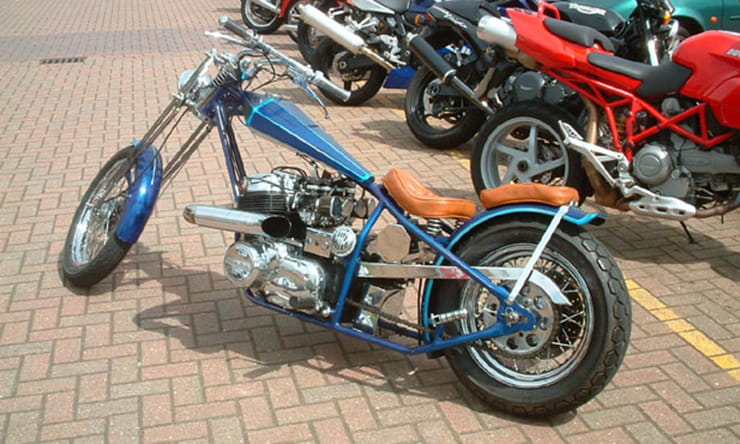 Normally I’d say ‘tyres’ but I’ve ridden Metzeler Roadtec Z8s in the wet with no problems and those on the RS still had tons of tread left. The geek in me started theorising about how BMW swapping  their Telelever front end for telescopic forks on the RS was the cause. One of the biggest advantages of Telelever is that it separates steering and suspension meaning you can attack bumpy corners in a way that conventional forks can’t. Also, the Telelever’s steering geometry and wheelbase remain constant under acceleration and braking which allows BMW to run a sharp steering-head angle, minimal trail and a (relatively) short wheelbase for faster turning, but also gives consistency when cornering because the head angle and trail barely change. The ‘sporty’ RS has a 1530mm wheelbase which is 40mm longer than Honda’s ST1300 Pan European and 45mm longer than the touring R1200RT. Plus the RS has a lazier steering head angle than the RT and a lot of trail. Couple that with the low centre-of-gravity of a boxer engine (which already makes it harder to turn), stiffly-damped sporty suspension and shaft final-drive (which needs more rider input to make it turn) and it was easy to convince myself that this was why the RS needs plenty of rider involvement to corner in the dry (which is fun) and why it was so numb in the wet (which is not). 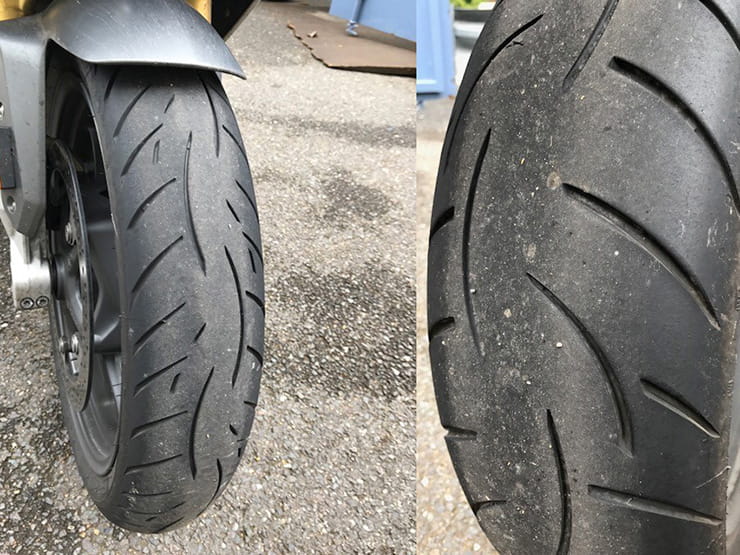 So, after boring anyone in earshot with my clever theory, I decided to change the tyres anyway because even in the dry, the steering was getting harder. On went a new set of Dunlop Roadsmart IIs and, embarrassingly, the BMW’s handling returned to the sporty, confident cornering I’d been loving so much in the dry and was transformed in the wet to being confident and fun. In hindsight I’d done so many miles in our ‘drier than usual’ May and June that by the time I did a serious trip in the wet, the tyres were probably already square. What a clot.

What’s interesting here is that as tyre manufacturers work hard to extend the life of their products I’m not sure we are actually seeing any benefit because all that happens is we still need to replace the rubber at the same mileage because the squareness spoils the handling, but there’s still half the tread showing. I guess if you do mostly straight-line motorway mileage, you’d appreciate the extra life, but my bike had got to the point where I didn’t really want to ride it anymore and the tyres were so far from illegal that I hadn’t even considered they were the problem.

Anyhow, it’s sorted now and I’m back to taking any excuse to go anywhere on this unsung, but flipping amazing motorcycle.