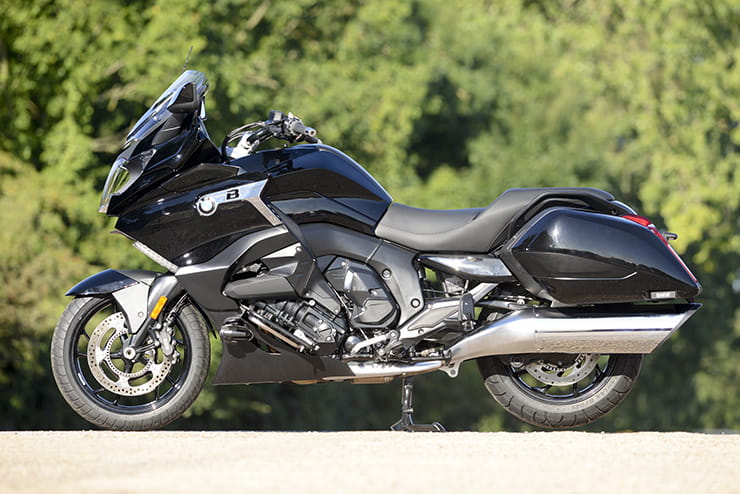 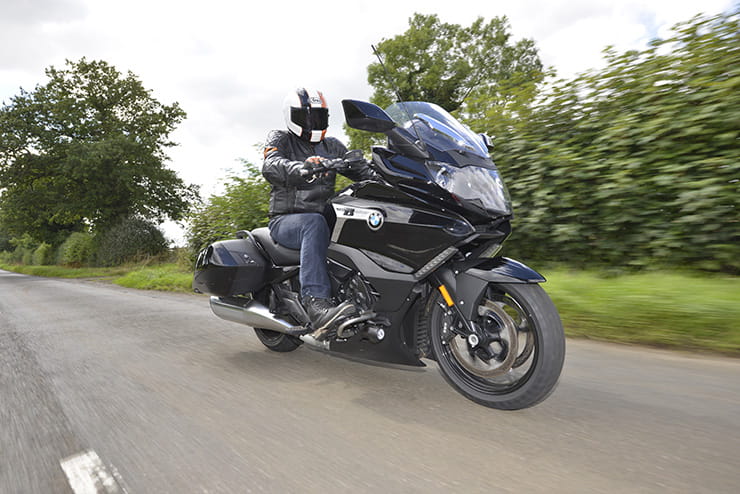 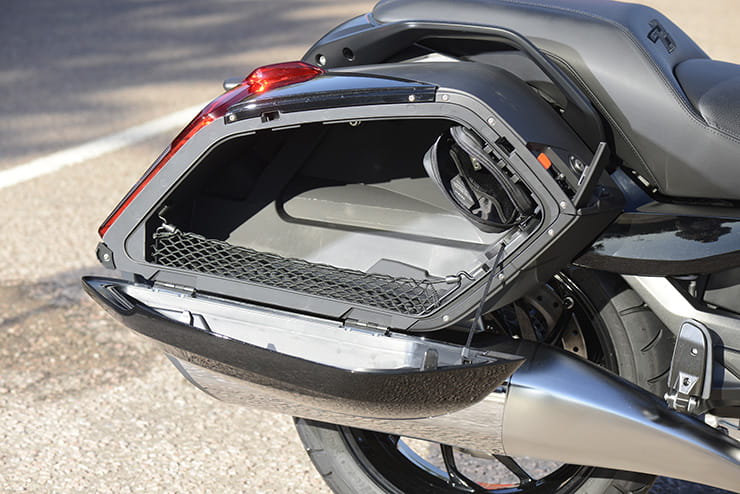 America has a lot to answer for, especially if the orange buffoon nukes us all. But in the meantime we should be grateful for the Stateside fashion for half-cruising/half-touring motorcycles, also known as ‘Baggers’. 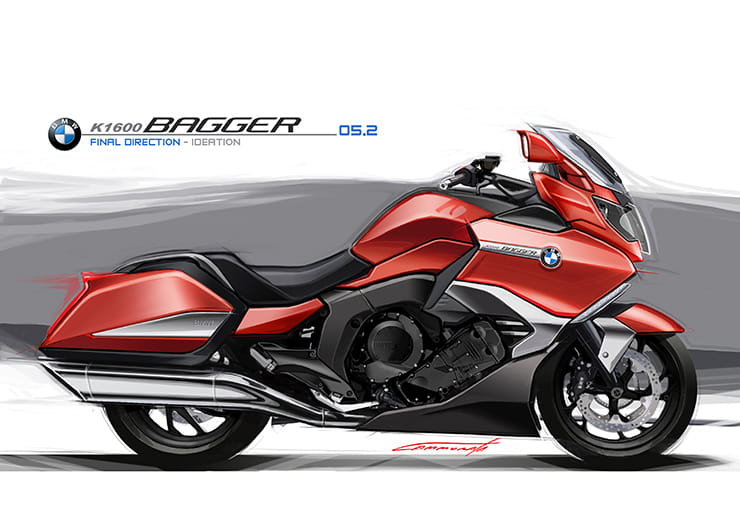 It sounds like a mash-up, but Baggers make for the most practical of cruisers: the half-fairing is lighter than, say, the usual full dress cruiser/tourer, so the bike is less cumbersome and handles better; but it also keeps enough wind off to make the classic cruiser clam-shell riding position tolerable at moderate motorway speeds. Add in the luggage capacity, and you’ve pretty much got a cruising all-rounder. 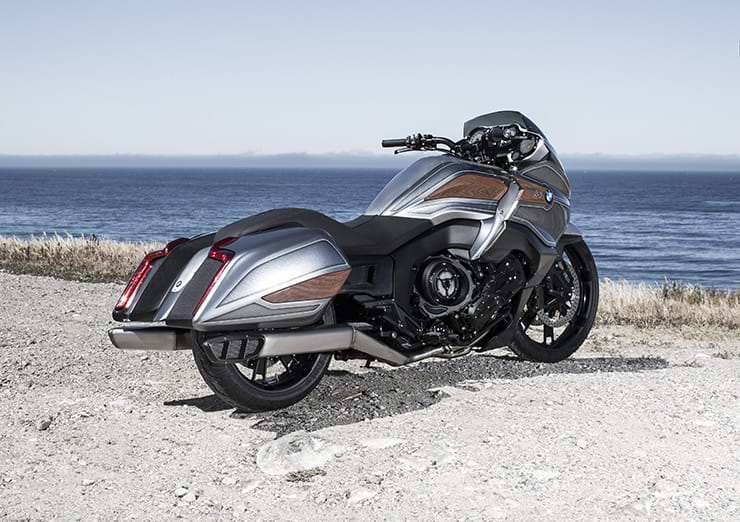 Back in early 2015, BMW got together with noted Californian customiser Roland Sands to create the Concept 101 – a ludicrous baggered K1600 complete with wood veneer panelling. But BMW made no secret of their plan to introduce a production version of the bike, but probably without the timber. And only slightly less ludicrous. 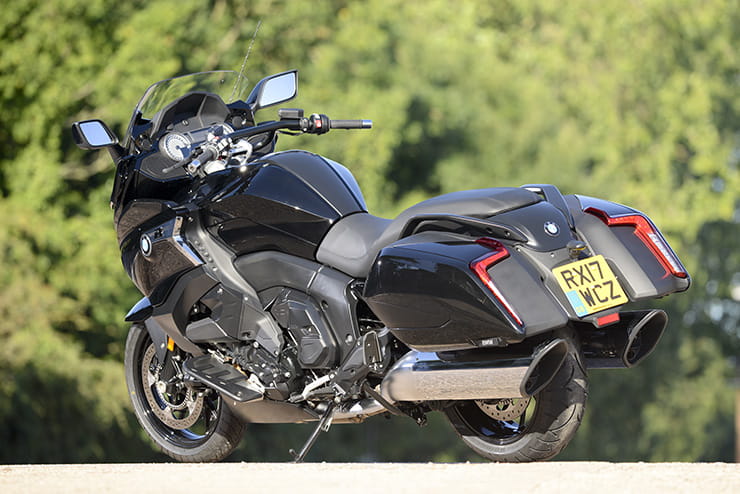 And so in 2017 here it is: the K1600B. It uses an identical-spec 1649cc, 160bhp inline six motor from the more familiar K1600 GT tourer, and an identical frame, Paralever swingarm and Duolever front end. Steering geometry, wheelbase, braking and all other engine management, traction control systems are as per the tourer. Even the 26.5-litre tank size.

The K16B’s differences with the full-dress tourer are an obviously lowered rear end courtesy of a different subframe, a low 780mm seat height (down 30mm from the GT), styled-in panniers (fixed, with incorporated lights), huge megaphone silencers, flat, raked-back handlebars, and an adjustable stubby screen. To help further spec your perfect K1600B, some options from the GT are available: you can fit GT fairing lowers with additional storage space or, if you like the bagger style but want the comfort of a taller screen, the GT item is a straight swap.

The K16B also benefits from the advances and new options on the 2017 K16GT: there’s now a reverse gear, driven by the starter motor, as standard, the redesigned upper fairing deflects wind better and the swing-out fairing flaps are bigger. And the K16B also gets the same optional extras as the touring bike; a quickshifter and autoblipper, keyless ignition, integrated sat nav, stereo, foglights, crash bars, central locking for the panniers, etc. The list, as ever with BMW, is a long one and involves lots of pound signs. But, if you so wish, your already fairly silly K16B can be spec’d to complete excess. What a world we live in. 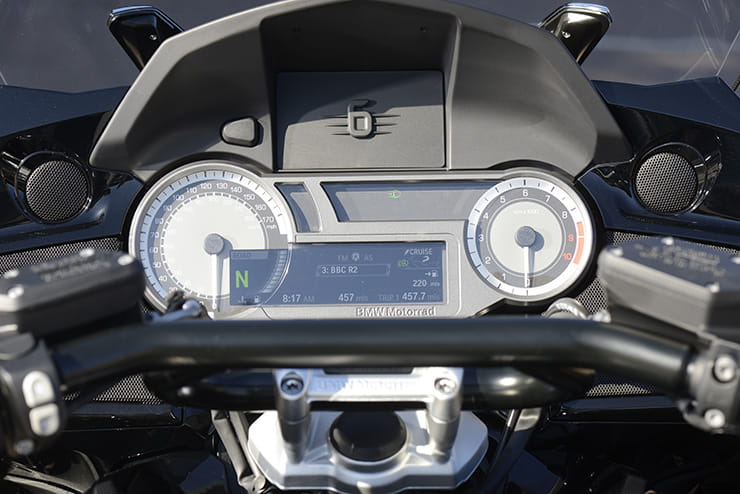 The base K16B costs £16,750 – but the spec of the bike BikeSocial is riding is a K1600B LE, so it comes with, basically, everything – plus optional footboards, crashbars, and keyless, quickershifter and LED fogs. This particular spec of K16 costs a staggering £21,240. Yes, that’s a lot of money. And yes, the K16B is a lot of motorbike.

So what do you get for your wedge? Firstly, you get a riding experience you can’t get anywhere else, mostly because no-one else makes an inline six cylinder bike, let alone one developing 160bhp. And a six cylinder motor is a lot more than just an inline four plus two: primary and secondary balance is perfect, meaning no balance shafts, no high frequency tingling and no blurred mirrors; just a rich, turbine stream of molten go motion spilling out from the long crank like molten butter dripping off a crumpet. 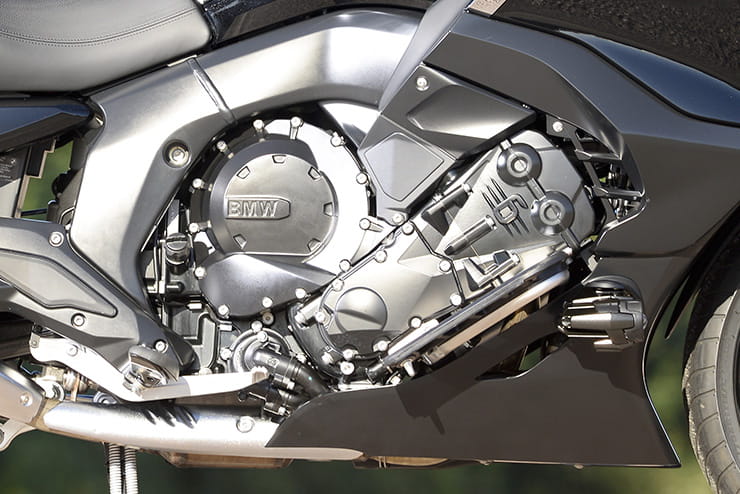 And let’s be quite clear: open the flyweight ride-by-wire throttle on the K16B and it’s like loading yourself into a giant catapult and firing yourself through the air. The way the straight six spins up is truly astonishing; crack the taps and it seems to wind itself up momentarily, drawing sufficient energy from the surrounding space/time continuum before unleashing the kind of warping acceleration that vaporises the distance between here and anywhere you point it. It’s like bareback riding on a force field. There’s no sensation like it on two wheels. Or four, come to that. The bike pummels through a succession of gears – traditionally heavy K1600 transmission smoothed by the quickshifter and autoblipper (right up to the point my leaden left foot wreaks the mechanism and it stops working). In sixth, the speed range in simply vast – it’ll crawl along at 20mph and pull from there to an indicated 130mph and beyond. 80mph in top comes up at 3750rpm – which is barely above tickover.

Like the K1600GT, the Bagger’s chassis is exemplary, managing the bike’s combination of weight and power with expert control and competence. Steering is bafflingly light – the K16B is easier to turn round in the road, on full lock with feet up, than a Honda NC750X. It flicks trough traffic, nips around tight urban turns and sidles up to traffic lights without putting a foot wrong. Or down.

Low speed manoeuvring is the only time the BMW struggles with control – the balance of sharp brakes and quick-action throttle can make it tricky to blend them together seamlessly. But once it’s rolling, it boogies like no other power cruiser (and I include Ducati’s Diavel). The Duolever front end, with its trademark separation of steering from braking and suspension forces, is utterly unaffected by the bike’s mass if you roll it off mid-turn – the steering goes where you want regardless of how much you fanny about with the throttle. 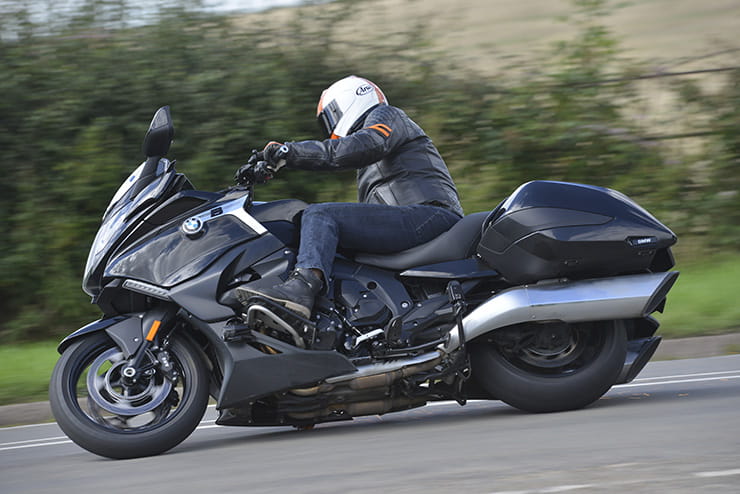 For a crusier, the K16B’s riding position feels fine – on the basis of a couple of hours destroying the back roads around Northampton rather than attacking Sunset Strip or crossing State lines in the US, which might have been a more suitable test (okay, who spent all BMW’s marketing budget?). The seat is very low, but so are the bars and the distance they reach back to sit just above your knees is natural, making the most of the BMW’s low centre of gravity for a steady, tilting feel as the bike turns into corners. Feet are on pegs, usually, but a pair of running boards is an optional extra. While it’s occasionally nice to stretch out, the boards spread legs wide to reach around the inline six motor and at some point you’ll want to move your feet back to the pegs for braking and gear shifting. Plus, the boards are the first things to touch down mid-corner, and you don’t have to be riding too hard to get through the hero blobs and into the metal underside. You’d be better off with the K1600GT’s lowers as an option instead.

Wind protection from the wide upper fairing is excellent; it’s easy to imagine riding the K1600B a long way south in total comfort. Take an ice-pack though – the motor, like all K16s, gets toasty even in the depths of a tepid British summer. Given some proper continental heat, the BMW will properly roast yer tatties in no time. New adjustable side-pods deflect some cool air onto the rider, and there’s more air-flow in general with the low screen and lack of lower fairing.

Because the K16B’s seat height is lower, the Baggerly low screen actually doesn’t feel low at all – in its fully upright position it pushes a decent amount of wind into the rider’s torso; raise it higher and the wind skirts just over a 6ft-er’s helmet. 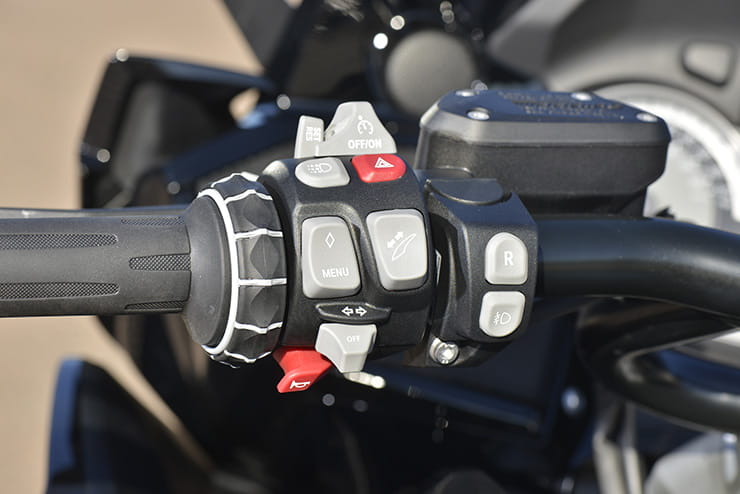 VERDICT: It’s hard to stand back from the K16B and see it as anything than hilariously over the top. It’s an absurdly excessive motorbike in every way – excessive performance, handling, styling and equipment. But, it’s exactly what BMW said they’d do 12 years ago: I remember how, way back in 2005 when BMW announced the new range K-series inline fours with parallelogram front ends, it seemed inconceivable the manufacturer of ploddy flat twins would do anything so radical. But no, said the BMW bosses, we want our bikes to possess the same brand values as BMW cars: performance, technology, luxury, quality and exclusivity. And, over the next 12 years, all their bikes have come to possess at least one or two of those.