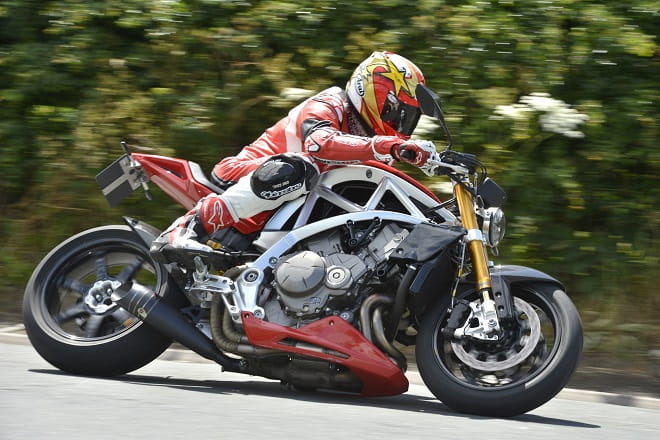 Ariel is back with the second motorcycle to come out of the Somerset factory, the sportier conventional fork version of the V4-powered Ariel Ace. We made the pilgrimage to the land of Cider and Glastonbury to ride it.

From the side of a small factory in the depths of Somerset, something big is happening.

A small manufacturing company with a globally historic name is building bikes again.

They might be making them in small numbers with just 100 expected this year, but the impact the bike and its radical styling has had has put them back on the map as a motorcycle manufacturer, fourty five years after the last Ariel was built. The order books are filling up fast.

In the finest tradition of the bikes that made the name Ariel great, Ariel is back with the latest version of its V4-powered Ace, and we’re here to ride it.

The Ace is like nothing else you’ve ever seen.

Using a Honda VFR1200 engine, electronics and shaft drive system, the Ace is dominated by the aluminium machined frame. Each frame takes 70 hours to build from a block of aluminium. It’s made in two parts and then it’s glued together with a hot gun, in the same style as the Ariel Atom cars (also powered by Honda) you may be more familiar with. 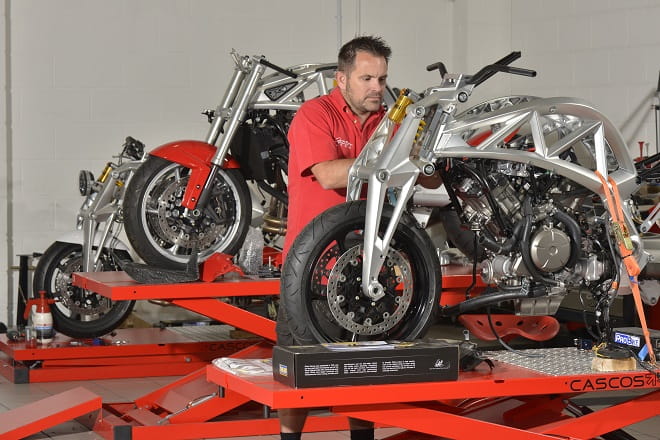 Walk into the factory and there are Ariel Atom cars being made alongside the bikes, and you can see the family resemblance instantly. Like the cars, the bikes are handmade in Somerset and each one is individually specced-up by its owners to their own ideal motorcycle.

It’s the same concept for the bikes. There’s one bike called the Ace which starts at around £20,000, but how you build it is up to you.

The bike we’re testing here has a really different look from the cruiser style Ace we rode last year, the basic elements of chassis and motor are the same. And in this spec it costs £32,000. 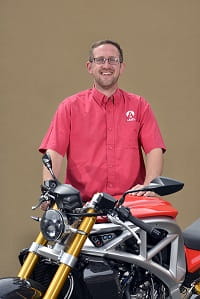 Tom Siebert, Ariel’s General Manager explains: “The bike you rode last time was one end of the scale, and this is the other. We built them to show where you can take the Ace. The cruiser style bike is a very different spec to this one which has higher footrests, conventional forks, a different seat unit, it’s jacked-up at the back, there’s a sportier riding position, different bars. But the same basic elements are the same. And it’s one bike – the Ace. You could build a girder fork bike with the sporty seat unit if you wanted. It’s up to the customer.”

It’s one whole chunk of metal, and the V4 1200cc motor is a big old engine. This is a slightly sportier version of the Ace, using conventional forks rather than the girder front-end of the more cruiser style bike we tested last year.

The eye is in the detail and the Ariel is finished to an incredibly high standard, the fit and finish is factory MotoGP-spec and the quality is incredible.

From the digital race dash to the buttons on the side of the bike which adjust the display and turn off or on the Honda traction control system, down to the stainless steel pipe, the hand the milled aluminium top yoke, every bit of the bike is special. It’s purposeful and mechanical looking.

This bike uses the 15-litre fuel tank sat between the frame spars (the cruiser) uses a 12-litre tank, but you can opt for a 20-litre tank if you want, but it will give the bike more of a hunchback look where the tank cover extrudes from the bike. 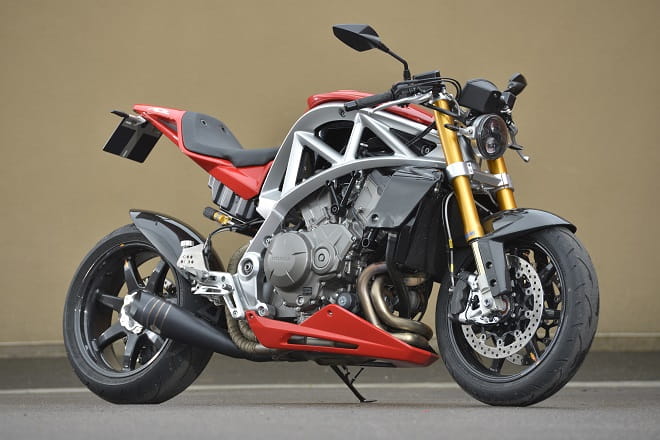 The bike in this form takes on a whole new attitude, it’s sportier, more aggressive and despite the same elements it looks and feels like a very different bike. To most eyes the trademark of this bike may be that milled aluminium front-end, but in this form the Ace is still striking.

It takes on a street fighter style. It’s in the vein of something like the Speed Triple, but classier. The LED headlight wrapping itself between the Ohlins road and track forks. It’s not a sports bike, it’s a fast roadster. And fast it is too. Blindingly so for a bike of this class.

With a claimed 167bhp from the 1200 V4-motor and a purpose built exhaust system the bike makes a nasty rasp.

The key is on the side of the headstock, the switchgear is all Honda. Fire it up and it barks. There’s a nasty V4 growl, the usually docile Honda V4 motor really coming to life in this guise.

You can feel its weight at slow speeds, and the steering lock is fairly limited, but it loses its weight once you’re moving, the weight is carried low, the steering head angle is steep so it turns in quick, and it feels agile.

The eccentric adjuster in the headstock means this bike’s geometry can be adjusted. It has a steeper rake than the cruiser-spec bike, and it turns-in faster, it’s more fluid, more agile and keener to get to an apex than the laid-back cruiser attitude of the other version I previously rode. 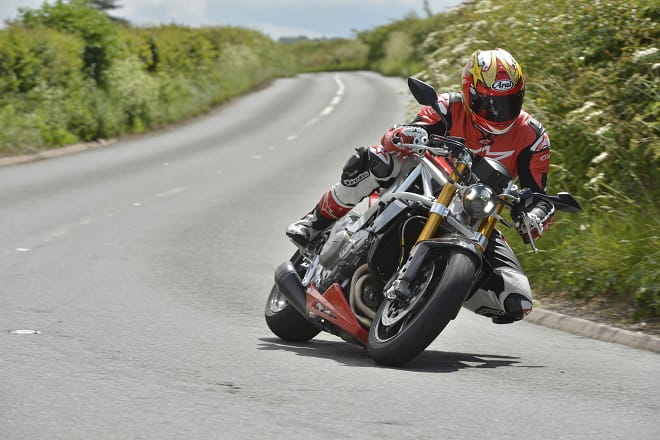 It’s raucous and the motor is torquey. The Honda V4 lump is better suited in this form than in any other Honda that the Japanese giant has made with this engine so far. It may not be offered as a roadster in Honda’s range but based on the Ariel, they should consider it. It works a treat.

There’s tons of low-down grunt, it hits hard in the mid-range and has plenty of top-end too. It never felt this good in anything that Honda has produced so far and just adding a pipe and a slightly sportier character transforms how you use the engine. It pops on the downchange, and growls on the overrun. They'e brought the usually staid motor to life.

The gearbox is a bit lazy when you’re trying to get a move on, but it’s a small blip on an otherwise great platform. The traction control system is first generation for motorcycles and not up to the standard of things like the R1 and BMW S1000RR systems in use in 2015, but just hit the red button on the side of the headstock and turn it off, the bike never really needs it. It always finds traction from the single-sided shaft drive rear-end and the Dunlop Sport Smart tyres.

It was always fast, but in this bike the motor genuinely feels at home, which is probably the biggest compliment you could pay a small manufacturer building its own frame. They’ve done a fantastic job of not only building something which looks fantastic, but more importantly is stiff, easy to handle and works.

It all hangs together so well that you forget you’re riding a hand built motorcycle from a small British manufacturer, such is the attention to detail and the feeling of ‘production’.

But at the same time it feels special. Looks special, sounds, er, special. 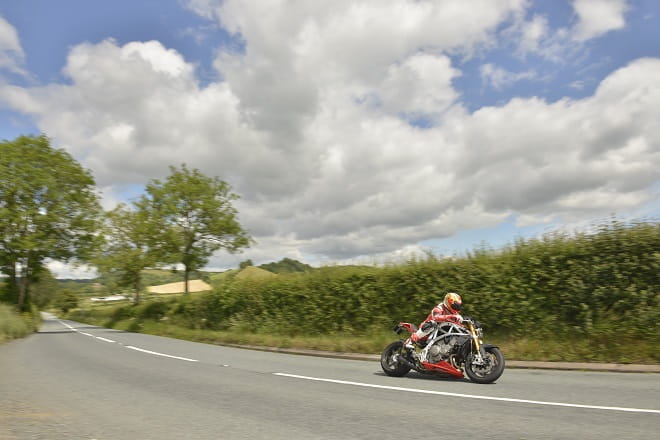 The brakes are Nissin six-pot calipers from the VFR1200 and punish the Ohlins forks into the tarmac when they’re applied, using the ABS to its full effect.

Om the limit the bellypan will touch down but Tom Siebert at Ariel says they’re going to change it so it’s more tucked in, and to give more ground clearance. And that only happened when doing photos where you repeatedly ride around the same corner for photos.

On fast sweeping A-road nothing touches down. It can hustle this bike. A glorious V4 soundtrack, supple Ohlins suspension and a sporty riding position. Get in the groove, work  the engine and feel the suspension doing its thing. A bike with semi-active suspension would be even more rapid cross-country. But the Ace can cover ground on a twisty B-road make no doubt about that.

The Ace is well-built, stunning to look at and classy with it. But more than a piece of eye candy which everyone wants to know about whenever you stop, the Ace works as fast, practical roadster you could ride to work every day if you fancied it.

It’s expensive, of course, but that doesn’t stop people wanting them. And you don’t have to spend £32,000 of course. This bike was built to show what can be done.

Most buyers are opting for the bike with the girder forks, but three Aces were being built when we went down to the factory earlier this week, two with girders and one with conventional forks on the benches with the bike mad Ariel crew excited to be working with two-wheels again.

So what’s next? For now Ariel are keeping their heads down and getting bikes built, but I would expect more motorcycles from Ariel in the next few years, and would bet that at least one of them would have a supercharger on at one point. They have vast experience of building supercharged engines in the Atom cars and although Tom Siebert wouldn’t be pushed on it, there was a glint in his eye when I asked him if that would transfer to bikes.

For now, the guys at Ariel should be more than content that from nowhere they have built a stunningly capable motorcycle at their first (or second in this case) attempt. All credit to them, what a bike. 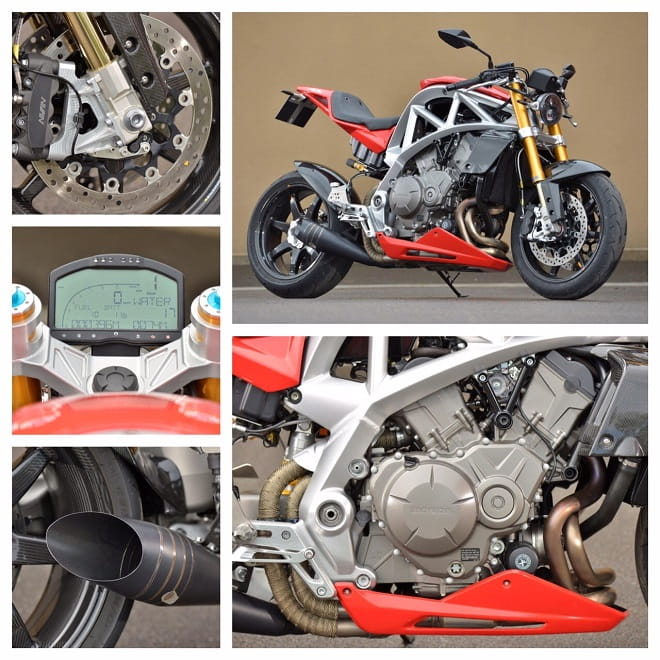 Massive thanks to the boys down at Ariel Motor for entrusting me with their glorious motorcycle again, and apologies for the scraped bellypan and exhaust!