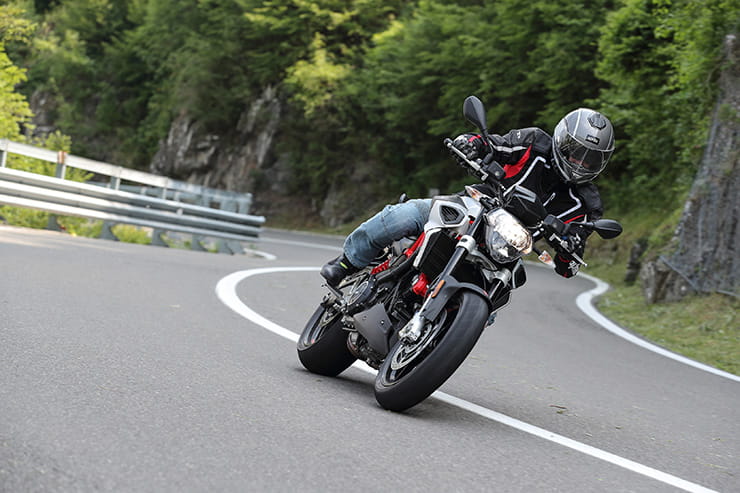 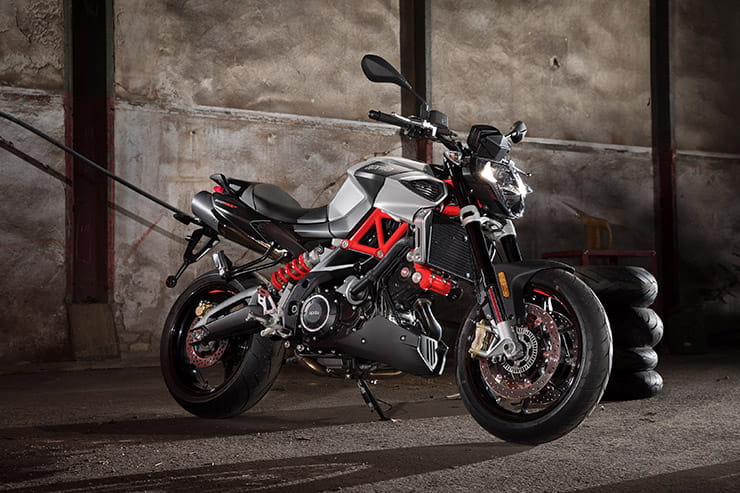 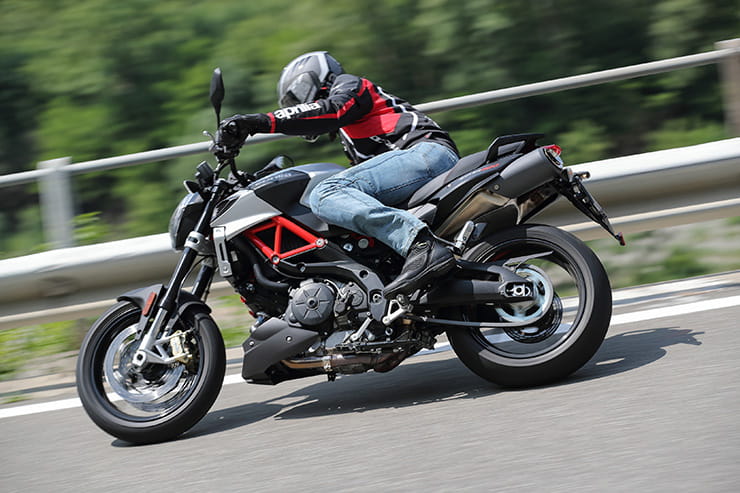 Aprilia often don’t get quite as much credit for their engineering prowess as they possibly deserve. Did you know, for instance, that the Shiver 750 was (Aprilia claim, Yamaha may argue against this fact and point to their YZF-R6) the first production bike to come with a ride-by-wire throttle when it was released in 2007. A technology that their Cube first used in MotoGP, beating the likes of Honda and Yamaha to the punch. Ok that project ended up a flaming disaster (just ask Colin Edwards...) but that’s still an impressive achievement. So what about the Shiver? Well, this naked bike was always intended to sit more at the premium end of the middleweight class and such came with a high level of chassis spec compared to its more budget-conscious rivals. With funky styling (and underseat pipes) and a bit of spunk from its V-twin, the Shiver is one of those bikes that appeals to its fans but to many the Aprilia name on the tank is a turn-off, which is a shame. Updated in 2017 to become the Shiver 900, the latest model is not only more reliable than the early one, it also ups the tech game and delivers enhanced performance. With prices fairly sensible in the used market, it is a tempting alternative to the more run-of-the-mill rivals that certainly stands out in a crowded car park.

You may assume the V-twin motor will be lumpy and aggressive but in reality noting could be further from the truth and the Shiver’s engine is remarkably smooth. Feeling a lot like an SV650 on steroids (which is no bad thing) it revs cleanly and has lots of lovely mid-range drive. It really is a very pleasant engine to use and with 93bhp and 66.4ft.lb of torque on offer (it can be restricted to A2-legal if required) is peppy enough to thrill while not being over-the-top or too aggressive. That said, its smooth nature does make it a touch forgettable and when you see the spec of its chassis and the Aprilia name on the tank you kind of expect it to have a bit more fire in its belly. If you want to add a touch of spice, altering the gearing is thoroughly recommended.

As the name suggests, the Shiver 750’s engine was treated to a capacity hike to 896cc through a longer stroke within the 90-degree V-twin’s barrels when it became the Shiver 900 and to go with this a few internal mods were also applied. Nothing that drastic, just sensible changes that also saw the clutch’s lever effort reduced by 15%, the fuelling improved and the motor’s midrange and peak torque boosted by 7ft.lb. The peak power remains the same, mainly to allow it to still be made A2-legal via an ECU re-map, which is easily reversed once you gain a full A-licence. In terms of reliability there have been a few factory upgrades, so ideally go for one with a service history from an Aprilia dealer, and listen out for any rattles from the cam chain tensioner. It’s not a common issue or one that is hard to fix so isn’t too concerning. The service intervals on the Shiver are every 6000 miles with the valve-clearances at 12,000 mile intervals. It’s not a particularly expensive job but you do need to keep on top of them as the exhaust valve gaps can close up, which has the potential to damage the valves if left unchecked. The gearbox is robust on the Shiver and so is the exhaust system, although quite a few owners upgrade it for aftermarket cans. If you choose to do this be aware that the odd slotted ends on the OE cans are there for a reason. Owners complained that the Shiver 750 made their clothing smell of fumes as the vacuum created behind the bike causes exhaust gasses to be sucked backwards, hence the reason the 900’s pipes have side exits. To be fair this is more a fashion-conscious Italian rider issue than a British rider one... 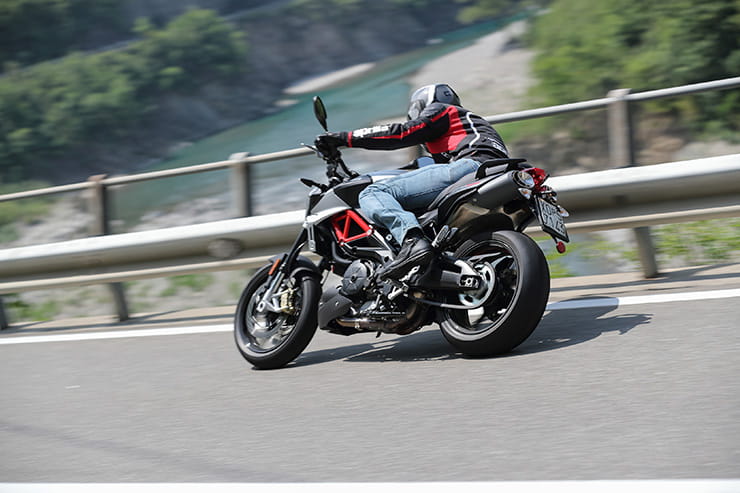 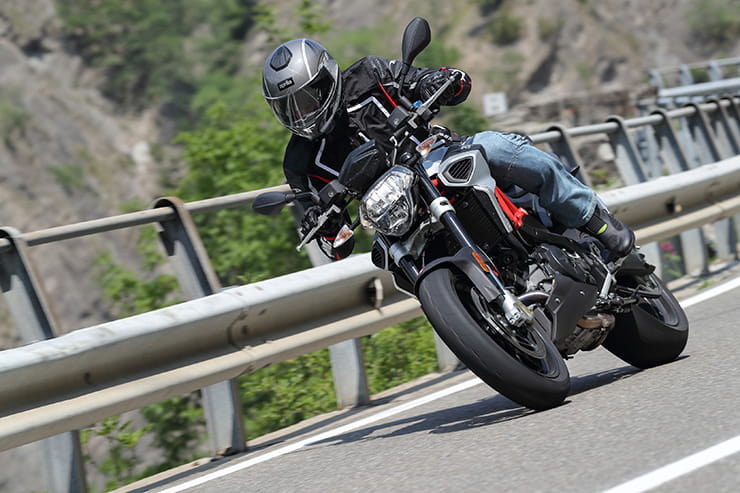 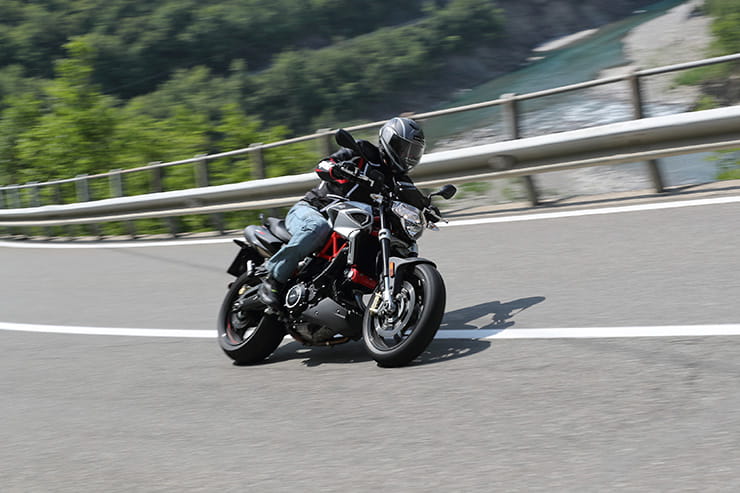 Aprilia claimed the Shiver would deliver 53mpg but in reality you can expect to average a slightly less economical 46mpg, which equates to a tank range of approximately 151 miles. On a naked bike, that’s more than enough.

On its standard settings the Shiver 900 is a bit too steady to be enjoyable and as it sits a touch flat it is not as agile as you would hope. Happily, this sensation only requires the shock’s preload wound up a bit to throw some weight forwards and you are away. The chassis is pleasingly taut and the suspension also swaying more towards sporty riding than cruising, which is good – unless you hit a pothole! Quite often Aprilias leave the factory set way too firmly but the Shiver just about gets away with its setting, although anyone who likes to ride on bumpy roads may disagree. In town the clutch action is a touch firm but the fairly low 810mm seat height reassuring for those shorter in the leg.

The Shiver has ABS as standard as well as braided lines and four-piston radial brake calipers, so it is hard to complain too much aside from a bit of a lack of feel. Unlike some modern system the ABS can be deactivated should you wish but there isn’t much point. It is unlikely that a used bike will have any worries from the brakes so as long as there are no signs of the calipers’ pads dragging (lift the front and give the wheel a spin) or a pulsing feeling that hints at warped discs (or more likely the rotors being clogged up and not allowing the disc to float, just squirt on some brake cleaner to flush the grime out) all should be well. 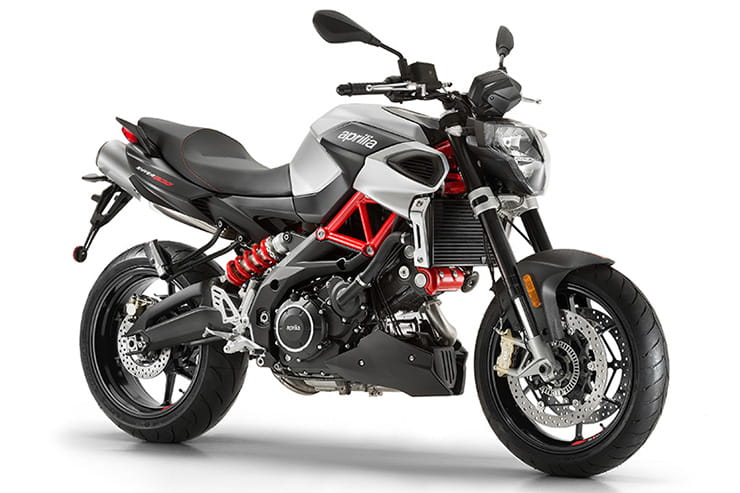 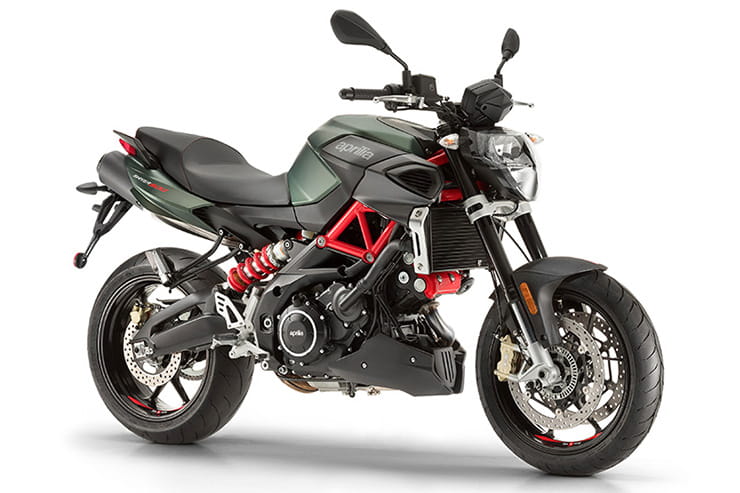 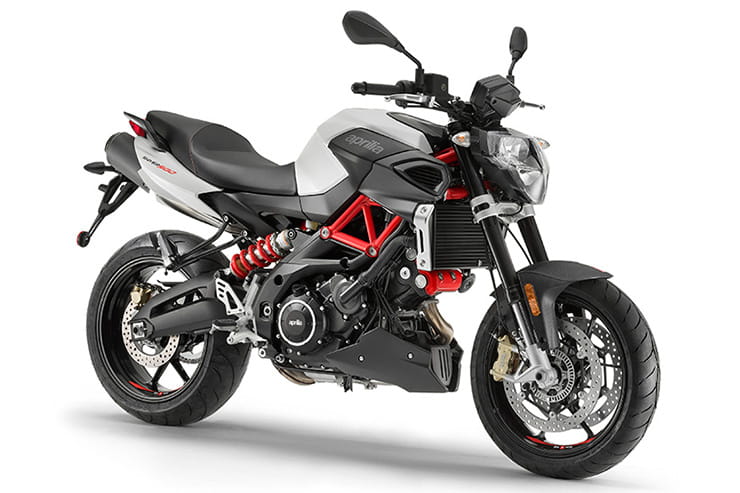 The Shiver is a naked bike and a sporty one at that so you can’t expect too much in terms of comfort. The seat is ok, a touch firm but not horrific, and the dash does deflect a bit of wind blast but really this is a bike designed for having fun on, not smashing out the miles. Also, the underseat pipes make using soft luggage a bit tricky as it can start to get overheated if you aren’t careful. Aprilia did release a few touring accessories including panniers and a comfort seat, but very few used examples have them fitted, it’s just not that kind of bike.

Alongside ABS the Shiver gets three power modes – Rain, Road and Sport. As the engine is so smooth they are a bit pointless (Rain drops the power to 70bhp) and most owners simply leave it in Road as Sport is a touch aggressive. Making a Shiver A2-legal is a simple ECU re-flash so it is very easy to reverse, which is good, and there are three levels of traction control and it can also be deactivated. Although a touch basic, the TC and ABS both work well enough for road riding. The Shiver 900 added a new TFT dash to the party (as used on the Tuono V4 and RSV4) and its 4.3-inch screen is nice and clear and has the option of adding Aprilia’s AMP kit for connectivity. Considering the bike was launched in 2017, that’s quite impressive as some modern bikes (the Yamaha Tracer 9) haven’t achieved this yet!

When it comes to accessories, a great mod is to drop the gearing. The Dorsoduro 900, which is effectively a Shiver 900 in supermoto guise, has a 15-tooth front sprocket to give it a bit more spirit where the Shiver has a 16-tooth one for cruising. It is well worth fitting a 15-tooth one on the Shiver as it makes the bike feel more eager to respond. A lot of owners fit loud pipes (and have smelly jackets...), small screens are common, bar-end or smaller mirrors prevalent and you get the occasional bike with a tank bag and heated grips. Generally, however, the Shiver is left pretty much stock.

The Shiver 900 is a good step up from something like an SV650 as it has the same user-friendly feel but a welcome extra bit of power and tech. It’s not as engaging as the naked triples (MT-09 or Street Triple) but it is a solid bike that has a refreshingly different look without being too wild. Not every rider wants to risk stepping away from the Japanese brands and chancing an Aprilia, which is understandable, but if you are willing to take a bit of a risk the Shiver 900 is a decent bike. It’s no mini-Tuono but it is a good-looking, fun and easy-going naked.

Three things we love about the Shiver 900… 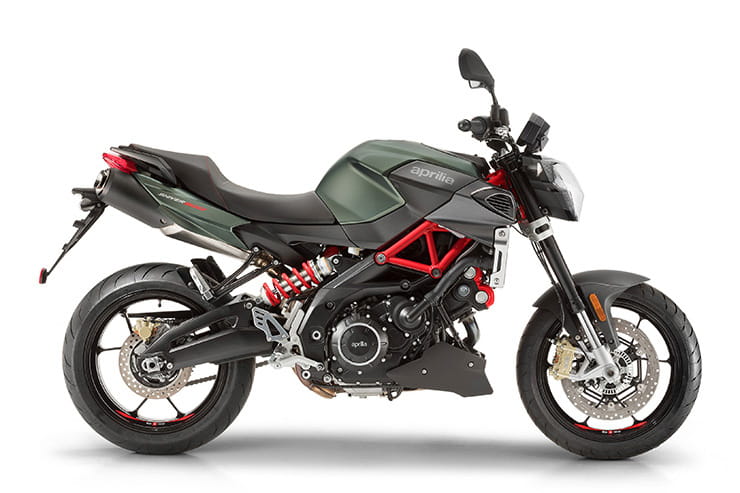 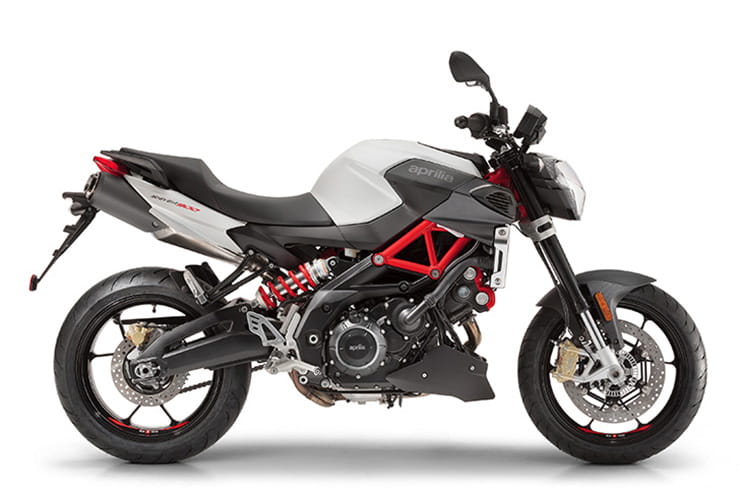 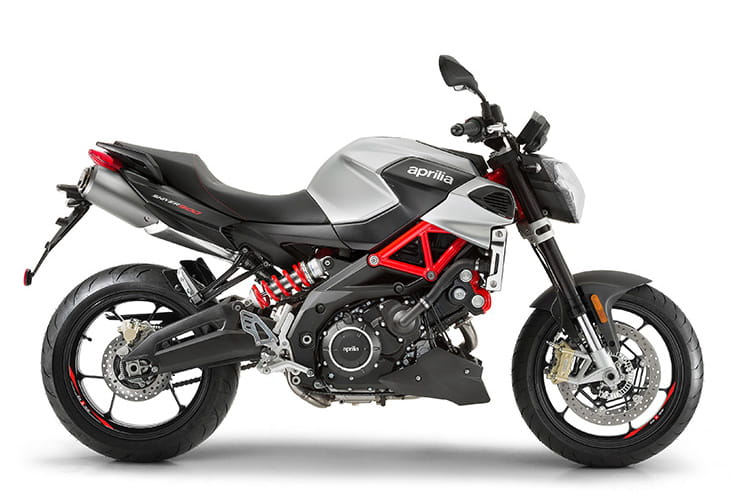