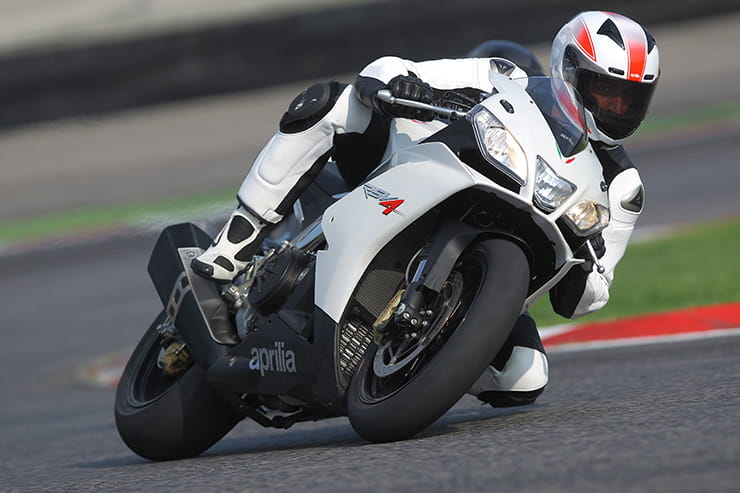 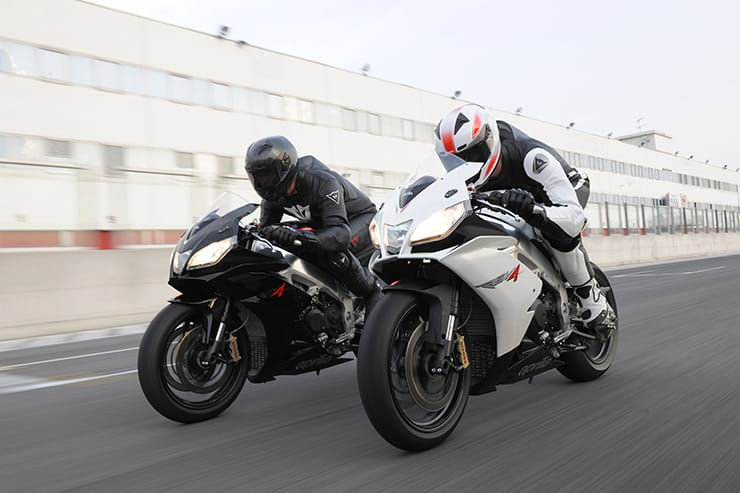 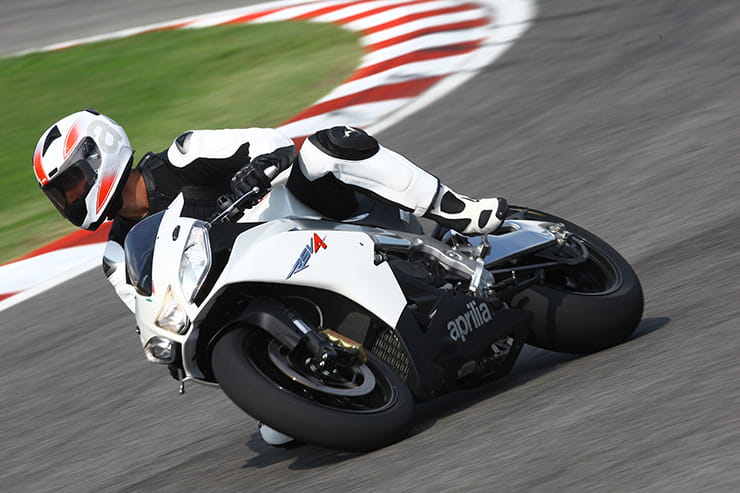 In 2009 Aprilia were showing all the other manufacturers the way in the sportsbike market. Possibly not in terms of sales, but certainly when it came to technology. How? By dumping their traditional V-twin motor and turning to a V4 instead, something that took Ducati (we won’t mention Norton...) another 9 years to replicate...

Having released the RSV4 Factory, which was the top-spec version of their all-new superbike, earlier in the year, Aprilia then followed it up with a lower-spec model – the R. Ok, things didn’t go too well to start with (more on this later...) but boasting the same chassis, V4 engine (near enough) and electronics as the Factory, yet with a £2k price saving, the R model certainly hit the right note and drew a lot of attention – if not sales.

Far from a ‘budget’ alternative, the R’s suspension may lack the Öhlins gold boasted by the Factory but aside from lighter wheels that is the only real compromise you make opting for it instead of the top-spec model in the RSV4’s early years. Built for two years before being fairly substantially updated (in terms of its electronics at least) the original RSV4 R is an interesting, but it has to be said a touch risky, used sportsbike purchase. If value for money is your thing, look no further. If reliability and comfort is more paramount, well, these could be slight dissuaders to ownership...

In 2009, picking the R model over the all-singing Factory saved you £2000 at £12,999 compared to £14,999, which was pretty tempting when you consider the spec of bike you are still receiving. That said, most owners still opted for the Factory as if you are going to throw down £13k on a bike, you may as well swallow an extra £2k and go for the Full Monty. Nowadays the original RSV4 R isn’t a hugely popular used bike as not only does it have a tarnished reputation, it is also low-spec compared to the Factory, which can be had for not a lot more money. An early RSV4 R can be found for in the region of £5500 but this will be a high-milage example (there are a few out there) and instead you need to assume a budget of between £6000 and £7000 in a dealership, which is about £1000 more than a Factory goes for. You can pick them up in a private sale for closer to £6000 but obviously there is no warranty offered... Prices for the more tech-heavy 2012 version start at £7500-£8000.

The V4 motor really is a beautiful thing to ride and as well as being horrifically fast is also fairly useable with a good spread of torque. The ride-by-wire throttle isn’t bad at all and the power modes do prove useful when you want to knock a bit of the edge off its ferocity, which you may well want to do as huge great lumps of torque and a very sharp sportsbike chassis do often see the RSV4 getting a bit flighty under hard acceleration on the road...

Oh dear me, where do we start here... Well, kicking off with what most people remember, the RSV4 R suffered a very embarrassing debut when mid press unveiling it started to snap conrods... The resulting investigation saw early bikes recalled and the faulty items replaced, a move that saved any more engines from going pop but tarnished the bike’s sales for many years to come. You won’t find one with a dodgy rod in the UK, all 60 sold were sorted out. Next up is the cam chain tensioner, which is a fairly terrible bit of design and Aprilia have been updating it pretty much since the bike was launched. The RSV4 is a rattly engine from cold as standard but if it is excessively rattly, see which version of cam chain tensioner is fitted and update it to the latest spec. Now the gearbox, which is on the point of being viewed as a consumable item on the RSV4 and if you fit a quickshifter (the original model didn’t have one as standard, the updated MY13 does) you run the very real risk of creating major gearbox issues. Happily, its cassette design means it is quite quick and easy to remove – sadly new gears are pricey! Finally, there is the exhaust valve, which can seize but also throw up a fault code on the dash if the can is changed and the valve disconnected. You can either remap the ECU to lose the fault code or buy a plug-in module to pacify the ECU and lose the warning. So, with all these concerns out in the open, what else do you need to know?

The only real difference in terms of the V4 motor between the Factory and R is the fact the Factory gets movable intake trumpets where they are fixed on the R. Creating a very small dip in peak power (5bhp) you won’t notice any difference on the road as you still have a very healthy claimed 180bhp at your disposal! Watch out for any bikes approaching the 12,000-mile mark as that is the valve clearance check (service intervals are every 6000-miles) and due to the compact nature of the R, this is pricey as it is a hard bike to gain access to the motor on. Owners report that the clearances often require altering, so don’t skip this service! Weirdly, 2009/2010 RSV4’s run a different spec of oil to the later bikes, so always check your owner’s manual to see what should be in there.... 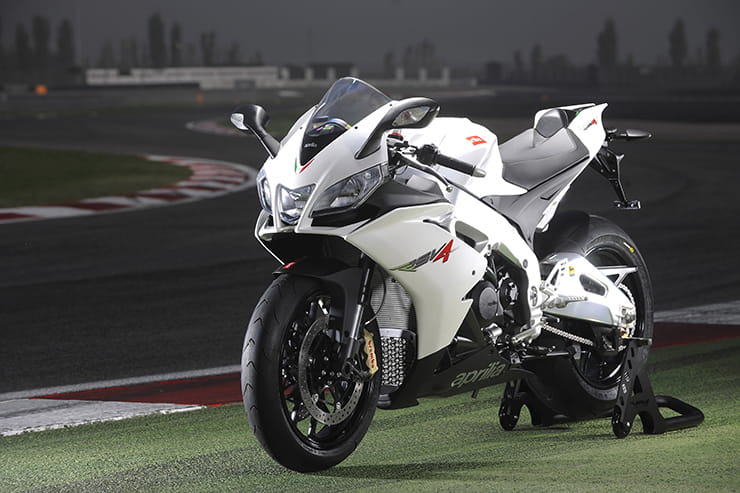 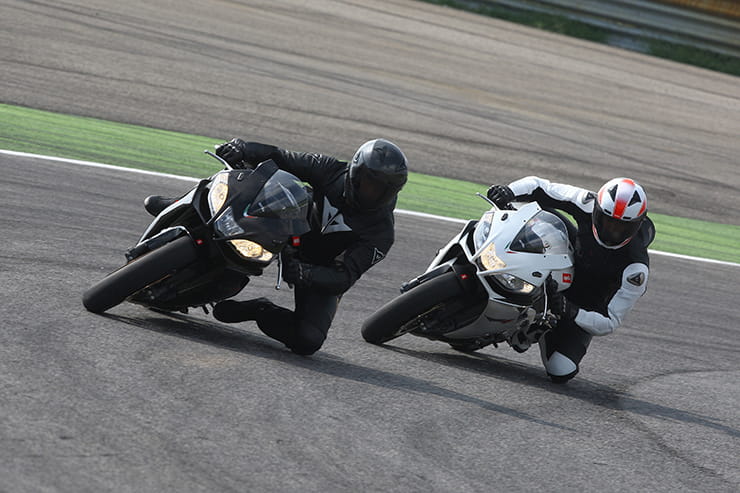 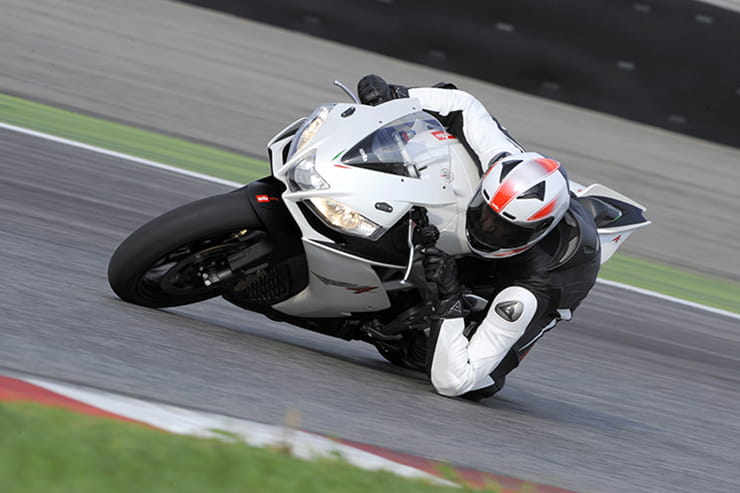 Economy? On an Aprilia sportsbike? Nope... If you are lucky you will see about 32mpg on the R with track riding reducing this even further. Annoyingly, that gives it a pretty limited tank range and you will get about 110 miles before the warning light comes on. In the MY13 update the RSV4 gained a bigger tank, but only by 0.5-litres so it isn’t much to shout about...

What do you miss out on by opting for the R over the Factory? Aside from Öhlins suspension, lightweight wheels and an adjustable swingarm pivot point, nothing when it comes to the chassis and that’s great news. The R may feature Showa forks and a Sachs shock but they are perfectly acceptable for road use – however there is an issue with the Sachs shock on a used bike. Öhlins units are fully-rebuildable and while you can service Showa forks, you can’t (well, some companies can but they aren’t designed to be disassembled) strip and rebuild a Sachs shock and that means if its damping goes, you are looking at a bill of about £500-£1000 for a replacement unit, depending on the quality. In the used market, that’s a hefty chunk of the price difference as buying a Factory over an R model and so negates the point of going for the lower-spec bike. It’s a thought worth considering.

Onto the ride and given an open road (or track) the R is just as impressive as the Factory. A stunning bit of engineering, although incredibly compact and small in size, the RSV4 is a full-on WSB bike with lights and is amazing to ride. It is hard to believe it is nearly 13 years old now and it is worth nothing that Aprilia haven’t really altered the RSV4’s frame since it was launched, so they certainly nailed it from the onset (and won three WSB titles). Feeling like a turbo-charged 600 when you attack a set of bends, it is quite simply staggering.

This generation of RSV4 has no option of ABS, that arrived in the MY13 update, which is a strange thing to note on a sportsbike nowadays. The Brembo monoblock calipers are, as you would image, absolutely top-draw in terms of their power and feel and you get braided lines as standard, which is good. Aprilia, like all manufacturers, recommend the fluid is changed every two years so check it is nice and clean however with no ABS pump to get contaminated, it’s no drama and is a simple swap and refresh for any home-DIYer. It is worth just casting an eye at the discs to see how badly they are worn or if they are blued as this could hint at track use. 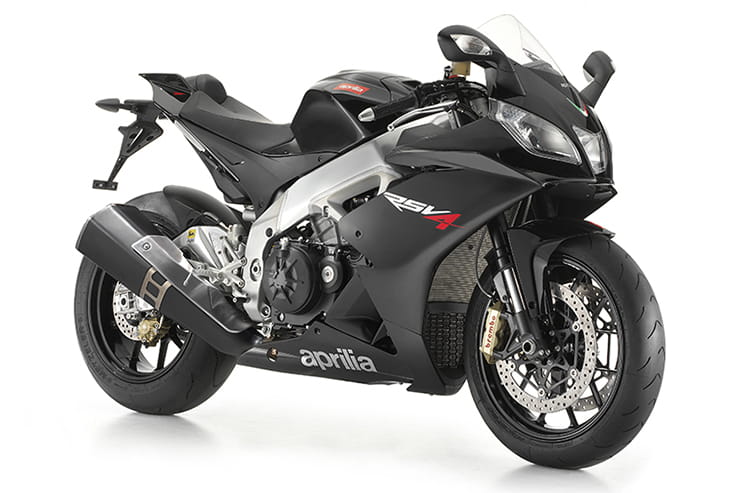 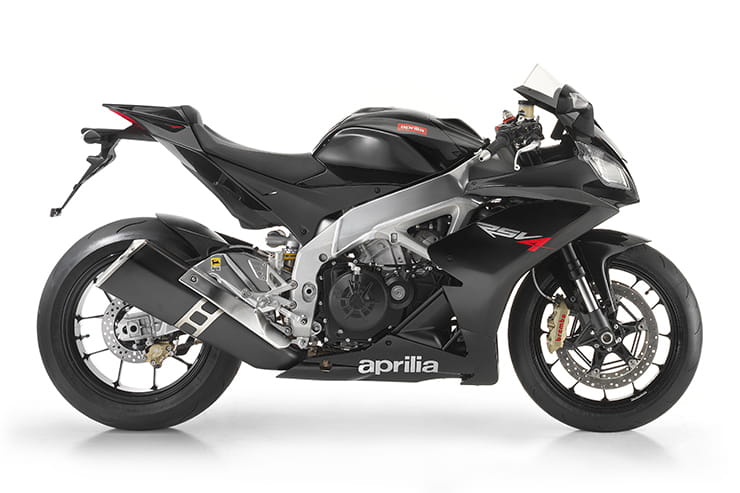 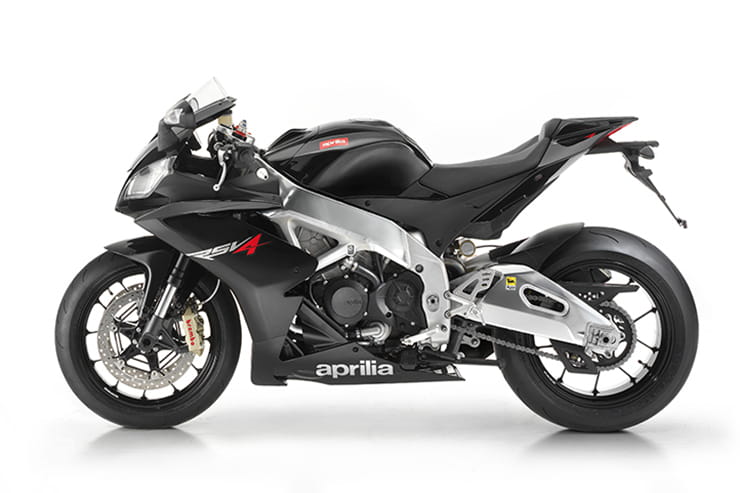 Oh God no, you really don’t want to spend a long time in the saddle of an RSV4 R. With a full-on racing crouch featuring low bars and tall pegs, the RSV4 is a very uncomfortable bike to ride gently. The firm suspension will batter your already aching wrists and while you can fit a taller screen to deflect a bit of wind, in terms of comfort turbulence is the least of your worries!

It seems crazy to say this on a 180bhp V4 but the RSV4 R came with very little electronic assists and you only get three power modes (Track, Sport and Road) to play with. Aprilia introduced their APRC full electronics package on the RSV4 R Factory Special Edition ‘Biaggi rep’ in 2011 and in late 2012 (MY13) it made it onto the R and Factory models. If you want electronics, you need to pay more and buy one with this fitted.

In terms of accessories, RSV4 Rs often have loud pipes fitted and a few owners fit the Öhlins shock from the Factory to R, which is a straight swap. Tail tidies are common, as are taller screens, and a few get replacement levers etc bolted on. In general, go for a standard bike and if it has a can, see if it has been re-mapped to suit. Avoid any with aftermarket quickshifters fitted as these can ruin the slightly weak gearbox.

The RSV4 R is a tricky bike when to comes to buying used as its lack of electronics and also the fact it is the lower-spec bike can make it seem quite sub-standard. And that’s before you consider the reliability side of things. However, if you get a good one (they are out there) you are picking up one hell of a sportsbike for a very reasonable amount of money. It is worth going for the early one without APRC over the later upgraded model? That depends on the size of your budget and how confident you are controlling 180bhp with your right wrist alone...

Three things we love about the RSV4 R… 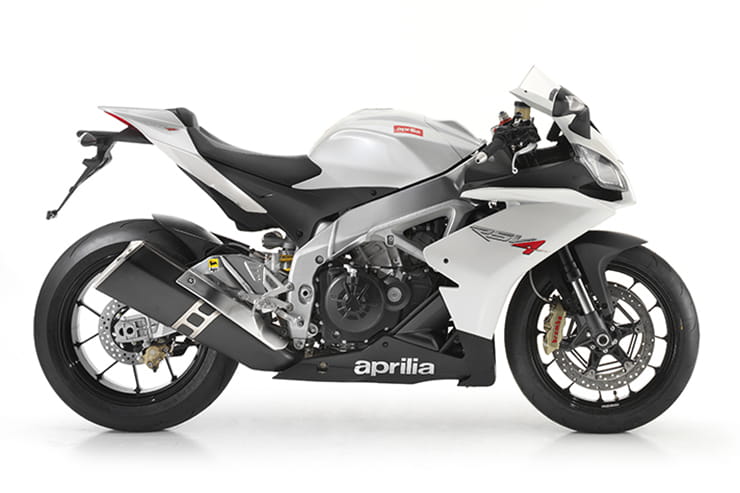 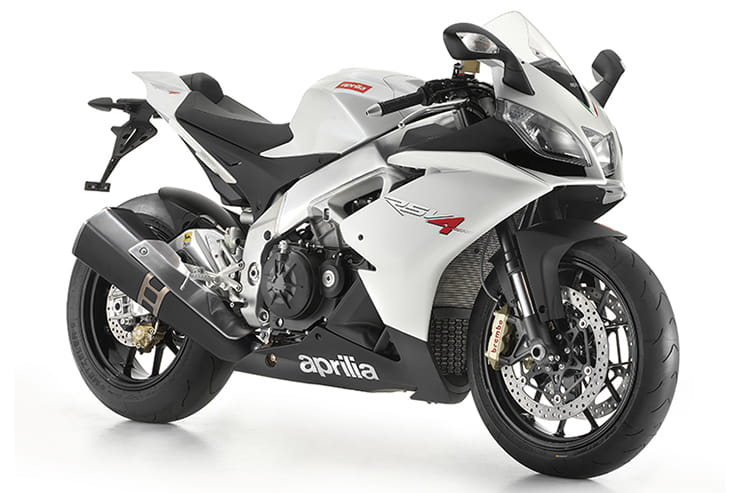 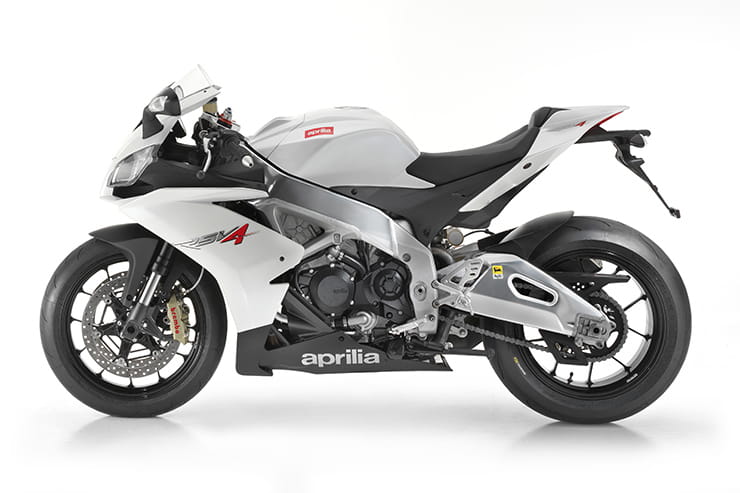