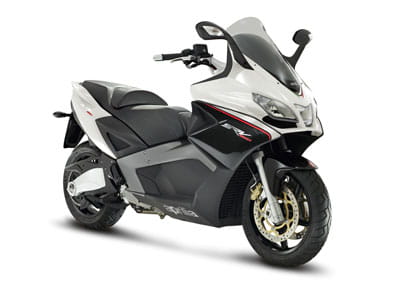 You might think Aprilia’s SRV850 is the maxi-scooter, but it is a simple twist on the Piaggio GP 800 from six years ago, a bike that sales-wise failed. Massively. Here’s hoping the SRV850 fares better than the Piaggio. It should if only because it’s big, convenient and easy to ride given that it is powered by an 839.3cc, 90° water-cooled V-twin based on the semi-auto Mana 850 GT motorcycle.

It’s potent for a scooter, too. A claimed 76bhp is not to be sniffed at, especially if owning a middleweight sports commuter because you will easily be out-dragged from a standstill. And while you’re slotting home the gears, the automatic transmission of the SRV 850 will see it pulling away even further.

Let’s be honest about this, a scooter is foolproof to ride. Open the throttle and ride away without a care. But the SRV 850 isn’t idiot-proof. An idiot will almost definitely push past the legal limit and keep going. Getting out of shape is also very possible on fast bends with a couple of good bumps to catch you out.

At legal speeds, the suspension is more than capable. Go faster and its straight-line stability is still ok. But load-up the SRV’s long length and 255kg-plus weight with cornering forces and hard hit suspension and the plot starts to unravel in a wibbly wobbly weaving session. You’ve been warned. Thankfully braking is strong enough to slow speed well in advance.

Dressed in corporate Aprilia colours with RSV styling cues, the SRV looks fantastic despite Trojan Horse dimensions. Yes, the SRV stretches the definition of maxi-scooter one step further. Maybe two. At least the seat is comfy and topped with a grippy covering material. However, the stretch to the bars puts bums right at the front of the seat and it isn’t comfy for a bloke after a while.

The idea of a powerful large scooter isn’t as daft as most motorcyclists would think. To be able to carry loads for convenience and in comfort without the hassle of clutch and gearbox use hits our tickly spot bang on.