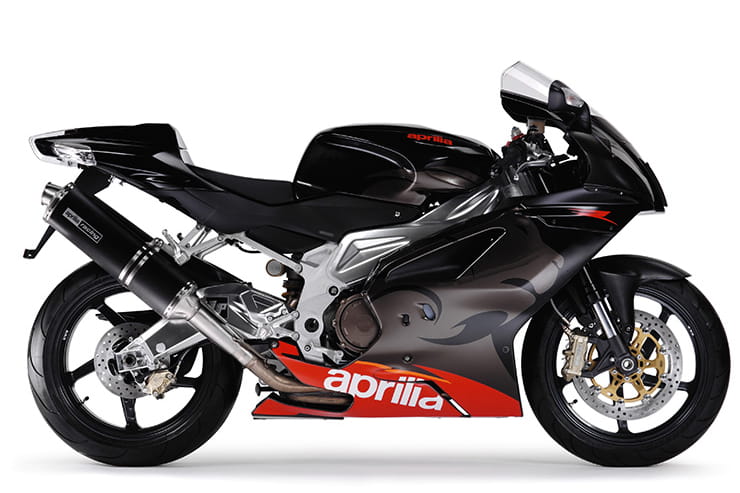 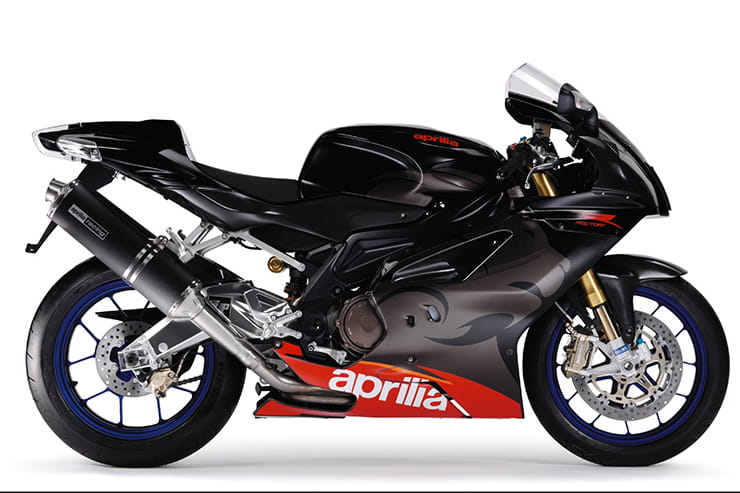 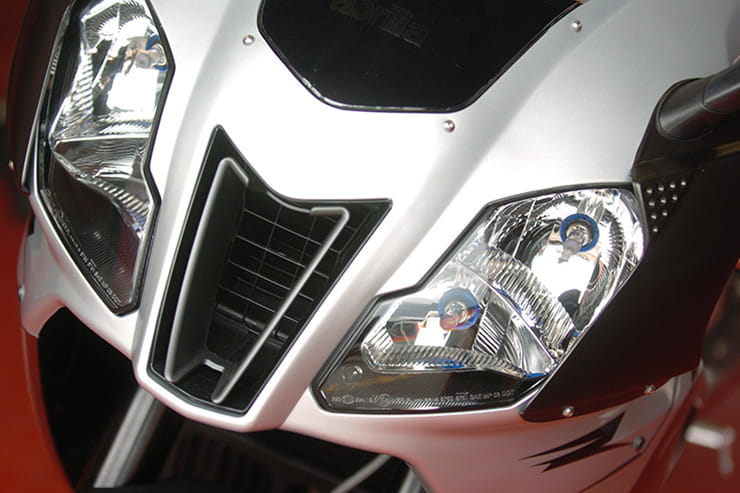 Somewhat unfairly referred to as ‘the other Italian V-twin’ the Aprilia RSV range deserve an awful lot of credit and if you are after a bargain bit of exotica, they represent tremendous value for money. Built at a time when Ducati dominated the headlines, the RSV not only raced with reasonable success in the World Superbike Championship, it introduced the masses to the likes of Öhlins suspension, Brembo brakes and lightweight OZ Racing wheels through an affordable high-spec model which sold in big numbers compared to Ducati’s small volume S and R models. If you after a genuine day-to-day V-twin sportsbike that won’t break the bank but comes with all the bling, check out one of Aprilia’s fantastic RSV models.

Aprilias tend to sell on price and they are cheap to both buy and run, well in comparison to a Ducati anyway! You can get an early stock RSV for £2500 in good condition with the higher-spec R version setting you back only slightly more at £3000-£3500. If you want the second ‘twin-pipe’ generation (where the base model is now called the R and the high spec the Factory) you need to look at paying roughly £3500 for an R and £4000 for a Factory with this rising to a maximum of £6000 for a late model. There are a few ‘special edition’ models but the Edwards and Haga don’t command much of a premium where the Nera is catastrophically expensive and very rare. The SP, which is the WSB homologation special, was made in very limited numbers (150), bears very little relation to the road bike (it has a totally different motor) and will cost you roughly £15,000. It is probably worth it…

As Aprilia use a smaller V-angle on their engine compared to Ducati it gives the motor a totally different feel. Faster to rev and considerably less lazy, the RSV’s engine makes a very impressive 128bhp (or 143bhp on the second generation) with a stomping 76lb-ft of torque. To ride it is fun motor that has a more aggressive feel about it than the Ducati engine thanks to its quick-revving nature. It’s not a classy Italian gent like the Ducati testastretta, it’s more a young bad boy whipper-snapper and that’s certainly a major part of its charm. If you want to make it even more thrilling, lowering the gearing on any RSV V-twin model (or Tuono) delivers a hysterical acceleration boost and lots of wheelies!

As we are talking about two generations of RSV you need to know what you are buying motor-wise. The original generation (single exhaust pipe) uses the V990 engine and was updated in 2001 where it gained bigger valves and a small boost in power. The whole engine was changed in the second generation of RSV (twin-pipe models) and this V90RR (or magnesium) engine was also given bigger valves in a 2007 update. Obviously, the bigger the valves the more power so later models gain a few bhp on earlier ones and the V90RR is more powerful than the earlier V990. Ok, with that sorted you need to know a few things about the engine on all RSV models. For starters they hate unbalanced throttle bodies and if they aren’t properly set up by someone who knows their stuff  you get a terribly snatchy throttle response, especially at low revs. Big V-twins can damage their sprag clutch if the bike is started with a battery that doesn’t have enough juice in it, so upgrading to a more powerful battery (a higher CCA) is always recommended and when buying used listen out for a squeaking sound when the starter is hit that indicates the sprag clutch is duff. The RSV’s gearbox is fairly strong, so no issues here, but the clutch system is a pain as it allows air into the fluid, making the bike tricky to get into neutral. You can either bleed it regularly or fit an aftermarket slave cylinder to get over this. In terms of the exhaust, if you have a first generation bike, fitting a ‘scavenger’ exhaust system that fools the motor into thinking it is a twin pipe gives a lovely boost in power (especially with an airbox conversion). It is worth bearing in mind that aftermarket race exhaust end cans are generally catastrophically loud on the RSV, so if you like your neighbours, keep it stock! 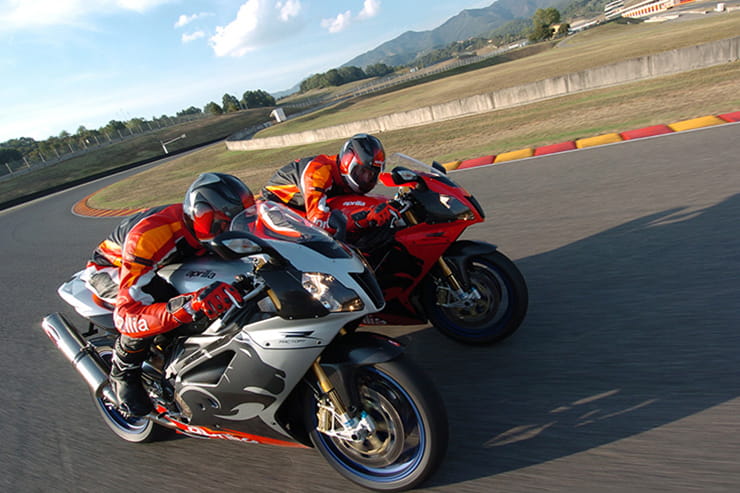 The RSV isn’t a very thirsty motor and you should be able to average in the high 30s in terms of mpg. Servicing is also fairly reasonable with the motor requiring a minor service every 6000 miles and a major at 12,000 miles (no cam belts to change, it has cam chains!), which includes valve clearances. Expect to pay about £400 for a major, which isn’t too bad at all. Happily, the RSV is also generally quite cheap to insure when compared to a Ducati although always perform an HPI check when buying a used one as quite a few are written off by insurance companies…

If an RSV is dropped, even at low speed, the pegs and exhaust system has an annoying habit of pushing into the frame/swingarm, denting them and in the eyes of many insurers writing the bike off as non-economical to repair. These bikes often find their way back into the used market (hence the need to perform an HPI check) so always check this area well for signs of damage. Despite feeling a little top heavy due to the tall nature of Aprilia’s V-twin engine, get an RSV set-up nicely and they are beautiful bikes to ride, especially the higher spec models. If you go for an R or Factory with their Öhlins suspension and OZ Racing lightweight wheels you will certainly spot the improved turn-in speed and when compared to a Ducati as they respond far more like a Japanese inline four in terms of speed of turn. There is a slight trade off, the Öhlins kit tends to pop fork seals if left standing for long periods and the fork legs can crack if the pinch bolts are over-tightened, but unlike the stock bike’s suspension, all of the Öhlins kit is fully-rebuildable. Pleasingly, you can mix and match between RSV models, so upgrading a stocker to R or Factory spec through second hand parts is fairly simple (always check fitment before and inform your insurance company of the upgrade).

There is no option of ABS on any RSV model but you do get braided lines and Brembo brakes as standard, which is good. The first generation carry ‘conventional’ calipers while the second generation models both have radial brakes. If you want more bite, update the pads to high friction alternatives. With all RSV models your main braking issue comes from the rear caliper, whose master cylinder is mounted horizontally right next to the hot engine not vertically and that means is very susceptible to air ingress, making the rear brake (which is annoyingly hard to bleed) useless. Some rearsets relocate the master cylinder vertically, curing this irritation. 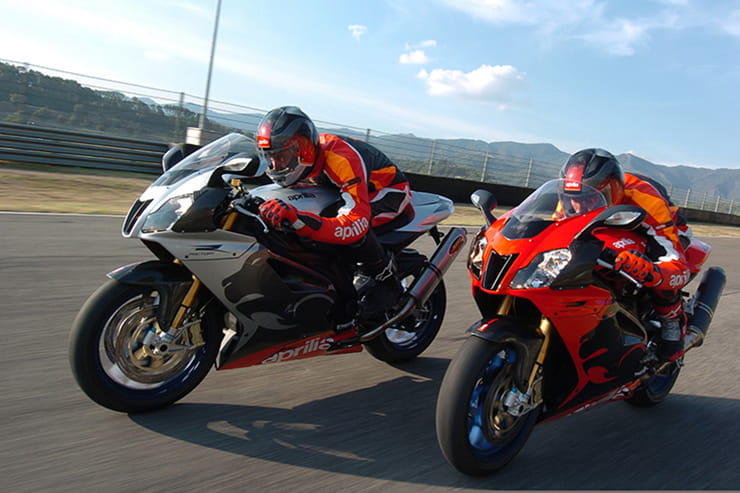 The RSV is pleasingly big and roomy to ride and has a substantial fairing, so it is a comfortable sportsbike for distance work. It’s not really a tourer, but it is ok for more than just short hops. The second generation have a slightly smaller 18 litre tank, down 2 litres on the first gen.

Aside from a built-in lap timer, the RSV has no rider aids. In terms of extras the best thing to fit to any RSV is the ‘airbox mod’ which removes the top of the OE airbox and instead seals the airbox to the lower half of the petrol tank, increasing its volume and allowing the motor to get more air in and power out. There are lots of versions available and they cost less than £150. A scavenger exhaust is a great mod for a first generation bike, junking the heavy OE pipe (or pipes) also helps shed excess weight, dropping the gearing is recommended and if you do a lot of track work, don’t rely on the OE slipper clutch as it is pretty poor, buy a quality aftermarket unit instead.

The RSV has a huge fanbase all over the world and they make for excellent day-to-day high-spec V-twin sportsbikes that have a good array of bolt-on extras available to make them even better. Far from ‘the other Italian V-twin’ the RSV is a fun-filled Italian thoroughbred in its own right and very good value for money with a strong reliability record.

Three things we love about the RSV… 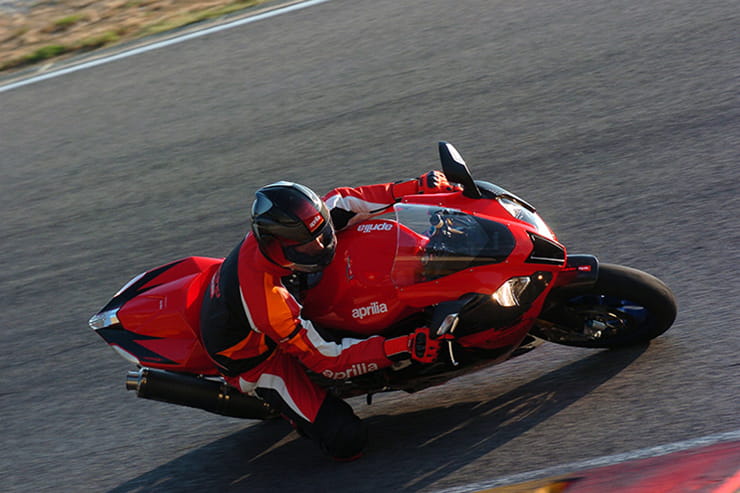