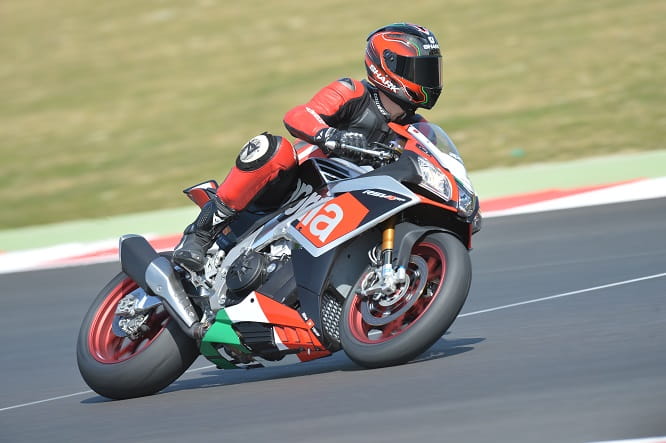 The RSV4 has been arguably the fastest and best super-sports bike of recent years, winning countless comparison tests (not to mention three of the last five World Superbike titles) even if its sales haven’t come close to matching that level of success. This year the super-sports class is more competitive than ever, so Aprilia have done what they do best: tuned and tweaked the compact V4 to make it faster and better than ever.

Better only for the racetrack, mind you. The RSV4 has been a fiercely track-focused weapon ever since the original model was launched in 2009. That attitude very much remains, even in the new, top spec RSV4 RF version that is the only one being imported to the UK. This adds Ohlins suspension and forged wheels to the format, but you won’t find the BMW S1000RR’s heated grips and cruise control on its pure-bred Italian rival.

What you will find is even more performance. The 65-degree V4 unit keeps its 999cc capacity but is extensively modified, and joins the 200bhp+ club with a claimed maximum output of 201bhp at 13,000rpm. It has a new airbox and revised variable-length intake trumpets, larger inlet valves, exhaust valves that are also now made from titanium. Forged camshafts are lighter, as are the new Pankl conrods, smaller crank pins and the transmission system’s narrower gears. 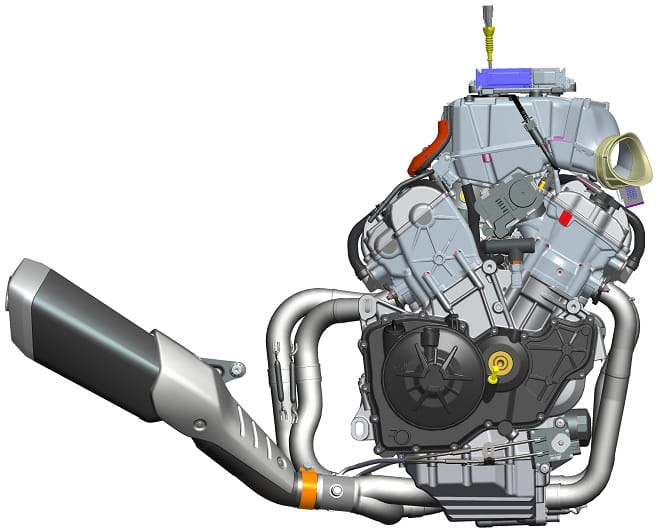 Aprilia’s race division is now headed by Romano Albesiano, who was in charge of the RSV4 project from its beginning, so it’s no surprise that much of the new model’s technology comes straight from the track. The engine also has CNC-machined combustion chambers that allow tighter tolerances, a new sump and redesigned crankcases to reduce friction from its oil, and a new exhaust system with larger, 36mm (from 33mm) diameter downpipes that are squeezed into the same space in the ultra-compact bike.

Chassis changes are less extensive, and are mainly aimed at maintaining stability with the increased power. The RSV4 has long been unique in having adjustable engine mounts, initially to benefit World Superbike racers, and this is now used to lower the centre of gravity by bolting the V4 unit in its lowest position. The swing-arm is lengthened by 4mm (with potential for an additional 9mm), and the steering geometry is quickened by slightly reduced trail. Overall weight is down by a few kilos, to just 190kg without fuel.

Advanced electronics have been one of the RSV4’s main assets since the APRC (Aprilia Performance Ride Control) model of 2011, and the system is updated to include Bosch’s latest lean-angle sensor. The traction control and anti-wheelie control are recalibrated, you still get launch control and a quick-shifter, and the brake system now also includes a Race ABS system with its Brembo Monobloc calipers. 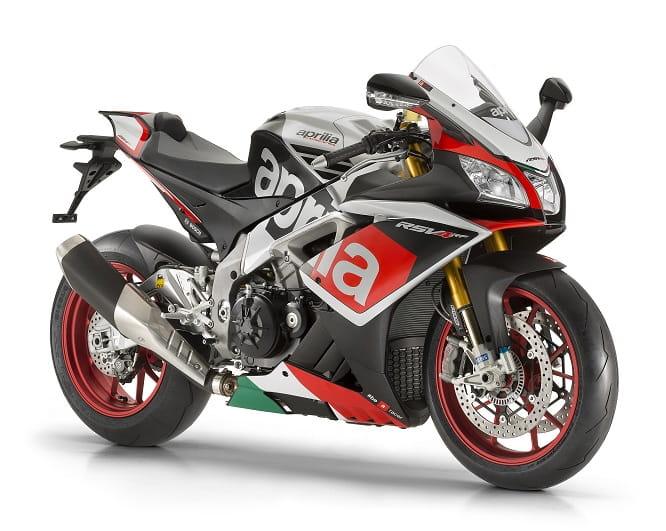 The RSV4 RF also has the very high-tech option of what Aprilia calls V4-MP, the MP standing for Multimedia Platform: basically a GPS-enabled telemetry system that connects the bike to a smartphone. This allows not just downloading of data after riding (though it does that) but also precise fine-tuning of traction control and anti-wheelie for individual racetrack corners, provided the circuit in question is on Aprilia’s list of major circuits.

Misano is on the list, and I didn’t need the telemetry to tell me that the RSV4 was mighty rapid as it charged down the kinked back straight with a glorious V4 bark from the stubby silencer by my right boot. Revs built with fantastic speed, heading for the redline with thrilling rapidity as I flicked through the box with the quick-shifter, which slightly surprisingly doesn’t work on down-shifts, like those of the S1000RR and Ducati’s 1299 Panigale. Aprilia say this RSV4 is 16bhp more powerful than the previous model, which sounds about right. 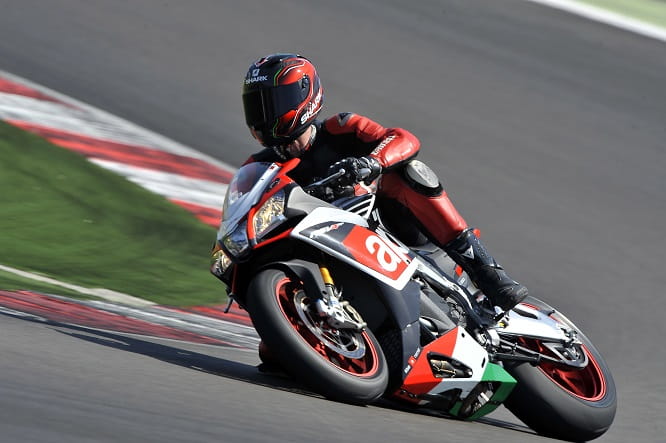 There was heaps of midrange grunt too, so the Aprilia pulled hard even when I exited some turns from around 8000rpm, kicking smoothly and with superbly flawless throttle response for such a powerful bike. The riding modes have been adjusted to give a new Race mode that has smoother delivery. It does just that but the difference is not dramatic, and some riders might prefer Track mode’s slightly increased engine braking.

Handling was as good as you’d expect of such a light, race-developed bike with top quality suspension, though only after the Aprilia mechanics had tweaked the suspension to suit my larger-than-Italian-test-rider sized body. In the first session the bike was far too soft for my height and 87kg weight, and some extra shock preload and more damping at both ends had it handling infinitely better by the third session.

That was when I got the benefit of the V4-MP system for the first time. In the second session the bike hadn’t been much fun, sitting down too much at the rear under acceleration, its worn rear Pirelli Supercorsa sliding and sending the traction control working too often by the end of the session.

Back in the pits, it was a real eye-opener to be able to play with the smart-phone on its mount at the steering head, and fine-tune the traction control, setting a lower base level, then adjusting it further for several turns including the long right-hander where the bike had been sliding most. The wheelie control can also be adjusted through its three settings in similar fashion; one rider found it useful to turn it up for the last bend, where his bike’s wheelies had been setting off a weave on the following pit straight. 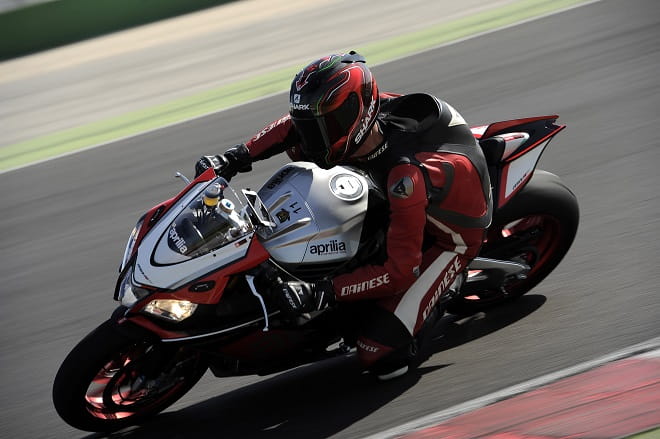 My bike initially weaved too but was impressively stable once I’d firmed it up, even feeling rock solid through the super-fast right-hand kink in the back straight. The Aprilia also steered with the superbly agile yet planted and confidence-inspiring feel that I recalled from the previous model, its front end giving massive amounts of feel, at least once I’d added some rebound damping to stop the forks moving as I let off the brake.

The stopper was predictably powerful, the Race ABS working so well that I couldn’t feel it working, in contrast to the previous model’s less than cutting-edge system. The RS4V doesn’t have cornering ABS like the 1299 Panigale, or a linked system like Yamaha’s new R1, but it certainly slowed mighty hard. And gripped hard too, at least until that Pirelli Supercorsa SP got worn.

What even this top-spec RSV4 also doesn’t do is follow the S1000RR and Panigale with the option of semi-active suspension. As with the lack of cornering ABS, there’s a reason for that: Aprilia haven’t yet found the system to give a benefit in lap times, so by their strict criteria there’s no reason to use it.

That’s a very hardcore approach that won’t suit every rider, not least because many RSV4s are likely to spend the majority of their lives on public roads. But you have to admire Aprilia’s no-prisoners attitude. And the result is a stunningly fast and track-focused machine that gives the firm every chance of earning more super-sport comparison test victories, as well as more World Superbike glory.