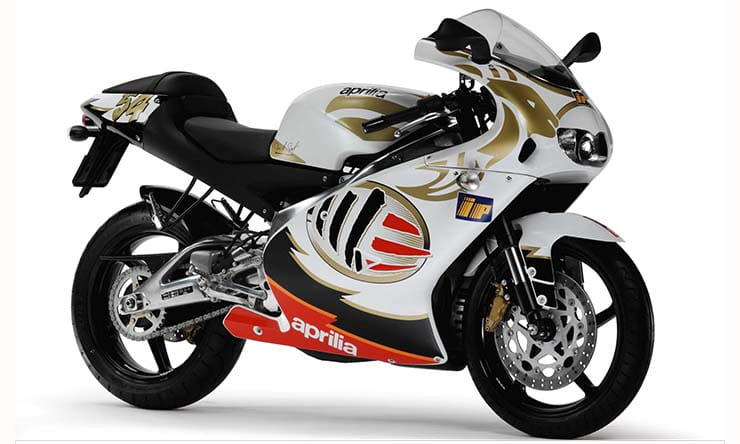 If you are stuck on a 125cc bike for a year or two, you might as well have the one that offers the most fun, and that means the legendary Aprilia RS125. This two-stroke stink wheel has been terrorizing the streets ever since it first coughed its way into life in 1992, replacing the equally polluting AF1 125. But the RS125 is far more than just a learner legal bike, it is the stuff of teenage dreams, a springboard into MotoGP (possibly) and a thoroughbred sportsbike for adolescent kids the world over.

The key to the RS125’s popularity has always been its performance. Or more precisely, it’s perceived performance. Despite arriving from Italy in learner legal 15bhp form, getting more power out of an RS is simple and when you are 17 the ability to hit 100mph is paramount. A few tweaks here and there and not only does the speed increase, the chassis’ potential is also unlocked. And your insurance becomes invalid…

The RS not only looks like a sportsbike, it performs like one. The legendary RS125 Superteen Challenge has launched the careers of the likes of Casey Stoner, Cal Crutchlow and Bradley Smith to name just a few who have made it to MotoGP, so its sporting ability can’t be questioned. On the road this means a flurry of revs and corner speed need to be combined with a complete lack of self-preservation and a desire to keep the throttle open no matter what, but that’s what makes the RS125 so much fun. And even if you don’t want to go bonkers, the RS125 remains the best looking 125 in the car park, and that means everything to any teenager desperate to impress.

The list of faults and potential issues on a used RS125 is fairly substantial, which isn’t surprising from a 125cc two-stroke learner bike that lives its entire life on the red line. For a start you have to consider its legality. As a 125cc learner legal bike, it should only produce 15bhp, but de-restricted RS125s can produce in the 34bhp area. The restrictions are in four stages on post-2003 bikes – an electronic one in the ECU, a lack of power-valve system, catalytic converter in the pipe and a smaller carb. The ECU can be overcome by breaking into the ECU (the internet is full of 'how to' guides) while the power-valve needs to be physically installed. If there is a blanking plate located above the exhaust manifold then you are lacking the power-valve (complete kits can be located used for around £100 on eBay while a pneumatic valve is £120 but requires drilling the cylinder) and the bike should be road legal. Derestricted bikes are far more fragile than road legal ones and are best avoided, while several bikes that have spent their life in the aforementioned Superteen championship also crop up in the market - occasionally returned to road use. These will have had a hard life and are also best avoided.

The RS suffers quite a lot from electrical faults down to really poor wiring, so always check that all the electrical items such as the dash, horn, lights and so on work. If the bike has been left standing then the carb will probably need a rebuild as they get gummed up or the spark plug will need changing, although don’t just assume this is the issue if the bike fails to start. Never buy an RS that you haven’t heard run as you are asking for trouble. A bike that stutters or runs rough will generally just need a bit of setting up of the float height or its carb rebuilding, a non-runner may have far more serious issues. When the bike is running, listen for any knocking sounds from the engine that hint at a big or small end going, and look for any leaks from the radiator. Crash damage is very common on an RS, so expect a few scratches. Check the frame is straight, the lock-stops aren’t smashed off and that the wheels aren’t buckled and the radiator is intact. Complete new fairing sets cost less than £350 from China and will make a bike look like new, which is great news but means you need to be very wary of a really tidy looking bike in a modern race rep paint scheme! Check engine and frame numbers well as theft is always an issue on popular 125s and give the bike an HPI check to see if it has been involved in any major accidents and previously written off.

The RS125 was first introduced in 1992 and early bikes are easily identified by their rectangular front headlight. This model was updated in 1996 when a revised Rotax motor was introduced alongside a new look, before the bike received yet another facelift and more technical updates in 1999 (pictured top). The ‘bulbous’ look of this generation apes the bigger RS250 and is the one that most riders remember. This bike continued fairly unchanged until 2007, when it gained an RSV-style angular fairing and radial brake caliper (bottom picture). This final two-stroke RS125 received a few very small technical changes but was essentially unaltered until emissions laws killed it off in 2012. Over the years there have been various race rep paint schemes such as the Chesterfield, Banacia and 'Spain’s No1' as well as the traditionally lurid stock Aprilia colours! The later bikes are generally considered more reliable and it is only tuned ones that tend to grenade themselves. That said, don’t skimp on quality two-stroke oil or it will eat pistons. 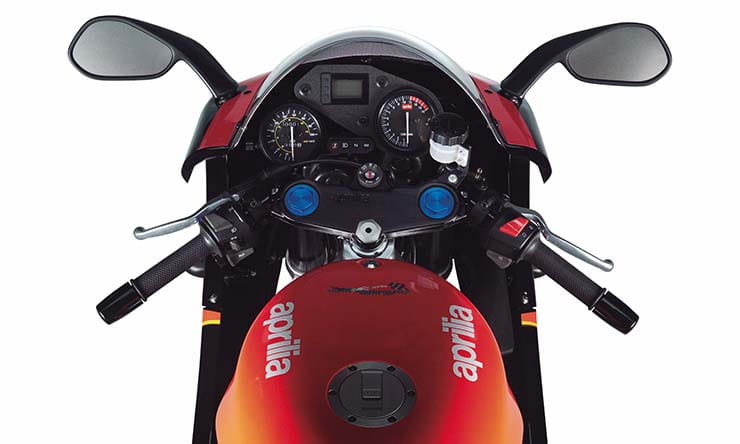 A spares or repair (which is sales talk for completely knackered) RS125 will cost you under £700, avoid these at all costs. You can’t bring them back to road legal and they are only good for spares. A good, running and MOTed, RS125 in the old ‘bulbous’ fairing costs between £1,500 and £2,000 in a dealers while prices for the latest RSV-style machine start at £2,000 and go up to about £3,500. Expect to pick up a bike for around £500 less in a private sale than in a dealers, but you are paying less for a lack of warranty, so be extra cautious! If you are boring, a very reliable RS4 four-stroke can be had for around £2,500 but it doesn’t smell half as good. 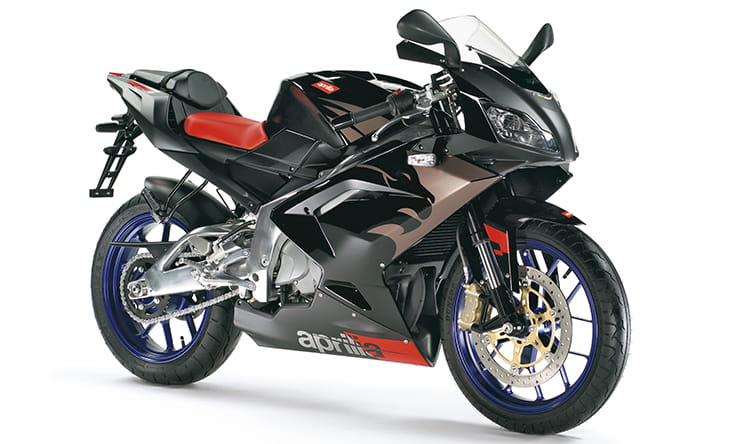