Pol Espargaro to remain with Tech 3 for 2016; no news for Smith 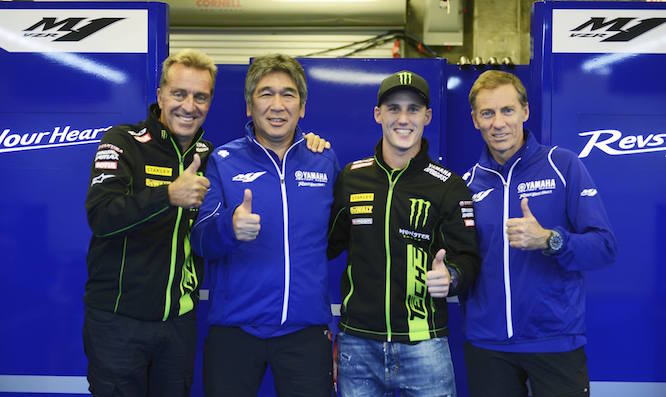 Pol Espargaro will remain with Monster Tech 3 Yamaha for the 2016 MotoGP season, Yamaha have announced today.

The Spaniard has extended his contract with the Yamaha factory to ride in the Herve Poncheral-run satellite squad through 2016.

The move comes after he obliterated the Suzuka lap record on his way to pole in the prestigious 8 hour endurance race last month, before going on to win the race alongside current MotoGP team mate Bradley Smith and Yamaha test rider Katsuyuki Nakasuga.

“I’m happy, because renewing my contract with a factory like Yamaha is always going to be fantastic,” said Espargaro on the deal.

“Yamaha gave me the opportunity to make my debut in MotoGP and together, I think we had a really good first season. This year we are working hard to improve our results that have not been as strong as we would have liked at this point of the year. However, next season there will be some important changes in the category, such as the alterations to the technical regulations and especially, the changing of the tyre supplier. From my point of view, the less you change with regards to the team and the bike, the easier it will be to adapt to all of this.

“Despite some tricky moments this year, I know the bike and I know I can continue to work well together with Yamaha and Tech3 in order to achieve our goals. This announcement is also fantastic following the success at Suzuka, where we undertook some really good work together that concluded in the victory which was great for Yamaha and also for my confidence. Therefore, I hope that this result and the renewal of my contract will help me for the nine races that we still have left in 2015, which is the most important thing for me to focus on right now.”

The announcement comes despite Espargaro’s tough start to the 2015 season. The Spaniard currently sits ninth in the world standings, three places behind team mate Bradley Smith who hasn’t heard whether or not his contract will be renewed for next season.

"I've made it very clear to my team and to Yamaha that I want to continue," Smith said regarding a 2016 deal. "There's not the same enthusiasm coming the other way however."