Kevin Schwantz RGV500 to be restored at Motorcycle Live 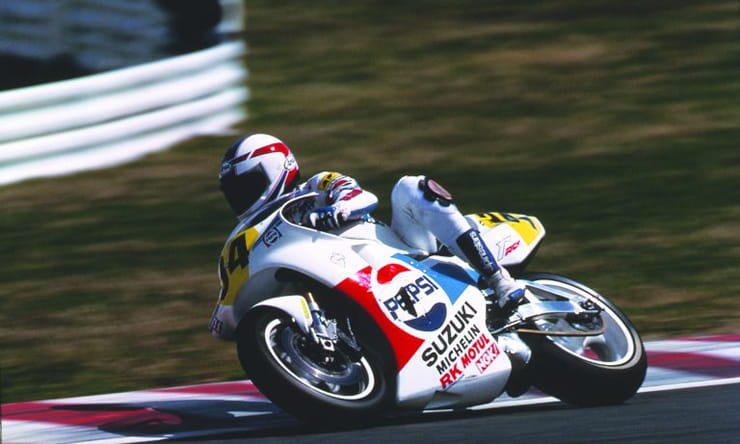 For some years now Suzuki has used Motorcycle Live as a platform to promote its Vintage Parts Programme. For Motorcycle Live 2017 the team is going all out to restore Kevin Schwantz’ original 1989 Pepsi liveried two-stroke Grand Prix bike.

Previous shows have seen the Team Classic Suzuki crew rebuild a TL1000s, Suzuki GSX-R750 and last year the stunning GSX1100SD Katana that went on to race at the Endurance Legends event, ridden by Jamie Whitham, Steve Parrish and Michael Neeves.

The RGV500 is a different challenge for the team as all the bikes built before have been road bikes for which Suzuki still holds a massive selection of parts. The Schwantz machine is a bespoke racer, with no cross-over parts to a road-going cousin. As with its other builds this is unlikely to be the first time the team will have had hands on the bike; you can be sure the Suzuki has been with them for weeks while they rehearse the build and look for any potential problems but still, a rebuild of a motorcycle so famous in the full glare of the public eye is something to behold. If you have not been to see the bikes they've built before you really should take a look.

Suzuki GB aftersales marketing co-ordinator, Tim Davies, said of the project, “Kevin Schwantz is still, undoubtedly, a legend among motorcyclists in the UK; we saw that with his presence at British Grand Prix at Silverstone earlier this year. For us at Suzuki, it’s no different, either, and his 1989 RGV500 is an iconic machine that we’re looking forward to restoring.

“We’ve built or restored a number of bikes at Motorcycle Live in recent years but this is the first time we’ve restored a legendary racing machine like this. It’s a new challenge, and also something different for visitors to the show, while still allowing us to highlight just how many genuine Suzuki parts can be ordered through the Vintage Parts Programme.”

Suzuki’s stand will also see the return of its popular ‘Elbow down’ feature, which gives visitor’s the chance to swing a leg over a Suzuki MotoGP bike and (almost) experience the feeling of dragging an elbow at over 60° of lean. The public can of course also see all of the current range and any new-for-2018 bikes.

The Suzuki stand is situated on stand 3A20 and will be serving free tea and coffee to those looking to take a rest from walking the halls.

Motorcycle Live runs from November 18th to 26th. For more details about the event or to buy tickets please click here.